Roguelikes, by the nature of the genre, are all about emergent storytelling. While you will find some that attempt to tell a directed story (the excellent Hades), many of them are let down by the fact that most roguelikes include a large amount of procedural generation. It's finding that balance between something directed and something emergent that Gods Will Fall is looking towards.

The way Gods Will Fall works around this is by procedurally generating the difficulty of each level within the game as well as the eight Vikings that will survive your ill-fated trip to the island where the gods live and take up arms against the gods that inhabit the island. Why are they fighting their gods? They've become too demanding. They've been callous and cruel, and they're making the people suffer. Only the people have grown, matured, and it's time for them to overthrow those that would lord over them, demanding fealty. 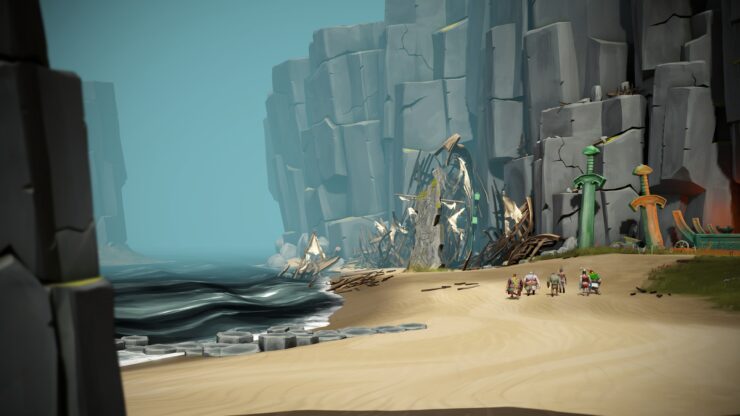 So they set sail. Then the weather takes a turn for the worst. The gods themselves haven't shown themselves, but they have made their wrath known. They are a merciless bunch. Either way, eight warriors wash up on the shore of the island, and it's down to you to control these warriors and defeat the ten gods. Eight warriors fighting against and picking off ten malevolent and powerful creatures seen as deities, one by one? A fair fight, if I say so myself.

Only you don't get to control all eight in the fight. Each god resides in its own area, and when you get to that area, you select one of your warriors to venture in and fight. The way the emergent storytelling happens here is that there are a large number of positive and negative effects that can impact each and any of your warriors. This particular god you're going to fight, are they afraid of the tales they heard of the god as a child? If so, they may have a sizable hit to their vigour (health).

At the same time, they may be on a high; they could have a boost to their stats due to a personal vendetta. As you play through the game, a number of these stat changing elements will appear. This is particularly true if you go to fight a god and lose. Your character isn't necessarily dead, not that the warriors stood outside know this. One of them may get demoralised, see some stats fall, but another may be pushing to get revenge for their friend.

Only if they go in and they win the fight, they'll be able to walk out with any of the surviving warriors that went into the cave before and lost. It's a lovely sight to see your warrior coming out, after a successful trial, with four of his or her comrades in tow. They were thought lost, dead, but this isn't the case. Those who stood outside now let out a hearty cheer. One trial is complete; stats are raised, items are looted for future use and new weapons - level determined by the difficulty of the dungeon just completed - are obtained and can be equipped to your soldiers. 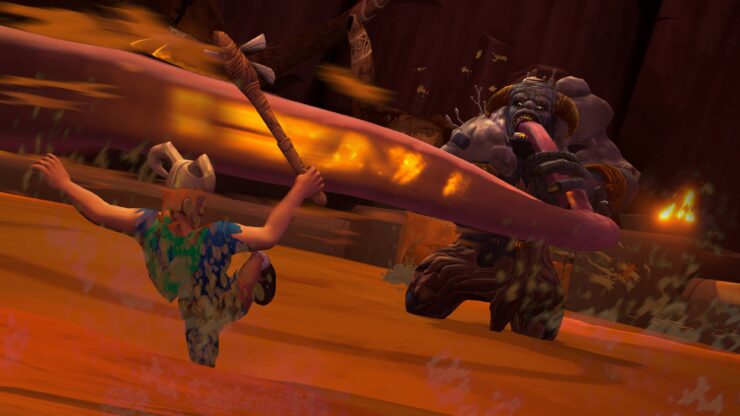 This is what makes Gods Will Fall stand out, at least to an extent, for me. Coming with this more limited and stats-oriented approach is also a very tactical combat style. There are four weapon types, with several usable items that can be picked up during a dungeon, or obtained following the completion of a dungeon. The main thing is that you're going to need to be very careful when fighting, your health can be depleted very quickly.

You'll be careful by sound, tactical, decision making. This will also be very much based on observation and pattern recognition. Dodging or blocking at the right time can be perfect for creating that perfect opening to take a good swipe at your enemy, now that they're off-balance. In addition to this, it will allow you to get in a few attacks to build up a meter that allows you to let out a mighty roar, also regenerating your health to the indicated amount on the meter.

This leans very much into the emergent nature of Gods Will Fall. You could be on your last bar of health, a mosquito having its way with you would be able to finish you off, you manage to get off a few quick swipes, you finish off your opponent and let out a mighty roar. Suddenly, your health is looking better. You're not back to your best, but you're feeling a lot more confident.

Can you take on the boss of this dungeon? It's not like you have much choice. The best part of Gods Will Fall is that each playthrough will see the difficulty level of the dungeons randomised. The layout, the design of the dungeons are always the same. The monsters found within will vary from game to game, with each dungeon essentially having ten difficulty levels.

You could enter one dungeon in your first playthrough, and it could be on difficulty level two, you're facing off against the easiest creatures for that area. The next time you start a game, you go there expecting an easy start - only it's at difficulty level eight. Now you're way in over your head. You're not prepared, you're under-equipped. Maybe you'll survive? It will be a hell of a lot harder than before. 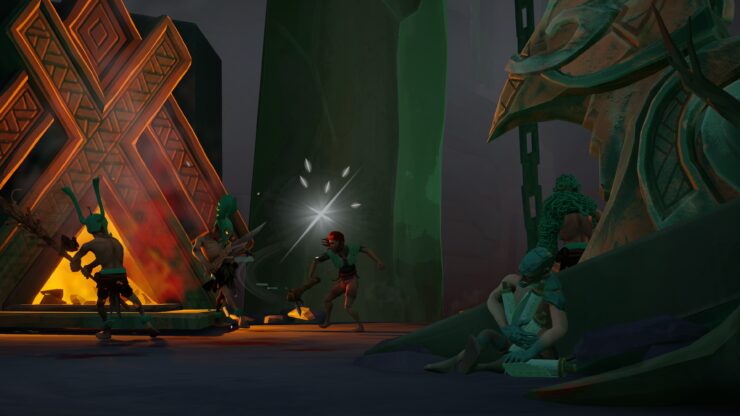 Developers Clever Beans (When Vikings Attack!, WipEout Omega Collection) are looking branch out here and, from a first impression, it looks like they'll be fine. Taking souls-like elements, procedural generation as well as fixed areas to allow for consistent worldbuilding, then working them all in a way that allows for emergent storytelling as you undoubtedly get attached to certain characters, it's a recipe for something engaging, to say the least.

Having had the chance to play through five different dungeons on Gods Will Fall, I can certainly see how this is going to work out as an enjoyably challenging game. The fact that each dungeon essentially has ten different difficulty levels, depending on how your playthrough pans out, could certainly make for an interesting challenge, especially if you happen to drop on a dungeon set to the hardest difficulty before you get the chance to gear up your team. Will it turn out as good as the potential it seems to have? We'll find out more when Gods Will Fall launches for the PC, PlayStation 4, Xbox One, Nintendo Switch and Stadia on the 29th of January, 2021.