First things first, this is a gorgeous motherboard. The previous X399 motherboards were impressive in their own right but look aggressive. This one feels more futuristic and the design scheme is meant to impress everyone, even the non-HEDT users. 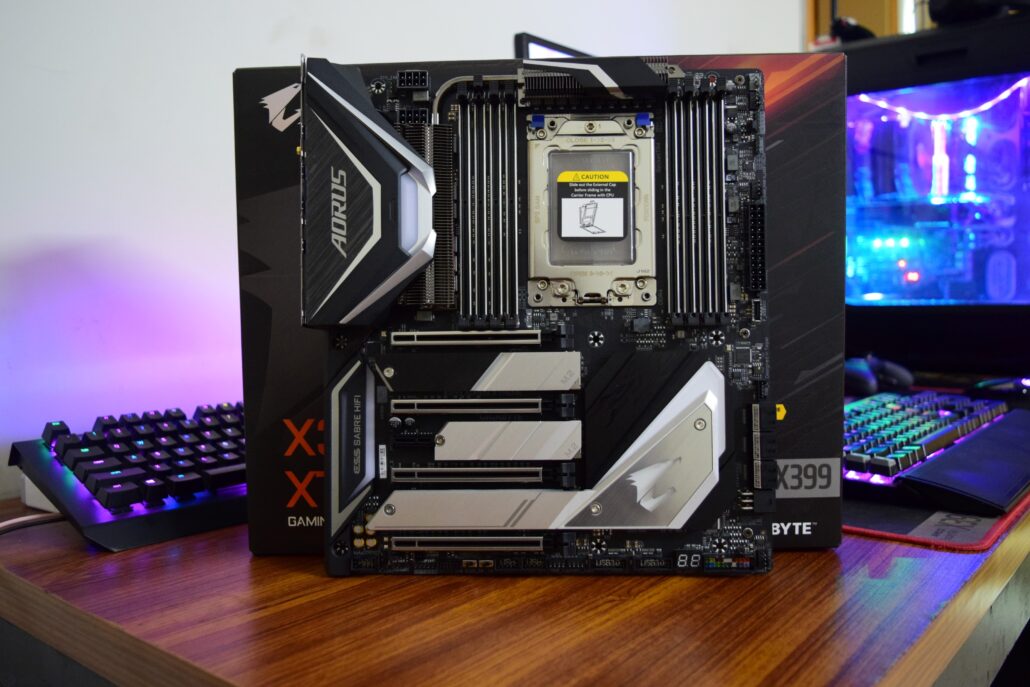 The motherboard comes with a futuristic design language that we kind of previously saw on the AORUS Z370 motherboards but this time, AORUS has taken it to the next level. AORUS has also chosen the silver and black color scheme with slightly brushed silver accents that give a good touch on this motherboard and it looks great. 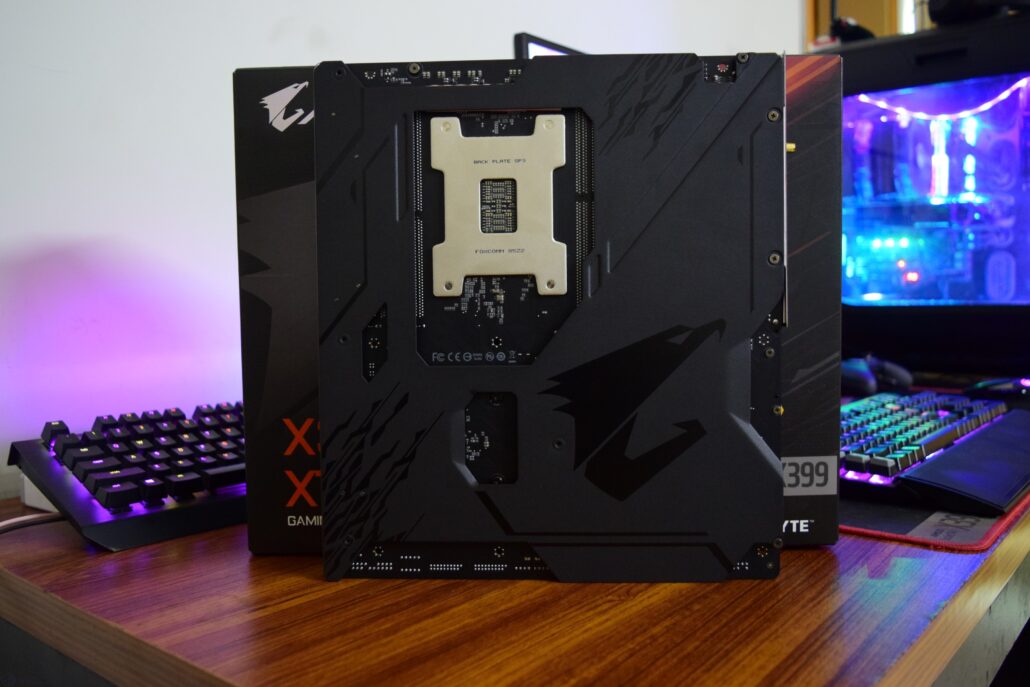 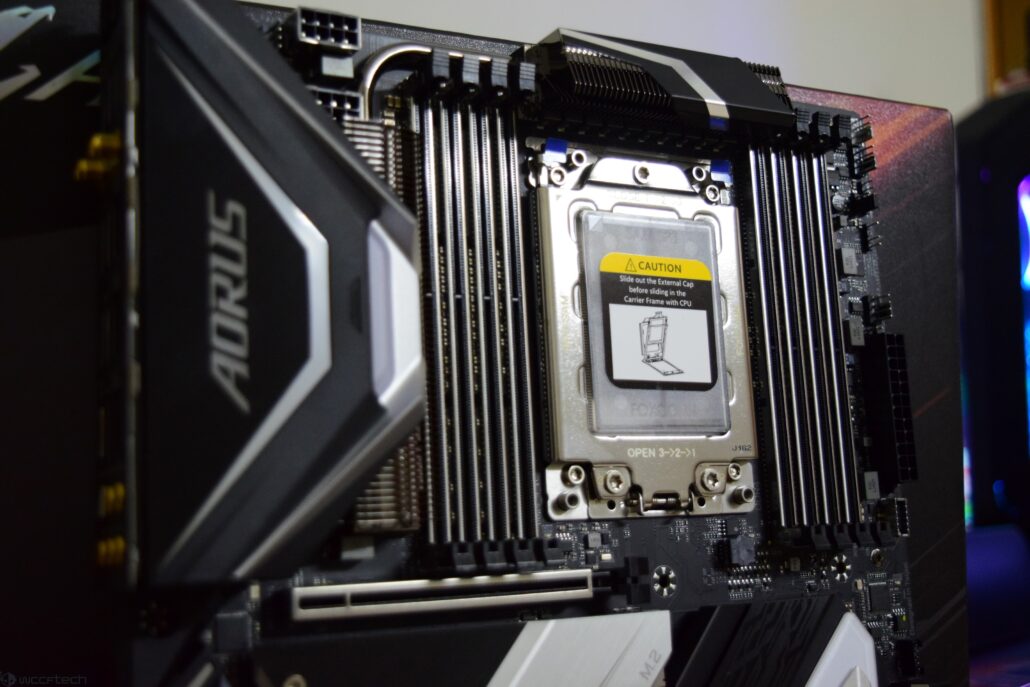 Talking about the socket, it is also the largest ever designed for a consumer grade motherboard and the number of pins inside the socket is mind-blowing. You can fit in almost four consumer Intel CPUs in the socket (although they won't work). 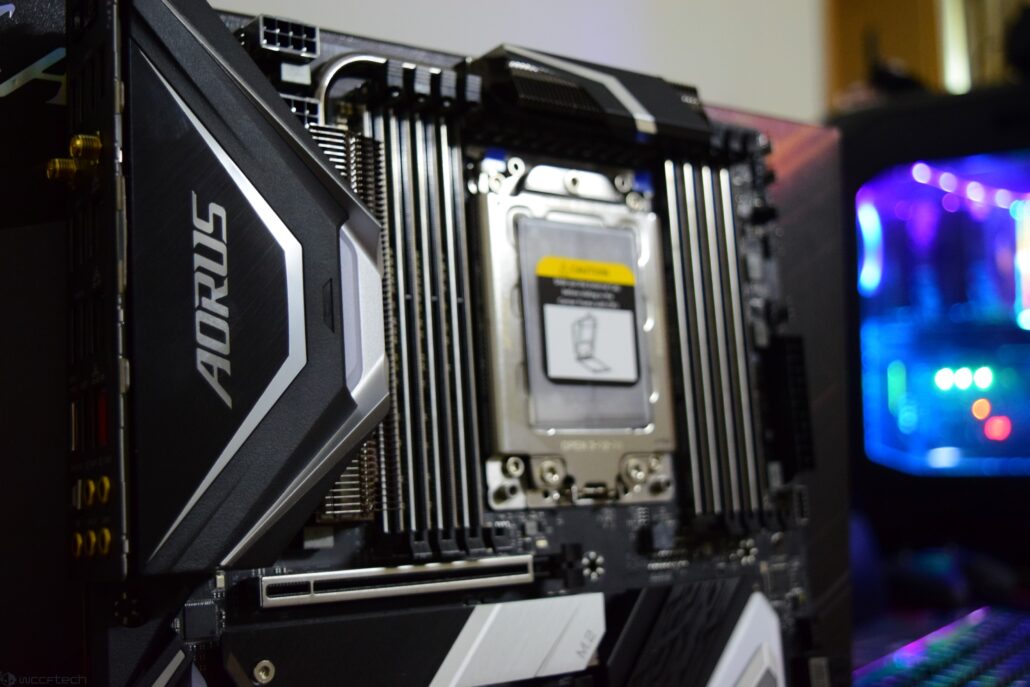 Around the socket are two DDR4 DIMM slots which can support quad channel memory with clock speeds up to 3600 MHz (OC+). The system is designed to operate both non-ECC and ECC (UDIMM) memory and up to 128 GB in capacity. The motherboard supports XMP memory modules like the ones I tested the board with. 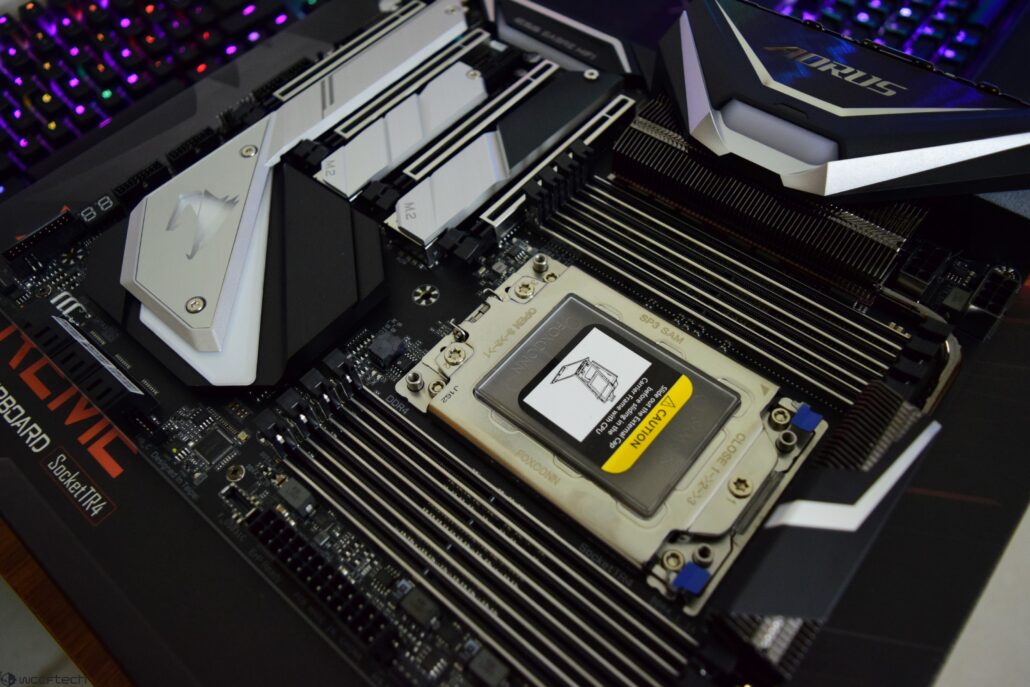 Scattered around the CPU socket is 10+3 phase power delivery system that uses the IR Digital PWM unit for voltage and power regulation. The power delivery system is a combination of high-quality components that includes 50A IR3578 ICs for each vCore and SOC phase, an enhanced MOSFET design which helps with enabling higher current capacity, and server level chokes which reduces the power loses to the CPU VRMs, allowing for more stable operation and clean power being circulated to the processor.

The motherboard is supplied power through a 24 pin ATX connector while the CPU socket is running by a dual 8 pin connector configuration that is located right next to the I/O cover.

This is enough to feed juice to the high-end 32 core Ryzen Threadripper CPUs. Overclocking would be a breeze on high-end motherboards that feature these splendid refreshed designs for 2nd Gen Threadripper processors.

The motherboard uses premium two top of the line aluminum fin-based heatsinks which make direct contact with the power delivery unit through what AORUS calls their Direct Touch heat-pipe system. There are multiple high thermal conductivity pads on the motherboard and talking about the front, there are at least four which ensure effective heat transfer.

AORUS has been outfitting their recent motherboards with really good quality heatsinks as seen on the AORUS X470 Gaming 7 and now the AORUS X399 Xtreme. This effectively leads to better cooling on the motherboard which competitors should take note from.

AORUS is also featuring active cooling on their X399 Xtreme motherboard. While I have noted that some motherboard makers are going for single fan cooling solutions or offering kits for their old X399 motherboards, AORUS is offering a dual fan system which includes 30mm fans throwing air directly towards the MOSFET heatsink. You may not have to worry about the noise being output by these fans as they are temperature aware.

In idle mode, the fans will run at lower RPM or shut down completely and when the board is being pushed to the limits, the fans will automatically adjust based on the VRM temperatures. During my testing, I noted almost no noise from the fans while at overclocked speeds, the fans did get a bit RPM heavy but still, the noise levels were very under control. 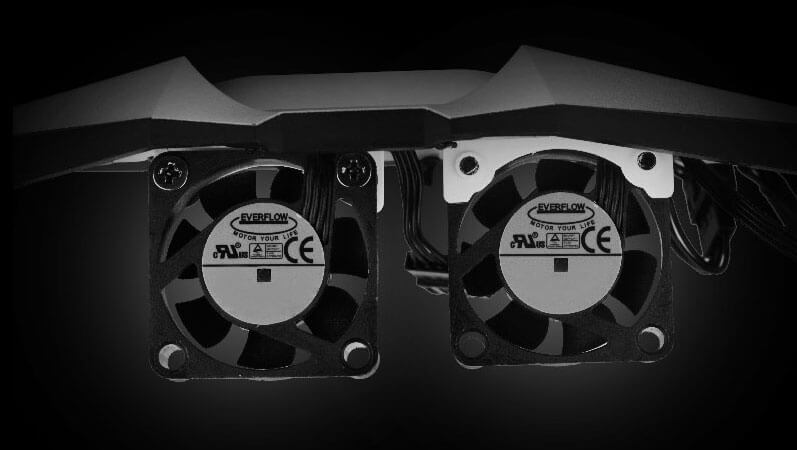 The cooling system on the AORUS X399 Xtreme is some of the best I have seen on a high-end board and you will see the results in my tests below.

The AMD X399 chipset is hidden beneath a metallic heatsink which is etched with the AORUS logo. The PCH heatsink has much functionality outside of just offering to cool to the third party chipsets and PCH, it comes embedded with RGB LEDs which are stunning and also extends as an M.2 heatsink which is very useful. 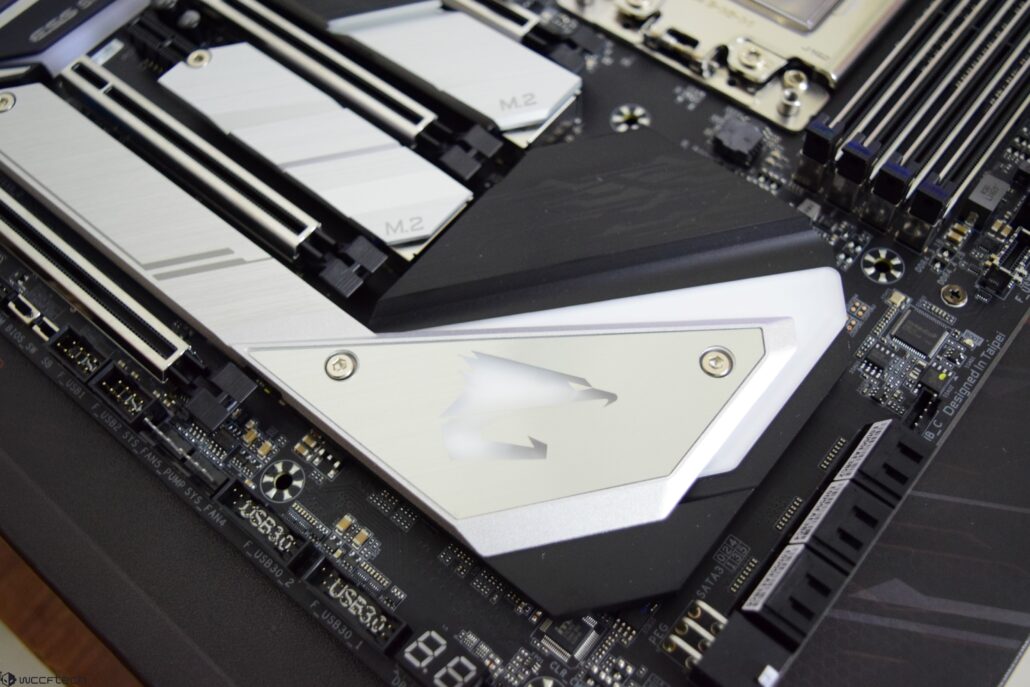 Just right below the motherboard socket, I can spot a small BIOS chip which is actually a dual BIOS design which is a key feature of the motherboard. For those whose motherboard may go haywire after a certain settings within the BIOS, you can easily switch to the reserved BIOS and revert the settings for easy configuration and tweaking. 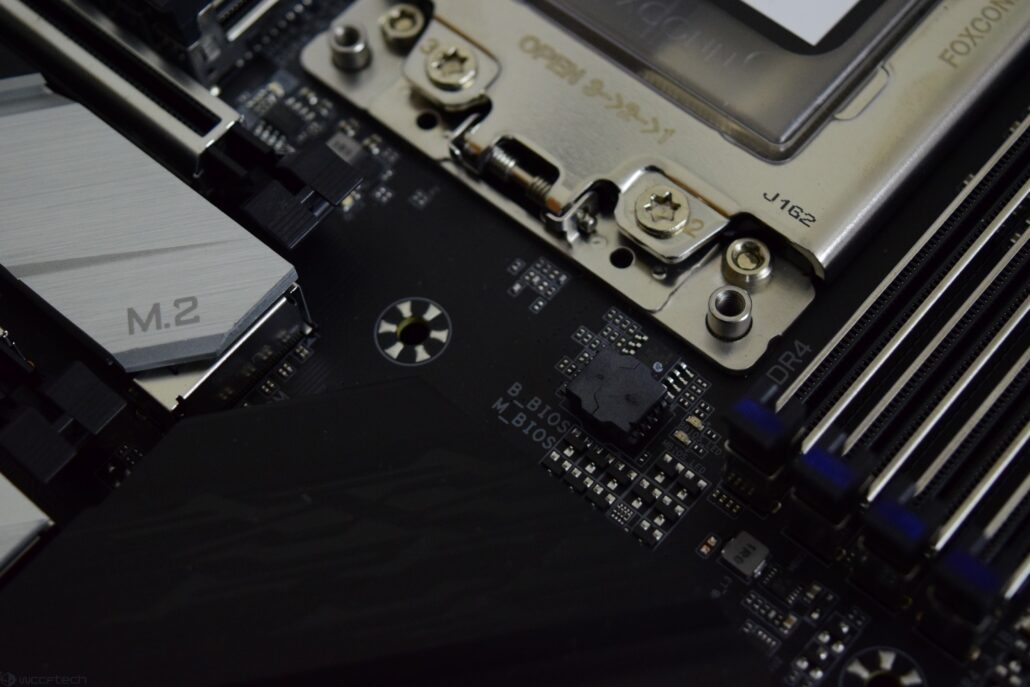 In terms of storage, we are looking at 6 SATA 3 6Gbps ports which support RAID (0,1,10) and has been free by AMD for a while now. Right next to the SATA ports is a 6-pin power connector that would come to use in PCIe heavy enivronments. 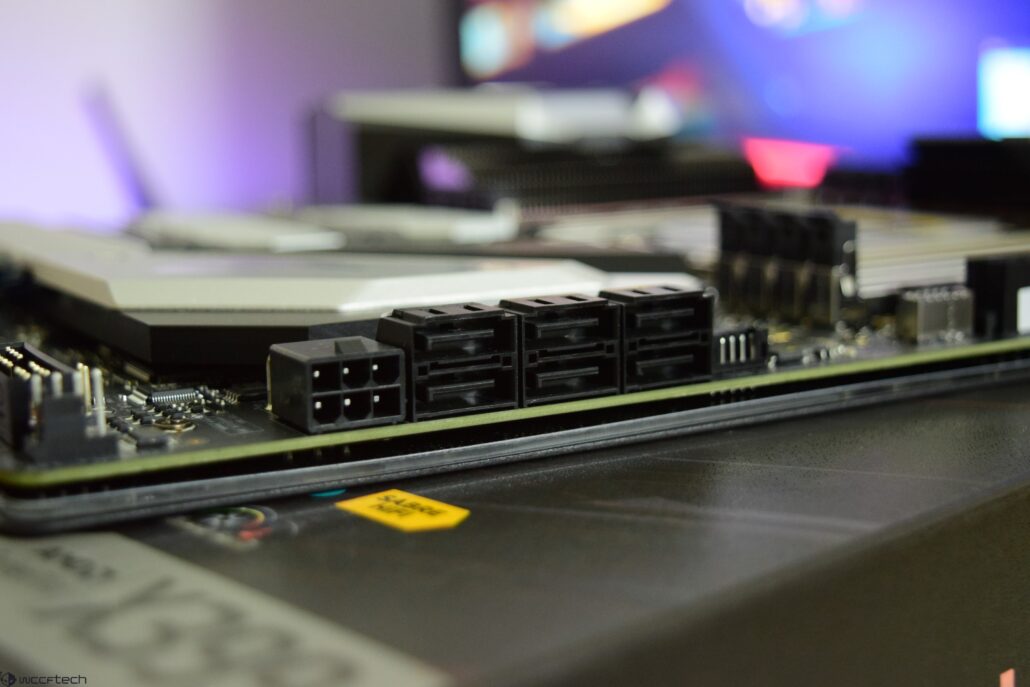 A single USB 3.1 (Type-C) Gen 2 connector is seen on the motherboard, underneath the EPS power connector. The front panel header is useful for connecting to modern chassis. 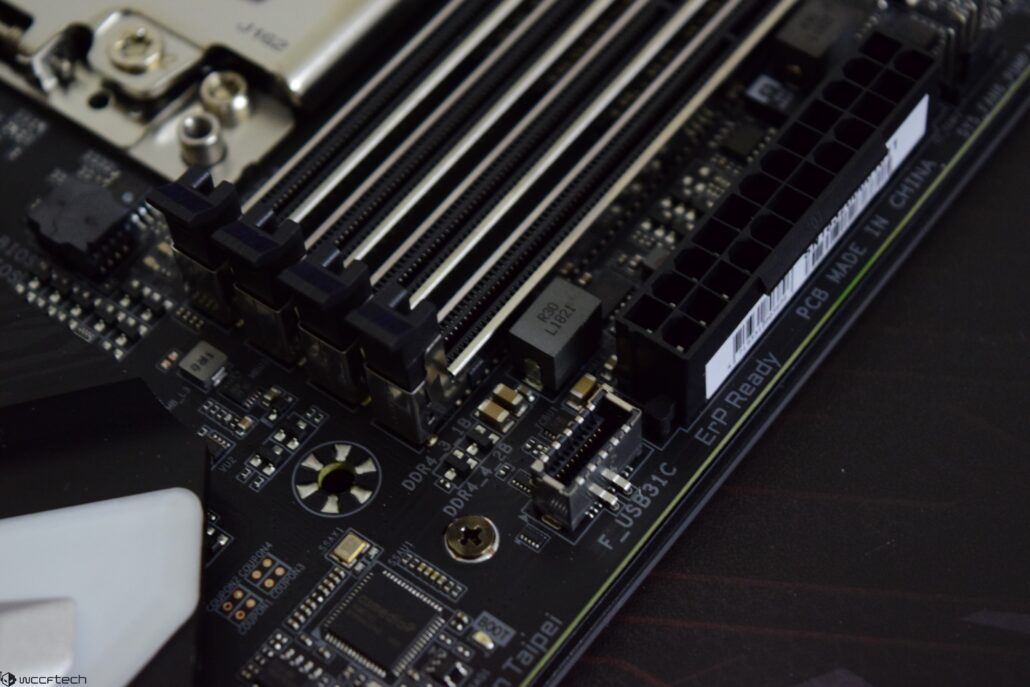 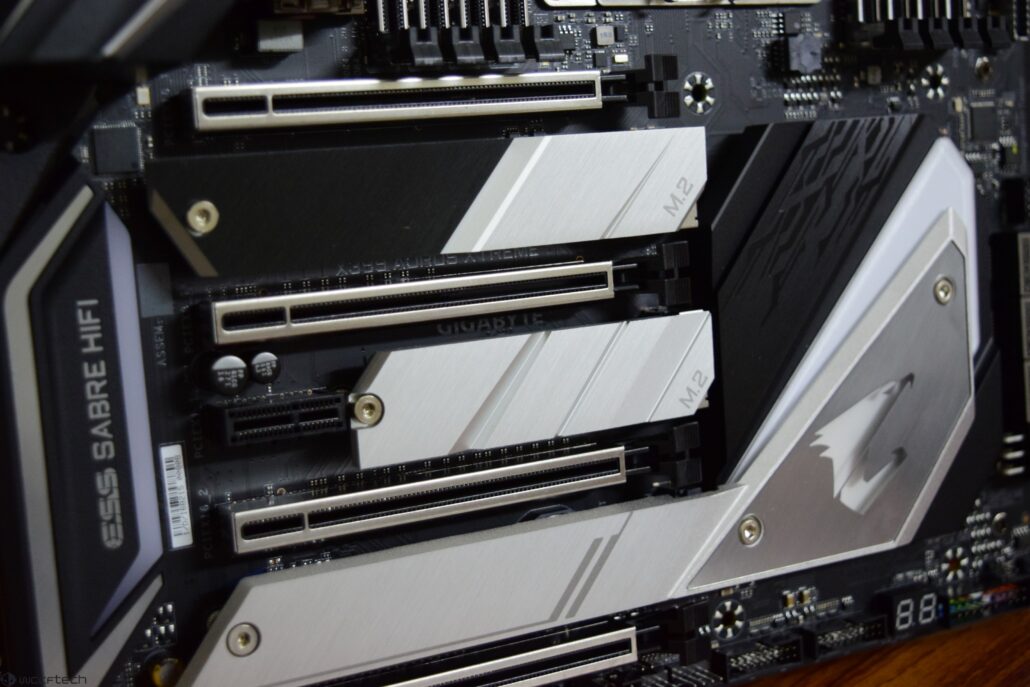 AORUS is using the latest Ultra Durable PCIe Armor on the PCI-express slots which adds more strength to the slots when using heavy graphics cards. The feature not only adds a stainless shielded cover to the PCIe slot but also provides more anchor points for extra strength against higher retention force. 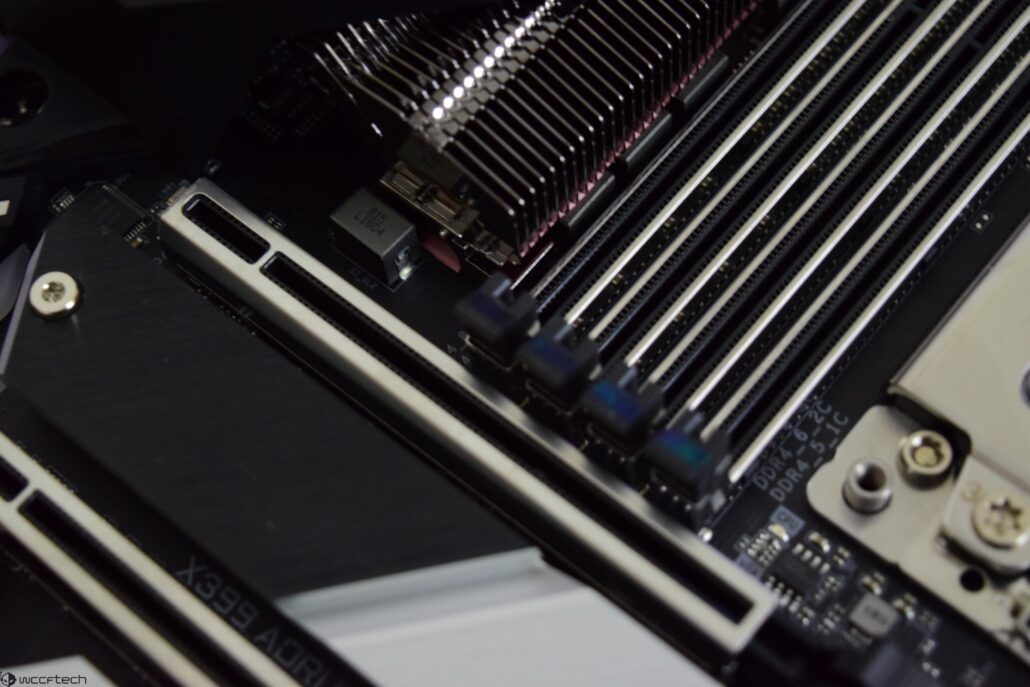 The motherboard can house four-way SLI and Crossfire GPUs. Whether if those are practical or not is up for debate but considering the use case of this motherboard, we can see some workstation heavy enthusiasts going for quad way NVIDIA Quadro or AMD WX series graphics cards in a system designed with such a high-end CPU and motherboard.

Two of the M.2 slots are protected by Ultra Durable shield cover while one is left as it is.

As you can see in the pictures below, all three M.2 Thermal Guards come with a large contact pad which are ideal for running a high-end M.2 storage solution. The contact pad is protected by paper so once removed and used, you might have to change it again to be as effective as the first time. 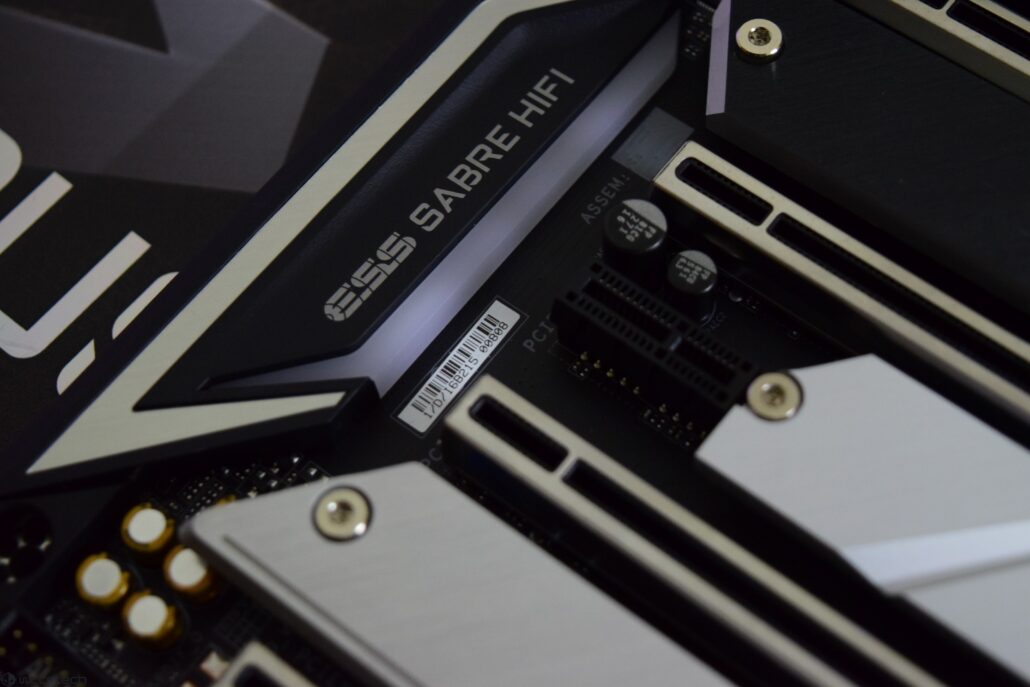 AORUS is running the ALC1220-VB, Realtek's high-end HD audio codec, on this motherboard that comes with ALC1220 120dB(A) SNR HD Audio and Smart Headphone Amp automatically detect the impedance of your head-worn audio device, preventing issues such as low volume and distortion.
New VB series audio controller stream your voice to the world vibrantly with both front/rear microphone SNR up to 110/114dB(A).

AORUS AMP-UP Audio now offers ESS SABRE with a DAC that adopts the concept of a high-end audiophile sound system design into a microsystem within the motherboard. The 32-bit HyperStream architecture to deliver up to 125 dB SNR and -112 dB Total Harmonic Distortion plus Noise (THD+N) ensuring audiophile quality sound all the way to the headphones. It also supports the most popular high resolution and lossless audio formats including FLAC, ALAC, AIFF, and WAV. The AORUS X399 motherboards use high end, Japanese branded Nichicon audio capacitors. 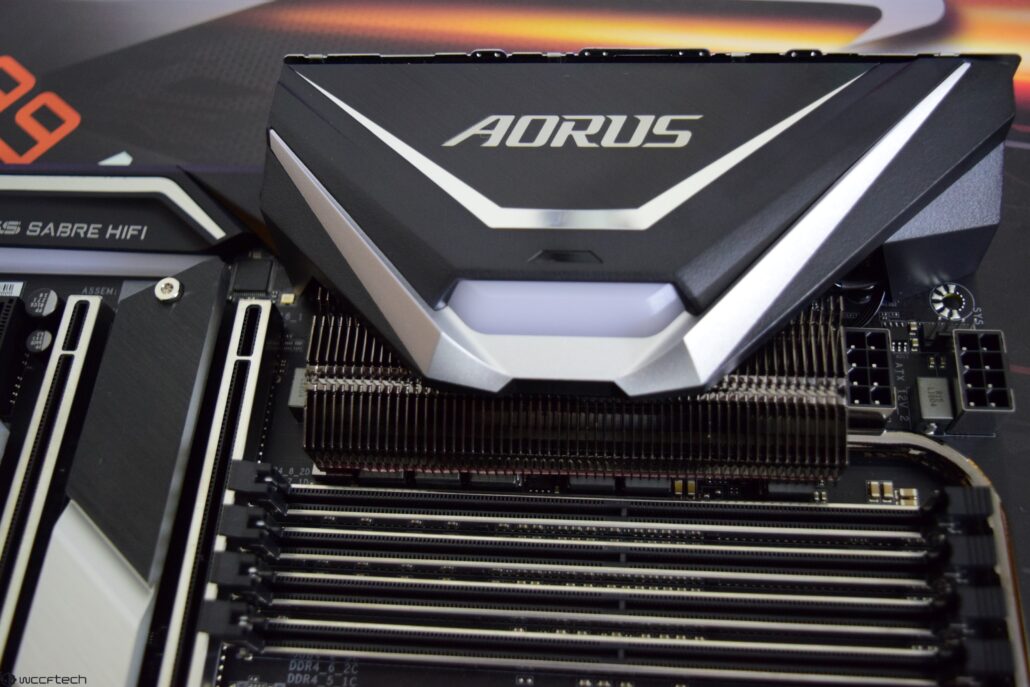 The I/O cover looks great with embedded RGB and hiding the active fan cooling underneath it. The AORUS logo and the fine lines look nicely designed. What's more interesting is the pre-mounted I/O shield which saves a lot of hassle when building PCs. It has been my point since last year that this should be a standard on all motherboards or at least the higher end ones. 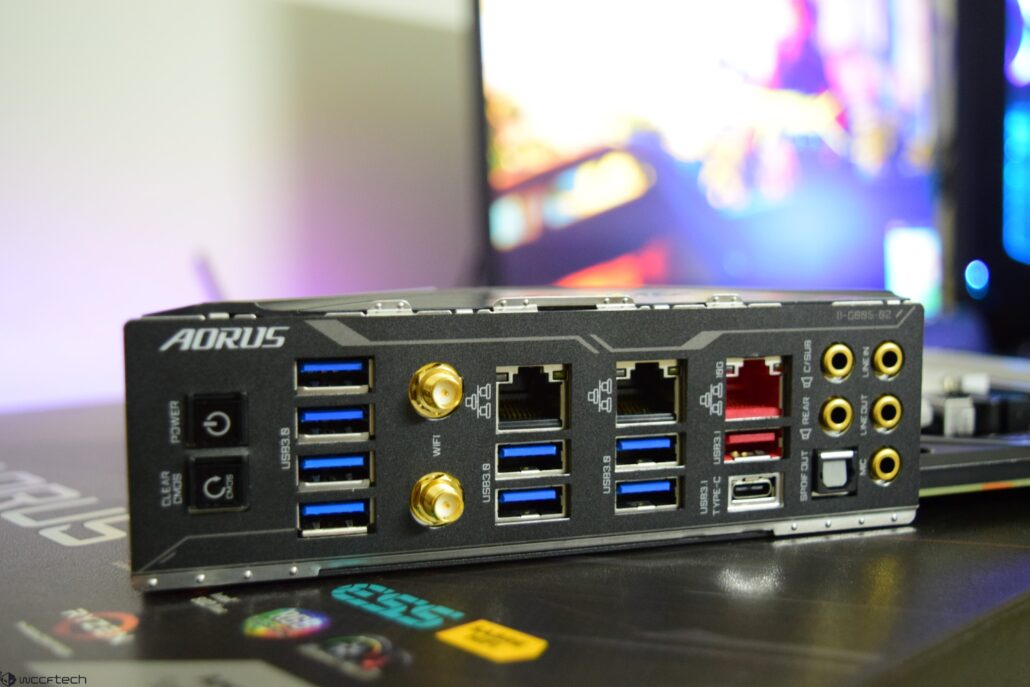