The graphics card is really big but not the biggest from the ones I have tested. The card measures at 314 x 132 x 53 mm and takes up 2.7 slots worth of space for installation. You would have to keep in mind the height when going for a dual card solution as your case or motherboard PCIe slot combination may not allow such setup. The cooling shroud extends all the way to the back of the PCB and it requires a casing with good interior space for proper installation. 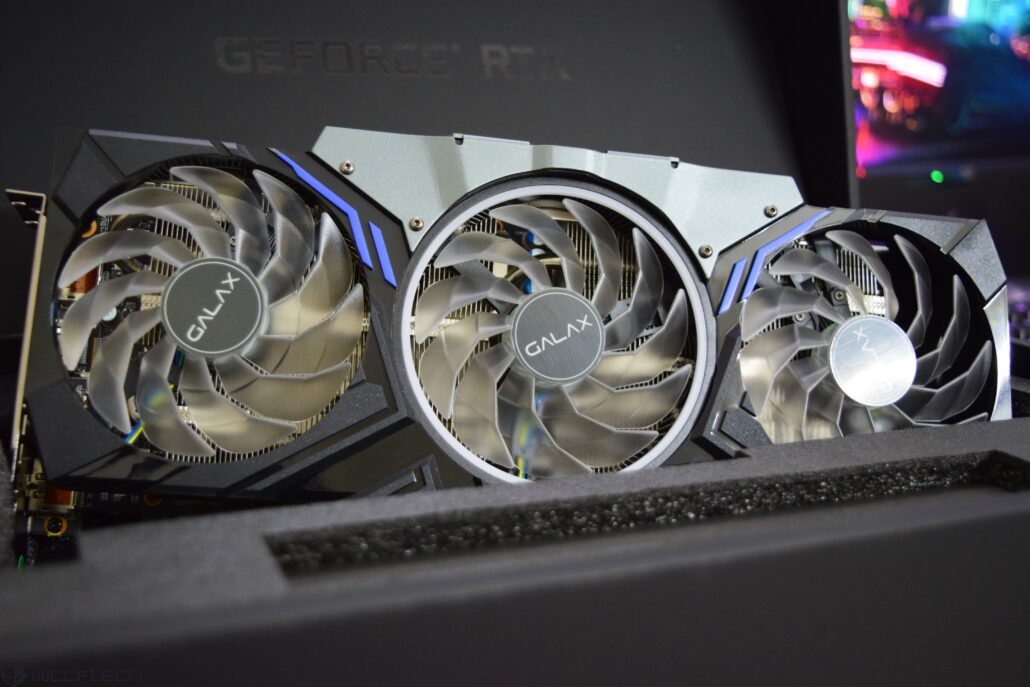 The back of the card features a backplate which comes with a unique Galaxy picture etched on it. The backplate offers a lot more functionality than just looks which I will get back to in a bit. 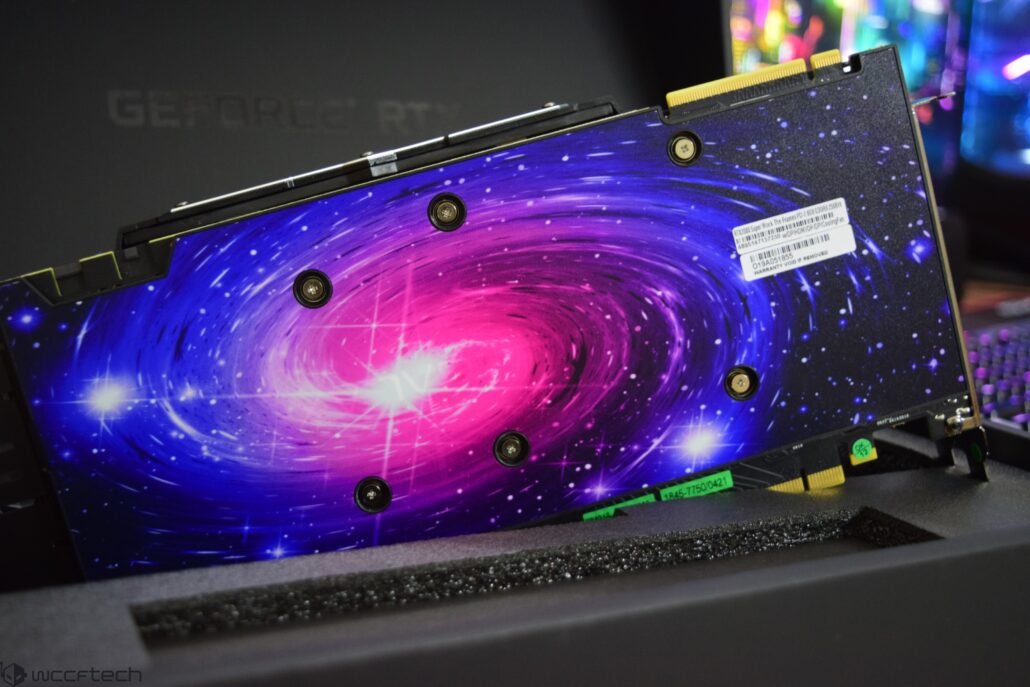 In terms of design, the graphics card rocks a dual-tone color scheme which is black and silver along with some blue linings on the front. The card is a mid-way between the EX Gamer and HOF series but has a more premium feel compared to the EX Gamer which is expected because of the higher pricing of the card. 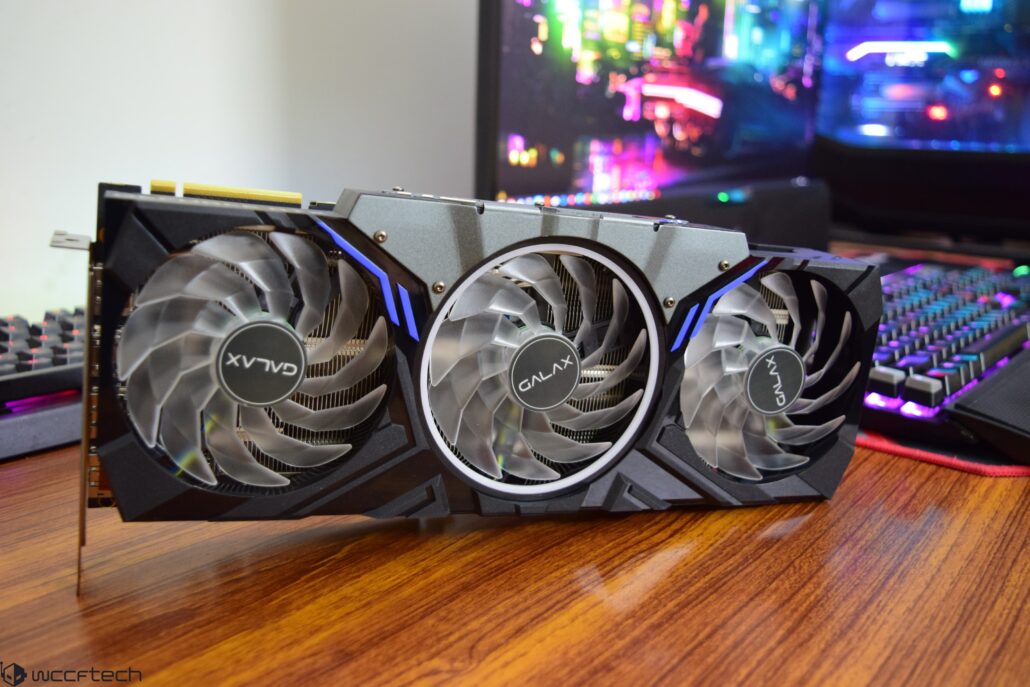 GALAX is going fully on-board the RGB bandwagon with their Work The Frame series, offering multiple light zones on the front and back of the card. The shroud itself extends beyond the PCB. 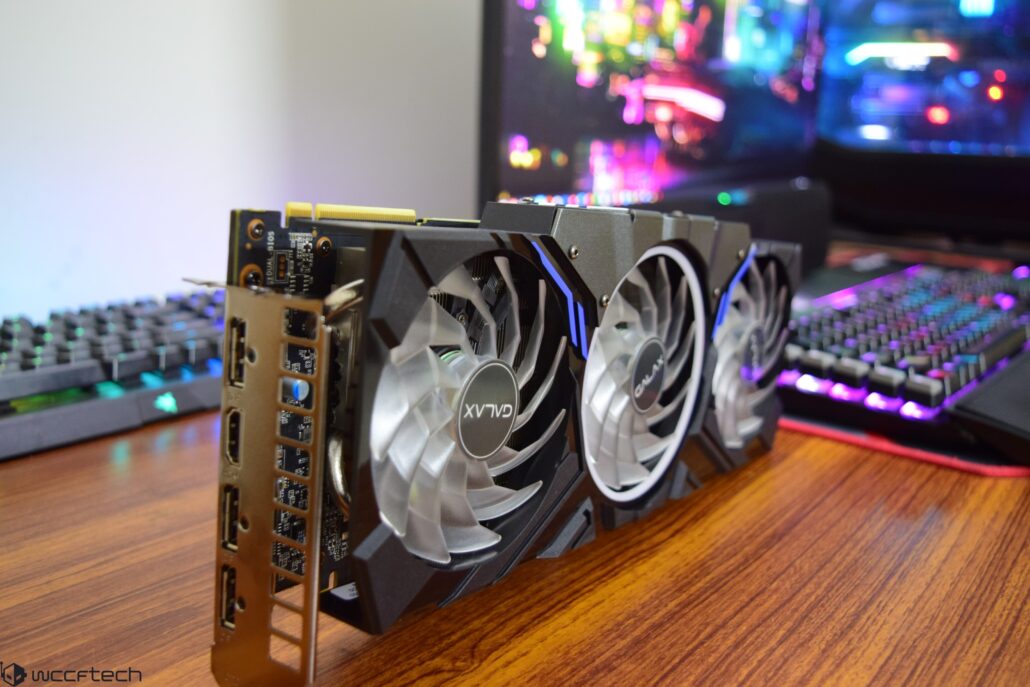 Coming to the fans, the card rocks triple 90mm fans. Each fan is comprised of 11 blades which have a very angular shape that is made to disperse hot air out of the card faster than standard designs. 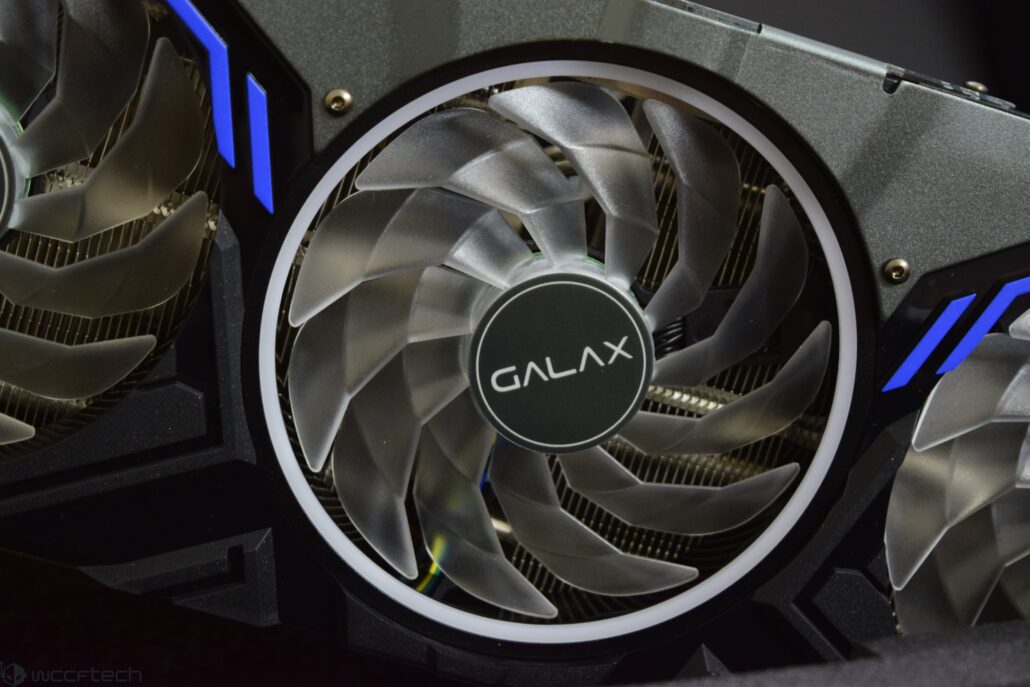 While all three fans have an acrylic finish to really shine with all the embedded RGB LEDs, the fan in the middle has an RGB ring etched around the shroud which offers an even more glorious display of this card's RGB capabilities. 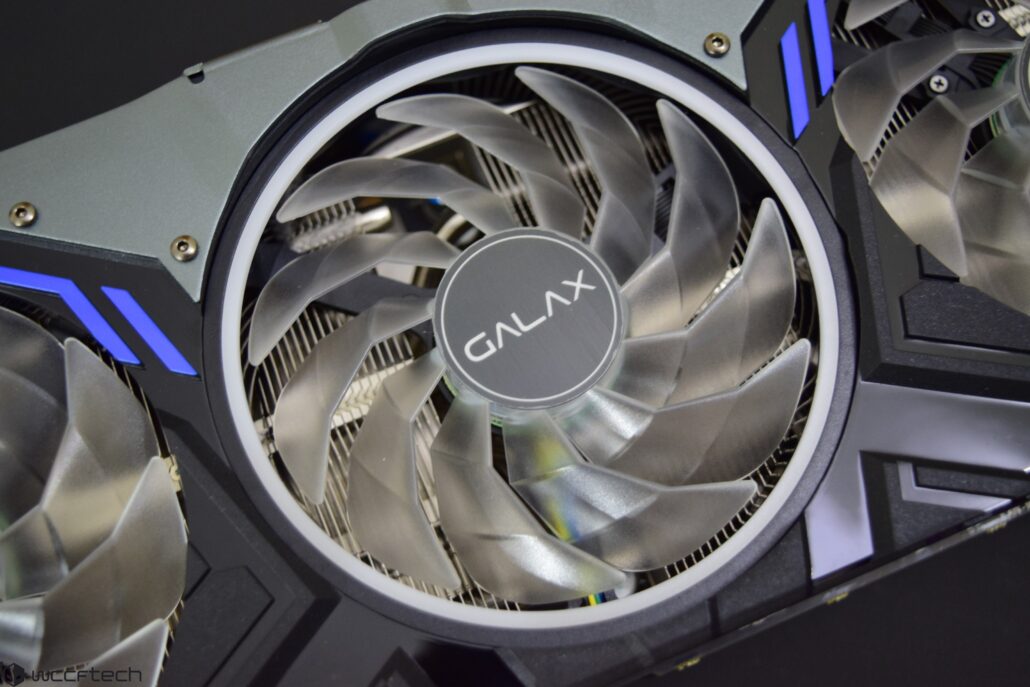 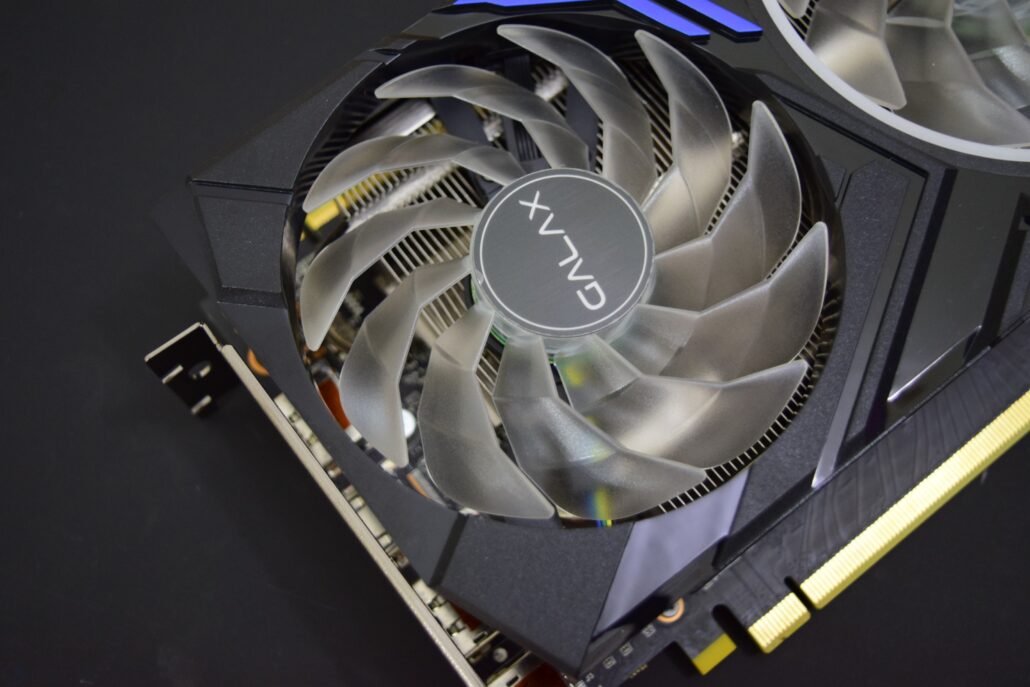 I am back at talking about the full-coverage backplate which the card uses. Do note that we are looking at a plastic backplate which does come with heat pads on the back. The backplate offers both protection and cooling to the card itself. 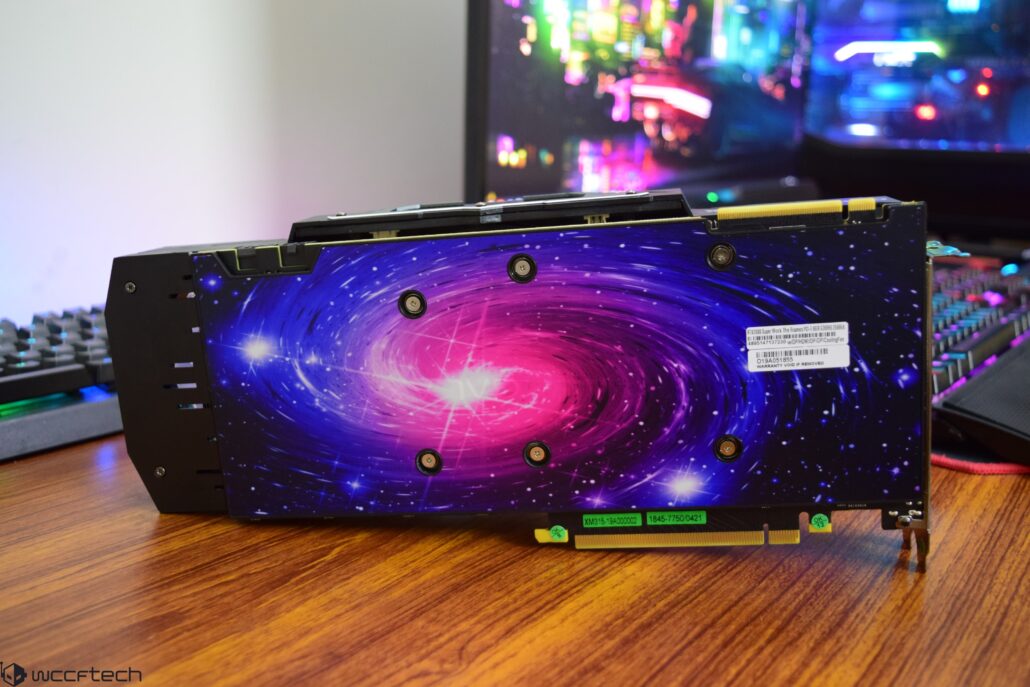 There are cutouts along the back of the backplate and the galaxy image used on the card has a nice touch although there were many other and great options for images that GALAX could have selected. But to top it off, GALAX has embedded multiple RGB LEDs within the backplate that glow through the stars, offering a stunning display of RGB effects inside your PC. It's as if you're looking at a real-time GALAXY inside your PC. 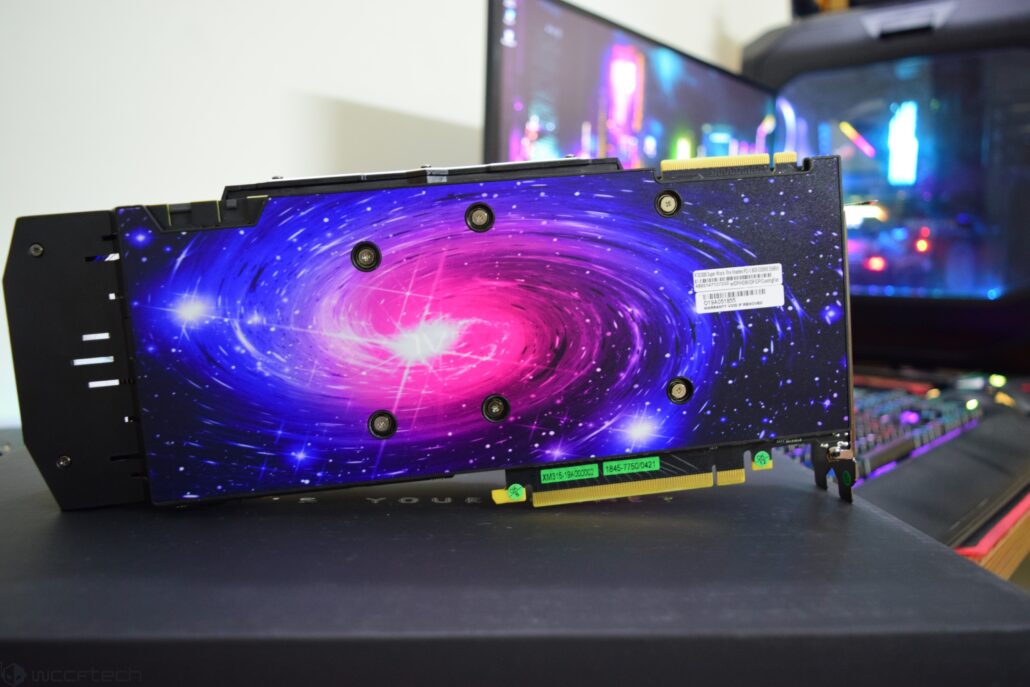 Multi-GPU still isn’t optimized so you won’t see many benefits unless you are running the highest-end graphics cards. That’s another reason why the RTX 2070 and below are deprived of NVLINK connectors. The NVLINK connectors cost $79 US each and are sold separately. Currently, only NVIDIA is selling them as the AIB cards don’t include any such connectors but that may change once the standard is adopted widely. 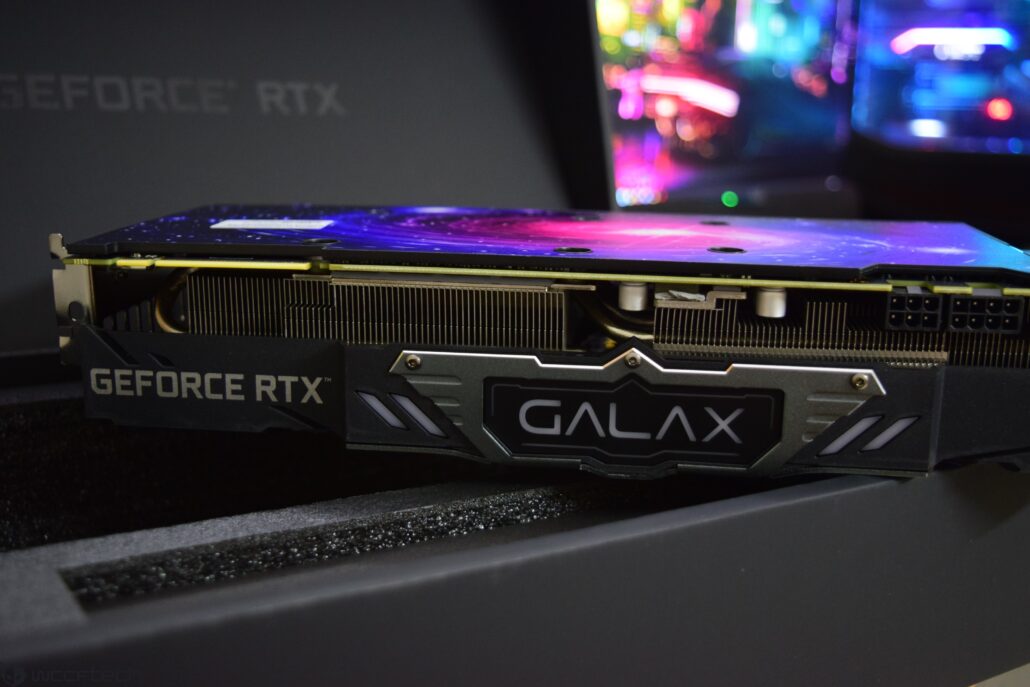 With the outsides of the card done, I will now start taking a glance at what's beneath the hood of this monster graphics card. The first thing to catch my eye is the humungous fin stack that's part of the beefy heatsink which the card utilizes. 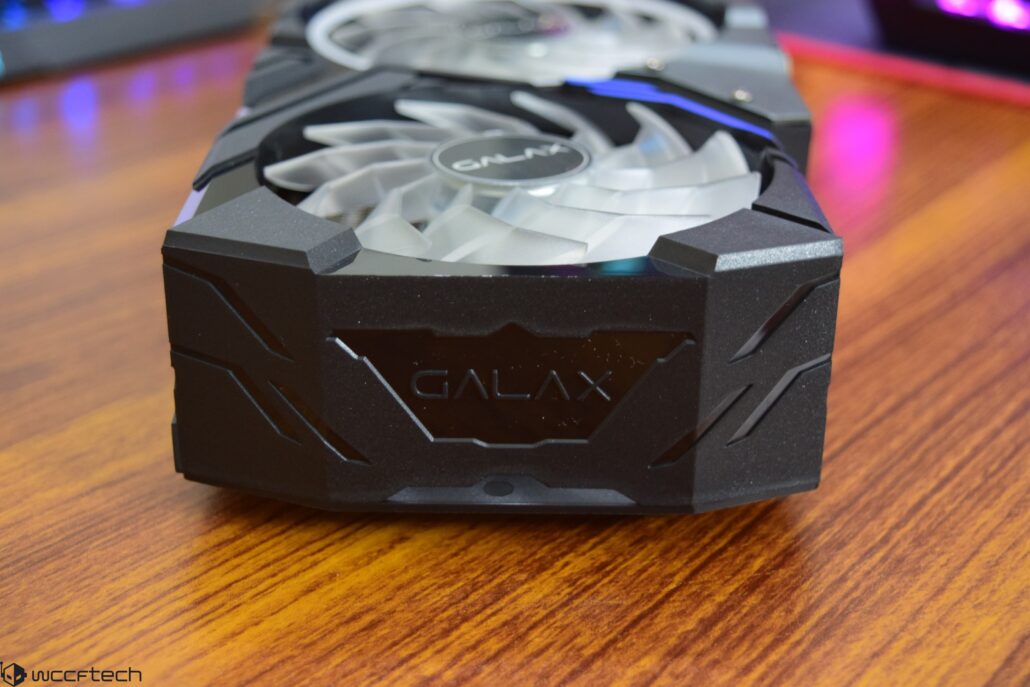 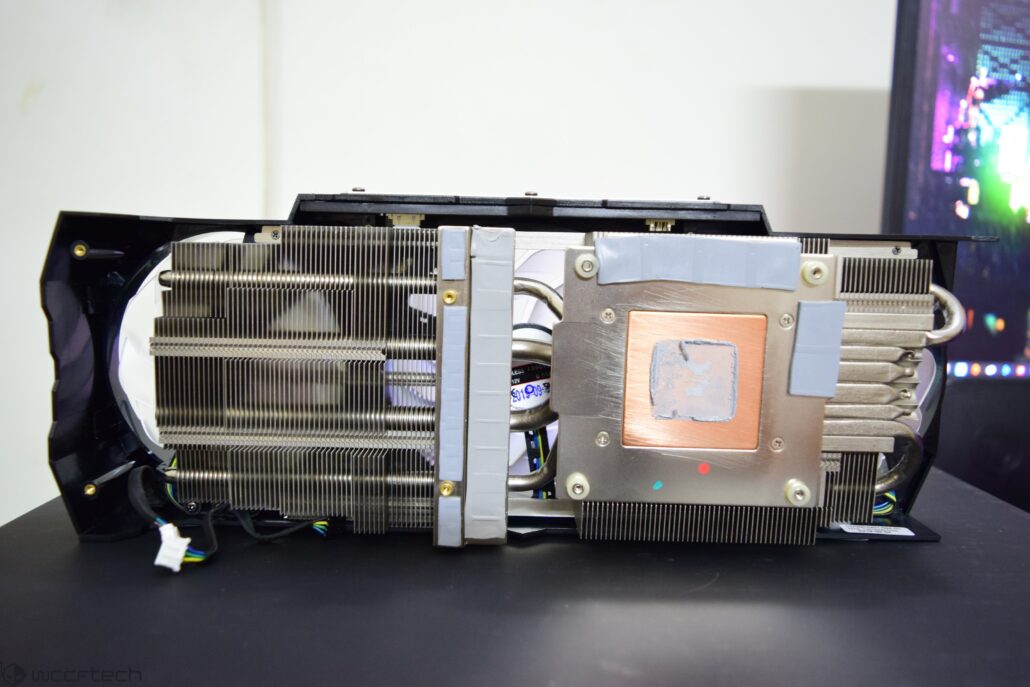 Talking about the heatsink, there are two blocks of aluminum fins which are interconnected by six heat pipes running through the copper base plate and heading out towards the dual heatsink blocks. 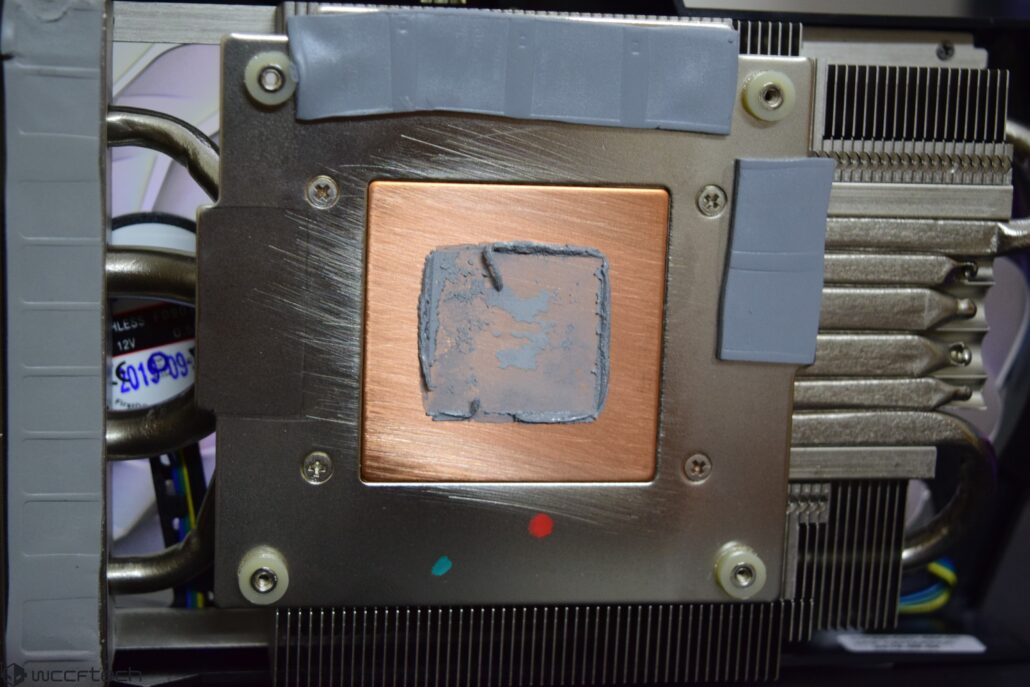 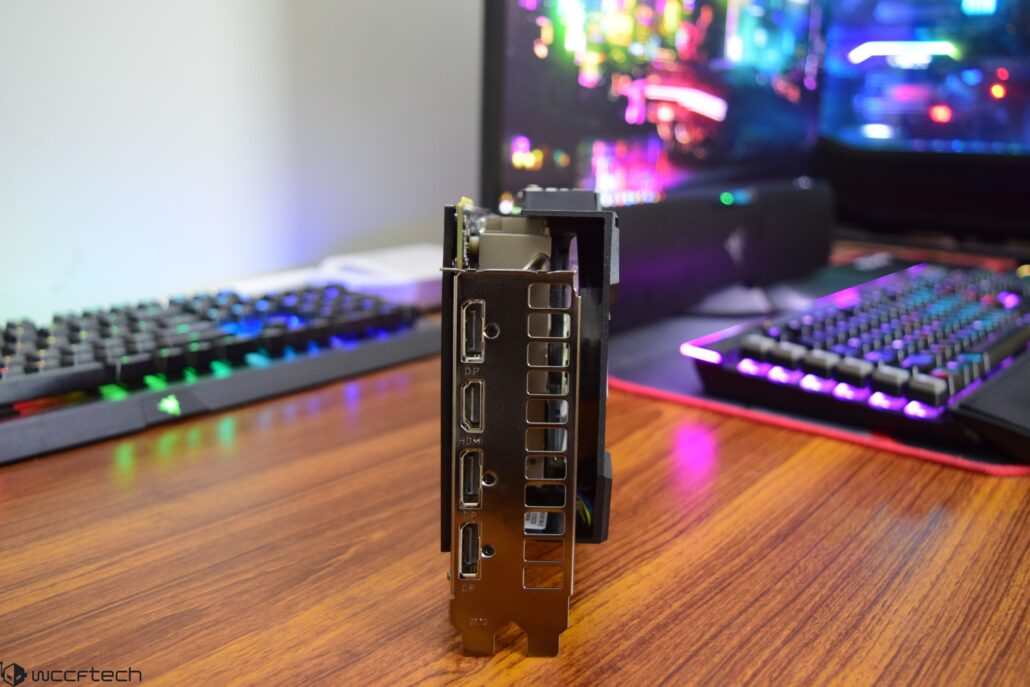 I/O on the graphics card includes three Display Port 1.4a and a single HDMI 2.0b. The reference variants include the USB Type-C VirtualLink connector which is missing on this card.

GALAX makes use of a slightly non-reference PCB design which includes a 8+2 phase DrMOS power delivery system. The card also uses the K4Z80325BC-HC16 GDDR6 memory from Samsung that operates at 15.5 Gbps alongside a 256-bit wide memory interface. Now interestingly, these modules are rated to hit 16 Gbps but NVIDIA has toned them down by 0.5 Gbps. 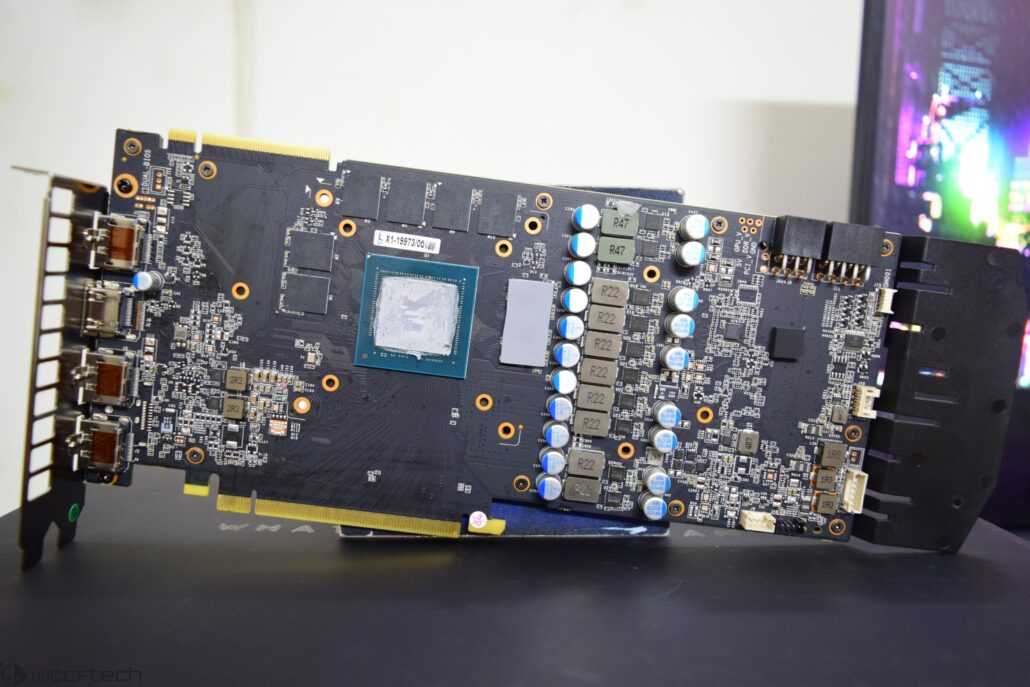 The exact reason for this is not stated and DRAM yields don't seem to be the issue here as the 16 Gbps dies have been in mass production for a while. What I have heard is that since the RTX 2080 SUPER uses the same PCB designs as RTX 2080, most AIBs are not going for a PCB revision just to support 16 Gbps dies which is required for stability purposes even though the chips can handle 16 Gbps with ease on a slight overclock

The GALAX GeForce RTX 2080 SUPER Work The Frames is a very power-hungry graphics card as showcased by its custom design. Being so, it uses a very power-intensive connector configuration which comprises dual 8 pin connectors. The card is rated at a TDP of 275W officially by GALAX. 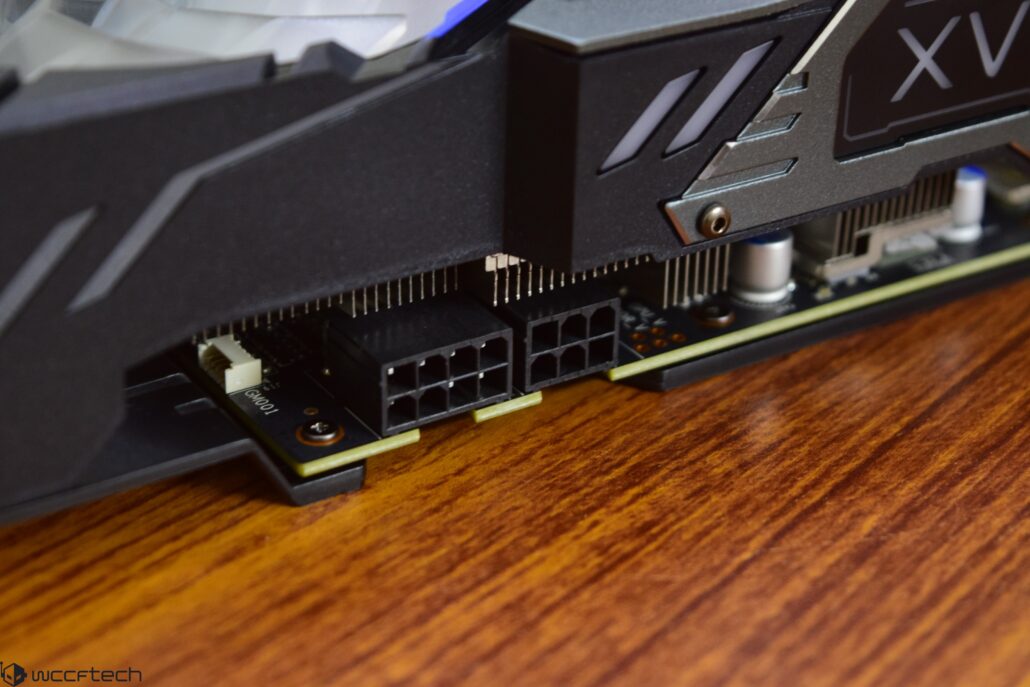