There are a good number of options for fans of sci-fi 4X strategy these days, with games like Age of Wonders: Planetfall, Endless Space, and Stellaris, just to name a few, but few franchises have a longer and or more successful legacy than Galactic Civilizations. Stardock has been turning out solid GalCiv titles since 2003 (or even longer if you count the original 90s OS/2 versions), although it’s been a while since we got our last new entry. That layoff comes to an end today, as Galactic Civilizations IV is prepped and ready to launch.

Galactic Civilizations IV offers plenty of gameplay tweaks and new features suggested by fans, but has Stardock done enough to modernize the series? Or is this vessel in need of a bigger overhaul? Time to see if we have a new 4X star on our hands! 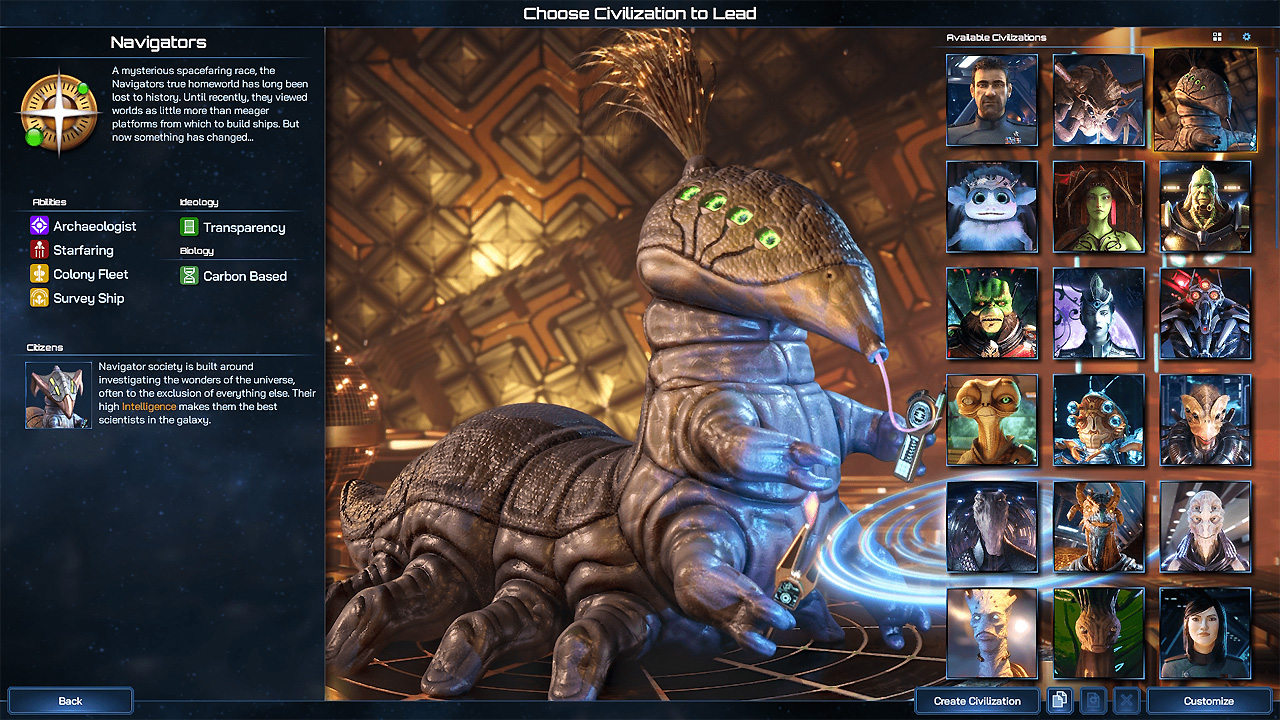 The Galactic Civilizations games deliver more or less exactly what it says on the tin – fairly standard Civilization-style 4X gameplay transposed into outer space. Pick your civ, ranging from humans to Ewok-like critters, to space dragons, then eXplore the galaxy, eXpand your empire by colonizing planets, eXploit their resources by building improvements/managing citizens, and eXterminate your enemies by building up armies and steamrolling to victory. Of course, you do other things as well, like researching new technologies and engaging in diplomacy, but you get the picture.

While some efforts have been made to make Galactic Civilizations IV look like something developed in the past decade (GalCiv 3 already looked a bit dated when it launched in 2015) the franchise’s core gameplay and identity haven’t changed all that much. The sense of epic scale you get as you spread out across the galaxy can be gratifying, but sometimes the series’ sci-fi veneer feels a bit thin. Honestly, Galactic Civilizations hasn’t always had a convincing reply to those who ask “Why not just play vanilla Civ?” 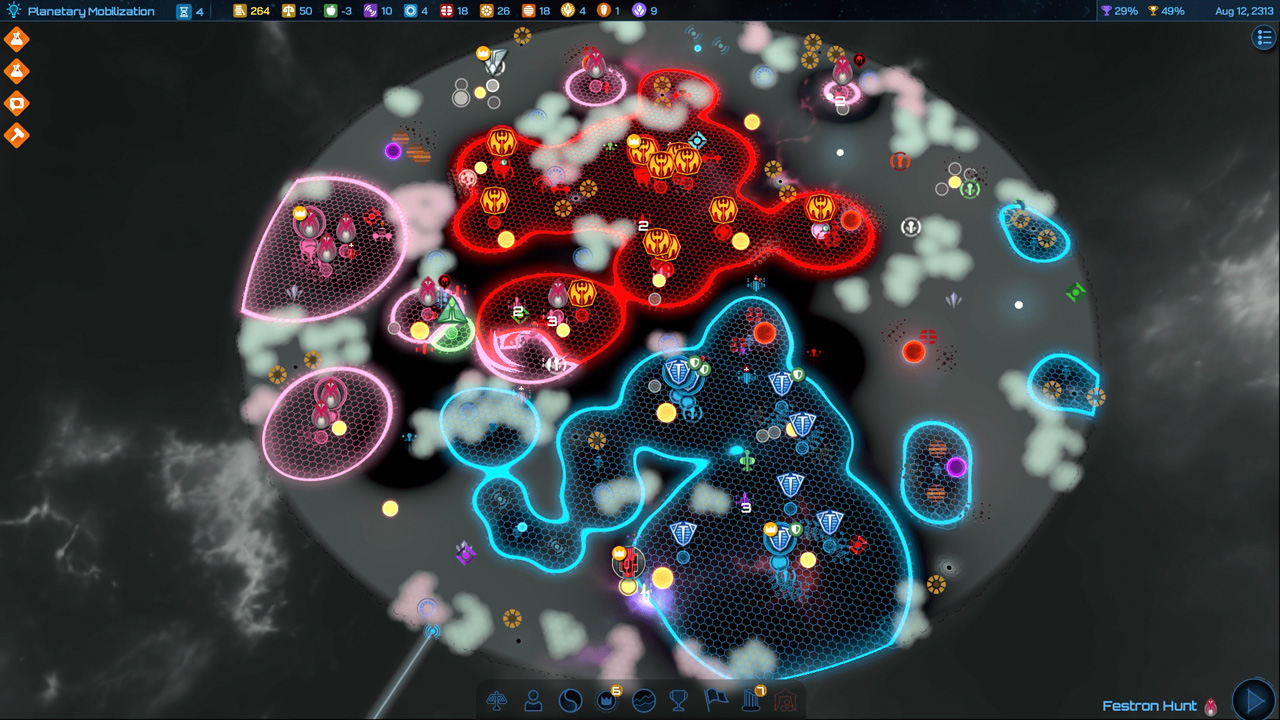 Stardock tries to make a stronger case with Galactic Civilizations IV, adding a number of new features to the game, some of which are more successful than others. Probably the best changes relate to how the galaxy itself is laid out. In the past, large GalCiv maps could get rather unruly, and too often it seemed like the player that simply staked out as many planets as quickly as possible would end up the winner. Now the map is divided up into a number of smaller sectors divided by “Subspace Streams” that you can only travel through after researching a specific tech. This new approach breaks up the early game “colony rush” and makes it easier to keep track of everything going on in the galaxy. GalCiv 4 also cuts down significantly on busy work, by dividing planets into Core and Colony worlds. In the past, you had to manage all your planets, even if they kind of sucked, but now you only have to manually tinker with important Core worlds with the computer taking care of your lower-tier chunks of rock. 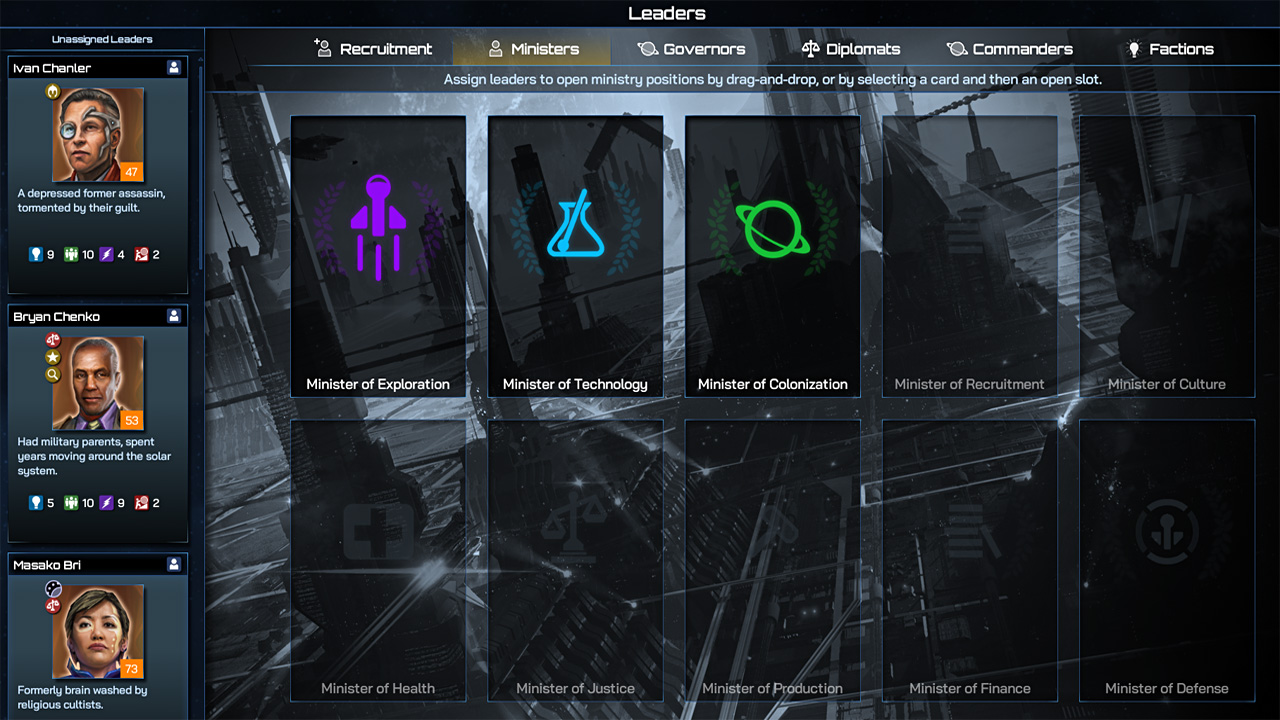 Less successful is Stardock’s attempt to inject personality into Galactic Civilizations IV via a variety of named characters you can assign as governors, ministers, or military commanders. It seems like Stardock is partly trying to emulate Civ’s Great People and governors, but the characters in Firaxis’ games are either based on real historical figures, and thus naturally interesting, or have a fairly major effect on gameplay. GalCiv 4’s characters are just a random assortment of faces and names and assigning them to posts doesn’t feel like it has that much of an effect on your game.

Other additions include a new Policy system, which allows you to adopt certain laws, most of which have both a positive and negative effect. Ultimately, this doesn’t feel that much different than the already-existing Ideology system, which returns in GalCiv 4 with a few new layers of complexity. Players will also gain new “Control” points each turn, which can be spent on powerful Executive Orders that allows you to do things like print money or rush research. I’ll admit, I took full advantage of Executive Orders, but they sort of just feel like built-in cheat codes. 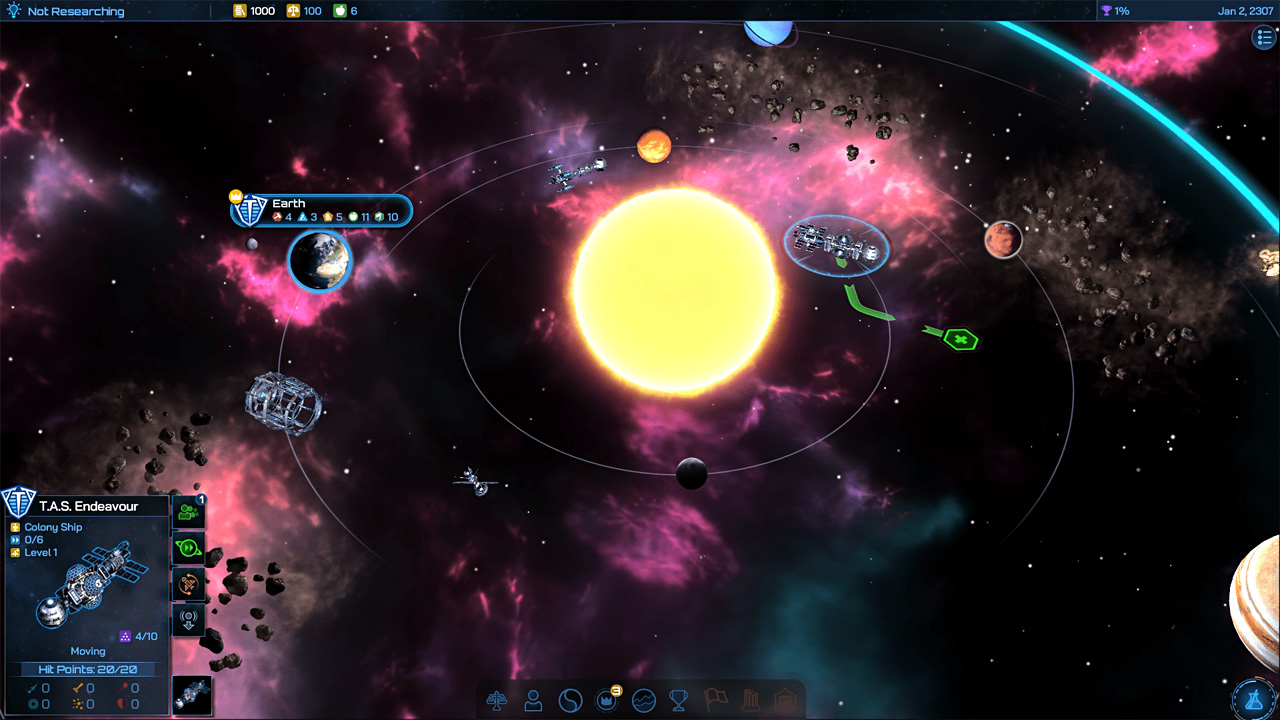 While things like the Policy system and assigning characters to posts don’t enhance Galactic Civilizations IV that much, they don’t really detract seriously either. Ultimately, the game’s biggest issues are the ones this series has had pretty much from the beginning. Randomized maps are a core feature of 4X games, but GalCiv’s feel a little more random than they need to be. While you never quite know what you’re going to be given in Firaxis’ Civ games, you’re always going to get some good spots to set up cities. In GalCiv 4, sometimes you’ll stumble onto an amazing system featuring multiple productive planets. Other times it’s just one system after another with only one decent planet, or worse, a bunch of dead husks. And trust me, I set the options to give me lots of good planets! Sometimes I still came up with bupkis.

Galactic Civilization’s tech trees have also long been in need of pruning. They’re overstuffed, unwieldy, and often difficult to parse. In Civ, you inherently know what something like Horseback Riding or Gunpowder gets you, but GalCiv’s tech trees are just a sprawl of technobabble. As in the past, Galactic Civilizations IV is also far too focused on military tech – well over 100 techs are devoted to improving your warships and weapons, with no other category (Governance, Engineering, etc.) having even half as many things to research.

Most players won’t go for a Conquest victory as total galactic domination is hard to achieve, but even if you’re playing peacefully, you still have to spend an inordinate amount of time researching a boring succession of shields and slightly better lasers guns so you don’t fall behind in the arms race and get invaded by your neighbors. To make matters worse, GalCiv 4 now only lets you choose from a select number of “research candidates” rather than letting you freely pick available from all available techs (you can re-roll these candidates, but there’s a cost). I suppose this is supposed to make things feel more manageable, but really, it just adds another layer of confusion to an already messy process. 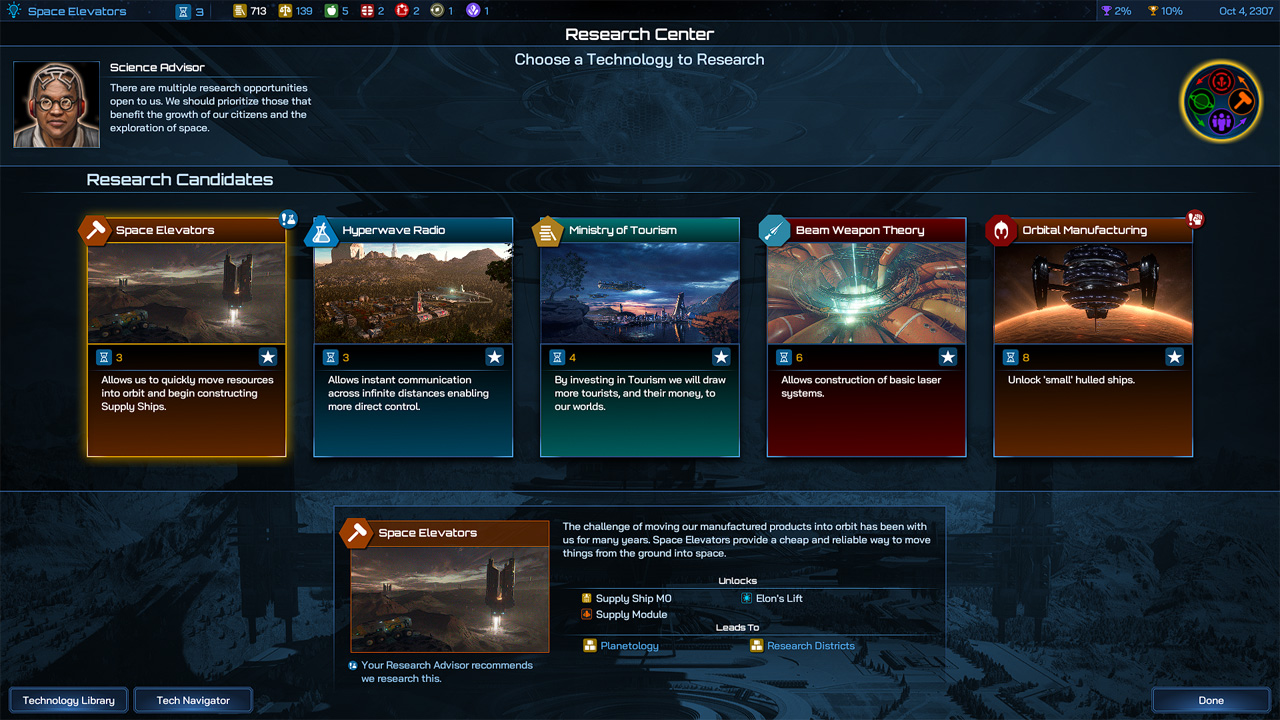 Thankfully, while researching endless military techs remains a must, there are some new options for folks who don’t want to take a violent route to victory. In past GalCiv entries a fairly large percentage of games ended in straightforward turn victories, with the winner being whoever had the most points when the clock ran out. Sure, a win’s a win, but turn victories aren’t terribly satisfying and it can take a long time to get to them. Galactic Civilizations IV introduces the concept of Prestige, which is awarded based on the size and strength of your empire, research, planetary development, and other factors, and you'll gain a Prestige victory if you’re the first civ to collect a set amount of it. Prestige victories make for less drawn-out games and even when you know you’re going to win, getting there is less of a grind thanks to a new type of endgame missions dubbed Galactic Challenges. These task you with doing things like heading off a space plague or taking on a mysterious threat from the dark edges of the galaxy, in exchange for a hefty chunk of Prestige. These challenges not only let you speed along your victory but reward you with an exciting climax for a game well-strategized.

So yes, Galactic Civilizations IV adds a good number of new features to the formula, but unfortunately, it doesn’t do a great job of explaining them. The game includes a few very basic tutorials, but that’s about it. The game lacks Firaxis’ in-depth Civilopedias or something like Crusader Kings III’s intricate nesting tooltips. As somebody with a moderate amount of experience with GalCiv, and a lot with the wider 4X genre, I managed to muddle through, but I imagine newcomers might be rather baffled. If Galactic Civilizations IV feels a bit dated (and it does), this lack of documentation and guidance is the number one reason why. Accessibility is the name of the game in turn-based strategy these days. 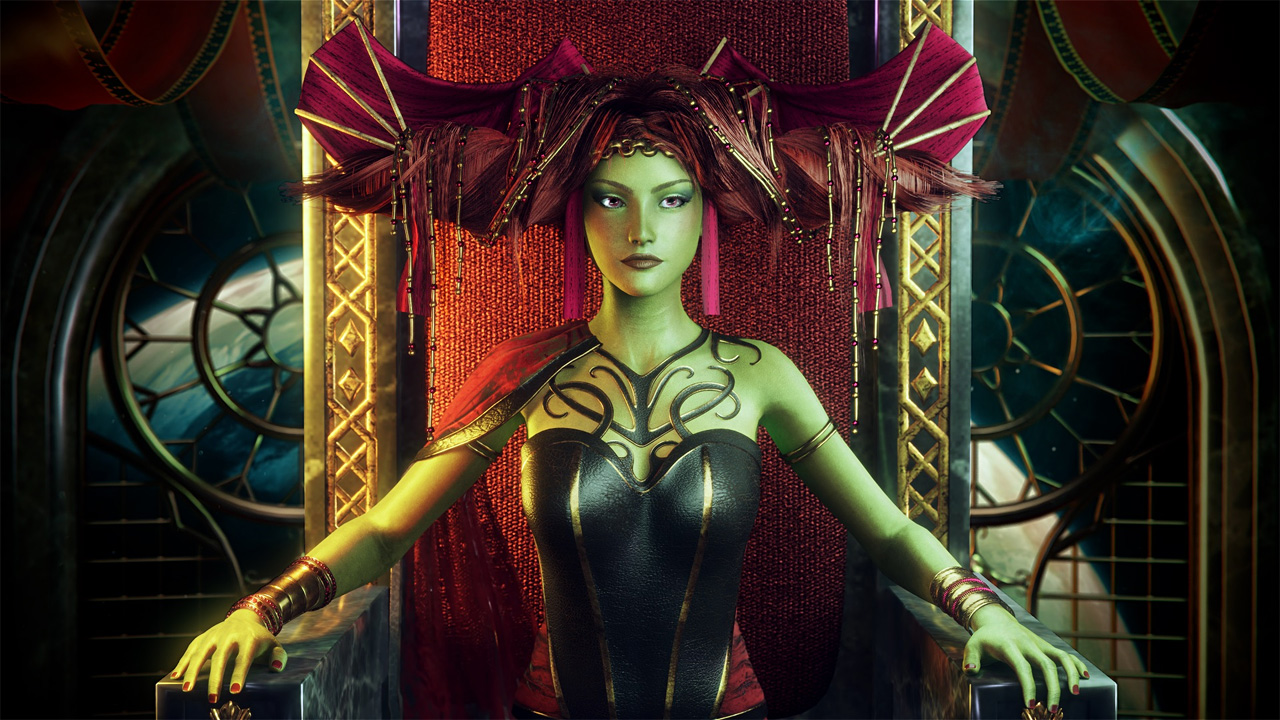 That said, if you can suss out how Galactic Civilizations IV works, there’s plenty to keep you busy. Even with Prestige victories in the mix, this is a “one more turn” time-eater, with games played on the fastest settings still potentially taking 20 hours or more. Add the ability to craft your own spacecraft and full mod support to the mix, and you have a sturdy vessel that should serve space explorers for a long time.

This review was based on a copy of Galactic Civilizations IV provided by publisher Stardock Entertainment. You can grab a copy of the game here.

Galactic Civilizations IV is another satisfying space-faring extravaganza that introduces some smart tweaks to the long-running series’ formula, although a lack of guidance, bloated tech trees, and some other minor lingering issues hold the game back from true top-tier status. Hardcore sci-fi strategy fans will undoubtedly find plenty to enjoy here, but this game may not quite have the gravitational pull needed to separate you from your 4X favorites long term.