Xbox Game Studios, and Microsoft by extension, are starting to annoy me. Not in the way that you'd think, though. For quite a while, I ranged from a complete mistrust of the company to apathy. They had killed a fair few studios (Lionhead, Ensemble, Aces) while pushing games that were average at best compared to other things in the industry, driven more by people trying to justify a console choice than anything the games offered (Halo, Gears). Now, I can't even take my usual cynical approach because Xbox Game Studios are putting out great game after great game. The question then is: does Forza Horizon 5 keep up this streak?

The answer to that question is: Does the pope shit in the woods? Yes, Forza Horizon 5 keeps up that streak. The only counterargument is that it breaks the pattern by not merely being a great game but an outstanding one. That would be a spoiler if you didn't see the score when opening this page. So the question now isn't if I like the game, it's why do I like it so much?

There are many reasons, and most of them can be found in my reviews of Forza Horizon 3 and Forza Horizon 4. The reality is that Forza Horizon as a series is progressing, but many things stay the same, with just the right amount of tweaks and improvements to keep it feeling fresh, fun, and exciting. That's the core necessity for a game like Forza Horizon 5, more than anything else, and it's something it delivers in abundance thanks to the hyper-fast arcade (with a dash of sim) style the game has arguably perfected.

Over five-hundred cars, that's what's available for you to win in a race or wheelspin, to collect, to find in barns or to buy from the game or other players. I want to give an exact number, but I don't know if the cars I got due to having the premium edition are available for those without it. I imagine not and will always be gated off unless real money is spent. Fortunately, the very best cars in the game aren't gated off, being available from in-game credits or actions, so it's not something I even hold against the title. It's also hard to argue against due to the game coming as part of Game Pass.

What I enjoy the most is that, even though this isn't a pure simulation, these cars mostly feel different to each other. Now, I haven't been in all five hundred. I've driven a fair few, some of them I've done up with the extensive upgrades options, I've tuned others - messing with settings I've genuinely no clue about, though the game does give you some hints. What matters is that the cars feel different. Their tyres and the terrain you're driving on have a massive impact and make for the wide variety you find within the game.

That's where the world of Forza Horizon 5 comes in. If you haven't noticed, there's a pattern of the areas getting more extensive and more varied. From Colorado to the France-Italy border, to the east coast of Australia and finally the north of Britain, each becoming more and more varied in what they offered, either in terrain or then climates. It's the largest game of them all, with Forza Horizon 5 covering such a variety of Mexico. As always, it's an amalgamated version of the country, but Playground Games have done as much as possible to get it all in.

In doing so, there are almost a dozen biomes in this map, more than any before in the series. There's so much to see from grasslands, forests, deserts, swamps, and even an active volcano (active for one race so far). Even better is that the seasons make a return from Forza Horizon 4. Still, while they would understandably impact the whole of the map - as it took place in a limited region - here, the differences will depend on the area. There may be snow on the volcano, but the gulf-coast beaches are still warm. When the wet season comes, though, you may be better off keeping away from the coast, and especially the swamps.

It makes for the most varied and lived in, for lack of a better term, than ever before. It all offers some of the best racing in the series, the map being used to its full potential; it seems impossible to cover everything with such an abundance of roads, trails, paths, and routes. This abundance is reflected in the game's structure and the division of the Horizon festival, with you being able to choose your direction based on what you enjoy in the game.

As you complete races, PR stunts, stories - if you've played a Forza Horizon game before, you know the deal and the variety of things on offer - you get accolade points. As you get enough of these, you earn an accolade that allows you to unlock another feature event at one of the festival sites or unlock another of the festival sites. There are six sites overall, with a total of twenty-one events. Each of the sites has its major behemoth-style event, expanding its offering compared to all previous titles.

What is also evident from playing Forza Horizon 5 is that abundance can be a bit of a curse. I look at Mexico in my game, and I've unlocked over 80% of the options. There's so much to do now; it leaves me indecisive. I know I want to save up the 5 million credits to buy the hotel outside the big city, but I also need those credits to purchase new cars and dramatically upgrade the ones I already own.

You also have accolades to complete through taking photos, covering more ground, performing specific challenges and stunts, and more - almost two thousand in total. What matters is that very little feels like it's content for the sake of being content, something that I often criticised That Ubisoft Game over. Everything just works, it feels like it's something that fits in with the horizon festival, with even the stories being satisfying. More than that, they're usually enjoyable when you have to use your brain to get three stars. It's not only about racing.

Well, it is, even the stories are all about the cars and the racing, but you know what I mean. Everything revolves around vehicles, including games of tag, stunts around a large stadium where you knock over giant bowling pins, and whatever other little minigames that Playground has put inside. These and the returning Forzathon timed events add to the multiplayer.

They are joined by Horizon Arcade, offering challenges for players to beat, similar to the Forzathon events but somewhat more comical and random. One of the other new features is the EventLab, which allows you to create events for yourself and other players, using a wide variety of tools to create these imaginative trials. Finally, I haven't mentioned the linking feature, designed to make the game more social and link you up with like-minded people.

I've noticed something; it's all been positive so far. Well, to keep up with that trend, I should say that Forza Horizon 5 is gorgeous. Honestly, it is. The environments are stunningly detailed, with weather effects adding to the scenery and atmosphere. That's before we account for new features like sandstorms and how the weather changes the world and how it looks.

Adding onto this is the music, with an excellent soundtrack full of music across the radio stations. I'm happy sticking to XS, listening to my rock music (with The Killers!) or the classical station now and then. One issue I had in the past, on the car and engine sounds, has been improved, but you still have some similarities. It's still an improvement, though.

Now, do I have any issues? I do, but they are so rare. I've had a few bugs, with audio clips repeating themselves. At one point, I had the same line repeat itself no fewer than seven times. It wasn't caused by rewinding because I was driving on a giant float, and I'd had no accidents. No, the game had just decided to break. I have also had two freezes/crashes, one where I opted to restart something and got stuck in the loading screen. Another time, the game just crashed while loading a race.

Still, these issues are so rare and so few, it's hard for me to hold them against the game much. The only other problem I mentioned earlier is a sort of indecision caused by the game and the insane number of icons on the map. My issue? While there is a filter, you can't filter out those you've got three stars. It made it too difficult to see what I hadn't completed, letting me choose what to do next.

Let's keep it simple. Forza Horizon 5 is a fantastic game. It's outstanding, and I can unashamedly say that if it's not my favourite, it's in my top five games of the year. I recommend it for anybody and everybody, with there being no real reason not to try it out if you have Game Pass. 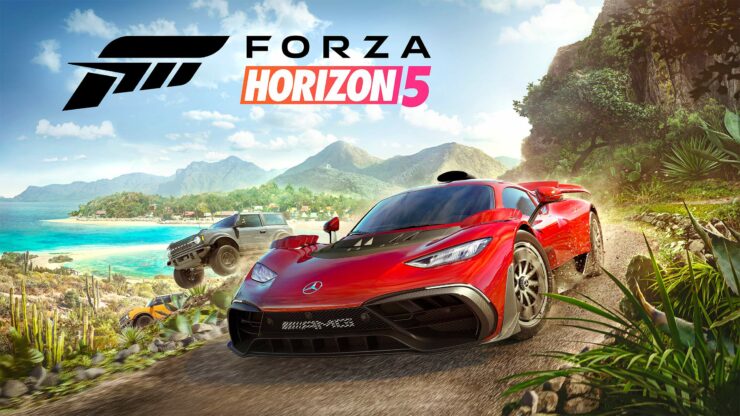