The Flame in the Flood Review – A Light Among Rogue-Lites

I have a confession to make. I have been excited for The Flame in the Flood for quite some time now. The second the twanging trailer rippled across the internet I was hooked. As a young man from northern England my exposure to American country music is, well, limited. But the dark tones of Chuck Ragan are mysterious and intriguing, and I was immediately addicted to the name, song and eventually, the game.

Once upon a time the makers of The Flame in the Flood were developers at Irrational, Harmonix, Bungie and other studios. And like so many other developers when they first step onto the riverbank of independent work, they built a survival rogue-lite game with procedurally generated elements (in this case, the river) after a successful Kickstarter campaign.

Although the stream is clogged with the genre, The Flame in the Flood provides enough innovation to clean the waters. What is really surprising about The Flame in the Flood, is that the music that so enthralled me in the first place feels oddly missing from the completed game. While the music is wonderful and matched perfectly to the game, it doesn't play nearly as often as you'd like. When it does it's great, but frequently you're left with nothing but the sound of the river. 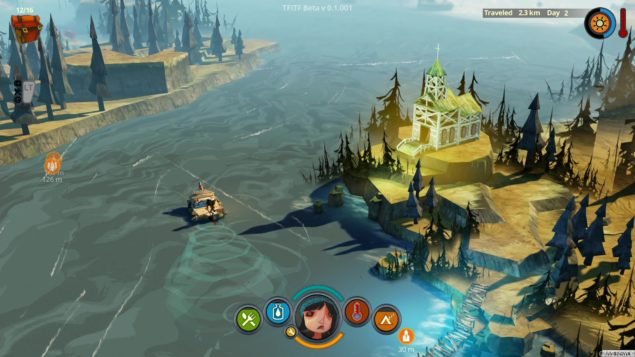 Playing as Scout, you’ll venture on a quest downriver, stopping at remnant waystations to collect supplies before journeying onward. You’ll need to manage your need to eat, drink, sleep and keep warm, which is more challenging than you might expect at the edge of a raging river. Civilization has been washed away by the swelling waters, and you’ll have to scavenge what you can from the old buildings and leftovers of the people before.

You won’t be alone on your raft, with your friendly companion and occasional pack mule Aesop the dog by your side. He’s safe from harm, so you needn’t fear protecting him, and plays a very important role in helping manage your inventory. While other games have a stronger focus on crafting, The Flame in the Flood uses a blend of that with the critical decisions being made not on what to make, but what to keep. Initially, you can have only 12 spaces in your pack. These can be food, lumber for upgrading your raft, medical supplies, hunting supplies or anything else. It’s not a lot to go on and in the early hours of the game, there will be a lot of deliberating about what is and isn’t important. Aesop can help by carrying some of the essential but not immediate items, but trial, error and a lack of sentimentality is vital to survive along the river. Much like the decaying civilization around, you can’t grow attached to anything if you hope to live long downstream.

The inspiration for the Flame in the Flood is painted all over the game, it’s the source of one of its central mechanics and the fourth word in the title itself. The river that is so central to the game, is the center of so many of the stories. The weird and wonderful can be found while wandering down the river, just ask Huckleberry Finn and other characters in Great American Novels. It’s a fabulous and unique aspect for a game to focus on, where survival is made to be about constantly moving, rather than hunkering down. 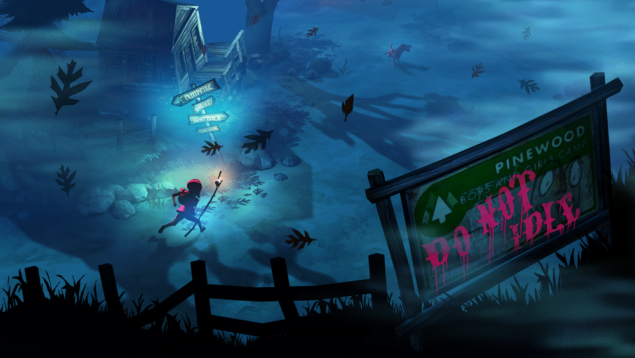 Once you leave one port, whether it be the isolated patch of wilderness, a little huddle of buildings, or a church, you can’t go back. This makes the need to organize your inventory all the more important, while making sure that keeping moving is always at the forefront of thoughts. You have to always move forward, always press on down the river and attempt to find what you need to survive along the way.

A lot of where you’ll explore is safe from all but the elements, but other areas, especially during the night-time cycles, contain some less than friendly inhabitants. While rabbits offer a tasty snack if you can whip up a snare to catch them, boars offer more dangerous game. Snakes can lurk in the long grass, while wolves and bears are the true threat. They will actively hunt you across the shoreline and islands they hold domain over, and their wounds can be a serious threat to your continued adventure downriver.

Overcoming the wildlife is done mainly with the use of traps. Although you can craft a bow for more direct confrontations, arrows are a rare privilege, so its best to use poisoned bait and snares to cripple and eventually overcome your target. Luring your attacker into a trap is worrying, but ultimately rewarding once you start to understand the movement of your prey. You can even start to play animals off against each other, getting snakes to bite at what is hunting you.

A lot of what you do in The Flame in the Flood is about learning and improving for next time. Crafting schematics are acquired when you gather the right assortment of ingredients, but the knowledge is carried onwards if you have to start again, meaning you can plan a little bit more after each fatal mistake. More than just that, anything Aesop is carrying when Scout meets her maker is brought back to her at the beginning of the river. The Flame in the Flood is all about constantly moving, even if that means going backwards to move forward again.

But what ails you along the river is also constantly shifting too. Rather than a standard health bar that decreases or increases with the situation, The Flame in the Flood has ailments that slowly get worse until there’s no hope. Having a deep cut from a wolf attack is bad enough, but left untreated it could become infected. They start unpleasant, but move into severe if left unattended. While something might seem easily disregardable, it’ll only get worse if you don’t patch yourself up as quickly as possible. 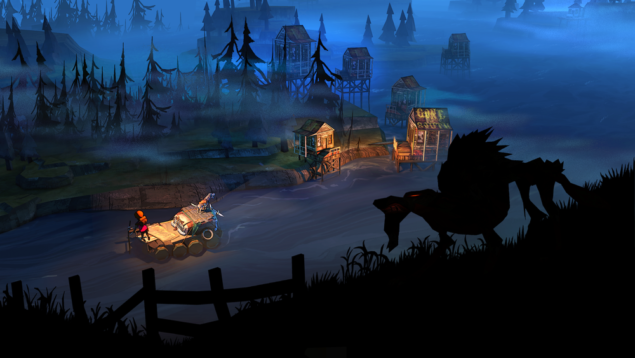 It’s a nice way of having the player juggle what needs their attention the most, and once again plays into the challenge of managing your inventory. Carrying around healing equipment you don’t need yet is costly, but giving it up could spell disaster the next time you come ashore.

The two modes available to you both play roughly the same, while the Endless mode is all about getting as far downriver as possible, constantly balancing your needs and the wounds you suffer. The campaign gives you a set of objectives you complete by pressing on down the river, starting with listening to a garbled radio message. You’ll never make it to the end on your first try. That is not the point of The Flame in the Flood. It's about pressing on, getting as far as you can and doing it again a little better. Not everything it does is done as best as it could. The crafting system means you’ll occasionally have to drop items to make room to craft something only to pick the items up again, or drop items to free up room to move things between you and Aesop. Although they are only minor issues they can impact the game when you have day and night cycles.

But despite its minor faults, The Flame in the Flood is a breath of fresh air in a crowded and unsatisfying genre. You won’t be bumping into zombies on your drifting raft, or fortifying a little bases to explore from. While the music and its dulcet tones might draw you in, the unique art style and adventuring survival will have you coming back to the river again and again, excited about what you’ll find this time.