Let's get one thing straight right away: Far Cry New Dawn is barely a post-apocalyptic game. You might be forgiven to think so given that the game directly picks up after the ending of Far Cry 5, where Hope County (and indeed the whole world, as the developers at Ubisoft have since revealed that 88% of the planet's population has been wiped out in the aftermath) got ravaged by nuclear bombs.

Far Cry New Dawn is set only seventeen years after that critical event, which means that the environment should absolutely still reflect this in some way. Yet, it doesn't at all. There are no mutated plants, no mutated animals, no pockets of radiation still left anywhere in sight with the notable exception of the map's very boundaries. Indeed, funnily enough, the so-called radiation zone featuring the familiar infertile soil and dead trees stands only a few meters away from the normal terrain, which is quite the jarring sight. As soon as you approach it, you're warned by the game to turn back.

Overall, the only visually noticeable change compared to the Hope County seen in Far Cry 5 is the substantial overgrowth that supposedly happened while everyone was underground, hiding from the nuclear fallout - the one that appears to have had little, if any, impact on Hope County.

If all of this doesn't bother you in any way, that's good news, because Far Cry New Dawn is otherwise great on all accounts. Ubisoft expertly built it as an extension of last year's game and it was definitely a smart move. Far Cry 5 restored the open world first-person shooter franchise to its former glory after the mixed reception to Far Cry Primal. It was both a commercial and critical success; in fact, here on Wccftech both our staff and our community just agreed to award it the Best Shooter Game of 2018 prize.

New Dawn continues in the very same direction with its responsive combat and addictive open world action that's fun any way you slice it, whether you are on foot going for a stealth approach, delivering explosive mayhem with your RPG launcher or raining death from above with an attack helicopter. The breadth of tactical options is something you don't see every day in a shooter, and it's made even better by the ability to mix and match them dynamically as required by the current situation.

The Guns for Hire and Fangs for Hire are back, too, and they can be very helpful during combat. Strangely enough, Ubisoft appears to have limited the active companions to just one, whereas you could go around with two buddies in Far Cry 5. Color me a bit disappointed about this. 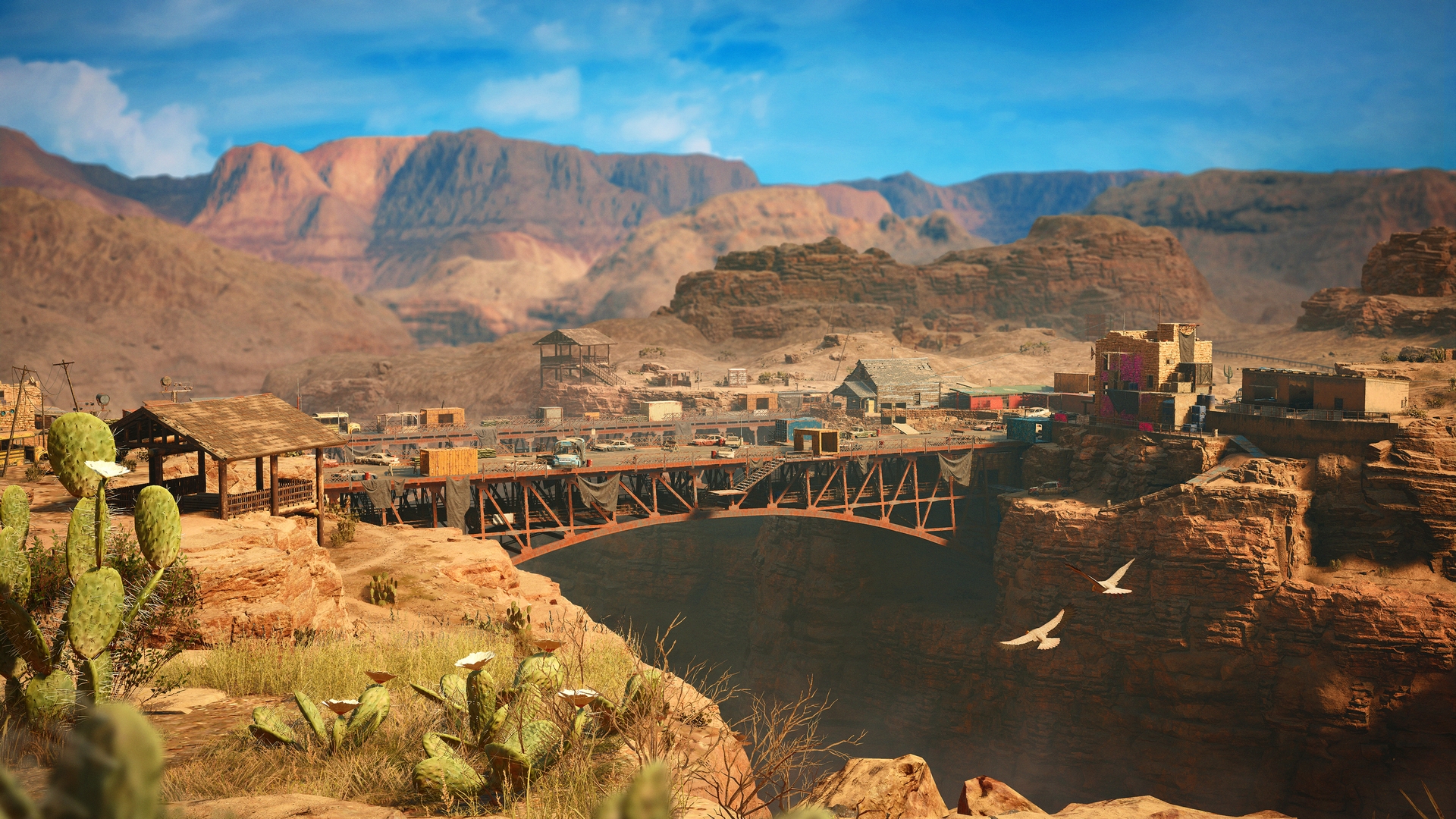 As in all Far Cry games save the first (developed by Crytek, as some of you probably remember), you'll need to take over a great multitude of enemy outposts scattered throughout the playable area. New Dawn does, however, add a twist in that liberating these outposts grants a certain amount of ethanol, the most important resource you'll need to upgrade the Prosperity home base and progress in the game. Once you've freed an outpost, though, there's the option to 'scavenge' it to get a little extra ethanol; this also means, however, that the Highwaymen will retake said outpost and reinforce it with tougher enemies. The extra difficulty translates in better rewards, should you choose to overtake the outpost a second time.

This does introduce an element of grinding to Far Cry New Dawn, as you may find yourself in need to pursue this road in order to get more ethanol to fully upgrade Prosperity's various sectors. On the other hand, there are so many outposts that simply clearing them all once should get you through, even more so if you manage to stay undetected or defuse the alarms since this grants extra ethanol.

An interesting addition is the ability to venture outside of Hope County for the so-called Expeditions. This is explained in the game's story as the antagonists Lou and Mickey are only the leaders of a chapter of the Highwaymen, while many more chapters are ravaging other areas of the United States at the same time. At some point early in the game, a pilot named Robert Cadoret will let you know that he can drop you via helicopter near these bases. You'll then have to grab a package in the middle of their base with a built-in GPS that will direct all enemies to your location; a quick extraction is the next step to get away with the stolen resources.

All in all, it's a nice little diversion from just roaming the fictional countryside of Montana as these maps have very different settings, such as the Navajo Bridge seen in the picture above or a large ship stranded on the shore of Florida. In a similar fashion to Outposts, you'll be able to replay them a second time against stronger enemies for a bigger reward payout.

Co-op players will be happy to know that the signature drop-in, drop-out cooperative option is also available for the Expeditions, allowing you to take on these Highwaymen bases with a friend. As usual, playing with a friend in Far Cry just ramps up the chaos and fun at the same time and is therefore highly recommended. 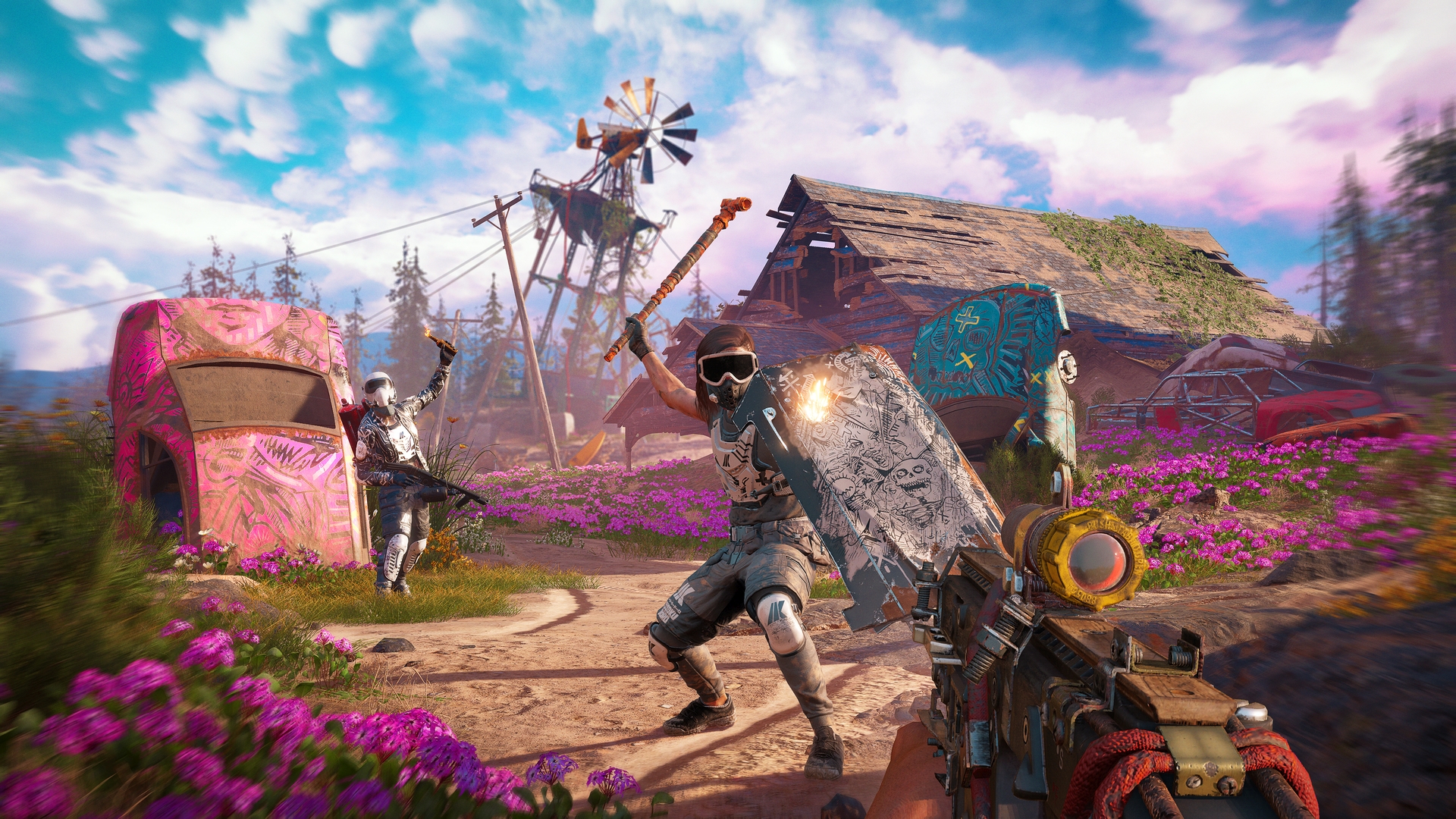 Supply drops are a new type of open world activity that's based on the game's emergent system, activating a rush to the dropped resource stash that can take place pretty much anywhere in Hope Country.

Other than that, there are the usual Treasure Hunts as well as all the emergent gameplay provided by the AI ecosystem. This can result in some funny and unexpected situations as any NPC in the game can interact with one another. Roaming animals (which can also be attracted with a crafted bait, if you're that devious) are just as much of a threat to the player character as they are to friendly and hostile NPCs, and it is quite common to see all of these variants at play with each other. In my last session, I witnessed an elite bear attack a bunch of Highwaymen just as a roaming merchant downed by said Highwaymen was being revived by one friendly archer from New Eden.

From a story perspective, while this might not have the grandiose narrative of Red Dead Redemption 2 or God of War, Ubisoft appears to have found a nice tonal middle way between funny and serious that's very fitting for the franchise.

What's even better is that unlike other spin-offs, as a direct follow-up this one gives players the chance to meet some of the best characters from Far Cry 5 once again and check how they've been changed by the events and time itself. The new twin villains Mickey and Lou are nasty enough to leave an impression, though they can't match the greatest ones in the franchise. However, Joseph Seed himself is also featured in Far Cry New Dawn, though as a very different man.

In terms of longevity, the game should take you over twenty hours to be fully completed, which is quite the bargain given the $40 price. The Far Cry Arcade map editor and multiplayer mode of Far Cry 5 seem to be missing, though. 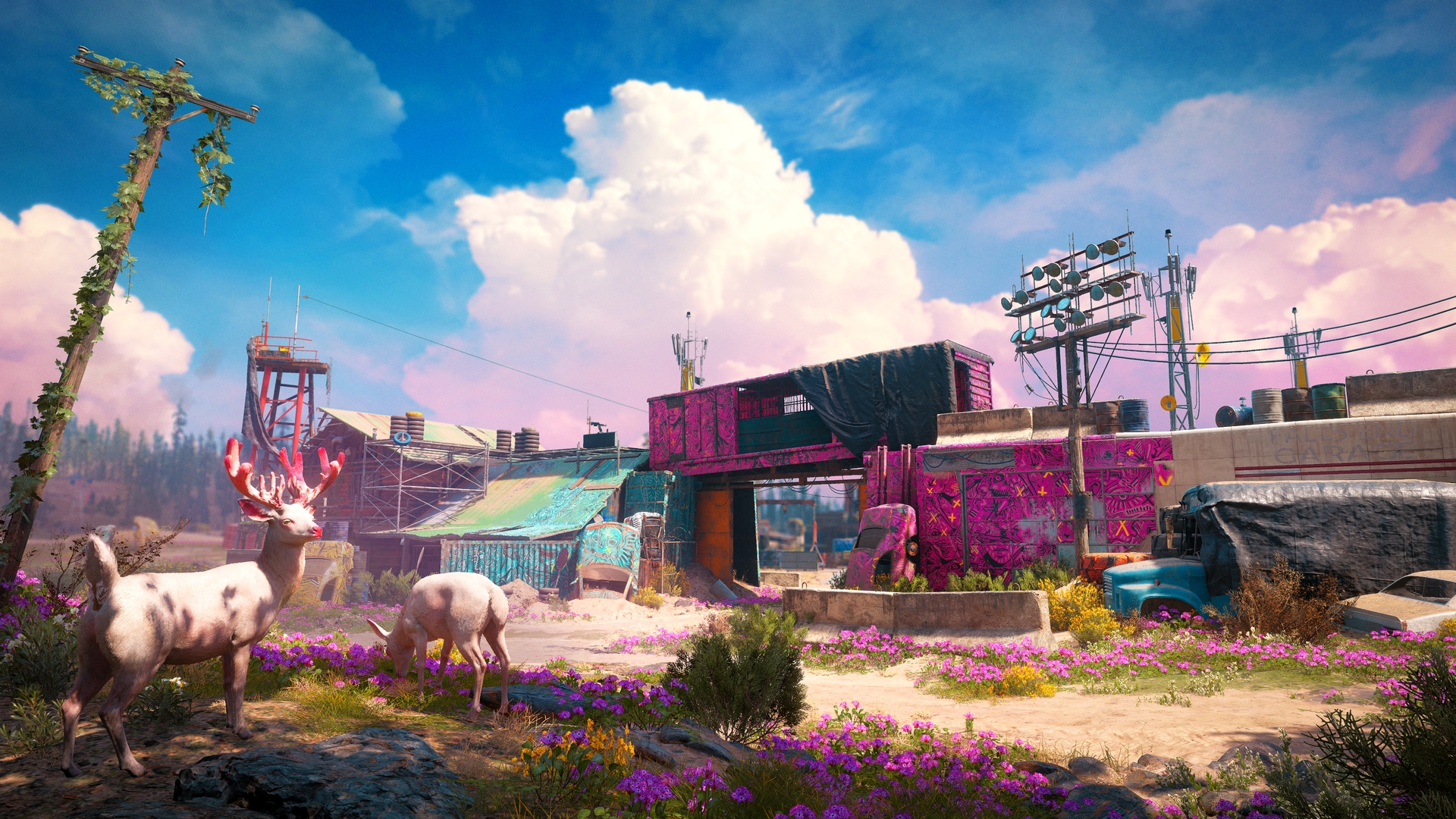 From a technical perspective, there are only positive things to say about Far Cry New Dawn. The game runs extremely well, even at maximum settings. Keith's video analysis goes more in-depth but for my part, I can attest that it is silky smooth at 4K resolution with an RTX 2080Ti card that's not even seriously overclocked.

It also looks stunning. It may not feature the latest and greatest advancements in rendering techniques such as ray tracing, but Hope Country is nonetheless gorgeously detailed on PC thanks to the Dunia Engine. The game's implementation of High Dynamic Range is one of the most impressive I've seen on PC yet, with the option to use the HDR scRGB color space instead of the usual HDR10.

Of course, as with any game's graphics, the artists deserve to be praised as well for their work. The assets released by Ubisoft during the marketing phase had some fans worried that there would be an overabundance of bright colors in Far Cry New Dawn, but that's not really the case in the game as you can see in the footage below.

It's fair to say that Far Cry New Dawn is 'more of the same', by and large. But when it's more of the same of the good kind, it's hard to find any serious complaint. The game is a ton of fun to play, looks great and runs even better than that. Just don't expect to find much of a post-apocalypse in this version of Hope County.