Etherborn is a gravity-defying puzzle that warped my brain. Puzzle games normally direct you in one way or another to the solution. Early test chambers in Portal used subtly different floor and wall patterns to highlight the correct locations, and the Witness always had the goal in view, just to name a few. Etherborn, on the other hand, doesn’t give you much to work with.

Most of the puzzles in Etherborn or about gravity, or perspective. Whichever way the character's feet are pointing is the way they are going to fall. Walking over a curve is going to fundamentally change the way you approach and interact with the environment as walls and ceilings become floors. One might expect that early puzzles would lay this principle out gently, with an obvious platform to move between. Instead the correct solutions, or at least the ones I found, were often expertly disguised as the scenery even within the first few minutes of the game.

The environments themselves are abstract constructs that resemble things like bridges, buildings, and parks but don’t quite make sense. There's also always quite a lot of empty space on screen as well, which becomes an issue when you keep falling into the void. It's pretty, albeit slightly unsettling.

When you look at the Etherborn you might mistake it for a platformer. The zoomed-out camera tracking a distant camera gives it that impression, but it's not one that you get from playing it. As soon as you’re handed control, you’ll find your avatar moves far too slowly over quite large environments. There's no sense of urgency to the movement which I can only assume is a deliberate choice. Even when running the sprint button, the character barely moves as fast as I would want them to at a regular pace. And while some sections of the game will have you jumping over small gaps, these clearly weren’t the focus of the developers time. Some players might find it all a bit sluggish, especially when you come across the larger structures that take far to long to explore the length of.

There is a story as well but, just as the setting, it's kind of strange and abstract. Puzzle games often struggle to tell stories that don’t feel at odds with the mechanics of the game and this is no different. It feels like it's kept at arm's length from you the whole time, as something that never quite connects with the gameplay itself.

And in keeping with the obviously abstract theme, the soundtrack is strange and feels a little like a puzzle for the ears. The atmosphere is very consistent throughout the entire game, but it's one that can be a little difficult to connect with, especially when you get stuck.

Maybe it's just me, but I struggled with the problem solving in Etherborn. Normally I enjoy thinking out of the box, but this was something I never felt like I could wrap my head around. Without clear goals, I found myself wandering around, interacting with everything until something opened or moved, and figuring that must be a step in the right direction. Often times I struggled to find where I was trying to go, only to stumble into it by luck. While games like The Witness and Braid had me jumping up in the middle of the night with the solution my brain had been trying to work out while I slept, I didn’t feel like I had anything concrete to puzzle and obsess over in Etherborn.

But maybe that is just because this kind of puzzle isn’t for me. Perhaps someone out there that has always struggled to connect with the puzzles in Portal will look at this game with the gleaming eyes of a mad scientist. Or maybe the game was intentionally made to be hard to decipher. Maybe you’re meant to walk around a feel a bit out of depth until you happen on to the next area and do it all again.

Either way, there are some things the developers of Etherborn could have done to ward off the tedium that I felt creeping in as I continued to chip away at the puzzles. Having a slightly faster character would have meant that when exploring every inch of some of the larger structures didn’t feel so much like a chore. And the game could have made it slightly clearer where it wanted you to go. I don’t mind that the routes are well hidden, as it makes you really examine the whole environment, but it can be frustrating to not know which direction you’re meant to be facing.

Its unusual art design is certainly eye-catching and its puzzles are definitely creative, but a few awkward missteps meant that I couldn’t become as invested in solving the puzzles, nor feel the satisfaction from doing so like I have with other games. 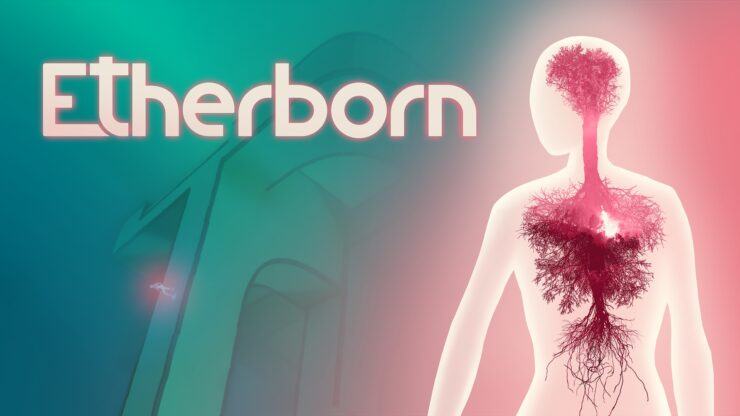 Etherborn looks nice and has some really interesting puzzles but they are presented in a way that's just a little too slow, not to mention a little too frustrating, to be truly enjoyable.