CAPCOM is a company that any gamer usually associates with the likes of fighting games (Street Fighter), action games (Devil May Cry, Dead Rising, Onimusha) or survival horror (Resident Evil, Dino Crisis). However, with Dragon's Dogma the famous Japanese software house attempted to dive into fantasy roleplaying games (RPG); while the game originally launched in the first half of 2012 for PlayStation 3 and Xbox 360, PC users are only now getting to play it for the first time.

While it may have been inspired by the likes of Elder Scrolls, Dragon's Dogma is a distinctively Japanese Action RPG. For instance, not only is the main character mute, the entire dialogue of the game is actually handed to you without any chance to reply, just like in the old JRPGs.

That is not to say that there are no ways to affect the events, though. Sometimes the quests will plainly ask you to choose an outcome, while in other cases your actions will determine it even if you don't realize it. As a whole, the story doesn't set any new standard in depth for games, but there is beauty in its simplicity and it does provide an ending which really comes full circle.

In many ways, Dragon's Dogma is a throwback to the old-school of gaming. There are very few directions compared to what we're used to nowadays, which may be occasionally frustrating. For example, a few hours into my playthrough I found myself suffering at the hands of most enemies all of a sudden. I had found a lot of gold while roaming the land but not much loot, which left me in a ragtag of armor and weapons; as a last resource, I tried checking the NPC vendors (which in recent RPGs are usually outfitted with mediocre weapons and armor) to find something useful and sure enough, they had amazing stuff to sell me.

Also, some quests and entire areas of the game may become completely unavailable if not completed before a certain moment in the story. Whereas in other games this is made very clear to the player, in Dragon's Dogma it is often hazy.

On the other hand, though, once I familiarized myself with the game I have to admit that this spirit of mystery actually became part of the enjoyment. More often than not, recent games guide players too strictly towards their destination; it was refreshing to explore this world (which is not very big but still packed with stuff to find) searching for some specific ingredient or item or NPC without plain bread crumbs to follow.

As just mentioned, the open world is not that big when compared to Fallout 4 or The Witcher 3. Overall, even with the Dark Arisen content, Dragon's Dogma will last you about 40 hours at most, far less than the big open world RPGs you may be accustomed to. Then again, it's certainly a respectable amount of longevity and the game isn't even at full price for this PC release.

There is a full day/night cycle in place and some creatures (such as skeletons, phantoms and undead) only spawn at night. Another little thing I appreciated is that night is really dark in Dragon's Dogma, forcing the player to find oil throughout the world in order to light the lantern; it's one of those details disappeared from the latest titles that however greatly enhance immersion in a virtual world.

The greatest thing about Dragon's Dogma is undoubtedly its combat system. This is hardly surprising, considering that we're talking about a game made by CAPCOM - its action titles are well known and specifically, Dragon's Dogma director Hideaki Itsuno was also the director for DMC2, 3 and 4.

The influence is clear from the start. There's a normal and heavy attack, of course, and there is also a bunch of skills you can learn (from the innkeeper, strangely enough) depending on your weapon. Each vocation (the moniker used here for class) can only choose from a handful of weapons, such as sword/mace and shield for Fighter, Staff for Mage and so on.

At the beginning of the game you can only pick between Fighter, Strider (a mix of Rogue and Ranger) and Mage. Later, it's possible to switch to an advanced vocation (such as Warrior, Ranger and Mage) or a hybrid vocation (Assassin, Magick Archer and Mystic Knight).

As a Fighter and then Warrior, my main character fought in frantic melee combat that felt a lot like playing Devil May Cry. There's even a jump attack and a few skills which launch enemies into the air; overall, it felt very satisfying to vanquish enemies as it required accurate attacks rather than simple button mashing.

While this is no Dark Souls in terms of difficulty, the AI demands a rather tactical approach as it's easy to miss without taking care of where the strikes are going. Furthermore, each enemy has its own weakness and special attacks: for instance, the Hydra will try to eat and swallow characters, harpies attempt to grab and then drop from a great height, wolf packs strike together and then drag you along for a while.

CAPCOM is also known for the memorable boss fights often found in its games and Dragon's Dogma doesn't disappoint. Some boss fights are quite long and require players to strike specific vulnerable spots of the monster in question. Overall, I feel that the developers were able to strike that elusive balance between challenge and frustration for combat.

Your Arisen character is accompanied in his/her travels by up to three pawns. According to the lore, pawns come from the Rift, an otherworldly place that connects multiple worlds (and Arisen).

The main pawn can be fully customized by the player in appearance, name and vocation. However, the other two pawns are of the support type - these have to be hired (with Rift Crystals). The ingenious part is that these are not mere NPCs, but rather they are main pawns of other players (unless you are offline, in that case the game will use preset and randomly generated pawns).

As a result, you may be hiring the main pawn of a friend to travel with you. There's more to it, though: as pawns travel with Arisen, they gain knowledge about quests, locations and enemies and they will take it all back to the Arisen who created them.

It's a really intriguing system, particularly considering that the game originally came out almost four years ago. I've even enjoyed their chatter - though it is repeated too often, it does provide interesting information about places and characters from time to time. There are a couple of caveats, by the way: support pawns do not level up like the Arisen and the main pawn, so it's best to swap them once in a while.

Also, it's important to keep an optimal party setup in mind. For example, I coupled two mages (one Sorcerer and a Mage, to be precise) with my Warrior so that they could take care of ranged and flying enemies, which were kind of an issue for my melee character.

This is a very important factor for an action RPG that relies so heavily on combat. PlayStation 3 and Xbox 360 were limited to 30FPS, but now that's all in the past and the great action in Dragon's Dogma can really shine.

There are several improvements to the graphics itself, of course, starting with the uncompressed assets and support for up to 4K resolution. As you can see in the screenshots available in this review, the game can look quite nice at times, but it is also undeniably far inferior when compared to more recent games in this regard.

Both low resolution textures and low polygon models/structures are visible to the trained eye. That said, the art is well done and it's a great help to mask those issues. Overall, performance is good as usual with the MT Framework, despite a few hitches here and there.

In conclusion, I would like to commend the excellent audio for both ambient sounds and songs. 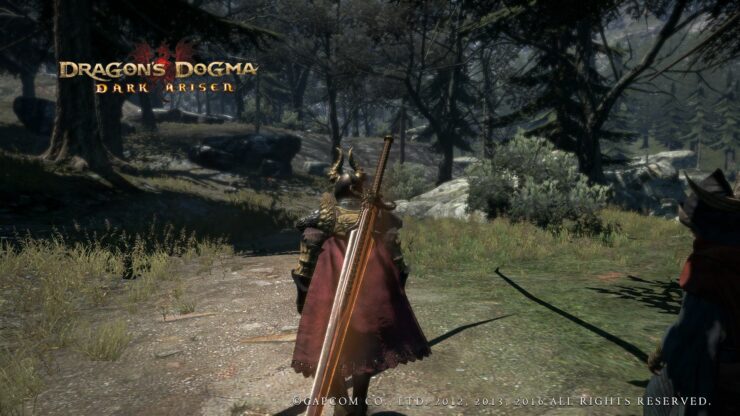