Blizzard is a studio with several classics under its belt. Many a PC gamer grew up on Blizzard titles like Warcraft, Diablo and Starcraft, and I'm one of them. Despite the toxic work environment, which means you're allegedly more likely to get abused than to be offered a cup of coffee, I can't help but deny the calibre of their titles. It's a shame the company is seemingly rotten to the core, guilty of inequality of harassment, facing several ongoing investigations and lawsuits—anyway, the game. Following Warcraft III: Reforged, Activision didn't trust Blizzard to develop Diablo II: Resurrected, handing it over to Vicarious Visions, leaving Blizzard in charge of the backend and Battle.Net integration. 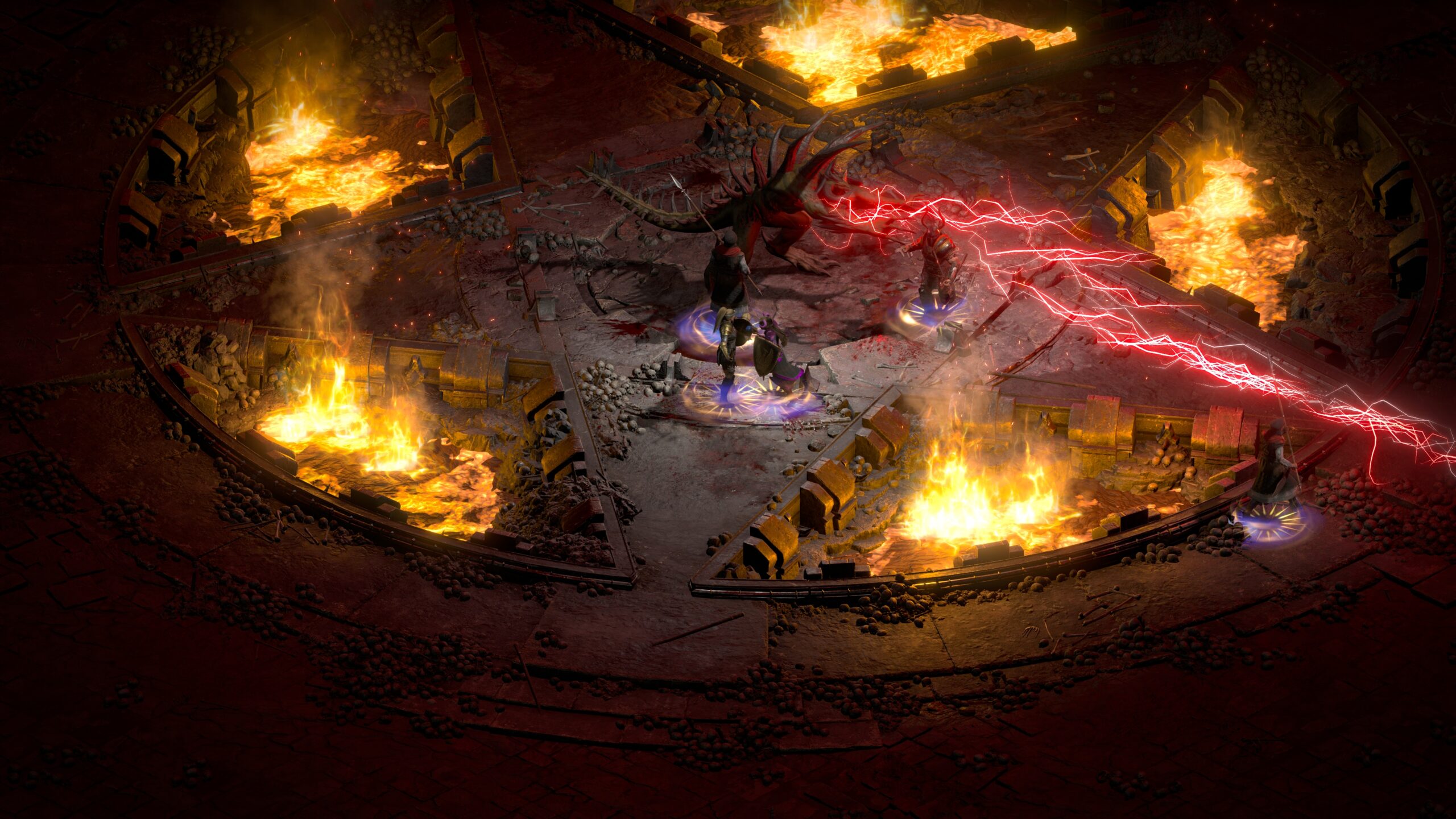 Unsurprisingly, when the game first launched, the backend and connection to Battle.Net was utterly shambolic. Complaints rang around the internet about the inability to maintain a stable connection to the online mode of a 21-year-old game, remembering that connection issues weren't an issue for the original unless my memory has failed me. It's not unusual, most modern releases have server issues at the start, but it's not something you can forgive from the big developers and publishers. Indies don't have the financial clout to prepare thoroughly; these do.

Now, a few weeks ahead, the server issues have quietened down a little. It's not quite ideal yet. I've had a few times where I've timed out due to work or other matters, and Battle.Net has thrown a strop and will not let me reconnect unless I close the game. It may be a PlayStation 5 only issue, I don't know if the same thing happens on the PC, but it's something that's hit me twice now. Is it major? No, of course not. Is it irritating and a mistake from Blizzard? Yes, it is.

Enough of the backend issues; let's talk about something else. I can't help but praise Vicarious Visions in their development of Diablo II: Resurrected and the aim to keep this as close to the original as possible. Much like many things you see in the game, this is a relic, a fossil, a spirit of a bygone era, and it's proud of it. Diablo II is the Action-RPG that defined the genre and still does to a fair degree. While a few quality of life changes have happened, it's still the game we all loved.

We did love it, don't deny it. That or you're one of those young people who never got to play the original when it was released. If you are one of those people, this is me telling you to stop wearing your baseball cap backwards, stop listening to rubbish space music, and stop wearing your trousers halfway down your arse. Also, play this. While Diablo III was decent, this shows you what Diablo truly is, and it shows you on a level that you've rarely, if ever, seen before. 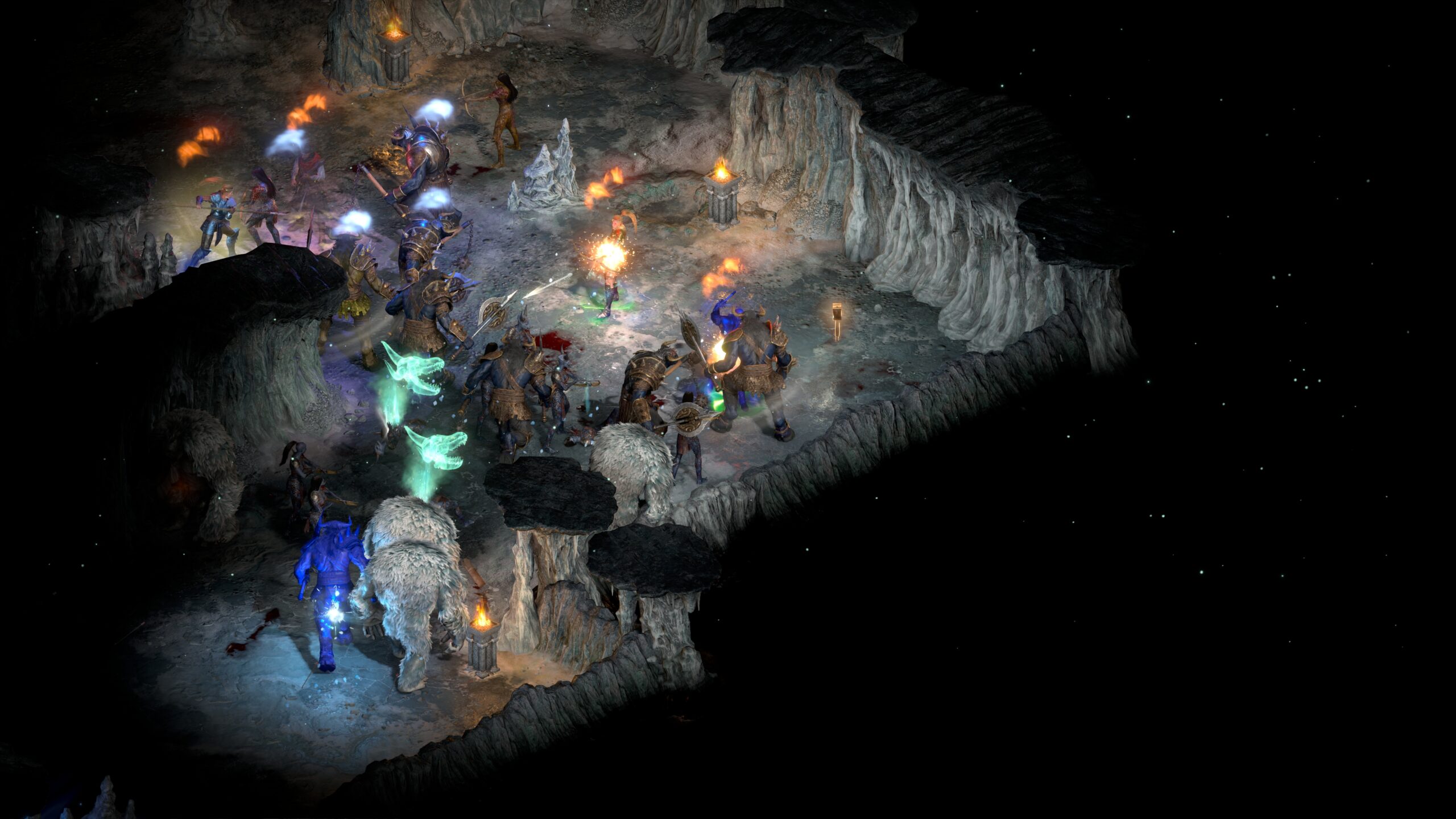 Diablo II: Resurrected is a game with masses of content, but it's also a game that makes you work for that content. Most ARPG's now will have a large amount of protection for you and your character. If you die, you may lose some of your hard-earned gold, or your equipment will take a significant durability hit. Sometimes both. You rarely find a game that will strip your character bare and send you packing back what is often a fair way back. The checkpoints in Diablo II: Resurrected make the Souls games' bonfires look friendly and abundant. That's how I like and remember it.

The original, and by extension this, is full of grind. I would argue that this is grind before we viewed grind as negatively as it is now. It was a level of grind that was rarely tedious thanks to a robust variety of skills and spells across a handful of characters that felt unique. It's almost pointless for me to run through every character and have multiple trees to go down, letting you choose your path. It's pointless for me to tell you that I have returned to the same sort of character I was playing almost two decades ago, a necromancer that loves to raise little skelly-buddies to molest all of the creatures and demons around.

With Diablo II: Resurrected, you'll find yourself fighting through five huge acts: The four from the original, and then Lords of Destruction acts as the fifth and final act. There can never be an argument that all acts are equal - some parts of the game are more interesting than others. If you look at it as an extended story, not separating Lords of Destruction expansion from the original, this is a fantastic package. It offers as much, if not more fun than most modern titles, with the great gameplay that came with the original, packed full of story, quests, and world-building.

That's when you come to the bosses and return to the grind. Quite often, you can feel like you're blasting through the game, then you find yourself hitting a brick wall. This is especially true when you move into the higher difficulty levels, and death sends you packing, your inventory left by your now-rotting carcass. 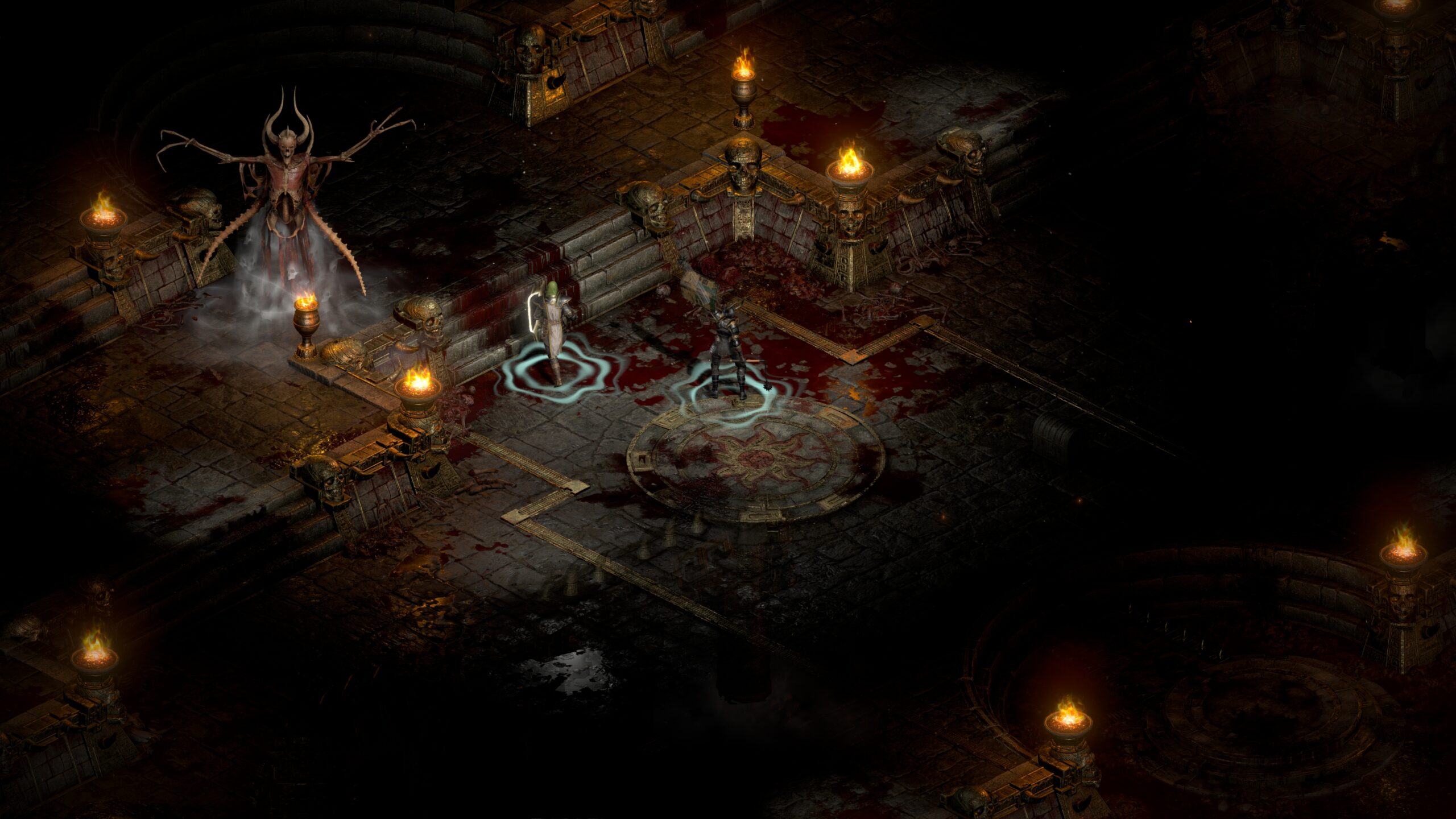 All this is talking about something you all likely already know. Diablo II is one of the best ARPG's ever; it wouldn't make sense to change the core components that made it this game. Knowing that, let's talk about what this version, what Diablo II: Resurrected, does different. The first significant quality of life improvement is, at least for me, a hot bar. I played it on the PS5, which I thought was blasphemy, but I have to admit it's been a good time. The original is an old game before hot bar sensibilities were a thing, so this implementing it makes perfect sense.

Other quality of life improvements include a shared stash space, meaning no more alt bank characters. You also pick up gold automatically, something that was always necessary for a game coming to consoles. I genuinely wish they had gone just a few steps further with quality of life changes. I had genuinely forgotten how minuscule the bag space was in the original. I remember now, and it's infuriating. Sure, you can use a return to town scroll, but I want more bag space. I also think this could have worked without breaking the balance of the game.

Looking at more changes, the core thing you'll notice is a considerable change in visuals. You can switch back to the old school view at will, something I enjoy doing to see how much can be done with such an archaic title. It's just great, much like it was in the Command & Conquer Remastered Collection, to be able to switch at will to the new and impressive visuals, and knowing that they're essentially a veneer over the original. 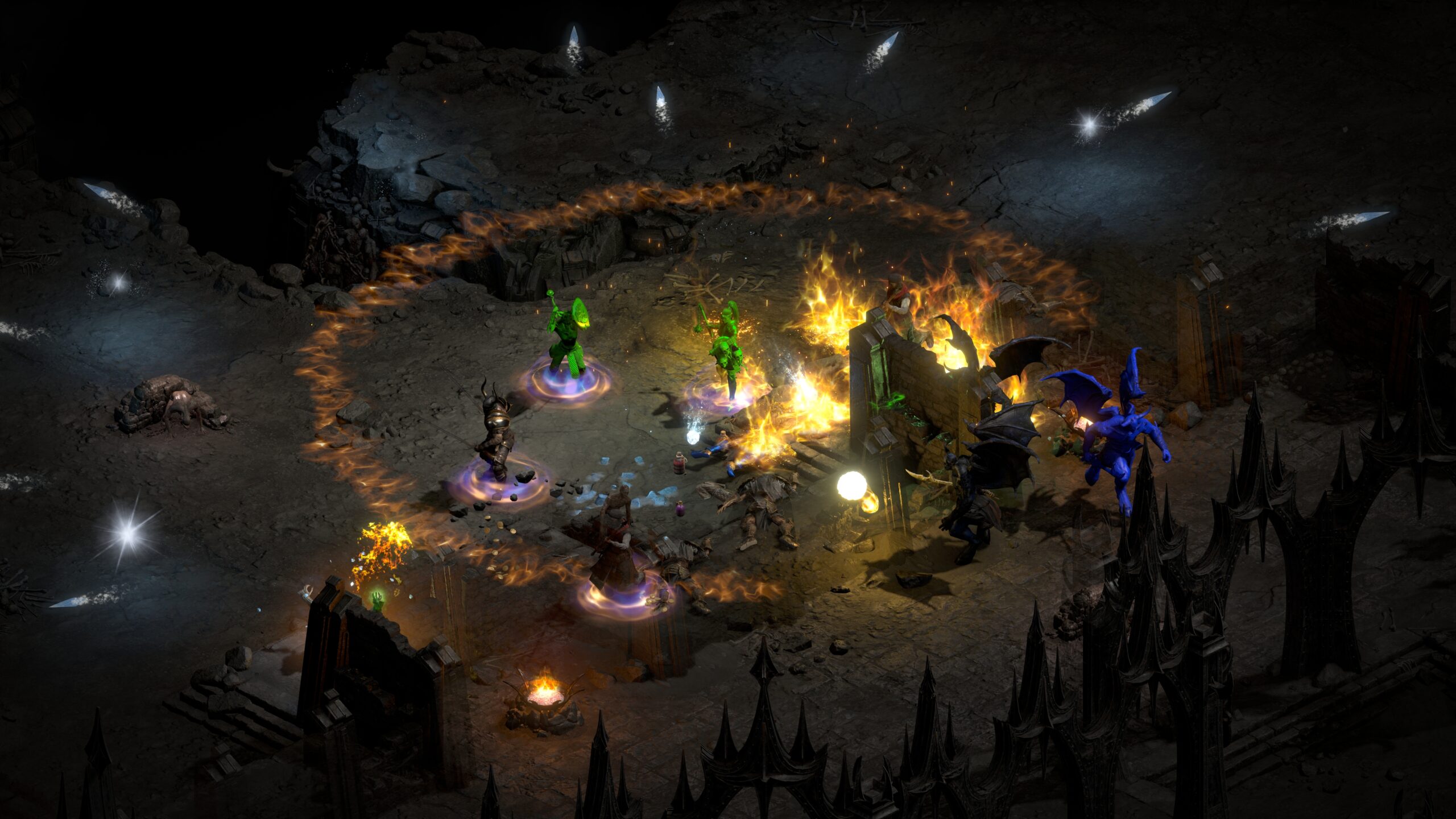 If there's any difficulty in playing Diablo II: Resurrected, it's that... well, every square inch of the game has been meticulously documented. If you want to know the perfect build for a class, the internet has you sorted about a million times over. You can always play this as though you don't know anything about the original, maybe you don't, or you've never heard of GameFAQ's. It's not something I can hold against the game, it's a legend. It's a true artefact and worth any place in the gaming hall of fame.

Would I recommend Diablo II: Resurrected? Yes. Do I think they're charging too much for it, particularly when you remember that EA (yes, EA) charged half the price for the Command & Conquer Remastered Collection? Also yes. Still, a high price for this extended remaster (not just a remaster, but not a remake) doesn't mean it isn't a great title.

Diablo II is one of the best ARPG's in gaming history, and Vicarious Visions haven't made many changes for Diablo II: Resurrected. Visually, there's a stark difference and it looks great while keeping the atmosphere. A few quality of life changes help keep this fresh and make it playable on consoles, but it just doesn't go far enough at points. This ageing master may have had a facelift, and it's one you can have a fantastic time with, but you can hear the creaking of its bones.