I'm going to spoil my review of Desperados III right from the beginning: This is a bloody good game. No, that's a lie, it's a great game. I had a lot of confidence in Mimimi Productions, the developers, after their previous outing with Shadow Tactics: Blades of the Shogun. A confidence that was solidified when I had two previews of Desperados III at Gamescom in 2018 and then 2019. The final result is here and, as I've already said, it's a great game.

The way that Desperados III makes itself a great game isn't through being extremely flashy, though that isn't to say the game doesn't look good - it does, though a little samey - nor is it through what you could class as an excellent story, though that also isn't to say the narrative isn't compelling, it is. Desperados III is great through the masterful use of puzzles, through a strong cast of varied characters supported by fantastic environmental storytelling. 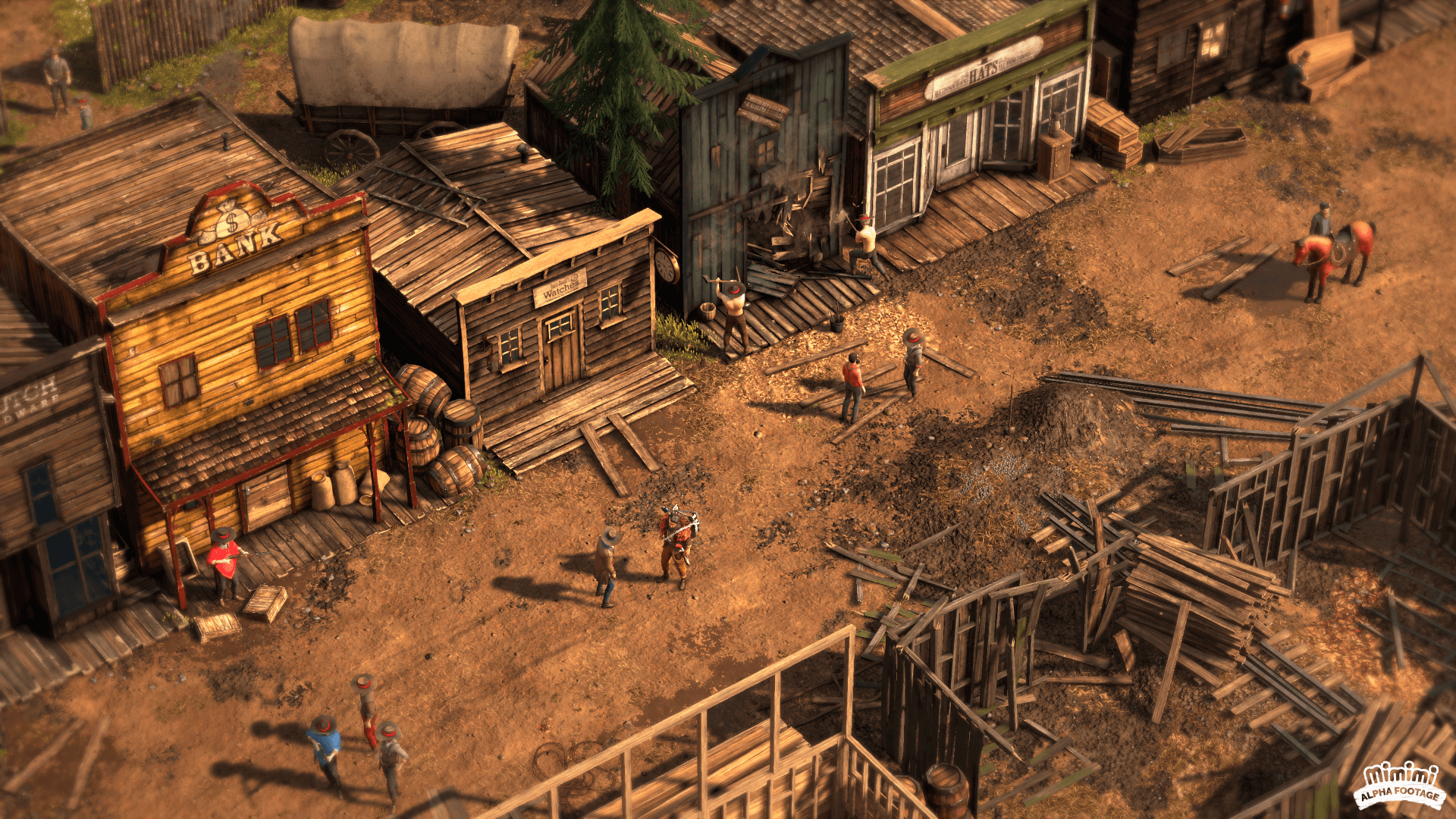 Let's talk about environments because that's what Desperados III is all about. From the very start, the game asks you to assess your surroundings and work with what limited resources you have at your disposal and can find around you. Overwhelming odds are the name of the game, getting into a straight out gunfight is rarely going to end in any way other than death so you're going to use height, cover and misdirection to your advantage. Not only that, but you're also going to use the mystical quick-save and load keys, more on those later.

Each level in the game is crafted in a way that isn't exactly open but offers enough variety and choice that you never feel constrained. At least not constrained by the map itself. Do you take a rather direct route, picking enemies off from afar with throwing knives, darts, rifles and of course the wild-west faithful, the pistol? It's always an option, but a risky one. Otherwise, you can be a sneaky devil, one who watches the movements of those you'll be picking off or sneaking around.

Do you hide in the bushes, waiting for a guard to patrol around and just happen to step in Hector's very large and very dangerous bear trap? Maybe you pop down Doc McCoy's medicine bag, luring the unsuspecting victim into a gas trap that stuns them, then you head up and give them a swift conk on the head to subdue them. Or you could just kill them, that's certainly a final solution. The issue with subduing is you then have to spend valuable time tying them up and moving the body into some of the tall grass, out of the view of other guards.

The options are varied, aided by the equally varied tools and weapons used by the five characters available in the game. Playing a certain way also unlocks badges through performing specific challenges, which can be anything from not killing an enemy to not being spotted, or rescuing groups of hostages to speedrun challenges. What isn't exactly varied is the difficulty, or at least the learning curve. 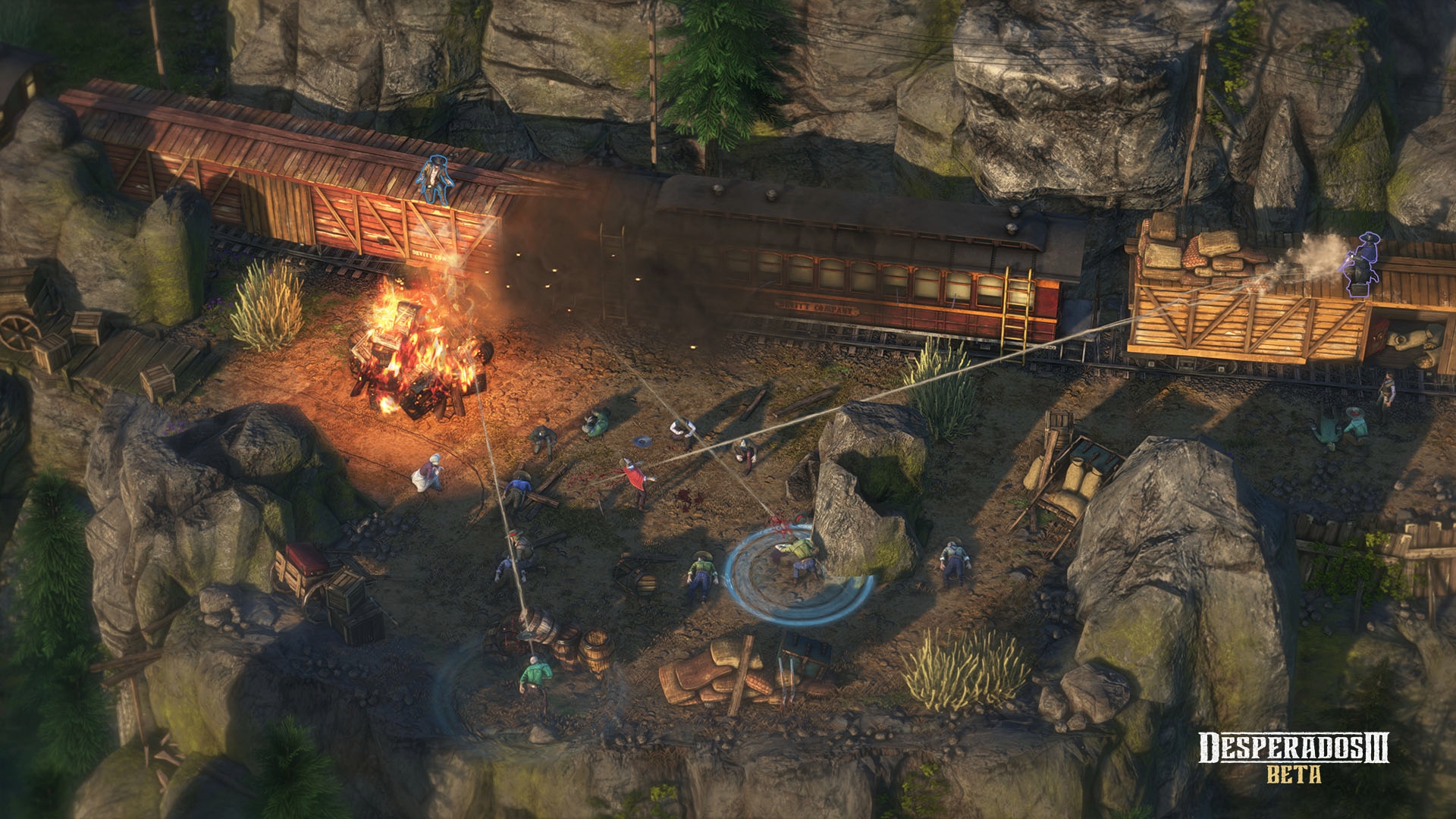 No matter the difficulty, you're going to find Desperados III a challenge. It's not an unfair challenge, one where the game expects you to do something unreasonable. Everything is about watching, learning and the time-old effort to try and try again. Specifically, the game requires a good level of choreography in your moves, pushed forward by showdown mode. Showdown mode allows you to pause the game and plan a series of moves, all of which are implemented in your chosen order, acted out as if in a ballet.

Well, that is unless you weren't timing it right. A guard walks around a corner, spots you about to drop a whole load of bricks on some unsuspecting fellows head and calls the alarm. You end up full of more lead than a battery. You reload, remembering now to leave a distraction, slowing down the guard or taking the guard out with a trap, or a well-placed bullet. The bricks come down, your target is crushed, you squirrel away ready to make your next move.

Using the view-cones of your enemies, timing their routes, planning the perfect way to take out people isn't the fastest of games. I can honestly imagine people coming into the series expecting some sort of wild-west shootout. It's possible, given the perfect elements are in place, but for the most part those people are going to be disappointed. This isn't Red Dead, this is primarily a thinking-persons game.

It should be said that the ability to pause doesn't apply on the hardest of difficulties, though I'm still running scared from that. This is a game with a steep learning curve, but one where the immense satisfaction comes from simply passing a challenge, never mind doing all of the bonus targets. Still, the game puts no time limits on you and, even better, as you complete levels you can go back with your increased tactical abilities and try again.

Some challenges that appear later, once you've unlocked the baron, have you trying older levels under very specific conditions. Often, the levels are far from what you would recognise from before, introducing some surprising twists. This adds an exceptional amount of replay value. Also, adding replay value by giving you a little insight into your play style and helping you improve is a replay feature at the end of each mission, showing exactly how it progressed and what happened. 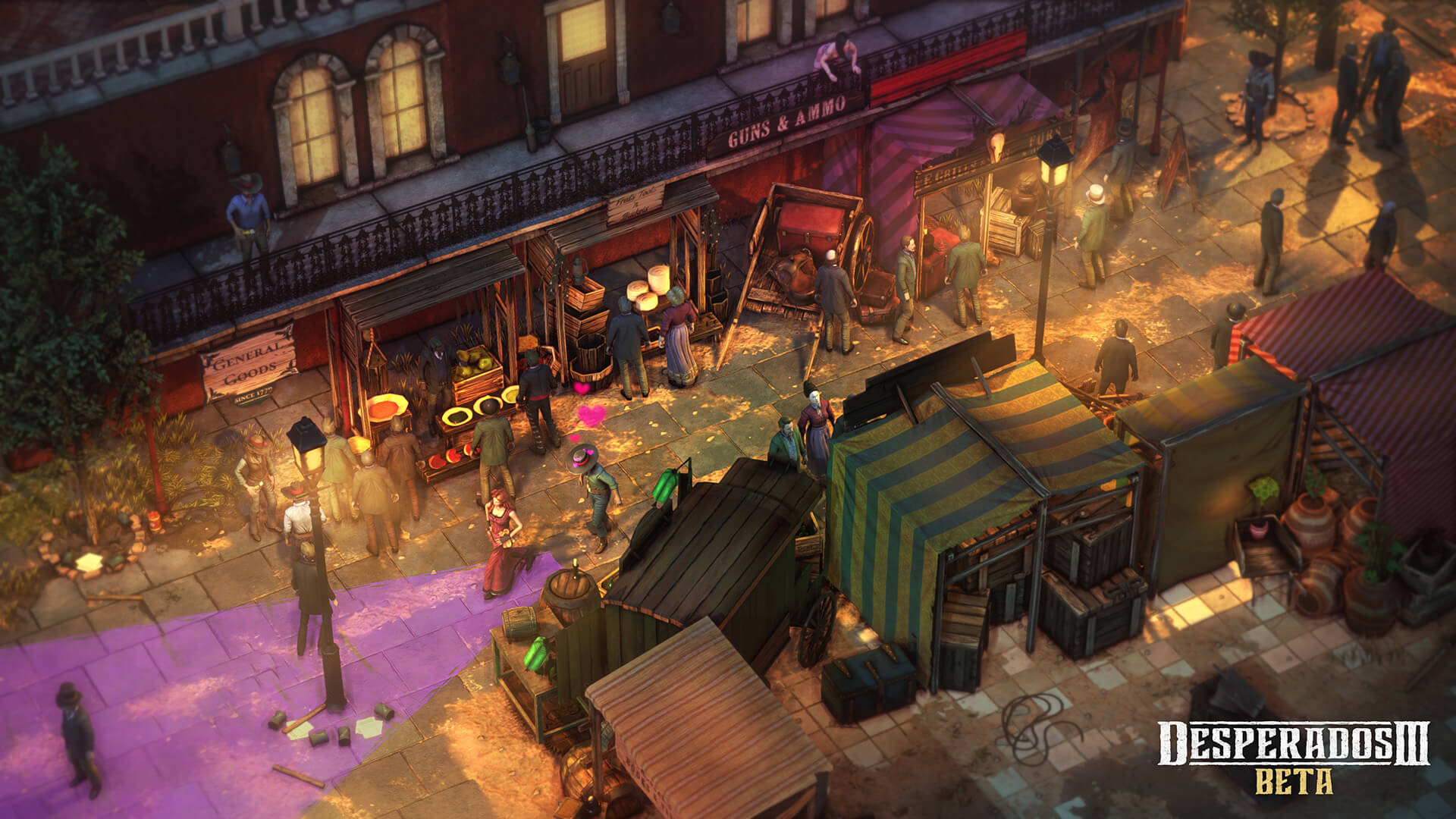 So your story is a simple one of revenge because they all are. However, as a prequel to the earlier titles, this is also an introduction to the Cooper we know, as well as other characters. I can't say I'm exactly enthralled by any of them, they're perfectly serviceable. They're at their most engaging not during cutscenes but in a mission, dropping one-liners, comparing their killing abilities or making small quips about the enemy.

You are going to hear these a lot though. The time you spend on the game can easily clock over 30 hours. The maps are large, multi-stage affairs and you're going to find yourself quick-loading a lot. I'd recommend keeping the quick-save alert at about five minutes.

I should say that this can leads to one of the only real issues I have with the game, it looks dull. The worst thing is, I know this is an unfair game considering the setting. Desperados III is set in the wild west. You will have a little variety here and there, you will see a swamp and some other bits of terrain. However, for the most part this is a traditional wild west story and setting. You'll see a hell of a lot of brown. Brown dirt, brown wooden buildings, light brown sand.

While the environments are incredibly pleasing to think about, they're not the most pleasing to look at. If it wasn't for the very specific challenges, you'd be forgiven in thinking they were mostly neighbouring areas, like trying to tell the difference between Bolton and Manchester or a grass field next to another grass field. A small complaint, particularly considering the setting, but impossible not to notice if comparing it with the lush and varied visuals in Shadow Tactics. 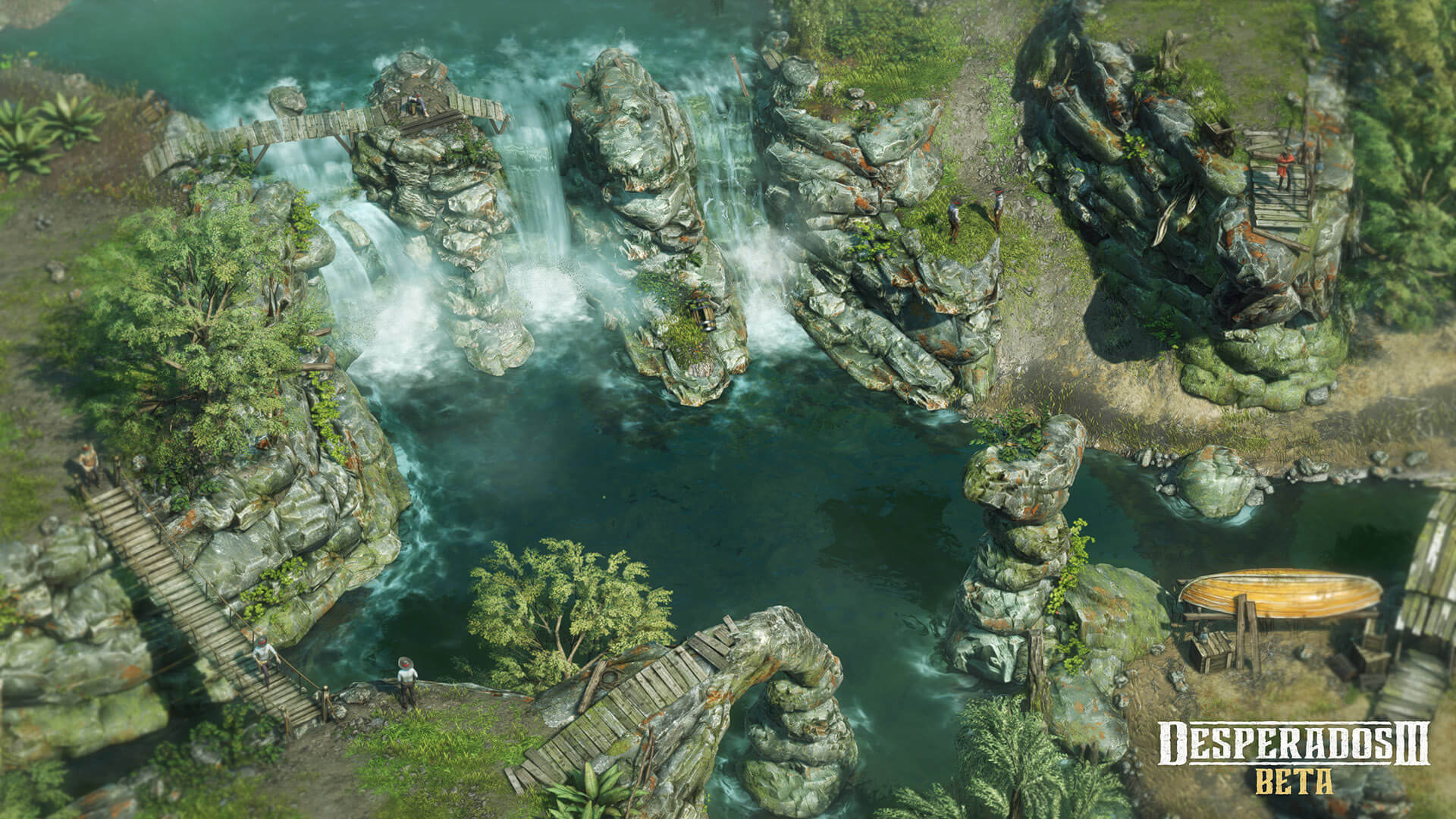 No matter which way you look at Desperados III, it's a triumphant return of the series and quite simply one of the best real-time tactics games ever made. Mimimi Productions have rapidly proven themselves to be one of the most dependable developers in the world when it comes to the genre, even surpassing their previous outing of Shadow Tactics.

I mentioned earlier about the immense satisfaction of completing a challenge, as well as the likely frustrations with the slow pace of Desperados III. This is, to me, the key aspects that will determine if you like the game or not. Coming into it, knowing that this is a game that will challenge you, allow you to think outside the box and use your brain more than your reflexes, you'll find that this is an outstanding game.

Following on from Shadow Tactics, Mimimi Productions have continued their excellent form with Desperados. While the maps can be a little dull and the game arguably slow, the level of tactical nuance and environmental storytelling, as you progress through engaging and challenging missions, is second to none. Desperados III is an undeniably great game, the best in the series and arguably one of the best in the genre.