Would it be a fair assessment to say that you don't want to know the ending of a game before even starting it? What then, do you do, when the game is a prequel to one of the biggest strategy games to have ever been made and it takes place during a time that has been extensively covered in the two (three, if you include Cataclysm) games that have come before it?

Homeworld: Deserts of Kharak is set one hundred years prior to the events of Homeworld, during the quest for the primary anomaly, the Khar-Toba, that the introduction of Homeworld talks about. This is what led to the space-faring events of Homeworld, one of the best strategy games ever. Does the prequel, originally titled Hardware: Shipbreakers and not a part of the franchise, though developed by veterans of the originals, stand up to the test? 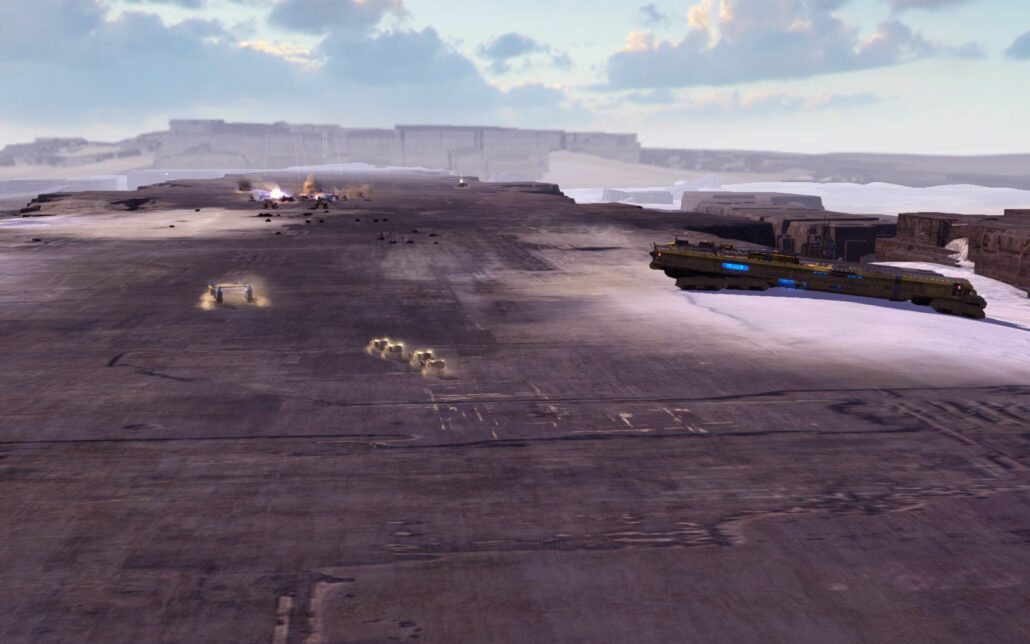 In a word, no. It could be nostalgia speaking, but Deserts of Kharak doesn't quite live up to expectations. It's still an extremely strong strategy game and one that is undoubtedly part of the Homeworld franchise. Despite it being set on a planet, which you would imagine immediately makes it hard to be a Homeworld game, it manages to be more like the originals than any other game since.

The desert setting of Kharak is used with great effectiveness to show the sheer scale that the game operates with, some maps being downright huge. It allows the game to introduce a sense of loneliness that Homeworld and to add merit to the underlying story of being part of a huge, world-changing expedition. A tactical command screen, much like the one found in Supreme Commander, allows you to take in the scale of the maps, but brings with it other challenges.

What seems to be an attempt to further link the game to Homeworld, and a persistent annoyance, is that the UI shares symbols with the previous games even though it makes little sense to use it here. While the design of the vehicles is a blend of normal and futuristic, a tank looks like a tank, but it floats instead of using tracks, there's little reason to use a square to indicate heavy vehicles instead of a simple tank symbol. Everything in the game uses this same abstract reasoning which, frankly, confuses matters, particularly so when building turrets which are just a variety of sticks. A small but constant issue which uses up time as you try to decipher what the icons indicate. 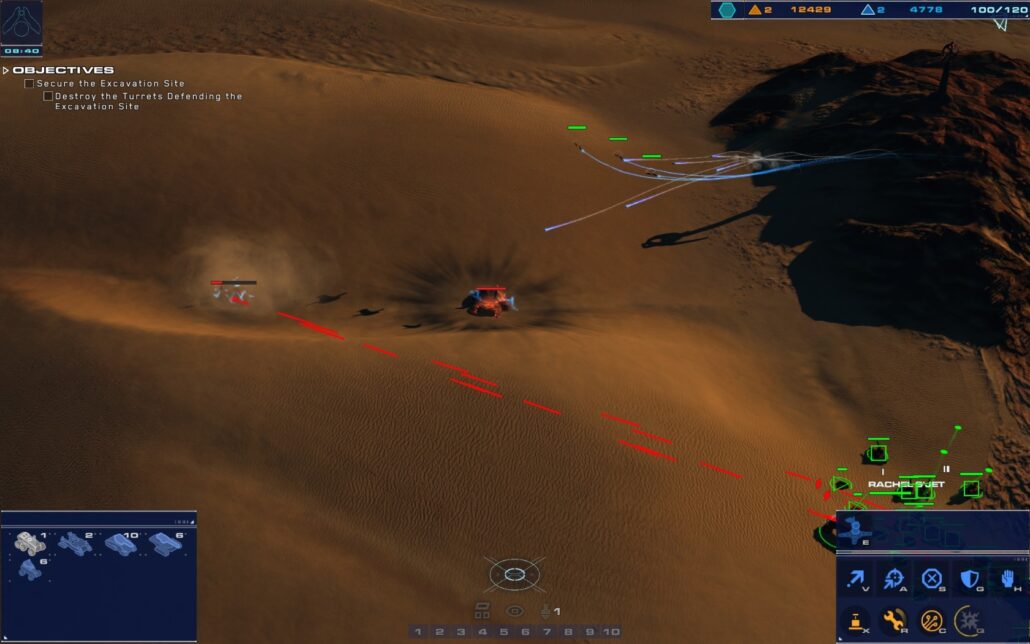 To reintroduce the sense of verticality, Blackbird have used the sand dunes of Kharak to a simply excellent level. Line of Sight played a key role in strategy games for as long as I can remember, terrain height has often been a factor in gaining an advantage, but there's much to be said for the tactical advantage gained by waiting half way up a large sand dune, letting the enemies roll over the crest only to get picked off by overwhelming fire and demolished before the height can give them an advantage. The use of terrain for range, cover and as a means of escape is done to such a level that it's hard to think of many in recent years that have been this good.

What makes it more important is the slow pace Deserts of Kharak runs with. Only two levels out of thirteen in the campaign place any real sense of urgency on you in moving forward, with the rest happy for you to move forward at your own pace. It's a game that removes itself from the twitch based gameplay of such as Starcraft II, allowing for a more methodical and planned approach with tense moments due to resource limitations and an excellent variety of units that endears itself to planning unit groups and coordinated movements. 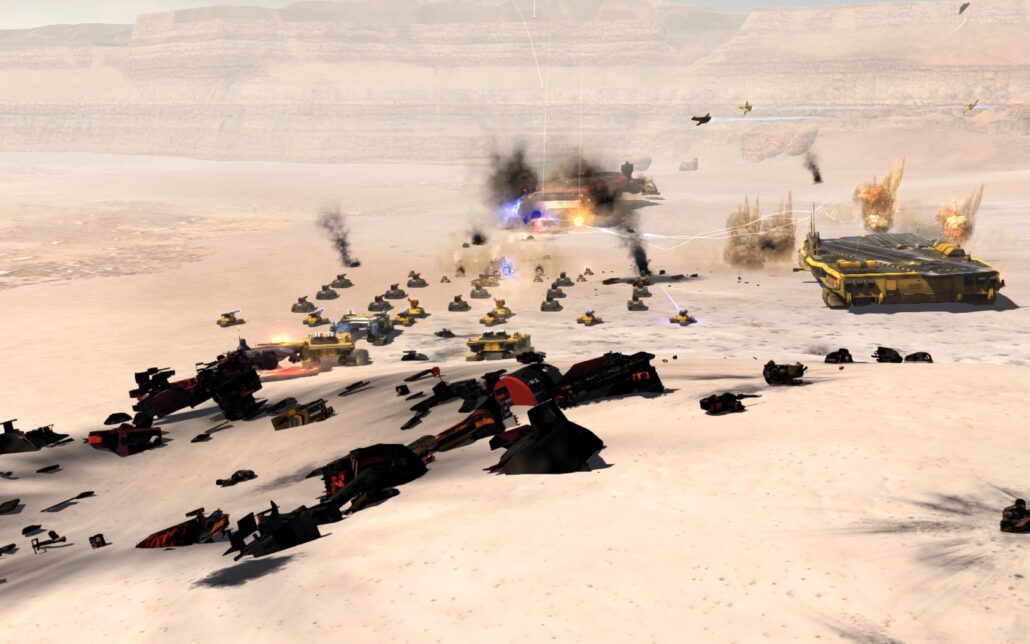 The Command Carrier Sakala is your mothership for the duration of the campaign, acting both as your movable base of operations, a factory to pump out your war-machines and also as the main hub where your salvagers deposit much needed resources to push you forward in the persistent campaign. What it does also do is taking a more active role in dealing death to your enemies through the use of on-board planes, cruise missiles and its own means of attack through rail guns and rockets.

All of the units in the game are vehicle based, with the Armored Assault Vehicle being the backbone of any force and acting as any regular tank. Variety comes in with Railguns, offering much needed range, but easily countered with the fast Light Attack Vehicle and cruisers, slow moving but packing a huge punch, with artillery cruisers and battle cruisers, the latter simply being a mega tank. Support vehicles are also available, from a support cruiser that repairs your units and salvagers, which are your resource gatherers, gathering resources placed around the map or demolishing wrecks of star ships and salvaging resources and artifacts from them.

Artifacts collected from these salvaging operations are applied to the Sakala which can improve its defenses, weapons systems and cooling ability. The latter being one of the most important aspects as you have a number of points to allocate to the Sakala, in either armor, repair, weapons or sensors. As you apply more, you are using more energy and generating more heat, go over the cooling ability and your carrier will take constant damage until it eventually overloads. The downside is that while there is a chance of missing a few artifacts throughout the game, there's no other variety or customization offered, as all of them are active, all the time. 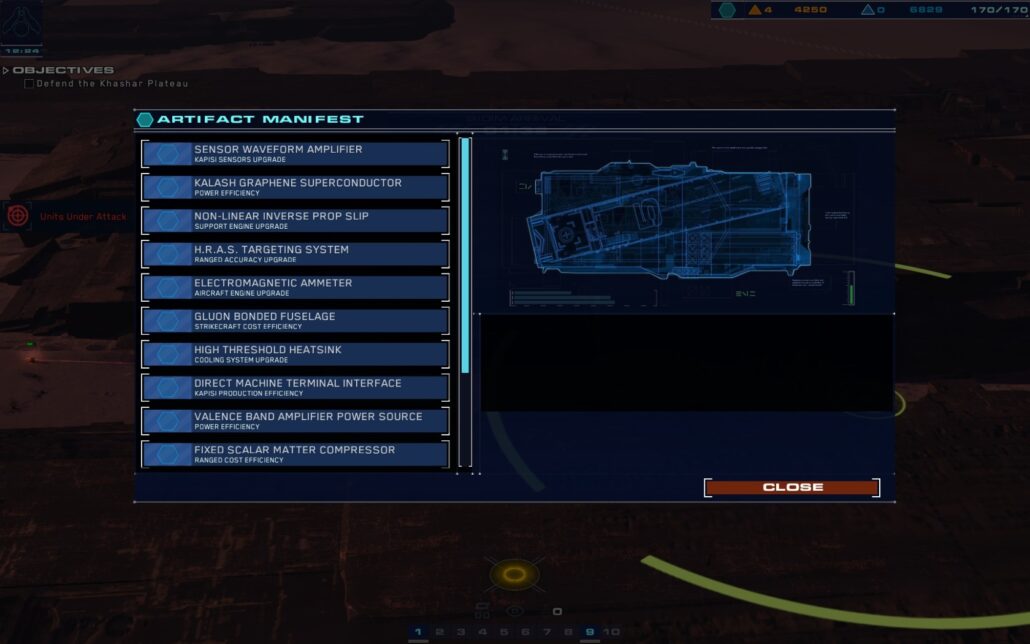 Deserts of Kharak has a number of minor, and some major, issues. The campaign tends to feel like too much of the same thing, slowing down dramatically after the first few missions. While it does offer a number of exciting moments and events, you'll quickly get tired of doing the same objectives time and time again. Compounded into this is the fact that the AI doesn't lend itself to creating memorable moments. It's downright stupid at parts, rarely defending itself from aerial attacks or attacking in any surprising way. The AI issues are visible with your own units too, particularly the aerial units which will circle your carrier for ages in a failed attempt to land, before you intervene and manually force them to.

Where the game really disappoints and annoys is with the camera. Despite Deserts of Kharak being purely desert based, which limits the variety of scenery to a huge level, it still looks brilliant. The vehicles are excellently designed and zooming in lets you see all the small, intricate details found throughout. However, that's about all you can do with the camera. It's limited in how far you can zoom out, you often have to fight with the camera to get a decent angle to see the combat and if you build up a sizable number of units, selecting them all becomes a bigger task than beating the enemy. 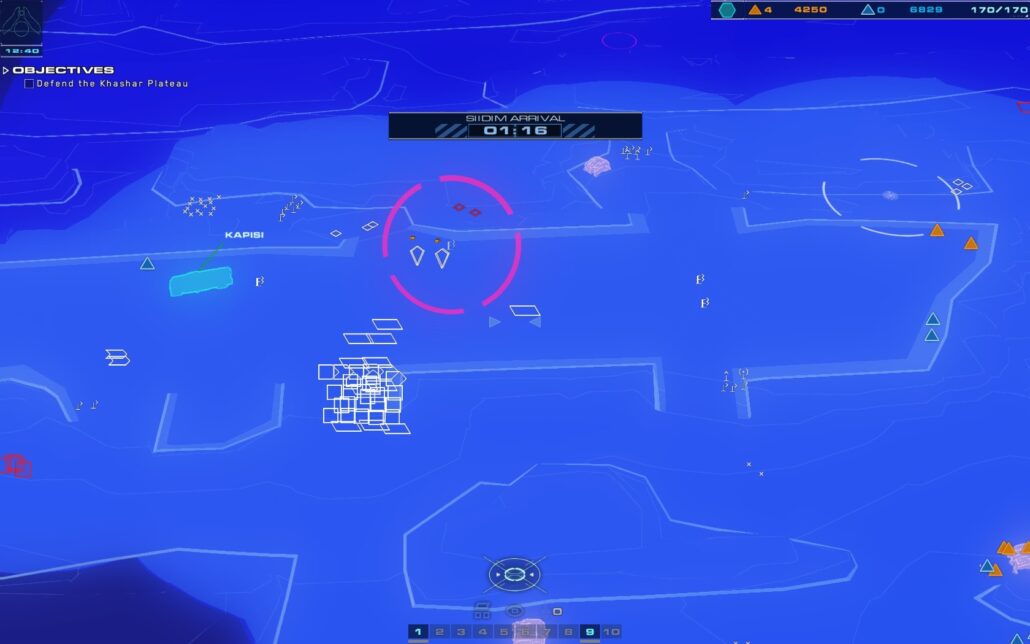 One thing that needs to be mentioned is that the audio design is wonderful. In any battle, campaign, skirmish or multiplayer, there's a large amount of background chatter that feels perfectly natural and offers you a better feel of how the battle is going and indicates any new enemies that have come into range far better than using the camera ever could. Working with this is the combination of excellent ambiance, from the wind in the deserts, the hum of the vehicles and the sounds of a far-off battle, and an utterly fantastic soundtrack.

Strong, with bouts of excitement, is the best that can be said about Deserts of Kharak. The multiplayer is nonexistent, with no community to speak of, but the campaign makes up for it by offering an interesting, albeit monotonous at parts, expedition through the desert which offers tactical challenge when the persistence is factored in. While not living up to its namesake, it's captured the essence and offers a strong entry that's well worth taking the time to play.

While not Homeworld as we know it and featuring bugs and a few issues, Deserts of Kharak is still a strong entry for the franchise and a strong RTS. Offering variety to the fast-paced twitch strategy games that are prevalent, the slow paced, tactical approach on offer here is a welcome change.