Not too long ago I was somewhat slated in the comments section for my comments against the insane exhibitionism and absurdly maneuverable mammary glands on offer in the MMORPG Blade & Soul. Knowing that my review, and mentioning that, brought the ire of people, is it safe to go into this? Dead or Alive Xtreme 3 is a game that is quite literally all about exhibitionism, breasts that ignore the laws of physics and female characters that are of legal age, honest!

I would argue that it's more than safe to move into this because anybody coming into Dead or Alive Xtreme 3 should be expecting exactly that and nothing less. To slate it for the rampant exhibitionism and the fact that it's trying, albeit a little too hard, to make me happy in my pants, would be to ignore the whole point of the game. Or maybe I'm completely missing the point of the game? I'm genuinely not sure. 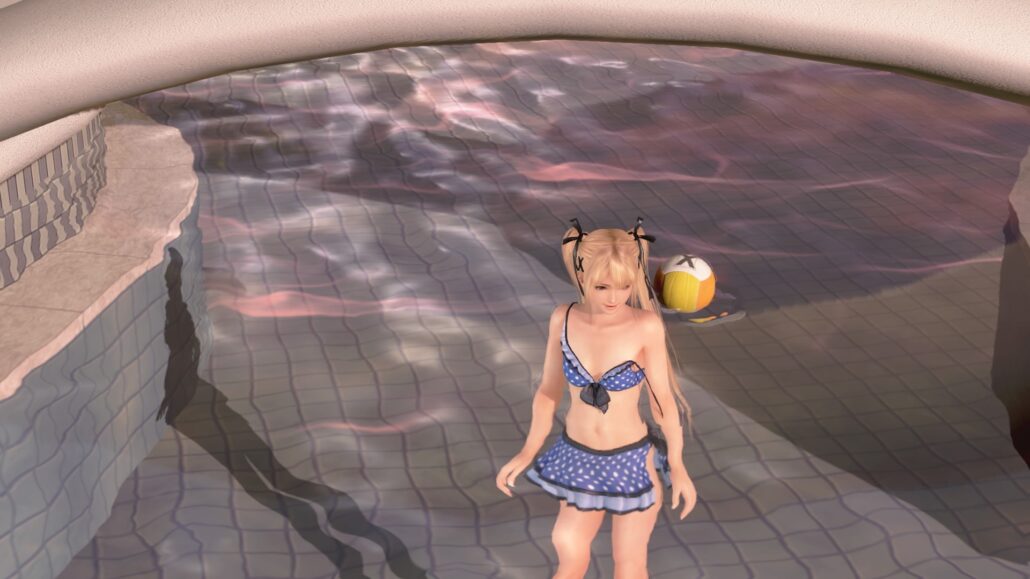 Let's get the obvious out of the way. The women in the game are sexualized. I'm more than willing to accept this sort of sexualization from Team Ninja, particularly so when it comes to the Dead or Alive franchise. I don't believe it makes me sexist to accept it. This is in the same vein that I don't think of myself as a SJW, feminist or any other label somebody wants to stick out when I think there are absurdly dressed females and outright preposterous breasts featured in other games where it simply doesn't fit.

Dead or Alive Xtreme 3 is a game about scantily clad women wearing a variety of swimsuits, playing a number of holiday-resort based games and having a good time. They get to relax by the pool or on the beach, do some shopping, a bit of gambling in the casino in the evening and then do a bit of dancing (warning: definitely not safe for work) for the gratification of all those who've got a ticket from Zack, because of course they do.

To be fair, it looks fantastic on a PlayStation 4. The scenery is good, looking like what you'd expect from a paradise island. The main thing are the girls, who look exquisite: everything is designed with such detail it's hard not to be impressed. During the minigames they'll start to sweat, having appropriate reactions to what happens, showing some great facial animation and as the holiday goes on tan lines will develop (unless you use sun cream) that are appropriate to the costumes that are worn. There are also costume malfunctions. 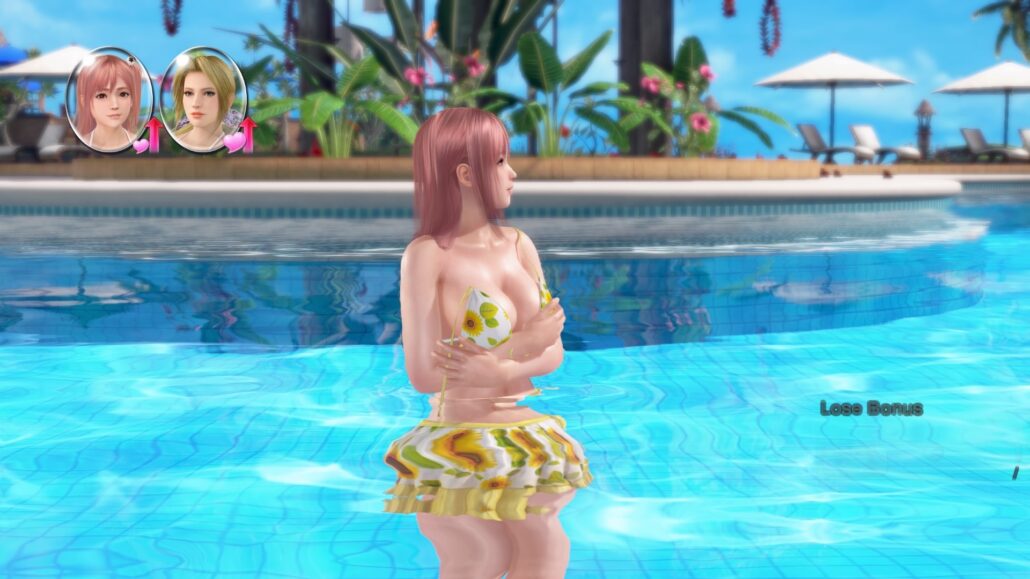 With the tittilation out of the way, what does Dead or Alive Xtreme 3 have going for it? This is where we get to the crux of the matter. The game is worse than DoAX2, losing three minigames but also losing characters, licensed music, CG cutscenes and even multiplayer. The concept of a sequel being bigger, better and with more content seems to be lost on Team Ninja, and it shows. The only new features are a rock climbing minigame and the owner mode.

The owner mode is the core difference found here. Zack isn't in charge of the island this time around, he's having a little break of his own and he gives you, the player, temporary ownership of the island. During the fourteen day vacation (still divided into morning, afternoon and night), you have the option of playing as a girl and taking part in the games, or as the owner and watching the girls while taking a myriad of pictures for a snapshot book that I'm sure will be used as evidence against me in an upcoming trial.

As the owner, you also have the ability to seduce or raise the satisfaction of all the girls by buying them gifts. These gifts can be toys or other random items like sunscreen, to the draw of the game in hairstyles and new swimsuits. Any time you want to during the night you can head to the hotel room of the girl you select when starting the game and get her to change into any of the swimsuits you've bought her and watch her roll around on the bed suggestively. Did I mention that I feel somewhat dirty?

The fortunate thing here is that once a holiday is complete, the girls level is retained and carried onto the next holiday. Combining this with the girl mode (you can switch between each mode at will) makes it quite easy to raise the satisfaction by focusing on one girl at a time in girl mode, using owner mode when needed. There's no lose-state in Dead or Alive Xtreme 3, it's one long game where the aim is simply to buy all the swimsuits, watch the girls play games, or play them yourself, and see how much fun you can get out of that. 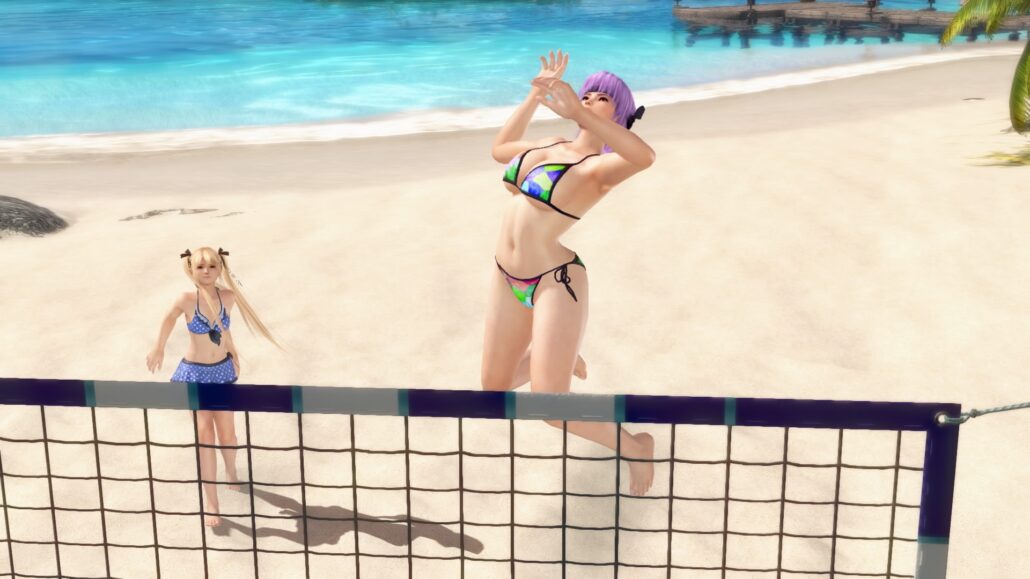 What surprises me about the missing content is how simple it really would have been to bring it forward. In particular, water slide and jet skis would have been perfectly suited for Dead or Alive Xtreme 3 with how effective the soft engine is at showing the girls, particularly so during movement and with the effects of water and wind on the body.

What has made it through to the final product are beach volleyball, flags, rock climbing, pool hopping, tug of war and butt battle. The casino also makes its return with Blackjack, Roulette and Poker; missing the slot machines is negligible, but it would make sense to have included them just for the sake of having extra content. Everything in the casino feels like it's been taken wholesale from Xtreme 2, with little graphical improvement, so I can't imagine it would have been too difficult to do the same with the slots. Needless to say, what does make its return are pole dances, which are just as you'd expect them to be.

It's a sad thing that the most enjoyable elements of Xtreme 3 are those where you don't actually see the girls, that's the casino. The three games work exactly as they should, with no complications. This can't be said for the other minigames: for instance, volleyball has the camera at an angle where it's much too easy to miss where the ball is going. Rock climbing and pool hopping are quick time events. Tug of war and butt battle require you to move left or right to push/pull and hope you've picked correct. Flags is just mash X to win. 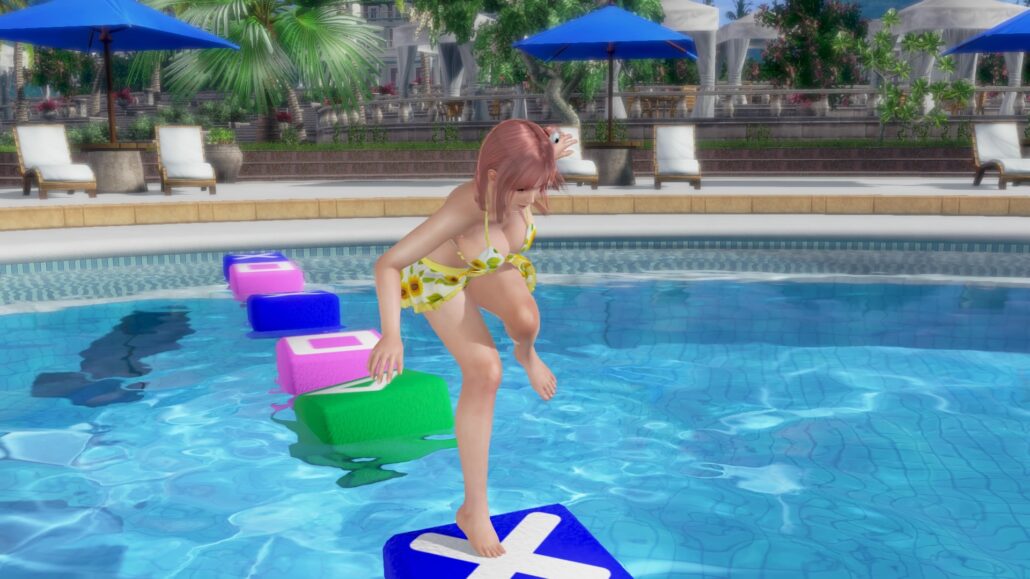 Dead or Alive Xtreme 3 is a collection of minigames that you would be about willing to expect from a demo of a much larger game, combined with a weak dating simulator (of sorts) that feels like the hostess minigame from the Yakuza franchise, but without as much thought having gone into it, and a whole lot of grind.

Should you buy it? I can't recommend it. There's only so much enjoyment you can get out this and the longest I've managed to play it without being bored and deciding that I'd rather do something more stimulating is around three and a half hours (and two of those hours were spent in the casino). Getting everything will take hundreds of hours, but all you'd be doing is playing the same minigames, ogling some well-crafted digital girls while wishing you were in the casino playing blackjack and poker. Maybe that's just me?