Blade & Soul is a free to play game with microtransactions. Review account provided by publisher.

It's taken NCSoft three and a half years to release Blade & Soul here in the west and it's hard to understand why it's been that long. The wait will have been hard for any western fans; some had found a way and played the Chinese version, which is also free to play, unlike the subscription based Korean version. For those of us who have waited for the release, it's finally here, but it's hard to see what we were waiting for.

This delay also means that those with any experience in MMOs in the past will have likely already seen most of what Blade & Soul has to offer. For the rest, there are many YouTube videos and pictures over the net that have highlighted Blade & Soul's few assets. 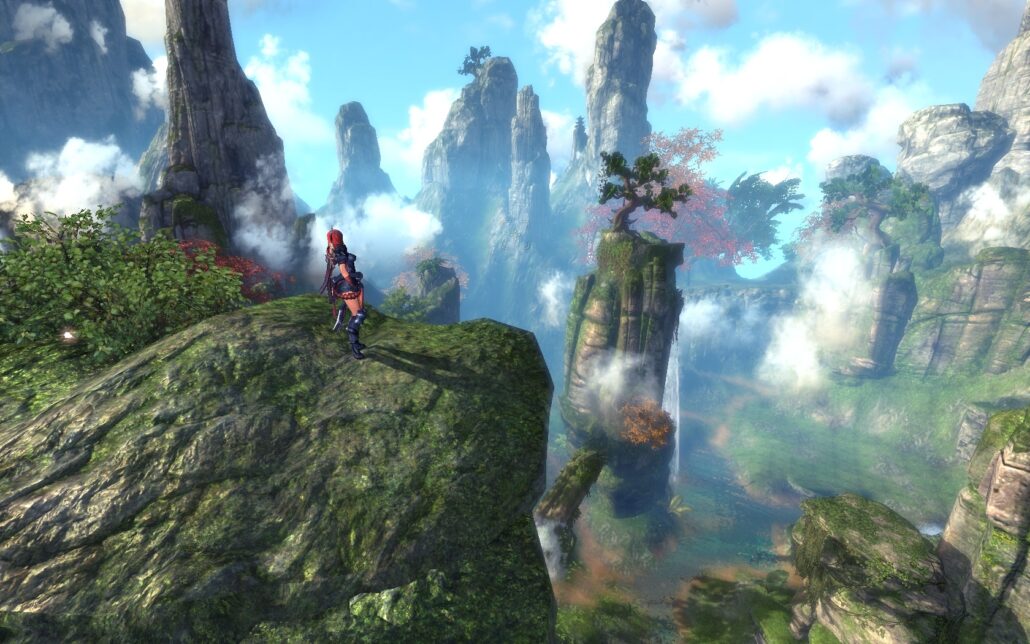 It's actually quite disconcerting how much the breasts of female characters move in this game. The complaints that have been thrown at Dead or Alive will more than stick to Blade & Soul. It's a moot point to say that you'll find skimpy clothes, absurd breasts and breast physics in this sort of game, but basing a whole game on it means it eventually has to be mentioned, which is a shame because the design of Blade & Soul is outstanding.

Environments that you find yourself questing through are downright fantastic, though It never truly feels like an open world, since you're directed to where the game wants you to go. It never feels as cohesive as some other MMOs either, due to a liberal use of portals, moving you between zones that aren't as seamless as they should, particularly so as every entrance and exit to an area is funneled into a bottleneck. Despite this, you'll struggle to find another MMORPG that features as much breathtaking scenery as Blade & Soul.

This attention to detail carries on to every part of the characters. With extensive options in customization, there's little chance of you making a character you personally want. It's not without flaws, sexualization being an obvious focus. The legs of all female characters are downright disturbing in length and any change in hairstyle during character creation make the breasts dance around like it's Saturday Night Fever. This rampant sexualization is also what ruins the best part of the characters - the extensive number of outfits. Both male and female characters have an outstanding variety of outfits to choose from, all exquisitely designed, but sadly having then been placed in the shredder which has removed any sense of modesty for most of them. 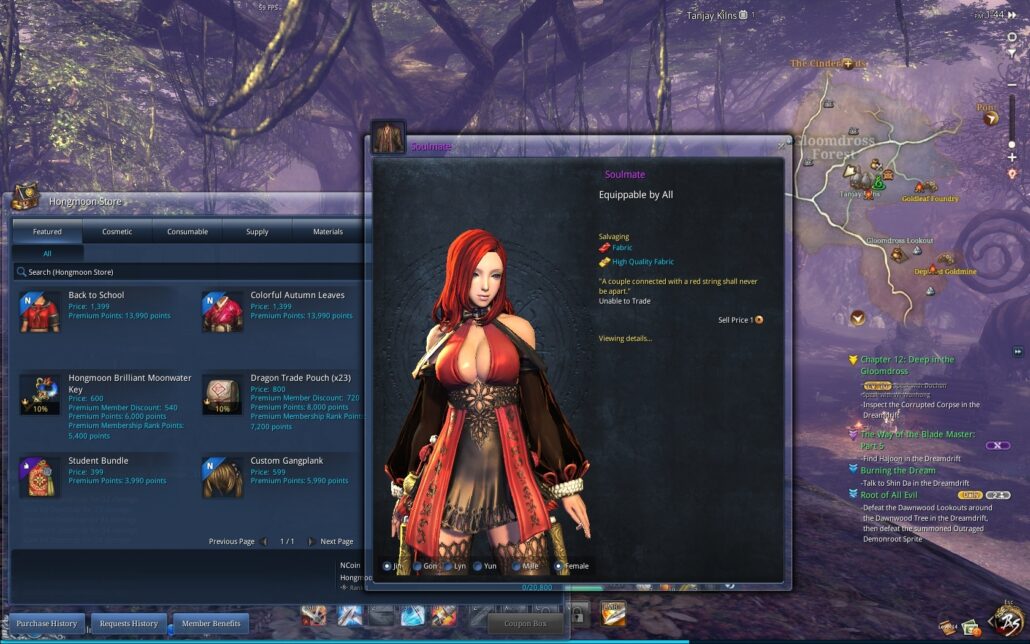 Of course, what matters most is the glue that holds the world together. Blade & Soul features one of the best combat systems you'll find in an MMO, belonging more to a fighting game. It makes for an absolutely outstanding time as, even out-leveled, you can hold your own with precise timing through dodging, combining moves and movements in an almost dance-like precision. At least that's the theory as I was mediocre at best, having come across players with characters who had a lower level than me and getting dominated in the process. I couldn't help but admire the fluidity of combat in those moments, and in moments of watching other players battle it out.

Particularly so when you notice the fact that the vast majority of abilities are contextual. The game never requires you to remember a complex combinations of keys to press, it just needs you to pay attention. For example, getting knocked to the floor will unlock counterattacks with a variety of options for you to recover in, providing you can do them in time. This does mean that you're never overloaded with a huge number of hotkeys, which makes it all the stranger that the UI before you personally fix it, is terribly cluttered.

Noticeable is the lack of any healing abilities in Blade & Soul. There are seven classes to choose from, each focusing on a different style of offensive combat. What this means is that while you normally have a choice of DPS, Tank or Healer in most other MMOs, it's disregarded for a sheer barrage of onslaught in Blade & Soul. Healing comes in the place of potions, food or, primarily, equipment that steals life when activated.

Would that this combat be as equally engrossing in PVE. Some enemies, particularly humanoid ones, will attempt to offer a challenge and match the combo style that you find against other people, but it's a poor imitation at best. Beyond human enemies, fighting regular monsters is tedious at best, you'll end up using the same combination of moves over and over again, going into the same trance as you would when grinding any other MMO. This is particularly egregious as PVP is opened up reasonably early, but only hits its stride later. 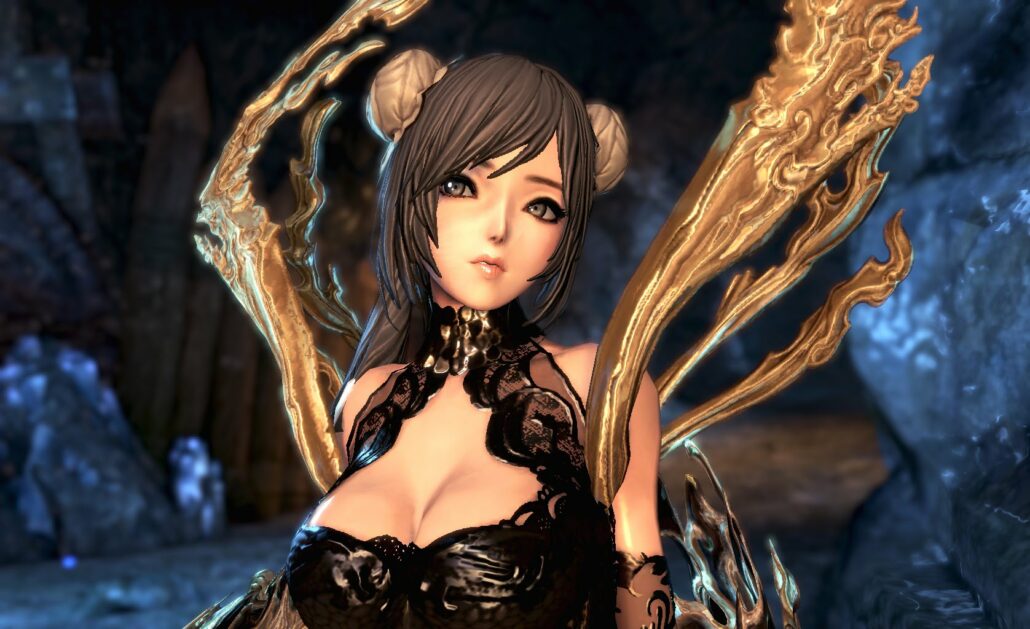 The MMO side is where Blade & Soul is at its worse, and drags down everything else with it. The story features a generic tale of equal parts revenge and saving the world from an equally under-dressed villain, Jinsoyun. She's after ultimate power and will stop at nothing to get it. The story isn't the most riveting out there, but it has its charms, particularly so as the voice acting is fairly decent for the majority of characters. Sadly the questing and grind get in the way, as the parts that will interest you are literally hours apart.

Questing is the crux of the game's problems. The quests offer by far the best way of leveling up but they also offer boredom, déjà vu and an overwhelming urge to quit the game. Everything that you do here, you've already done countless times before, and to a better level, in other MMO's. Particularly bad is that there are so few missions that deviate from the standard fetch, kill or talk to quests, it's barely worth mentioning.

The dungeons will offer some respite, but even they have their limitations. Rarely featuring a sprawling complex that takes time, of the kind you'll find in many other MMO's, here they are rarely of any length or depth. The longest time you are likely to spend in a dungeon is maybe half an hour, though it's never difficult to find a team to jump into one with, with the lack of needing to find a dedicated healer or tank. What remains a problem is that they are all so underwhelming, promising big bosses that will challenge a group, but offer nothing as the bosses are little more than regular monsters with extra health. 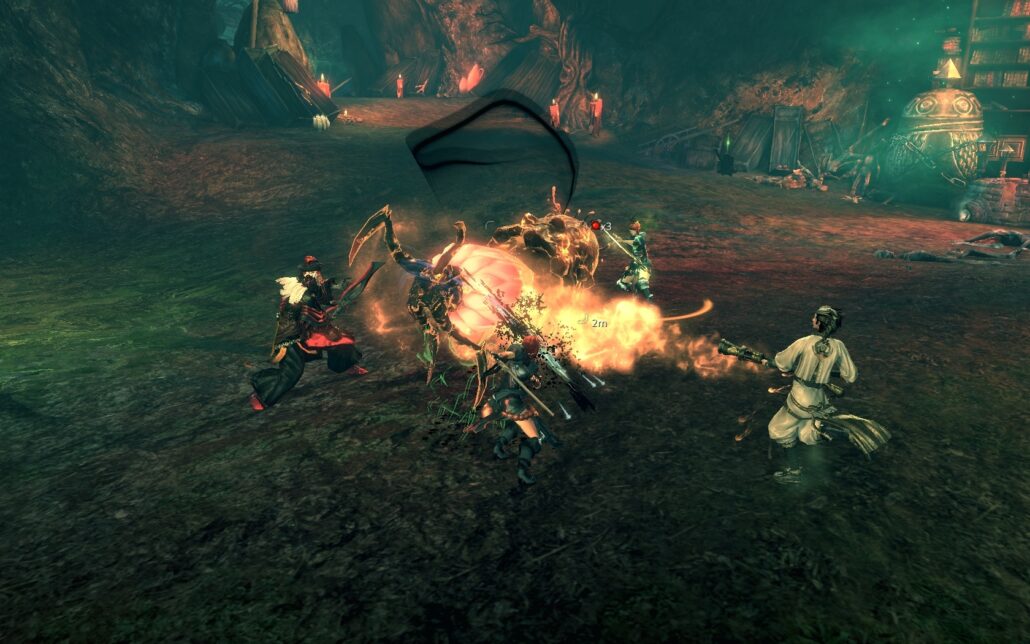 Although Blade & Soul is a free to play game, there's much that can be said about the in game store. While in Korea it may be on a paid subscription, here you have the options of subscribing by paying for premium membership. With this you gain benefits like increased gold and experience, faster recovery outside of combat and a discount on other purchasable items to mention a few. The game uses NCoins primarily for transactions and the membership will set you back 959 for thirty days, 2799 for ninety days or 9999 for a year.

High prices like this also continue with the rest of the store items, though to the game's credit the vast majority of items are cosmetic or items of convenience, such as extra character slots, inventory slots, potions or items that ensure all drops are applicable to your character. The vast majority of items is priced high, a large number of costumes costing over 1000 NCoins each. With a conversion rate of 100 for £1 and 80 for $/€1, a years premium membership sets you back at least £100, $125 or €125 with some costumes hitting £10, $12 or €12. 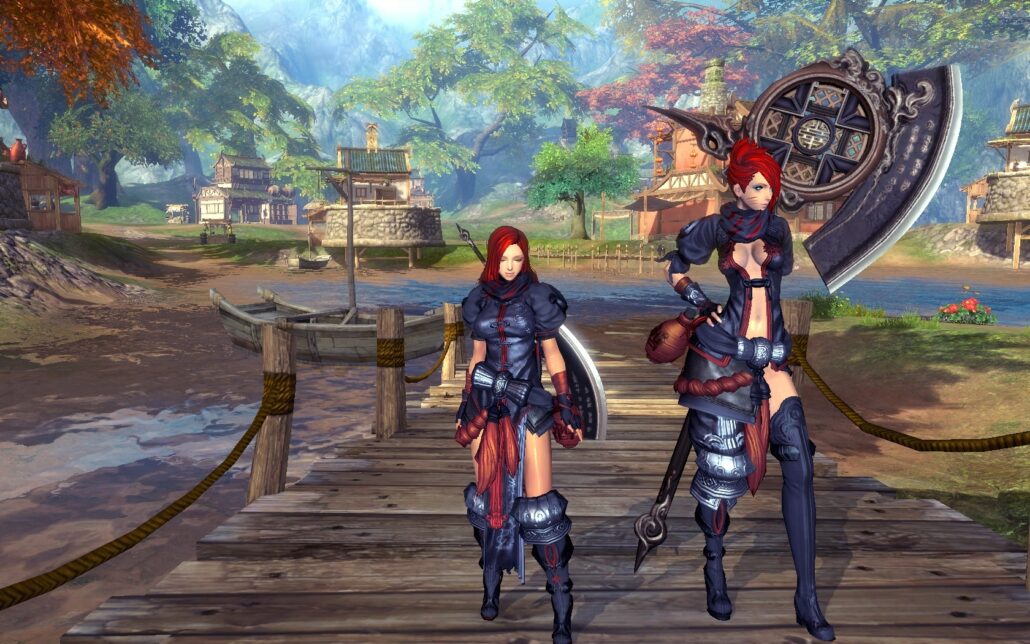 Even gathering and crafting, staples of the genre, are left to wither here. While in other games they can be little more than busy work, giving you a little extra to grind in-between the quests, Blade & Soul have diminished even that, which would have made a nice alteration to the rigmarole of questing. Instead of searching the world and developing as you normally would, here you simply open a menu, click an order for whatever it is you are wanting, provided you meet the requirements, wait around thirty minutes and it's done. The only time you gather materials in the traditional sense is as part of a quest to unlock the next level of materials.

With so much cut down, the rest offering merely a mediocre or worse version of things that have been done before, Blade & Soul is left to prop itself on an interesting and unique combat system with excellent visuals. With little else beyond that, it's hard to imagine Blade & Soul propelling itself to the top of an already overflowing market.

Blade & Soul offers little of fun, beyond the combat. The only reasons to stick around are the visuals, which are exquisite, the late-game PVP and, rarely, PVE. However, the rigmarole of questing, the dull dungeons and general lack of challenge means that the journey is long, boring and, to be frank, not worth the time it takes.