Darkest Dungeon Review – There’s No Hope In This Hell, But At Least There’s Plenty Of Fun

While exploring the more unsettling place you have ever seen in your adventuring career, you fall into a deadly trap. Stress is piling up, and you start fearing you might not make it out of this place alive. Not this time. Despite hopelessness weighing heavily upon you, you're ready to face what's lurking in that room just ahead. The creatures defending those precious heirlooms you have been literally dying to recover are fierce, and your companion fell to despair while fending off these foul beasts. The battle, in the end, was won, but the price to pay was high. Way too high. Mothers will cry the loss of their children, wives that of their husbands. But the adventure will continue, as new heroes pick up the weapons of the fallen, carrying on their legacy.

This is, in a nutshell, how players will feel like playing Darkest Dungeon, the new roguelike game developed by Red Hook Studios. Of the many roguelike and dungeon crawler games released in recent times, no other title comes so close to capturing what it means to be an adventurer, highlighting both the good and bad aspects of the "profession".

In Darkest Dungeon, players will be exploring an inherited gothic mansion and its surroundings. Everything is in ruins and infested with all kinds of monsters coming out of mysterious gateways, however, and the only way to truly claim this land is by getting rid of all of them.

This unsettling premise, presented with a nice cinematic, sets the tone for the whole adventure; this tone is further enhanced by the game's superb presentation. Darkest Dungeon sports a beautiful comic book art style which gives everything, from dungeons to characters to monsters, a very distinct look and personality. The game's grim atmosphere, which is reminiscent of H.P. Lovecraft's works, is made even better by the narration, used to highlight pretty much everything that players experience during the game. Getting crushed by monsters in a dungeon? Expect a dramatic remark. Is exploration going well? Expect the narrator to share his optimism in a rather bombastic fashion.

The excellent presentation is only one of the many likable features of Darkest Dungeon. The gameplay experience, which mixes roguelike and RPG features, is so well crafted that even those who aren't exactly fans of this genre will be able to enjoy the game fully.

Following a brief yet informative tutorial segment, players reach the Hamlet, which is the main base of operations. The Hamlet features a lot of different facilities that allow players to recruit additional heroes, enhance and learn skills, upgrade equipment, purchase special Trinkets and more. In the beginning, all facilities offer only the most basic services, but it's possible to expand them by using heirlooms, which are obtained by exploring dungeons and completing quests. 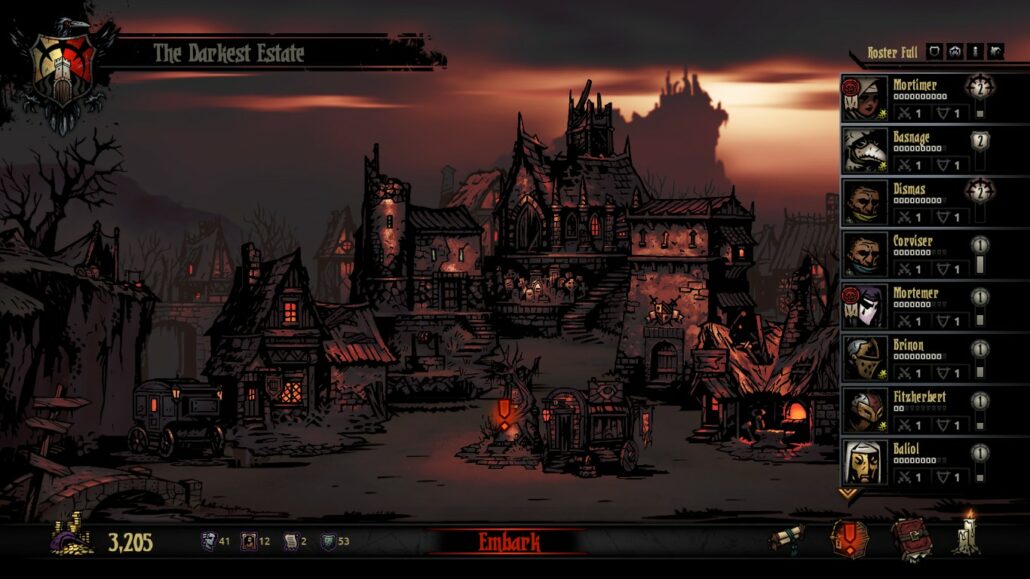 Being a roguelike at heart, Darkest Dungeon's main focus is dungeon crawling. Once players decide on a team composition and purchase the required resources from the preparation menu, they can embark on a variety of quests set in different locations, each one having its own set of traps and enemy types. Preparing well before heading out is of extreme importance, as lacking the necessary resources can make life much, much harder. Choosing the right heroes is fundamental as well, as each of the 14 hero types come with skills that are more effective against certain enemies.

Dungeons in Darkest Dungeon are randomly generated, made up of interconnected rooms which may include special points of interest called Curios, treasure chests and enemies. Actual exploration is done in a side-scrolling fashion, with players moving to the right to reach the next room, or to the left to retreat to the previous one. While moving through connecting corridors, players can check out more Curios for loot and other perks, adjust party formation, eat food to replenish health, use torches to light up the environment and disarm traps. More often than not, players will have to fight a variety of monsters in a turn based battle system, using different offensive skills to deal damage, decrease stats and cause a variety of status ailments and support skills to heal, buff and more. Both types of skills can be used depending on the formation of both heroes and enemies. Some heroes are good in multiple positions depending on the loadout, something that gives players more options when assembling their parties. 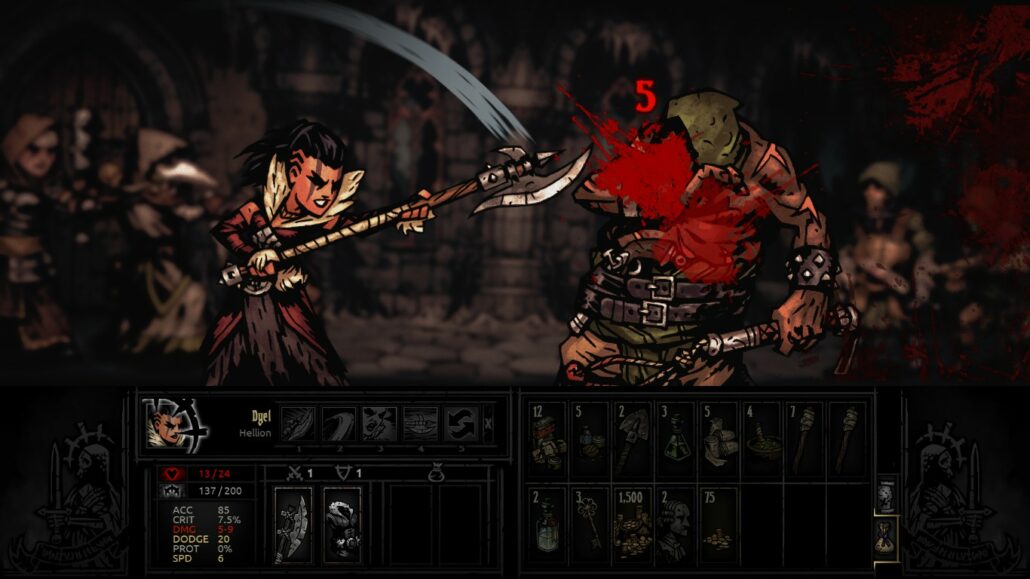 Exploring dungeons and fighting strange creatures is a rather stressful feat, and Darkest Dungeon does its best to remind players of how the level of stress can make the difference between success and failure. During exploration and battles, heroes will accumulate Stress points, which can only be slightly relieved in dungeons. Once Stress points go beyond 100, heroes start suffering from a variety of afflictions which severely alter their battle performance. At other times, however, heroes react to high levels of stress with heroism, receiving some very useful performance boosts. Still, no matter what players do, stress levels will eventually become very high and heroes will require some well deserved respite.

To relieve heroes' stress and remove crippling afflictions, players need to use facilities like the Tavern and the Abbey located in the Hamlet. Heroes relieving stress will become unavailable for some time, forcing players to make some hard choices. These services also require money, so resource management is key even outside dungeons. Stress mechanics might seem like a needless complication at first glance, but it actually expands the experience considerably, often forcing players to adapt to the situation and experiment with heroes, loadouts and formations. 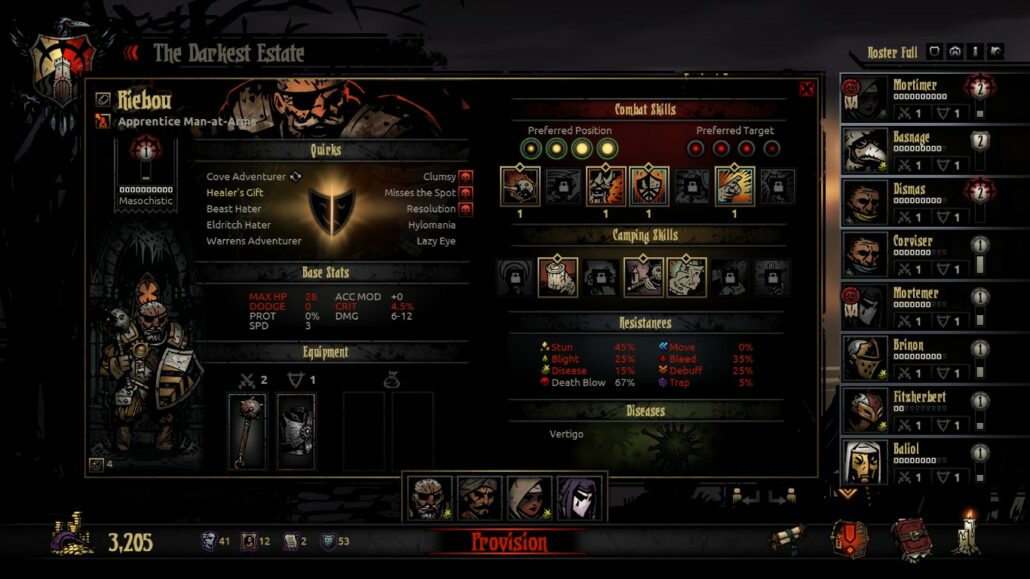 Being a roguelike game first and foremost, Darkest Dungeon does come with the typical randomness of the genre, such as procedurally generated dungeons and unfair situations, but it's significantly less impactful than in other games. If something goes wrong, it's mostly due to the player having made some wrong decisions. Things do get frustrating at times, but thankfully the team implemented some features that can make the experience more enjoyable and a little less frustrating for those who aren't exactly roguelike experts, like very informative tutorials and the ability to streamline the experience by turning off some advanced mechanics like monster leaving corpses after defeat, stress damage and more. Players can also access a help menu at any time by pressing the H key, so the team has truly given players all the tools they need to succeed in their quest.

Darkest Dungeon is without a doubt one of the more interesting roguelike games released in recent times thanks to its superb presentation and engaging gameplay features. Being a roguelike at its core, Darkest Dungeon won't change the opinion of those who can't stand similar games, even with the randomness of the genre not being as troublesome as in other games. Randomly generated dungeons might get tiring after a while, but there's no denying that Darkest Dungeon does its best to keep players coming back for more.

Darkest Dungeon is a roguelike that even those who don't like the genre might enjoy, thanks to a challenging yet fair experience, a charmingly dark atmosphere and a superb presentation. Some procedurally generated elements may not sit well with some, but Darkest Dungeon is so well crafted that it's easy to look past them.