I have a certain soft-spot for sub-par shooters. When making a game in a small franchise, there's room to experiment and take more risks than the titans of the FPS genre, Call of Duty and Battlefield. That's why when I started playing Call of Juarez: Gunslinger, it put a smile on my face. This goofy cowboy shoot-em-up doesn't take itself too seriously and wants to just let the player loose on shooting pesky varmints in the wild west. But my initial impression didn't take too long to be soured, and Call of Juarez quickly became more frustrating than fun.

Call of Juarez: Gunslinger is a western FPS which lives and dies on its fun and imaginative presentation. The story is framed through an older cowboy reminiscing on his days gunslinging with the world's most dangerous rootin' tootin' cowboys, and his stories are certainly grandiose, to the point of being unbelievable. You play out these tales, slaying hundreds of cowboys and villains in some fairly action-packed stages. As you play, hear the narration of the story being told, and sometimes the scenarios in the stages will adapt to the story being told, and the corrections made. It gives a nice level of context to the world and stages, and the situations that arise from this framing are entertaining and fairly unique in the genre.

The story's main problem is a litany of generic cowboy names that it quickly becomes difficult to keep up with. Who is each of the villains? Why, exactly, do we kill each of these bosses? Even with the story being narrated it's all difficult to keep track of in the heat of battle, and it is very difficult to become engaged in the narrative itself. You keep playing for the shooting and action, the story is just something that happens around that. A minor shame, given the interesting narrative devices in place here.

On Nintendo Switch gunslinging is made slightly easier, depending on your preference, with gyro aiming controls available when aiming with your weapon, and it can help, even though it's still not quite as good as the likes of Splatoon 2 of Breath of the Wild's motion control aiming. This is a nice platform-specific addition, which eases the fact that the aiming controls are not the best. The fact is, without the incredibly generous auto-aim that the game has, aiming at enemies becomes a nightmare. But then, the auto-aim feels almost like cheating, as I was using it to outright help locate enemies for me, like an aimbot hack. Without the auto-aim, it is simply not a good experience, neither to shoot nor just find your way around, thanks to several other issues.

The visual style is not bad, it's a dark cel-shaded style, and works well with the setting and tone. The problem is that the image quality is not always fantastic. These issues might be specific to the Nintendo Switch version, and will likely not be found on the PC version in higher resolutions, but the image quality often felt messy. Brown environments perfectly masked brown enemies, with shades of brown coating the floors, the wooden interiors of buildings, the trees, everything. It needs more saturation, and the image quality problems only worsen when you're in a dense environment. For example, one early boss battle sees you fight it out in an arena filled with dozens of piles of wooden pallets to use as cover for both you and the boss. This area looks disgusting, with thick lines of aliasing stair-stepping their way across every edge, making the image quality just ugly to look at, as if I'd been transported back to poorly optimized PS3 games. I mean, this was originally a PS3 and 360 game, but frankly, I didn't want to have that precise experience. Not to mention, the framerate isn't always stable.

It's a shame because moving through levels is usually fun. Shooting down enemies quickly, moving on to the next, it's a classic bullet ballad which you've seen a dozen times over, and when it works, it's just fun to experience. But then suddenly you'll hit a wall of frustration. An awkward, scripted fight, enemies you just can't see among the debris, a frustrating boss with a mounted gun… These frustrating, un-fun moments just come along too frequently, and when paired with the sub-par gunplay, it just ruins all of the original and interesting points the game has.

Call of Juarez: Gunslinger needed more than a simple port, it needed a full remaster to be worth playing in the modern era. When compared to other shooters available this year on the Nintendo Switch alone, it is borderline impossible to justify purchasing. As much as I liked the game initially, my final thoughts have been soured by the frustrations I've had along the way. Call of Juarez: Gunslinger just isn't worth your time or money, even when considering the game's inclusion of an arcade mode and replayable levels. 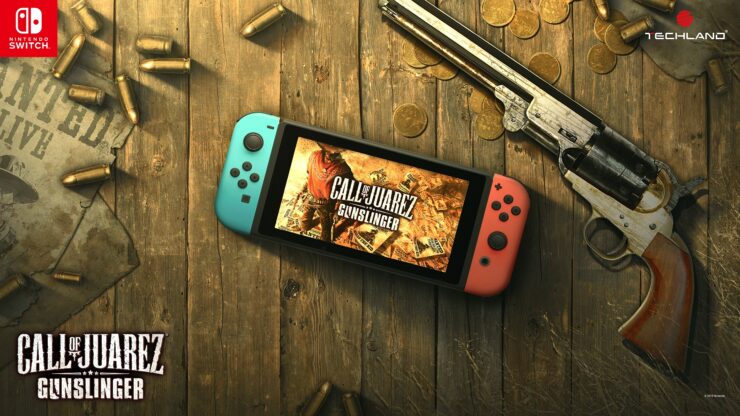 Call of Juarez: Gunslinger is a six year old game that is showing signs of its age, and has not been brought in the modern generation gracefully. The visuals are often ugly, and the gunplay is below the standard seen on Nintendo Switch or anywhere else. For your money, you can play a much better game on this console. I could only possibly recommend this game for people nostalgic for the game, but even then it's likely to ruin those rose-tinted memories.