Who knew that nature could be so delicious? Exclusive to the island of Snaktooth are a species of unique critters that are just as tasty as they look. These Bugsnax are half-bug, half-snack, and all addictive. Once you pop your first Bugsnax in your mouth, you just can't stop. We recently cracked the case of Snaktooth Island wide open and explored the secrets of just what these Bugsnax actually are. 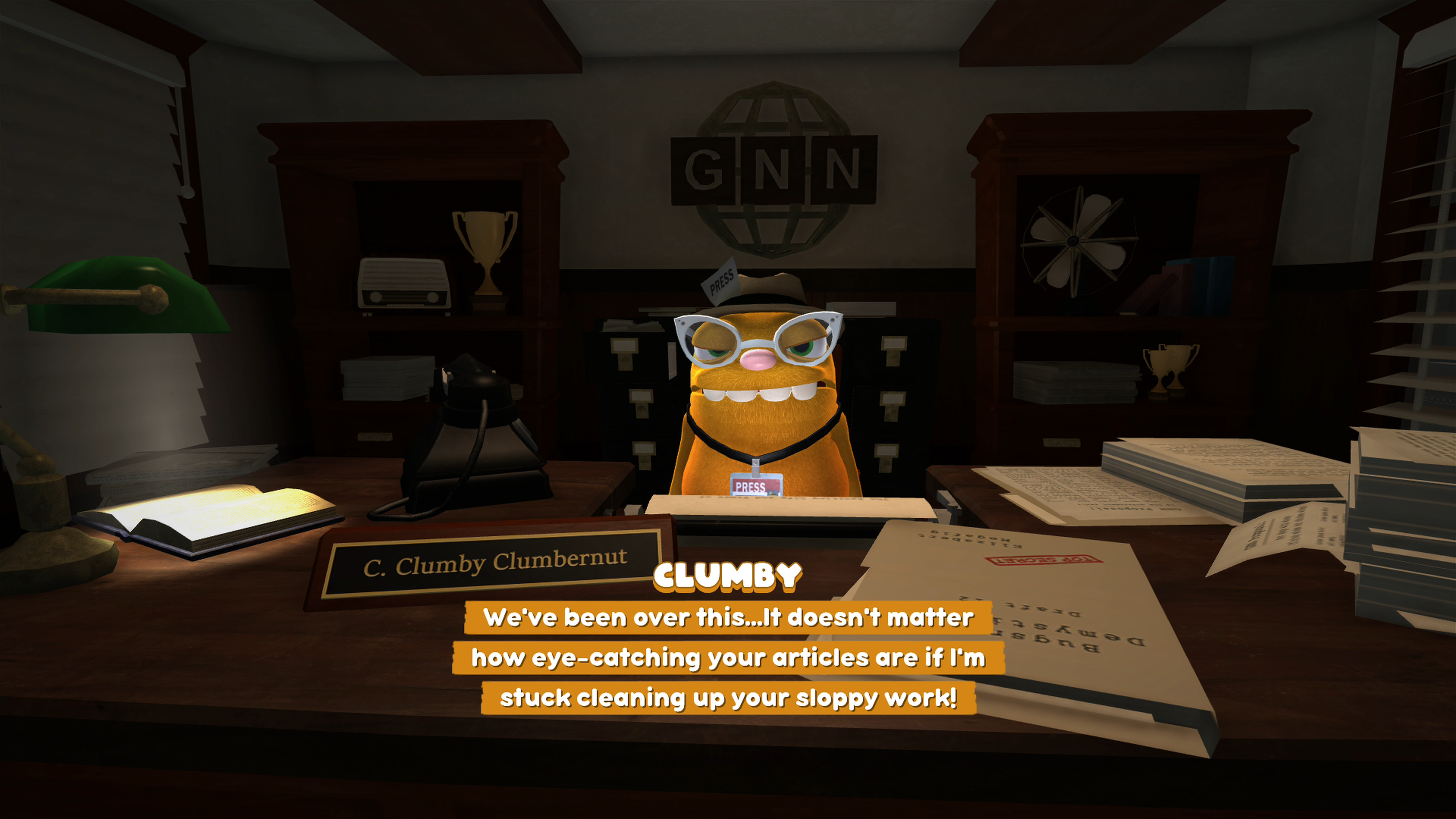 As a reporter out for the next big scoop, the player catches a whiff of a story about a missing journalist by the name of Elizabert Megafig, last seen cataloging the mysterious creatures of Snaktooth Island. With just a notepad and a hunger for the truth, it's up to you to interview the Wumpus locals and discover just what happened to Elizabert on this island of mysterious delights.

While you're not given any tools to catalog or capture these Bugsnax from the beginning, the locals of Snaktooth Island are all too willing to share their devices with you in exchange for a Bugsnax or two in payment. Your very first tool is a camera that will allow you to snap some candid shots of the local fauna and add them to your Bugapedia compendium. As the adventure continues, you'll be given other handy tools like a springboard to launch objects high into the air, trip wires to stun the Bugsnax, a slingshot that can fire off the Bugsnax favorite foods of ranch or other sauces, and more. 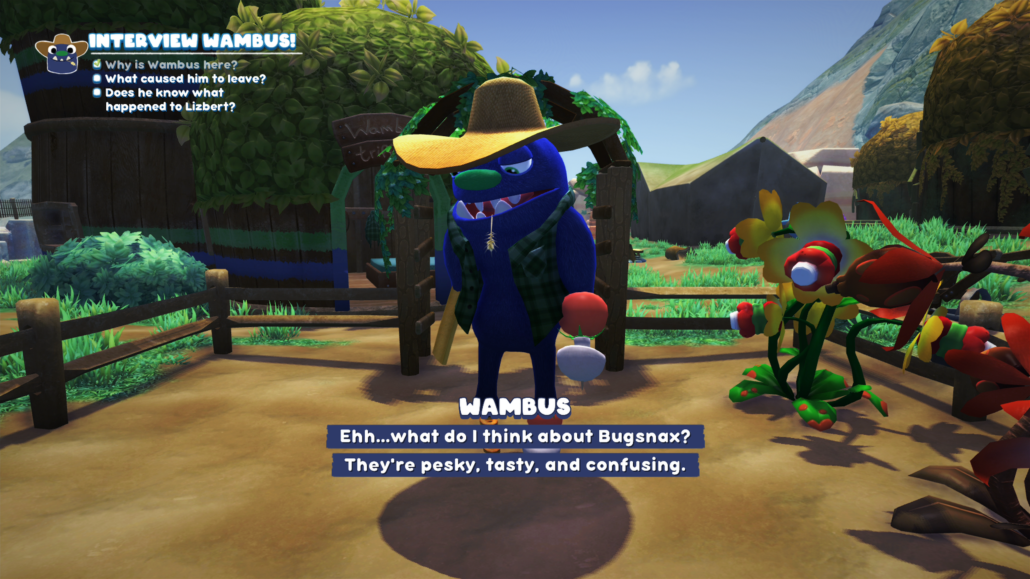 Trying to catch these Bugsnax is often a puzzle unto themselves. With your handy little scope, when you peer out and tag a wild Bugsnax, you're given a quick snapshot of the information you need in order to harvest and collect them. From the migration patterns they take (which is essentially what loop do they do walking or flying about), what types of sauces they enjoy eating, and if they love or despise certain other Bugsnax in their biome.

For most Bugsnax, you'll have all of the tools you need to capture them the first time you encounter one in the wild. Shortly after you are tasked with trapping and collecting a flying Bugsnax, you're given a trap wire that can stun wild Bugsnax at a single touch. This is immensely helpful, as it will knock flying Bugsnax from the air so you can finally collect the forbidden fruits of the skies. That is, unless they're excessively spicy. 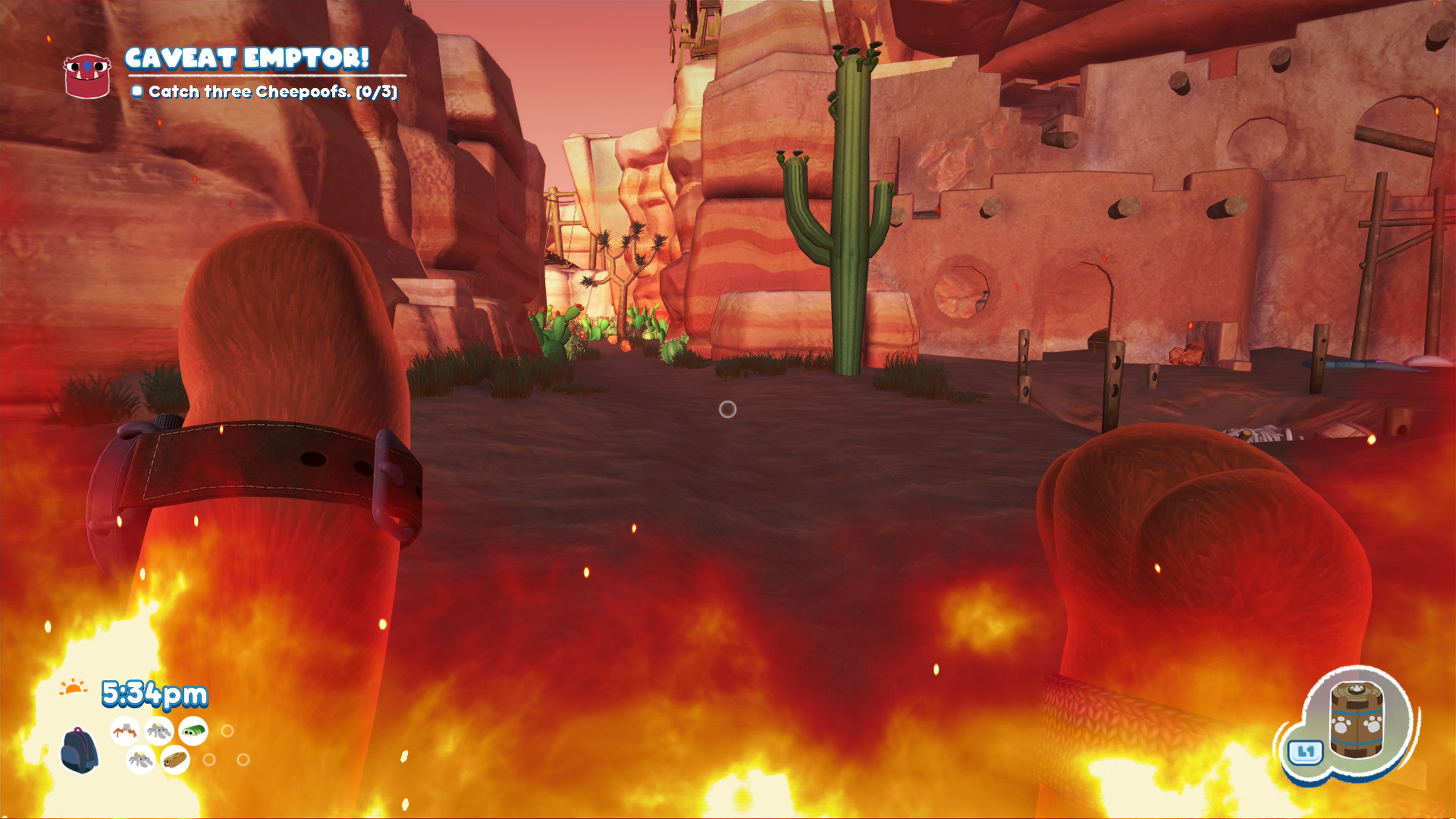 The Bugsnax that harbor extreme body temperatures, that is to say, freezing or flaming Bugsnax, are the trickiest to catch. Even if they're stunned and ready to catch in your net, these Bugsnax will burn you one way or another, ruining your traps and nets at the same time. Merely bumping into a hulking Scoopy Banoopy is enough to freeze the player in place, forcing you to mash buttons to break free.. only to get frozen again if you can't get away in time. In order to capture these elusive Bugsnax, you'll have to first hit them with the opposite element to balance them out like some kinda of Bugsnaxy pH meter. If a ghost pepper scorpion is on fire, you'll need to splash it with some water or somehow lead it to ice to extinguish those flames. Sorry, but nacho cheese and ketchup won't do much for those infernal flames.

These elemental interactions are among some of the trickiest puzzles to solve in Bugsnax. While every single Bugsnax has their own tricks to capture, it's the handful of elemental 'snax that will prove to be the biggest challenge. Unfortunately, even if you can see the solution in your mind's eye, executing the plan with the tools on hand can be a struggle at times. Given how destructive the fiery Bugsnax can be to both your body and your capture tools, extinguishing those flames is the first priority. However, unless you can somehow lead them to walk into a body of water or get splashed by a more liquidy Bugsnax, you aren't going to be able to brave the flames to catch them in your trap. Of the hours I spent filling out my Snaxdex, I would have to say a good majority of the time was spent trying to crack the puzzle of how to capture these elemental Bugsnax. 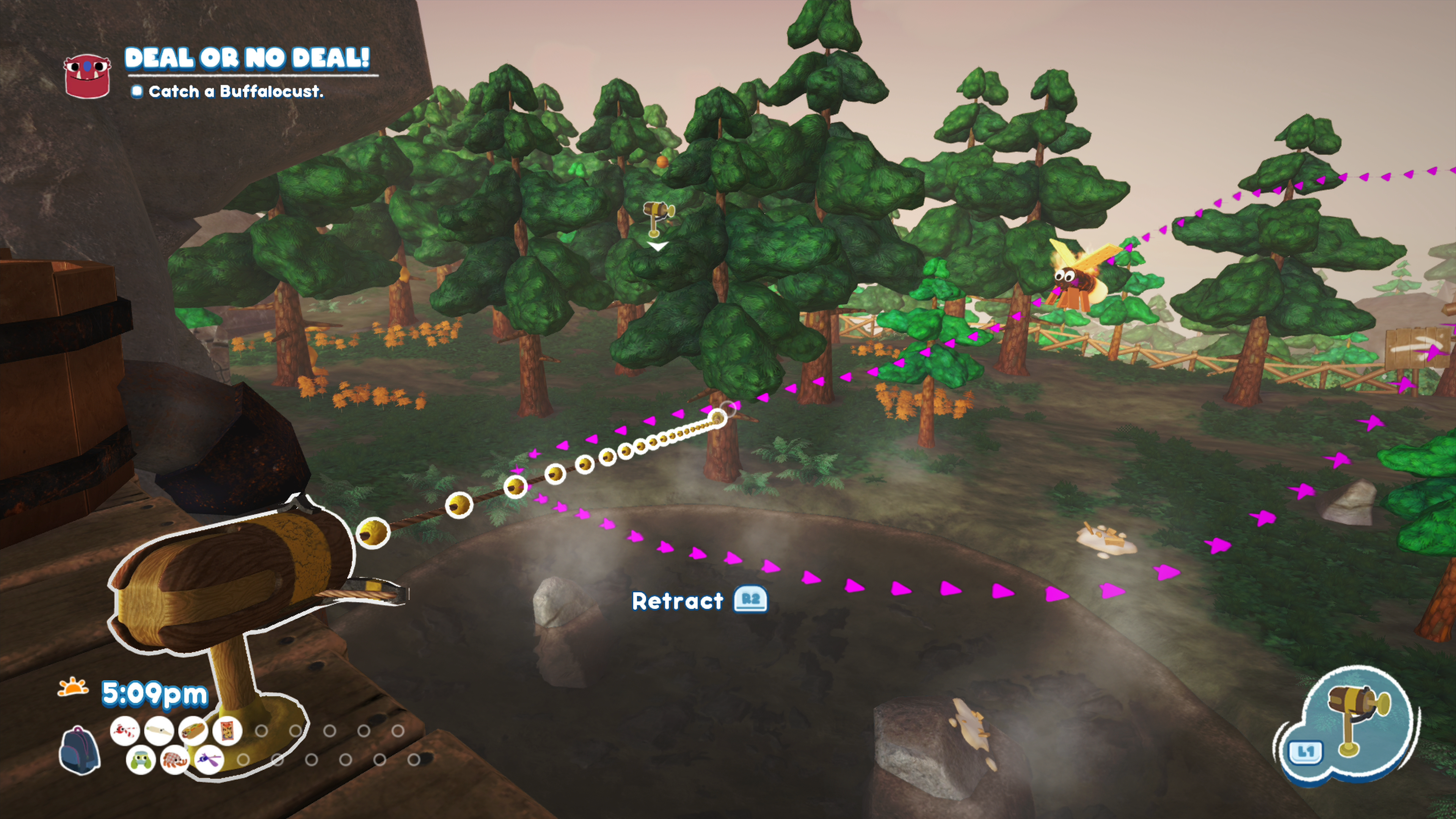 The physics of Snaktooth Island doesn't do much to lend to the thrill of the hunt for elusive Bugsnax. Instead, you're often going to be cursing out the name of the benevolent Snoopy Banoopy as your tools don't work as intended. Bugsnax capture traps fall over, trip wires just randomly fall apart as you try to string them between two points, running out of the right kind of special sauce for your slingshot, et cetera. The last one can be chalked up to poor planning but the other tools falling apart at a crucial moment can be quite frustrating indeed, especially if you're tracking a particular variant of Bugsnax that takes forever to complete a loop around its territory. Thankfully the only thing you're losing out on is time as every tool in your collection automatically resupplies after a short wait.

Time itself governs which Bugsnax the Wumpus' be able to dine on in Snaktooth Island. Many of the tasty critters are only available at limited times of the day, some even only coming out in the right weather conditions. If you're ever out hunting and can't find what you're looking for, the blank canvass in your compendium will over off some tasty morsels of information on what conditions they'll appear in. Every zone features a bed so you can catch a quick break and wait until just the right time of day to brandish your Bugsnax net. 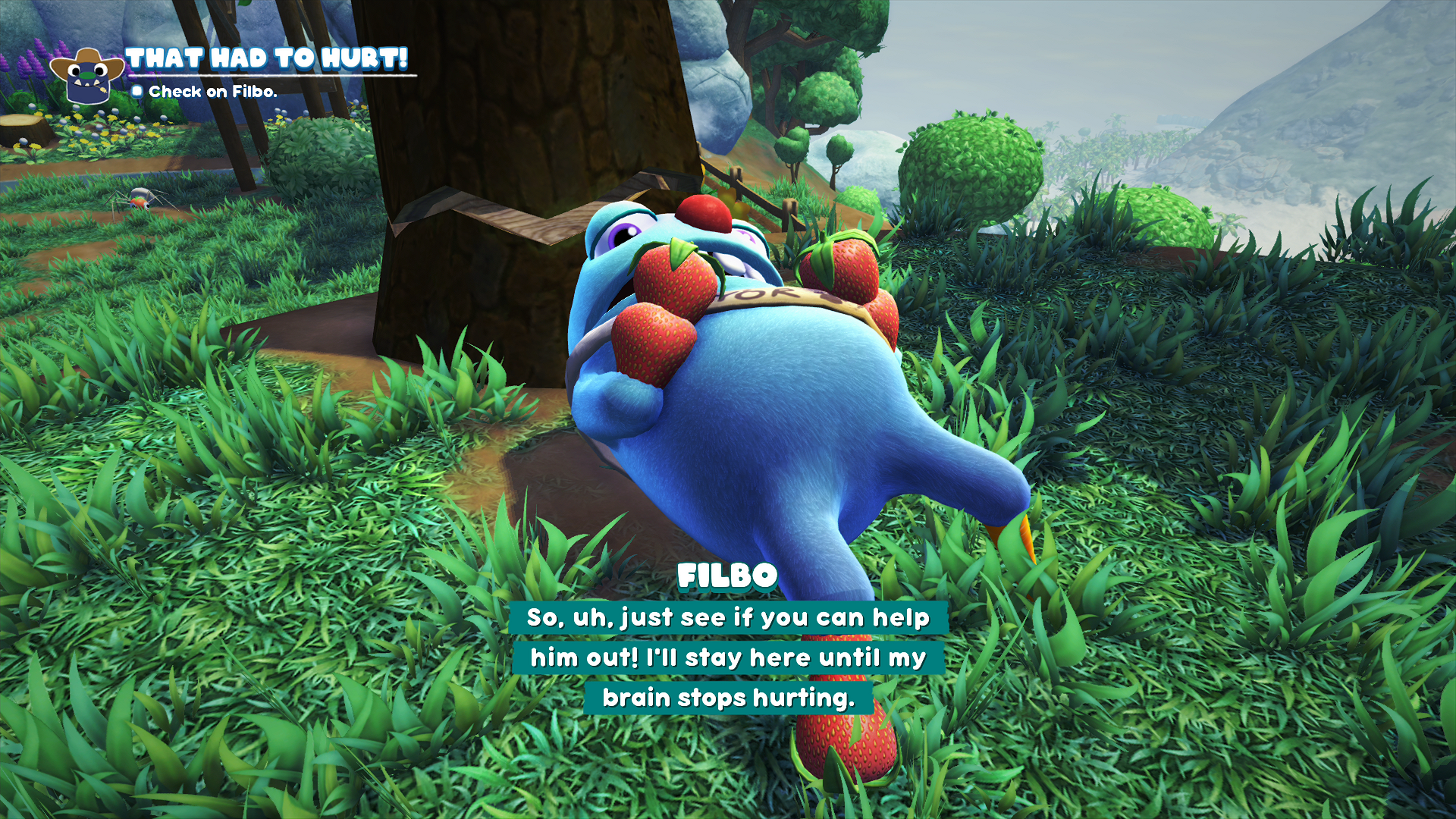 One (un)fortunate side effect of consuming Bugsnax if you're a Wumpus is a strange transformation of your appendages into whatever creature you just consumed. As the old saying goes, 'you are what you eat'. For these Wumpus, they couldn't be happier to have their hands transformed into hot dogs or giant pretzels and some will even give the player requests for a specific type of body transformation. With a smile on their face and a hunger that can only be satisfied with Bugsnax, who are you to say no?

While Bugsnax will be available as a launch title on the PlayStation 5 (and free for PlayStation Plus users), I've only played the PlayStation 4 version for the review. If it wasn't going to be free on one console, I would have to recommend Bugsnax primarily to those that enjoy a good bit of puzzle solving when it comes to the various interactions of the Bugsnax and figuring out the tricks to getting them into your net. The physics of Snaktooth Island will be your biggest opponent and players may find themselves frustrated with an empty net and a severe lack of Bugsnax in their traps.

The hunt for elusive Bugsnax is an interesting tale, requiring the patience of a fisherman and the experience of a Pokemon Snap master. This is one delicious adventure, though it might be an acquired taste for some.