Beyond Blue is a gentle, peaceful exploration of the Pacific ocean, filled with beautiful reefs, terrifying abuses, and human interaction. It doesn’t carry the same mysticism of other watery games like Abzu or In Other Waters. It's more grounded, the storyline is more introspective. Some might call it boring, but it does exactly what it set out to do.

You play as Mirai, an oceanic scientist in the Pacific ocean who is live streaming her dives as she works to understand more of the life below the waves. She has a particular interest in sperm whales, and a lot of her expeditions will have you encountering and getting to know the pod she’s been tracking. But there is more than just whales here. You’ll also have the chance to get up close and personal with all manner of sea life, from sea turtles to sharks.

The care and attention E-Line Media has paid the creatures you’ll come across is immediately evident. Each creature looks true to life in every detail, from the way it moves to the noises it makes and just the texture of her skin. Early on in the game, you’ll be able to zoom scan creatures, getting even closer to the incredible wildlife and the detail continues to amaze.

Likewise, the views in Beyond Blue are just breath-taking. While obviously the coral reefs are fantastic, Beyond Blue makes sure that all aspects of the ocean are awe-inspiring. The great abyss of the open ocean opens up in such deep blues, really giving you the sense that it is an endless void. While exploring the Twilight Zone, where sunlight barely reaches, has this ever so slightly unnerving feel.

You are never in any danger in Beyond Blue, though. You don’t need to worry about your oxygen levels or getting spotted by a wayward shark. Nothing can hurt you, not even the octopus that likes to surprise you in some of the caves you come across, so you’re free to explore as much of this level as you’d like without the fear of wandering into a dangerous zone.

Your main task in Beyond Blue is to scan the sealife you come across. Each level revolves around a series of buoys you’ll use to highlight the main objectives, normally the sperm whales or other notably large and noisy creatures. But moving between these objectives you’re free to scan every whale, crab, shark, and jellyfish you come across. It's not a particularly tasking game, and some of the distances between the objectives can be a little too far, especially in the open ocean levels where even the character references how it feels like you’re not moving.

When you’re not swimming, you’ll be making phone calls in your own personal and enviously cozy submergible. This is where most of the drama takes place, as you speak with your younger sister about her life at university and her responsibility caring for your grandmother, or manage the relationship of the two other researching helping in this mission. These are obviously not the main focus of the game, but the dialogue is surprisingly well-acted, and the personal issues explored by the game, particularly with the sister, are genuinely touching.

Also while in the submergible, you can explore the game's video library. If you played E-Line Media’s Never Alone, you’ll know that they have a talent for translating their research into a series of short, informative videos. In Beyond Blue these videos look at the actual research and conservation efforts in the Pacific, as well as the people and technology behind it. Each video is around two minutes long and offers a glimpse of insight into the life of people that work with the sea life you’ll marvel at through the game. They are entirely optional in the game but should not be missed, in my opinion. Also in the sub is an extensive music library that is well worth spending a few minutes going through, as the soundtrack matches the tone of the game so much that I think it would be great if you could bring it with you when you go diving.

Beyond Blue was developed, inspired and made in partnership with BBC Studios and Blue Planet, and you can feel that same love of the ocean that the documentary series conveys. There are no action sequences or conspiracies to uncover here. You won’t be exploring ancient ruins, although you might spot human waste drifting in the deepest depths of the ocean. Beyond Blue isn’t an exciting game, and it's almost a compliment and criticism at once to say that it feels like an interactive documentary. But in the end, after each session with Beyond Blue, I would open up the iPlayer and watch an episode of Blue Planet. This game makes you fall in love with the ocean, from its creatures to its landscapes, and I don’t think it wanted to do anything else. 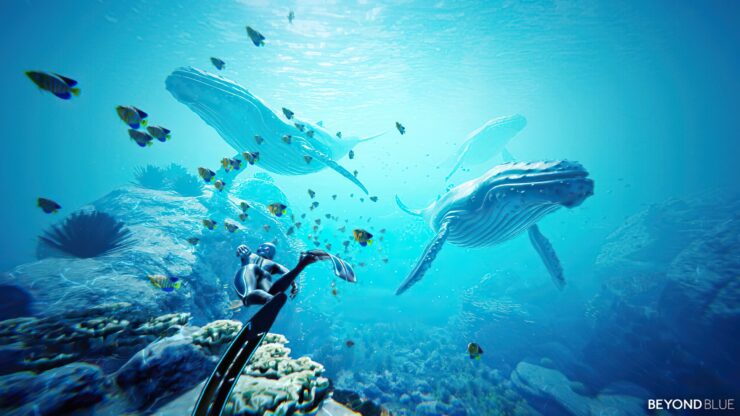 Beyond Blue does exactly what it set out to do. It isn't trying to compete with action oriented games but instead focuses on a part of our world so often overlooked to create an incredible sense of place, beauty, and conservation out of the people playing it.

Witcher, Cyberpunk Sequels to be Tested on All Platforms from Day 1, CDPR Optimizing UE5