We requested an X62 AIO 280mm cooler from NZXT for our X299 test bench and combined with our H440 case the results were so good that I decided to do an RGB showcase and mini review of the Kraken X62 - which is quite possibly the best looking AIO in existence. The Kraken X62 and HUE+ AER RGB 140 kit were provided by the manufacturer for review & testing purposes.

Liquid cooling is quickly transitioning from enthusiast niche to the mainstream niche with the advent of high core count processors that generate an incredible amount of heat (Anyone who has tried to overclock a Skylake-X processor will know what I am talking about). If this trend continues then AIO cooling will quickly become the cooling type of choice for HEDT builds. In fact, both AMD and Intel officially recommend using their Skylake-X and Threadripper HEDT parts with an AIO loop.

NZXT has a long history of making incredibly classy looking products with killer aesthetics and the Kraken X62 is no different. In fact with the X42, X52 and X62, the company has rolled out what can easily be categorized as the single most iconic upgrade in AIO RGB aesthetics in a very long time. I am talking of course, about the infinity mirror design. The infinity mirror illusion has been used in many commercial products but none have come as close to perfection as the NZXT's Kraken X/2 series.

Boasting a radiator size of 280mm that is 30mm deep, not only is this the prettiest looking AIO around, but also one of the most powerful. You would be hard pressed to top this in this class and would have to shift to 360mm radiators to get better performance than the X62 - which have a vastly lower compatibility value then their smaller cousins. Pump life span is another issue that make people usually hesitant from buying an AIO but NZXT provides a 6-year hassle free warranty for the pump to alleviate any and all concerns buyers might have.

The packaging is very well done unlike some of the liquid coolers we have seen ( I am looking at you, Arctic) and minimizes impact damage to the AIO greatly. The AIO comes with thermal paste pre-applied and a cover on the copper plate to protect the head Before we go any further, lets get the specifications and packaging out of the way:

We were also sent the HUE+ kit with 2x 140mm AER RGB fans and while they were not high static pressure fans, we did install them in our white NZXT H440 case that we had on hand for an tremendous results

2. Installation in the NZXT H440 (New) and overall aesthetic

The H440 already has a critically acclaimed, under stated and minimalist aesthetic that resonates very well with high powered builds.The HUE+ AER RGB Kit and Kraken X62 help take that to the next level for an absolutely killer look that will sit will with both gamers and professionals alike. It is understated, classy, yet very much RGB.

Since the NZXT H440 case is one of the ones supported completely by Kraken X62 we were a little surprised to find that the enormous 280mm cooler actually has some compatibility issues with the H440 when mounting it on top. This is something that will vary by motherboard type (we were using the AsRock Taichi) since the problem is the AER P fans partially covering the CPU conenctor and the connector has to be bent slightly for a perfect fit to occur.

Apart from that, the installation was quick and painless and daisy chaining the HUE+ hub back into the PWM hub of the H440 took only a few minutes. We did have to give up a USB 2.0 header since the HUE+ utilizes one leaving the USB 2.0 ports on the top of the case inactive.

I for one love the overall aesthetic of the NZXT combo and in my opinion this is one of the most classiest RGB builds you can get without going over the top. Now interestingly, the H440 is a quiet case so it would be interesting to see what impact on thermal performance the acoustic isolation pads and the sealed design has on the cooler. We will be testing this later on.

Now comes the part I am sure we have all been waiting for. The RGB show case of the complete build. One of the problems I have seen with RGB products in the PC peripheral space is that the LED lightning is not accurate. The best way to tell is to set the toggle at white and see the tint. You will usually either see a green or blue tint in most cases. In my current RGB build, I am using an AsRock Tiachi X299 RGB motherboard, ASUS GTX 1070, Steel Series Mouse and a Corsair P95 Keyboard and none of them, I repeat none, come close to the color accuracy of the Kraken X62.

While most other products show tints of various kind, the NZXT Kraken X62 manages to get away with an almost perfect white color, showcasing just how accurate the cooler really is. Without any further ado, here are just some of the snapshots of what the Kraken X62 can do.

The CAM+ software is what will control all of the RGB effects as well as the performance controls of the Kraken. Unfortunately it tends to glitch out a lot and is slightly cumbersome to use. Some of the RGB effects included also can be glitchy showing erratic and slow movement but most will work just fine. As far the flexibility of RGB controls go, that is simply impeccable and you can tweak just about all aspects from the Ring light to the NZXT logo on the same.

The HUE+ controller also features a sleek white light that emphasizes on the design philosophy of NZXT as a company. The bar is not RGB and is a simple white LED. If you are using the NZXT H440 case then an added bonus is the backlit NZXT logo and the PSU shroud, which will give you that professional looking modded PC look right out of the box.

Alright, now that we are done with the fun-stuff lets get down to business. While looks can play a big part in the decision making process of a consumer, and the Kraken X62 absolutely kills at that, can it pack a punch in the cooling department as well? Lets find out.

Since we are using the Kraken X62 in a quiet case, our testing methodology will consist of a total of 4 tests. 2 with the case seals (and acoustic dampers) intact and 2 with the Kraken mode in silent and performance mode each. We will compare that to cooling performance offered by other AIOs (the Arctic Liquid Freezer 240) as well as the Noctua U14s which is an air fan. Ambient temperature at the time of testing was a pleasant 22 Celsius.

For the purposes of our max load, we will be using an artificial burner: LinX 0.6.5 which will give us a worst case scenario for heat. For the conventional load, we will be doing some gaming and some rendering tasks and taking an average of the temperature fluctuations. Here are the results: 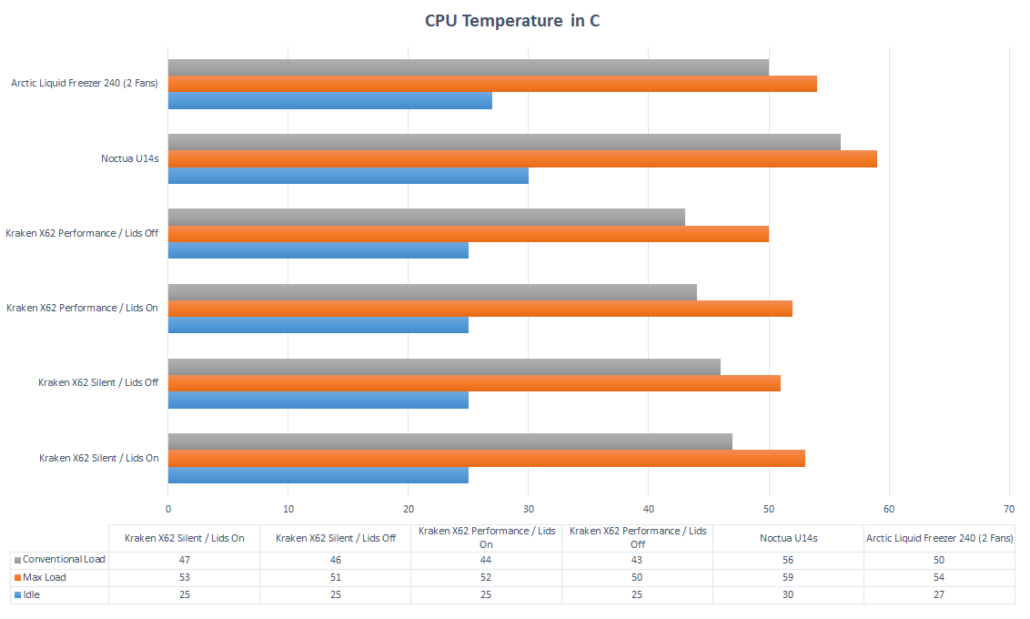 As you can see the silent and performance modes, as well as taking the lid off and on makes a huge difference to the temperatures. One thing to keep in mind is that the chasis fans are connected to the motherboard as well and when a load is applied, they spin up to full power as well, increasing the pressure inside of the case and increasing the total differential of air being moved across the radiator.

We found out that the best performance can be found by removing the top lid and using the performance mode, which has a surprisingly bearable noise level. Unlike the older series of Kraken which had a high pitched whine when being used at max performance, the X62 has a very wholesome and muted hum which is not even slightly distracting, unlike its predecessor. Even when using the performance mode we found that the noise levels stay almost completley silent unless we apply a rendering load or use an artificial burner.

During gaming sessions, the fans and the pump do spin up but you will not even notice any sound unless you are sitting in a room with almost nothing else going on . I did not have a decibel meter at hand but it is easily one of the most silent AIOs (and case!) we have ever tested. 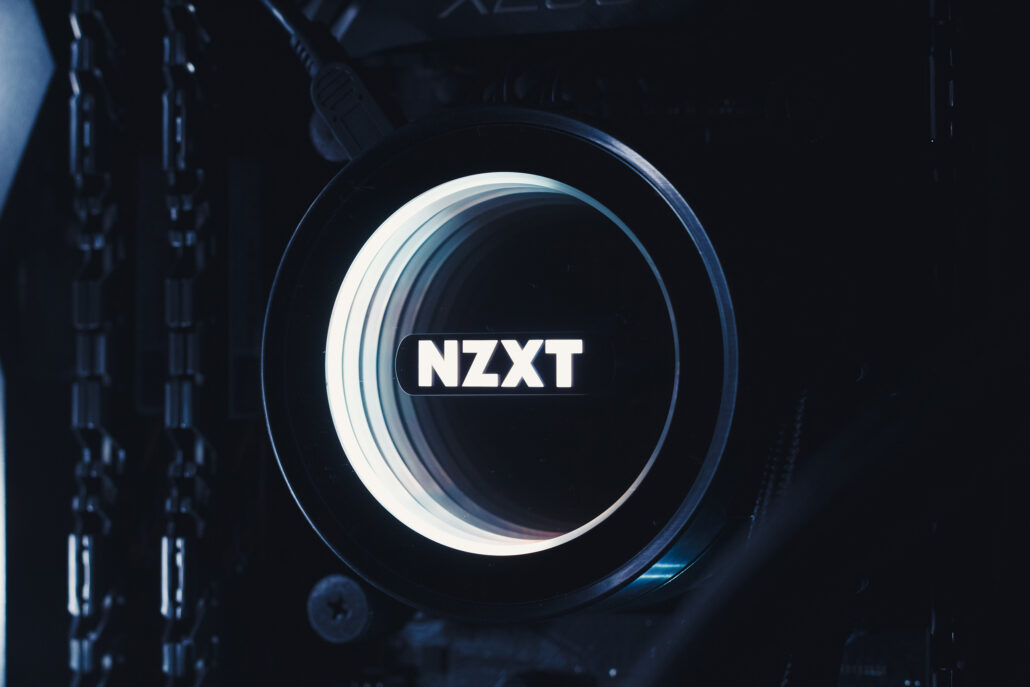 The NZXT Kraken X62 is slightly more expensive then its competitors, but for that premium you get an extremely unique aesthetic that no other vendor can provide ( I am sure the infinity mirror design is patented). It also has best-in-class cooling performance as far as 280mm rads go and the Kraken X52 and X62 easily get our Editor's Choice award for RGB builds.

You can purchase the coolers from Amazon or Newegg, or can even get an entire RGB PC built using our PC Builder tool and simply selecting the RGB option. To fully maximize the impact however, you will probably need to opt for the HUE+ controller which will allow you to go full-on RGB using the AER RGB fans.

As far as the compatibility glitch we ran into (CPU Power Connector getting in the way of the AER P fan) at this point we are not sure, whether AsRock or NZXT is to blame for that. Increased headroom in a newer version of the H440 will of course alleviate the issue regardless and so will a power connector which does not have a clip. All in all, the X62 is a very solid offering in terms of cooling performance for both Intel and AMD HEDT platforms and probably the best offering in terms of looks. 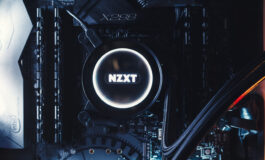 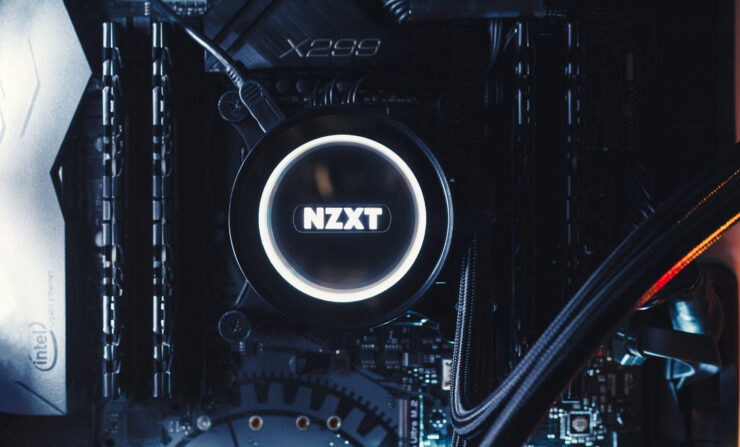