For years we had to settle with watered down versions of console games on handheld devices, but with the Nintendo Switch, it looks as if those days are finally over. Now we’ve got portable versions of some of the best games that released this generation, and it looks like we are about to receive some of the best games of the last generation. It’s unlikely you missed Bayonetta 1 considering it launched on every major platform in the past nine years. Bayonetta 2 on the other hand only released on the Wii U, which means the average person reading this almost certainly didn’t get a chance to play it. Now that the Bayonetta 2 is about to come out on the Nintendo Switch (alongside the first game), you’ll finally get to see what all of the fuss is about.

Bayonetta’s story is utter madness, even trying to explain it will make you sound like a crazy person. All you really need to know is that the absurdity of the story takes you through four dimensions: Paradiso (Heaven), Inferno (Hell), Purgatorio (the space between the dimensions where angels, demons and humans can interact) and the human world. Did I forget to mention Bayonetta's hair not only doubles as her suit, she also uses it to summon Infernal Demons from Hell. That's also a thing. Throughout the games you'll get to battle floating cherub angels and demons, oh, and at one point you fight God in space. Yes, that God, the creator of everyone and everything.

One of the things that makes the Bayonetta series so great is that it does a great job of welcoming new players without upsetting action game veterans. Don’t get me wrong, both Bayonetta games are difficult, but they are difficult in a way where each death feels like you messed up as opposed to the game being unfair. The core mechanic of Bayonetta that all players are forced to use is Witch Time. This mechanic is clever as it rewards players for doing something they ought to be doing: avoiding attacks. By dodging attacks at the correct time, Bayonetta slows down the passage of time, allowing her to strike several times in a matter of seconds. Witch Time is used both in and out of combat. The most obvious use of this mechanic is to kill enemies, however, it’s also used in a number of puzzles.

As you progress throughout Bayonetta 1 & 2, you will come across LPs (record pieces) that can be transformed into weapons by a character named Rodin. While you’ve probably seen Bayonetta with her classic handguns, you may not know Bayonetta also has access to swords, bows and even ice skates. Unlike many action games, Bayonetta has the ability to equip weapons to both her hands and feet, hence the ice skates. Some of the weapons have alternate forms specifically made to fit Bayonetta’s feet, though most of these must be purchased from Rodin in exchange for Halos (the in-game currency).

There are also accessories that need to be purchased from Rodin that can change your playstyle dramatically. Want to make the game slightly more forgiving? Purchase Selene’s Light, that way Bayonetta will instantly activate Witch Time when struck by an enemy. If you want a challenge, why not equip the Gaze of Despair that automatically enrages enemies once taunted? This accessory makes each enemy even more difficult to deal with, rewarding the player with increased combo points. As you can imagine, the potential for different loadouts depending on the mission is very high!

Looking at the combo list during one of the game’s loading screens, you might think “oh, all you do is press punch five times and you do a combo”, but it’s so much more complicated than that. When I say the combat system in Bayonetta is complex, that doesn’t seem to convey the message I want to put across. What if I told you there was a hardcover book, spanning over four hundred pages that goes over every single aspect of the first game... would that get the message across? There are a number of advanced techniques like jump canceling, dodge offset and stupid long aerial combos that players can learn if they want to, but none of these techniques are essential to completing the game. The depth is there if players want to explore it, the only problem is you have to find this information for yourself as the game doesn’t provide all of the answers.

The touch controls are supposed to ease newcomers to the fast-paced action of Bayonetta, though I don’t find them very useful. Bayonetta 1 & 2 both feature Easy mode and touch controls. If this is your first time playing either game, just stick to Easy and learn how to play properly using the traditional controls. It may seem harder than using the simplistic touch controls but you won’t regret it in the long run when you eventually move on to the higher difficulties.

Bayonetta 2’s incredible pacing has you constantly exploring new environments and fighting off bizarre creatures. At no point do you ever feel a specific section is dragging on because the developers never give you the time to get bored. You are shown so many new things in a short amount of time that it can be somewhat overwhelming at points, but that's the beauty of Bayonetta. These games are made to be replayed at least two or three times in order to master the combat system as you fight your way through the harder difficulties. Playing through Bayonetta 1 first made me appreciate the design of Bayonetta 2 in a way that I didn't back when it launched on the Wii U. I highly recommend players tackle the games in order, even if you've already played Bayonetta 1 and haven't played the sequel. Not only will it serve as a nice training session but it'll show you just how great the second game truly is.

The Switch version of Bayonetta 1 & 2 also features a few Nintendo-only treats that did not appear in the original versions. Bayonetta now has costumes where she can dress up as Link from the Legend of Zelda, Samus from Metroid, Peach and Daisy from the Super Mario series and Fox from Star Fox. This is a neat little addition to the game that brings some of that Nintendo magic to the Bayonetta series. The only costume worth using out of the lot is the Link costume as it automatically equips the Moon of Mahaa-Kalaa which typically costs 200,000 Halos. Bayonetta 2 now allows players to scan up to 32 Amiibo every day, granting access to several in-game items, costumes and Halos. I love this feature as it cuts down on the grinding that you have to do at the beginning of the game, though you do have to own a lot of Amiibo to hit the scan cap. Scanning 32 Amiibo after the first mission will give you enough Halos to purchase every move in the game. It’ll also leave you with plenty of cash to spend on health and magic upgrades.

There are sections in Bayonetta 1 that almost everyone that played it agrees are straight up bad. Thankfully, PlatinumGames dealt with the most annoying problems from the first game: they removed the annoying QTEs; they also increased the size of the levels, giving players more space to fight enemies; and added slightly different control layouts. The smaller, yet significant, changes include having Beast Within right from the beginning, not having to immediately dodge attacks as soon as you finish watching a cutscene, and the Umbran Climax ability (similar to Devil Trigger from the Devil May Cry series) to use your magic bar when maxed out. These changes might not seem drastic but they do enough to make an already amazing game even better.

An uncommon feature Bayonetta 2 has is the inclusion of online and local multiplayer. Tag Climax sees players take on hordes of enemies while simultaneously betting on who they think will obtain the higher rank on the level. The money can be used to unlock new techniques and purchase accessories. It’s an interesting idea as it doesn’t seem like there are many ways to fit in a multiplayer mode into this type of game. The Nintendo Switch version adds local multiplayer to Tag Climax, allowing each player to fight against each other using their own console and their own copy of the game.

I’m disappointed by the controls in Bayonetta 1. The default control scheme cannot be changed or remapped at all. This control scheme makes the game difficult to play in Handheld mode with the Joy-Cons. I would’ve appreciated if the developers had made Bayonetta 2’s default control layout the new standard (or at least an option) in the original game. It seems strange to add the touch controls to Bayonetta 1 but not make the controls remappable.

Speaking of the controls, the Bayonetta series serves as a great advertisement for Switch owners to pick up a Pro Controller (or pretty much any other controller available). The Joy-Cons are fine in both Handheld mode and in the dock, but they don’t feel anywhere near as good as the Pro Controller does. My issue with the Joy-Cons are the tiny buttons. They feel uncomfortable in a game like Bayonetta because you constantly have to attack, evade blows and spin the camera all in quick succession. In addition to this, Bayonetta 1’s only control scheme forces players to switch between the shoulder and trigger buttons constantly during combat. I found this to be awkward when playing in Handheld mode with the Joy-Cons due to the Lock-On action being assigned to R instead of ZL. It's not a deal-breaker by any means but you probably should invest in a different controller if you haven't already.

Performance wise, Bayonetta 1 appears to run similarly to the Wii U version of the game, however, the loading times have been cut drastically. In some cases, I noticed some scenes would load up to ten seconds faster. Bayonetta 2’s biggest improvement on the Nintendo Switch is the increased frame rate. Sure, the game might not look different compared to the Wii U counterpart but it sure runs a whole lot smoother. The performance in handheld mode does take a small dip in both Bayonetta 1 & 2, though it’s nothing that’ll ruin the experience. 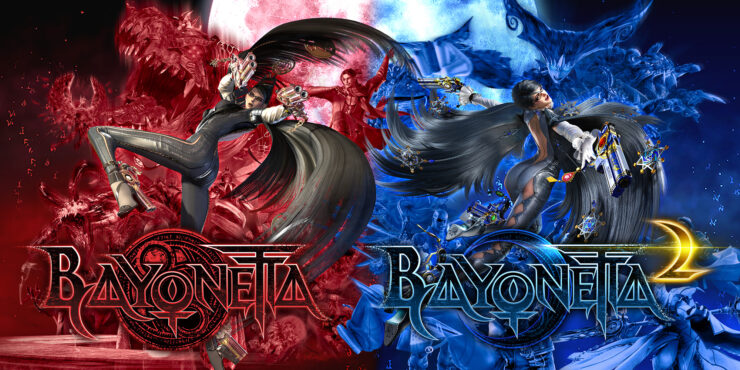 There’s a good reason action game fans will be looking to buy Bayonetta 1 for the fourth time and Bayonetta 2 for the second time. To create a series that includes an incredibly deep combat system, an absolutely insane story with the characters, music and gameplay to match the insanity, all while managing to satisfy both the casual and hardcore crowd is certainly no easy task. Bayonetta 1 & 2 rank as two of the best action games of all time, and now you can play them on the go. What’s not to love?

Bayonetta, Bayonetta 2 To Run At 720p On Nintendo Switch; Platinum Games Working On The Ports