For years, the affordable soundbar market has seen a divide driven into it. On one side, the budget manufacturers that push out cheap tech that barely sounds better than the 15w speakers inside your shiny new flat screen; on the other, premium units designed for Dolby Atmos and home theatre setups. For the gaming audience, there haven’t been many great, yet affordable, options to get the same output that a solid pair of cans can provide. That’s a nice option, but what about for those that want to throw a party and have more than just one player jamming to the Mario Kart 8 soundtrack? AVerMedia, a company most famously known for their game capture equipment, including the AverMedia Live Gamer Portable 2 Plus that I reviewed earlier this year, aims to bridge that gap with a $150 soundbar that hits a lot of the features of the premium models while fitting into players’ budgets. Against the likes of audio titans such as BOSE and Sonos, how does the AVerMedia Sonic Blast GS333 soundbar hold up?

Boasting a fair number of inputs depending on your wiring setup, the GS333 can work with nearly every console sitting under the TV. Only some of these cords are included in the box, including a variety of 3.5mm plugs and red/white RCA cables; if you plan on using optical audio, you’ll need to provide your own cable. While the option for a 3.5mm stereo cable is nice, I found this particular input to be fairly weak compared to the others. Both my phone and PS Vita required the system to be powered up beyond the 50% volume point before the AverMedia GS333 would even make a sound. On the same phone, switching to Bluetooth gave me a much greater volume range and control. Both RCA and Bluetooth sounded great, but not being tethered by cords when I’m moving about the apartment is always a positive.

No matter what genre of gameplay you’re in the mood for, the AVerMedia GS333 doesn’t fail to impress. Once you’ve gone through all of the cable setups and have the volume set right where you like it, all that’s left to do is sit back and enjoy the immersive audio. I had the pleasure of spending the past couple of weeks with my sound bar across a diverse range of titles, from the latest Assassin’s Creed and Call of Duty titles to rhythm games like Parappa the Rapper and DJ Max Respect. No matter what I threw at it, this tiny marvel filled my gaming room with sound and thumping bass from the GS335 subwoofer (at least before 10 PM in my apartment). The ambient noise of crowds and nature in Assassin’s Creed Origins were the most impressive, as I was able to hear the soft murmuring of whispers even during a hearty duel in the streets.

An optional accompaniment to the AVerMedia GS333, the GS335 Wireless Subwoofer helped hit those lower tones and provide a nice sense of aural feedback when dropping scorestreaks from above in Call of Duty WWII. The initial setup was a bit finicky as I had to go through the pairing process about four times before the two units finally matched, but every time after that it was as simple as turning on the soundbar and adjusting the bass according to the time of day. To set the maximum bass, a knob on the front unit can be adjusted, with finer tweaks to the intensity operated through the remote. When not being actively used to power the more explosive scenes, I’ve found that the Sonic Blast GS335 subwoofer tends to emit a quiet hum when the bass is turned up past a certain point. It’s not noticeable while in active operation, but it tends to make itself known in an otherwise silent room from time to time.

The AVerMedia GS333’s worst offender is the remote included in the box. Compared to the sturdy build of the audio unit, the tiny palm-sized remote feels cheap and ineffective. The controls offer only the barest of essentials: mandatory volume and bass controls, a button that needs to be pressed repeatedly for input selection which strangely omits the other inputs to make room for the mode selection which offers users the options between Game, Movie, and Music modes. Even on day one, the rubber buttons felt loose and unwieldy, making me fear for the longevity of the remote control. Thankfully, a small control array is available on the right side of the unit to switch between inputs and adjust the volume but offer little more than that.

I recommend finding the one input that works best for you, whether it’s Bluetooth, optical audio, or a standard headphone jack, and stick with it. Knowing which input you’re running through the GS333 comes down to memorizing the colors, as only a single LED on the front of the unit gives that indication. At a quick glance, it can be difficult to discern whether you’re on blue, aqua, or green as these are all much different inputs (blue being the standard for Bluetooth, of course). For the first few days I tested out this soundbar, I would routinely just have to cycle through the sources until I could find which one was actually running my PlayStation 4 audio through.

Overall, I’ve found the AVerMedia GS333 to be a damn fine addition to my workstation, providing the right balance between bass and clarity that a wide range of games is starting to take advantage of. When used for a singular purpose (or two, if you’re running Bluetooth from your phone from time to time), that’s when the GS333 truly shines. Pick an input and volume and stick with it; when you need to start adjusting the volume with the cheaply designed remote, that’s when the cracks in the build start to show. If you’re looking for a solution that can handle just about any song or game you can throw at it without breaking the bank, the AverMedia GS333 soundbar fits nicely into the mid-tier range. Designed for gamers, those willing to overlook some poor design choices can find a great upgrade to their battle stations.

Review unit provided by the manufacturer. You may purchase both the soundbar and the subwoofer via Amazon. 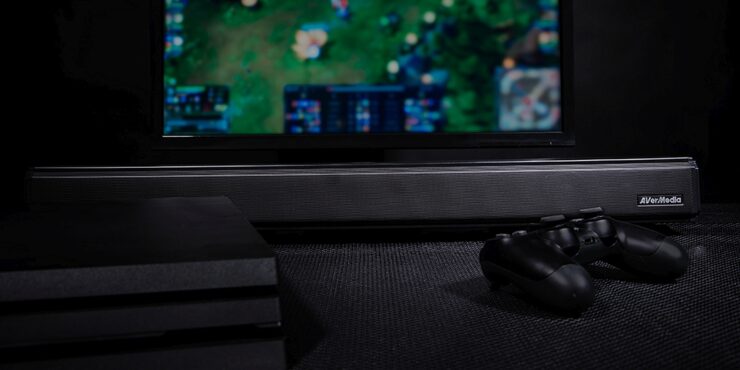 While some of the extra features, like a solidly built remote, are lacking, the AVerMedia GS333 certainly doesn't offer any shortage of sound and performance for gamers looking to upgrade their audio equipment.