The Attack on Titan phenomenon has gotten pretty big in the past few years, with several spin-off manga series, live action movies and video games. Last year, Tecmo Koei and Omega Force surprised fans of the series all over the world with the announcement of a big Attack on Titan action game coming to consoles and PC, and many started wondering how the typical Dynasty Warriors experience could be tweaked to work with some of the series trademark features. Despite some issues, which are, at this point, intrinsic to the Omega Force hack and slash experience, the latest Attack on Titan game is probably the most interesting game developed by the team in recent years, doing away with the mindless button mashing that usually defines the Warriors series titles and its spin-off games.

Attack on Titan's story mode, aptly named Attack Mode, follows the manga and anime's storyline from the very beginning, focusing on Eren Yeager, his adopted sister Mikasa Ackermann and their friend Armin Arlert. The three lived in the city of Shiganshina before it got invaded by the Titans, mysterious creatures who eat human for no apparent reason. The city was invaded following the breaching of Wall Maria, one of the three walls which defend the last human kingdom on the planet, by the Colossal Titan. As Eren and Mikasa lose their mother to the Titans, they decide to enlist in the military to eventually her and all those who have lost their lives on that fateful day.

Those who already know about Attack on Titan won't find anything truly surprising in the Attack mode in terms of story content, as it follows the manga and anime storyline closely, not counting some minor additional sequences never seen before. On the other hand, those who never had the pleasure of experiencing the series, will definitely find it engaging, as some twists and developments manage to keep it fresh and interesting. It's isn't a truly original tale, to be honest, but it's definitely well told. Those who enjoyed the anime will also be happy to know that the game includes Japanese voice acting. 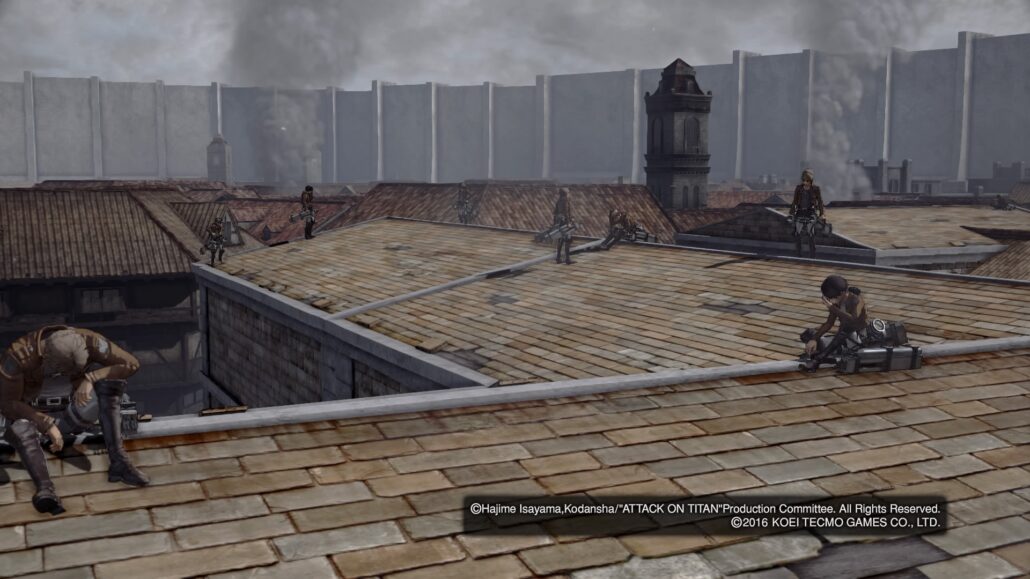 Where Omega Force's Attack on Titan truly shines, however, is in its actual gameplay experience, which is somewhat different from what one might expect. Some of the basic aspects of the Warriors experience are still there, such as the general hack and slash feel, but the execution is radically different from anything Omega Force did in the past. For starters, players won't have to contend with hordes of generic enemies, but with a somewhat limited amount of Titans of varying size and strength. To defeat Titans, players will have to attack them at the nape of their necks, which is the only way to kill one for good. In order to accomplish this, players will have to master the unique movement system of the game, which is powered by the omnidirectional mobility gear.

All military personnel in Attack on Titan comes with the right equipment to fight Titans: Blades, Scabbards and Canisters. Thanks to the already mentioned omnidirectional mobility gear, soldiers can grapple on the surrounding trees, rocks and buildings to launch in the air, with boosters helping mobility considerably. During battle, players will have to grapple on Titans' body parts, gather enough speed and then attack the specific part. Damage depends on speed and starting distance, so players will always have to be mindful of their position, their surroundings and the Titan's own movement. Smaller Titans can only have their napes attacked, while bigger ones can have their legs and arms attacked, some of them yielding materials which can be used for improving equipment. Destroying other body parts is also required for bigger Titans, as cutting their legs will impede their movements, opening up the way to the nape. With all these features, there's a very interesting strategic component that's missing from other Omega Force games, and this fact alone manages to elevate Attack on Titan to new heights.

The strategic elements of Attack on Titan's combat don't end with just picking the right position to attack Titans. Blades have limited durability and fuel is not unlimited, but they can be restored with the proper supplies, adding some resource managing aspects to the experience. Supplies aren't endless, but they can be replenished by interacting with other soldiers found on maps. There will be times, however, when no soldier will be on hand, forcing players to complete side missions, which usually involve with destroying nearby Titans, to obtain additional fuel, blades and restorative items. Flash and Smoke grenades also add more option when dealing with multiple Titans, a chaotic situation that players definitely want to avoid at all costs

As if all this wasn't enough, players also have the ability to put together squads during missions. Aside from mandatory squad members, which change depending on the mission, players can also recruit other soldiers when completing the already mentioned side missions, marked by smoke signals. Soldiers, whom are graded depending on their stats, can also be given simple commands which should make the Titans killing endeavors smoother. On the regular difficulty level, squad management doesn't matter all that much, but on harder difficulties, it can make the difference. 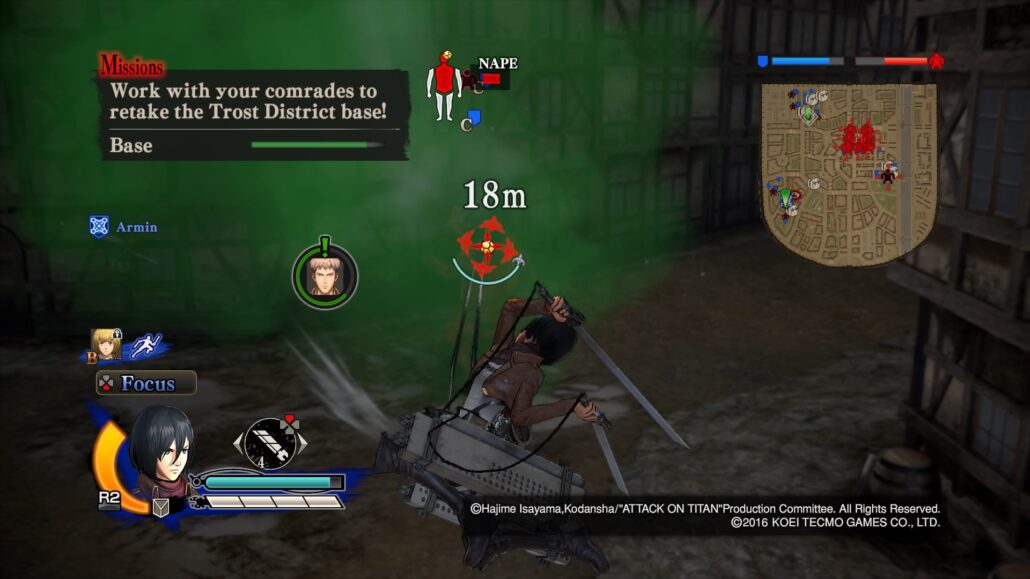 Despite the unique combat system and features, Attack on Titan doesn't manage to be any less repetitive than other Omega Force titles. Missions aren't that varied, with only minor variations such as protecting a character or a specific location, and what players will be doing mostly is fighting Titans. Watching your squad take on two or three Titans at once still evokes a very epic feel even after 15 or so hours, but it does get duller the more one plays. Maps aren't exactly varied either, so repetition is eventually going to set in, albeit much later than in other Omega Force titles. Survey Mode, which also includes a multiplayer option, isn't overly different from the Attack Mode, so expect to be fighting Titans all the time, no matter the mode you'll be playing in.

Like most Warriors games, Attack on Titan also comes with RPG features. After a mission has been completed, players will get their performance graded, which influences the amount of funds obtained and the type of materials rewarded. Both funds and materials are required to develop new items and upgrade already developed ones, increasing their stats. EXP points are also given to the whole unit and the used character, allowing them to learn different skills, some of them being extremely useful, such as Eren's spin slash skill or Mikasa's ability to execute follow-up attacks.

While the Attack on Titan gameplay experience is impressive and surprising, in a way, the same really cannot be said about the presentation. The graphics aren't anything to write home about, but they get the job done, faithfully representing the series' main characters and iconic Titans. Performance, sadly, is pretty uneven on PlayStation 4 with some noticeable frame rate drops when there are multiple Titans on screen. Locations, on the other hand, have a very samey look, which is definitely not Omega Force's fault, as they're inspired by the manga and anime. The soundtrack comes with some rather standard epic sounding tracks and some more rocking ones, which manage to get the job done, but won't stick in the players' ears for long.

Despite plenty of very interesting gameplay mechanics, and gripping story, Attack on Titan doesn't manage to become an absolute masterpiece, due to a repetitive gameplay experience. Thankfully, the game becomes repetitive much later than expected, so there's still some fun to be had in the first 15/20 hours. At the end of the day, however, Attack on Titan has got to be one of the most unique games developed by Omega Force in recent years, so the team definitely deserves some praise for breaking away from the button mashing norm they got players accustomed to with their hack and slash titles.

Attack On Titan is definitely the most interesting Omega Force developed hack and slash game, thanks to the unique movement system and combat mechanics which require more than simple button mashing. Sadly, this doesn't prevent the game from becoming repetitive due to uninspired maps and lack of mission variety. The game offers plenty of fun anyway, just don't expect a masterpiece that can still feel fresh after 20 or more hours.