The ASRock Z690 Aqua OC is themed in silver, grey, and black colors. This is a flagship product that retails at over $1000 US. The motherboard comes in the E-ATX form factor, measuring 30.5 x 26.7 cm, and is jam-packed with features.

Taking a look at the front of the motherboard, we see a design that would look great with almost any PC build. The silver looks with metallic and brushed metal accents look great. Despite being a overclocking-geared motherboard, this is the most streamlined designed I have yet to see from several offerings. 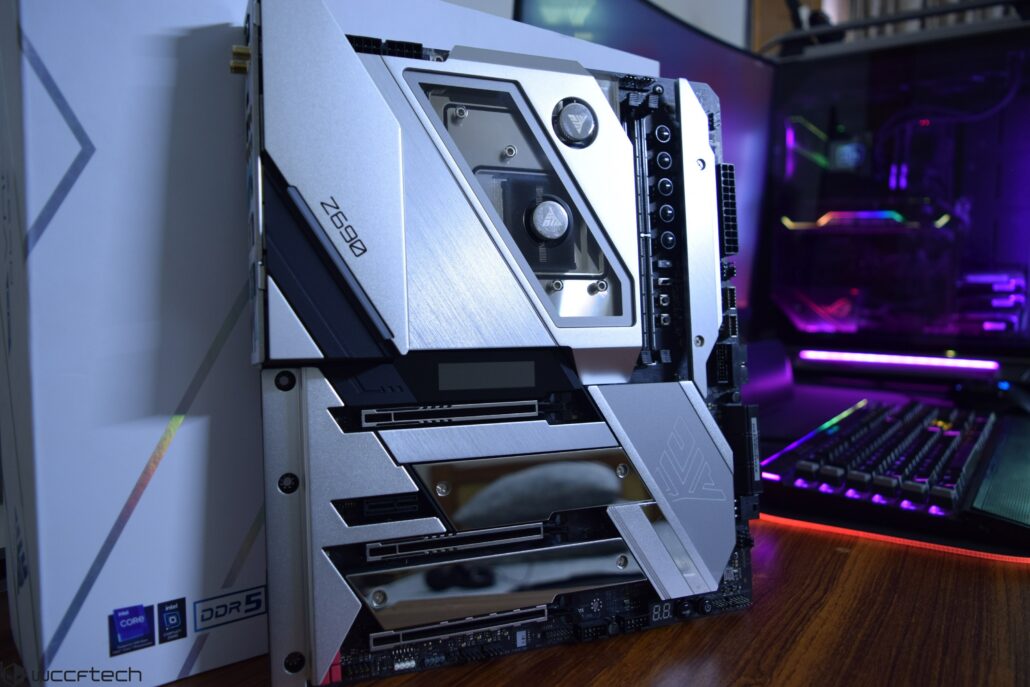 The back of the motherboard comes with a reinforced backplate that offers both durability and cooling. It also features a brushed metallic accent and has a separate backplate for the IO cover. 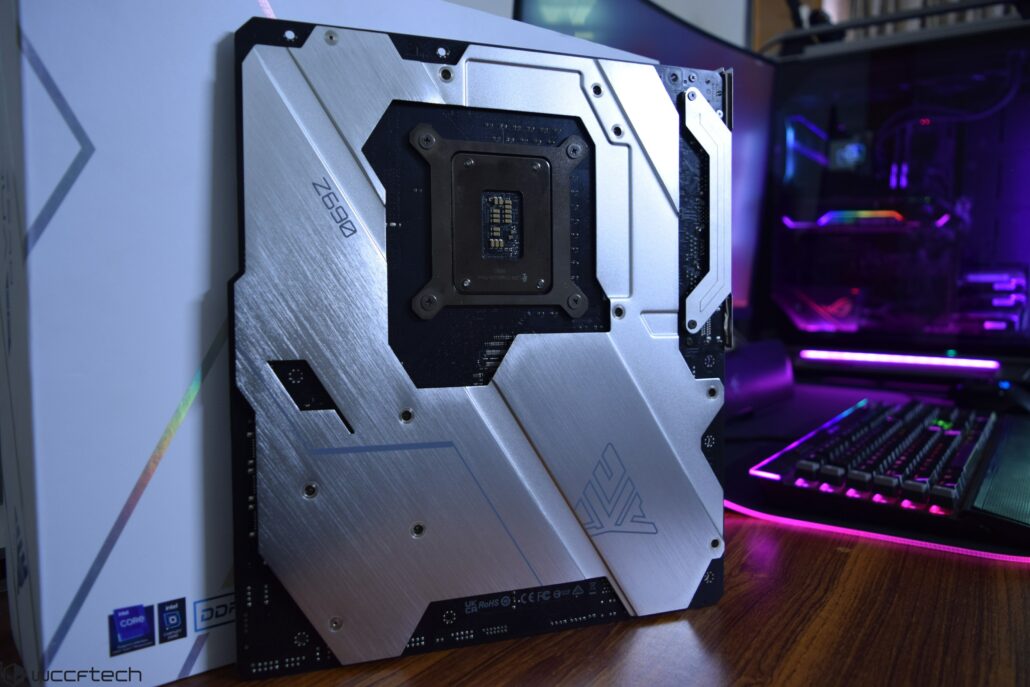 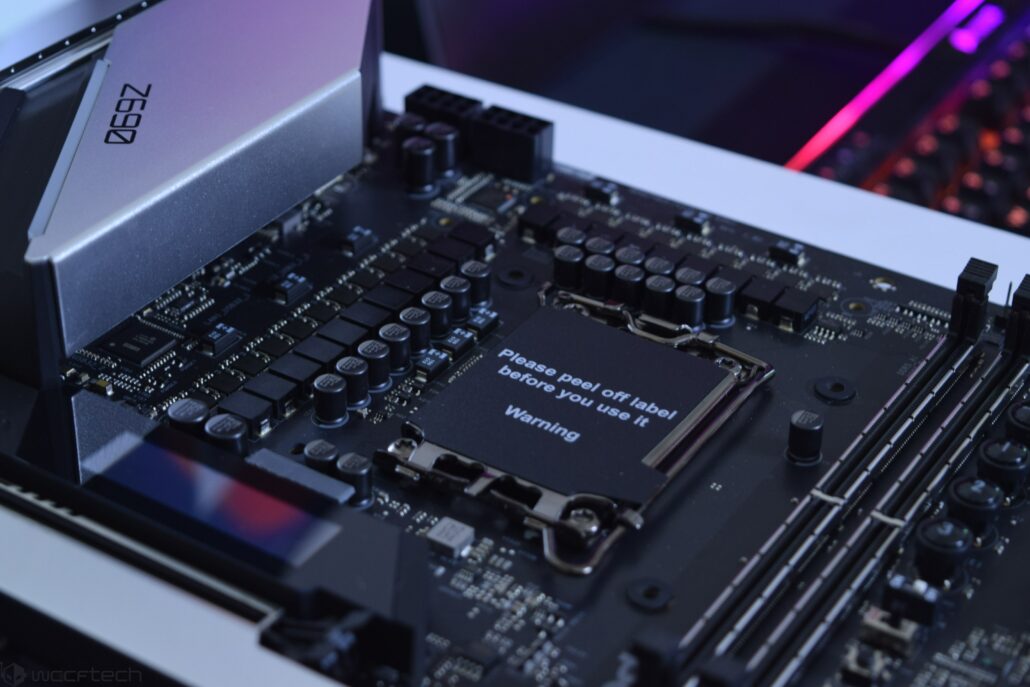 Next to the socket are two DDR5 DIMM slots that can support up to 64 GB of dual-channel memory. These slots are rated to support XMP profiles up to 7000 MHz (OC Plus). Each slot is labeled, making it easier to install DIMMs in the proper orientation. DDR5 memory comes with a different latch position so forcing a DDR4 module into a DDR5 slot will cause permanent damage. Each slot is also combined with a reinforced design to make sure signal integrity remains good while keeping the slots durable for long-term usage.

The use of two DDR5 DIMM slots makes the signaling better and is generally regarded as a better approach to memory overclocking than using quad DIMM motherboards. You do get restricted to just 64 GB of memory. 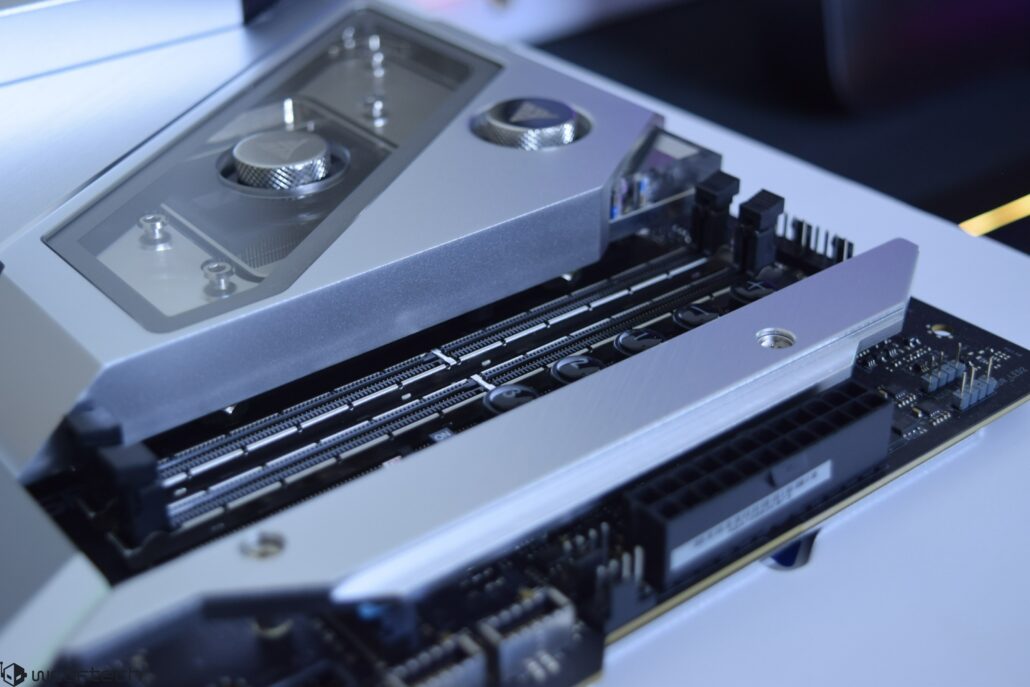 The ASRock Z690 Aqua OC packs a 20+2 phase power delivery configuration that makes use of the 105A Smark Power Stages. The motherboard also makes use of a high-end 12 layer PCB with a 2oz copper design.

As you can see, the VRMs are getting ample cooling from the whole water block. We will detail the water block in a bit. 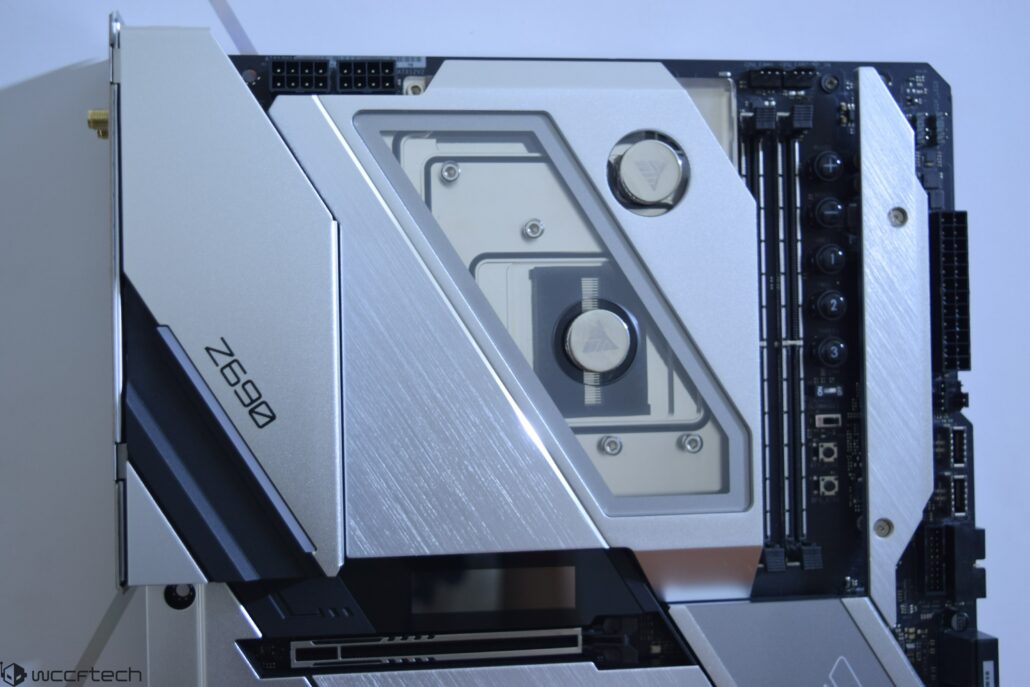 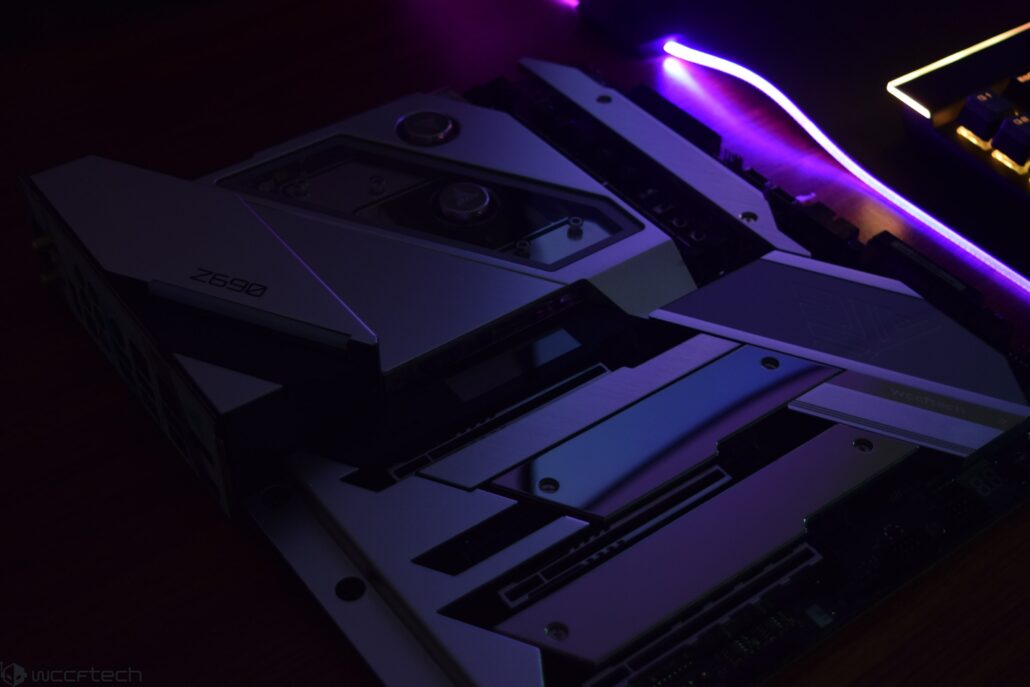 The whole heatsink design is based on ASRock's XXL Aluminum alloy implementation and is part of their 'Aqua Cooling' armor.

The ASRock Z690 Aqua OC comes with a stainless steel water block with machined cuts on the front to expose the aluminum skeleton within it. The water block provides cooling to both the CPU & the VRMs and features micro-channel fins for increased heat dissipation. The base plate comes with a removable film that should be removed before screwing the block back on the CPU socket. Treads used by the water block are G1/4 so compatibility shouldn't be an issue with most water-cooling PC setups. 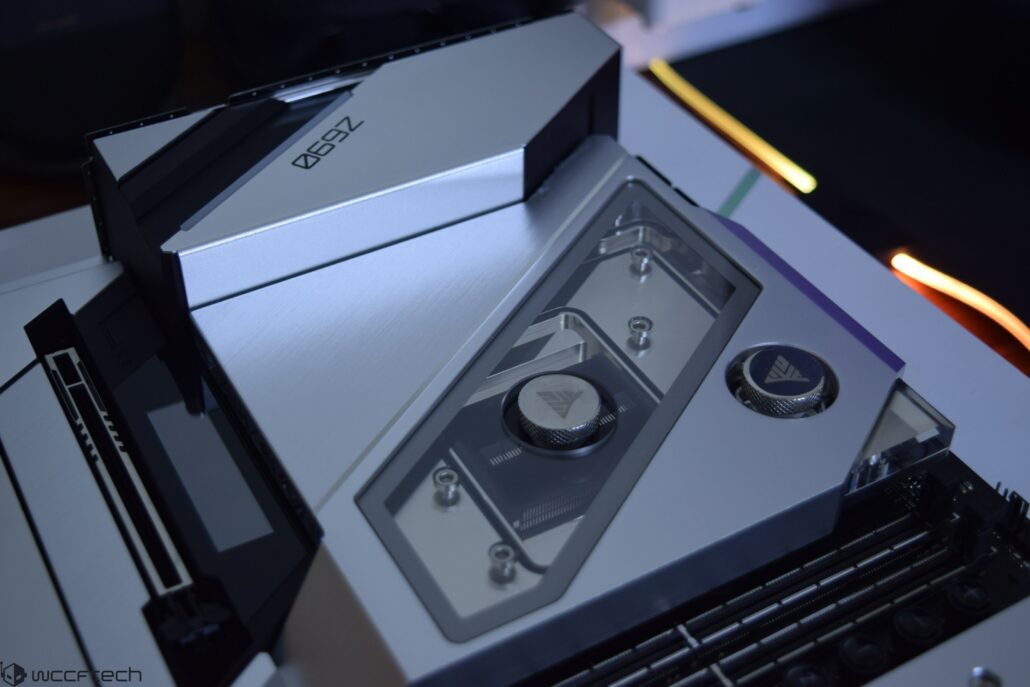 The Z690 & Aqua logos are laser-etched on both heatsinks and provide a nice aesthetic for the motherboard. Since this is a specialized media sample, the board comes with our own 'Wccftech' logo. 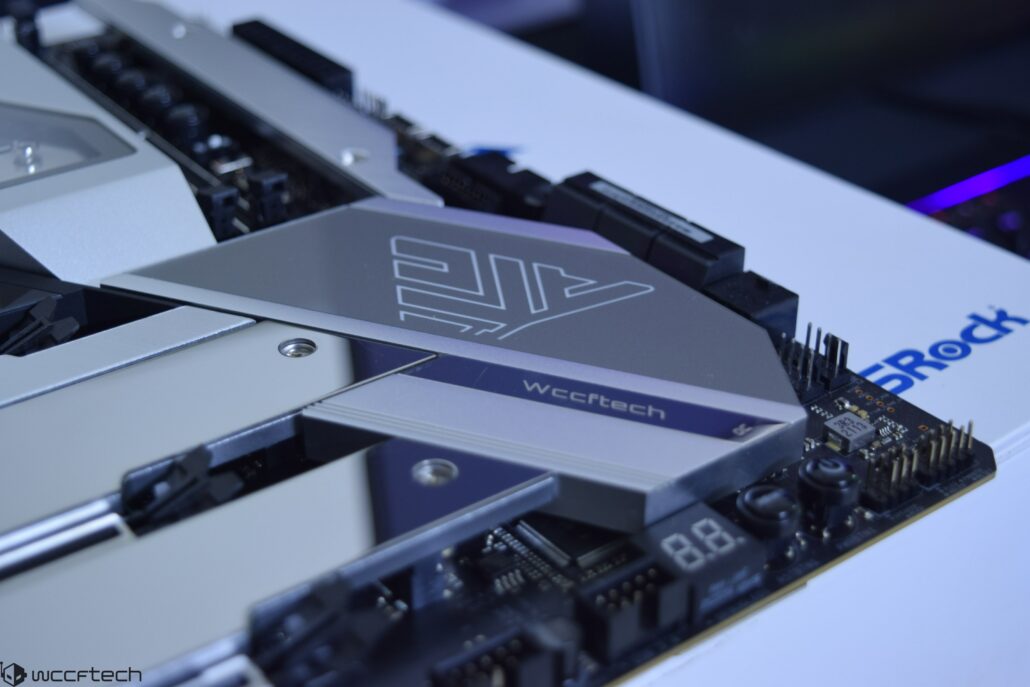 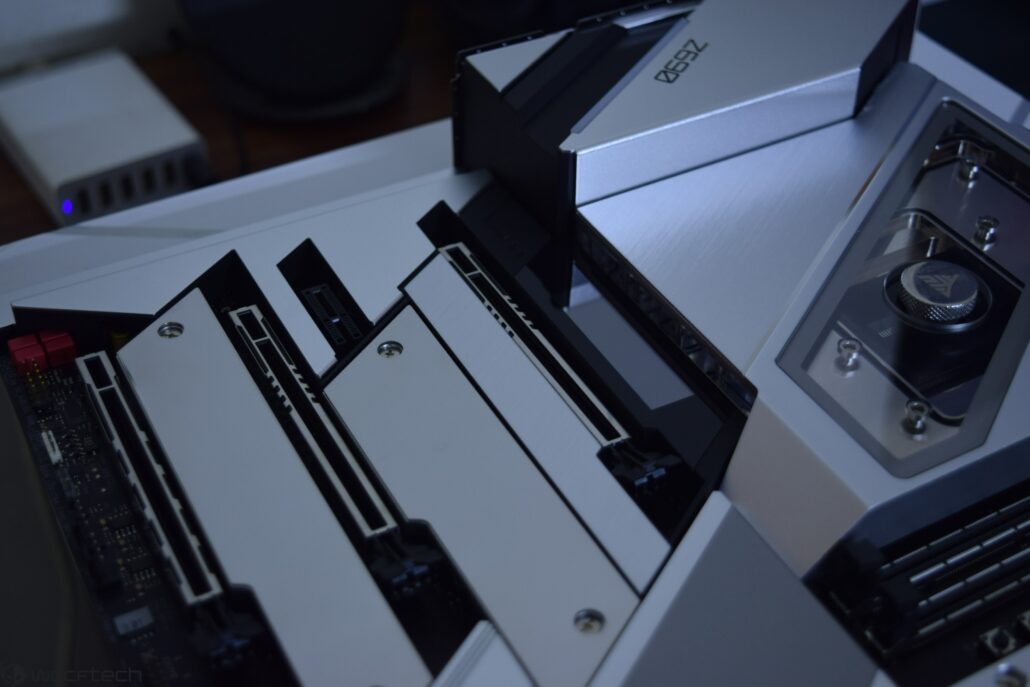 ASRock is using a metallic cover on the sides of the PCIe Gen 5.0 expansion slots as a part of its Surface-Mount Tech which provides protection to some extent. It adds more retention and shearing resistance by reinforcing the slots with metal plates. Aside from adding more protection, they are also said to offer ideal signal flow. 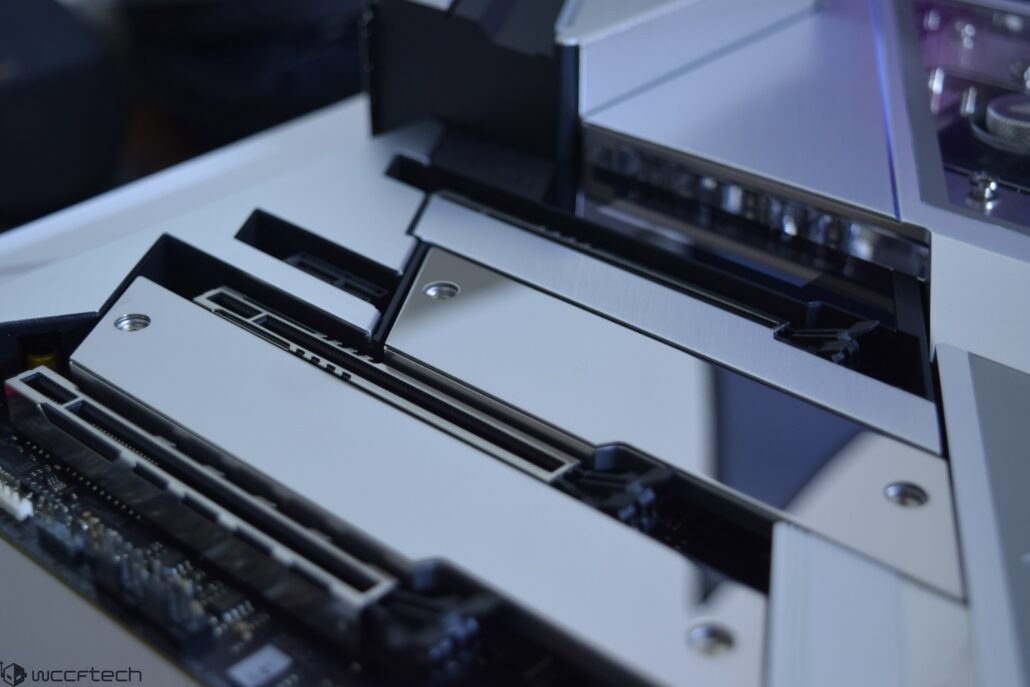 The triple M.2 slots are cooled off by the thermal pad and aluminum baseplate cooling. This is part of ASRock's M.2 heatsink cooling technology and ensures stable operation for M.2 storage devices. The thermal adhesive has a plastic cover over them which needs to be removed before using them with the storage devices. Two of the M.2 slots run between the PCIe slots while the third one runs next to the DDR5 DIMM slots.

The Z690 PCH is housed beneath a large heatsink with the Aqua logo on top of it and the 'Wccftech' logo on the mirror plate. The design on the heatsink cover is just for aesthetic since it has several RGB LEDs running on ASRock's Poly-Chrome Sync RGB technology. 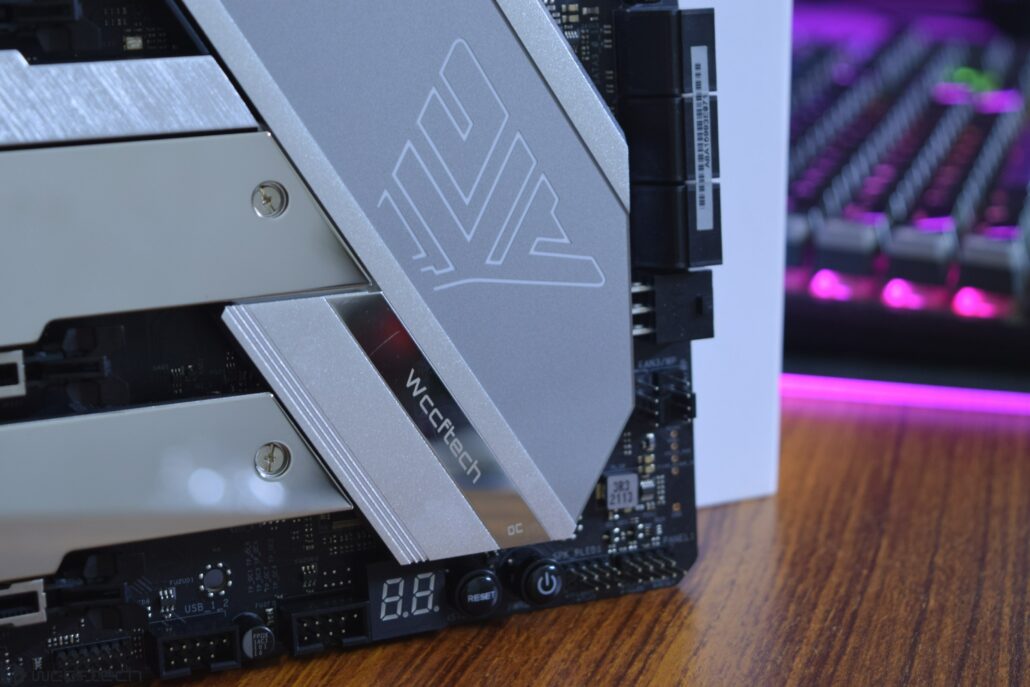 The whole futuristic vibe that the Aqua throws at you is just stunning and doesn't overwhelm you with flashy RGB or color schemes. It is a very professional-looking motherboard, designed for serious users. 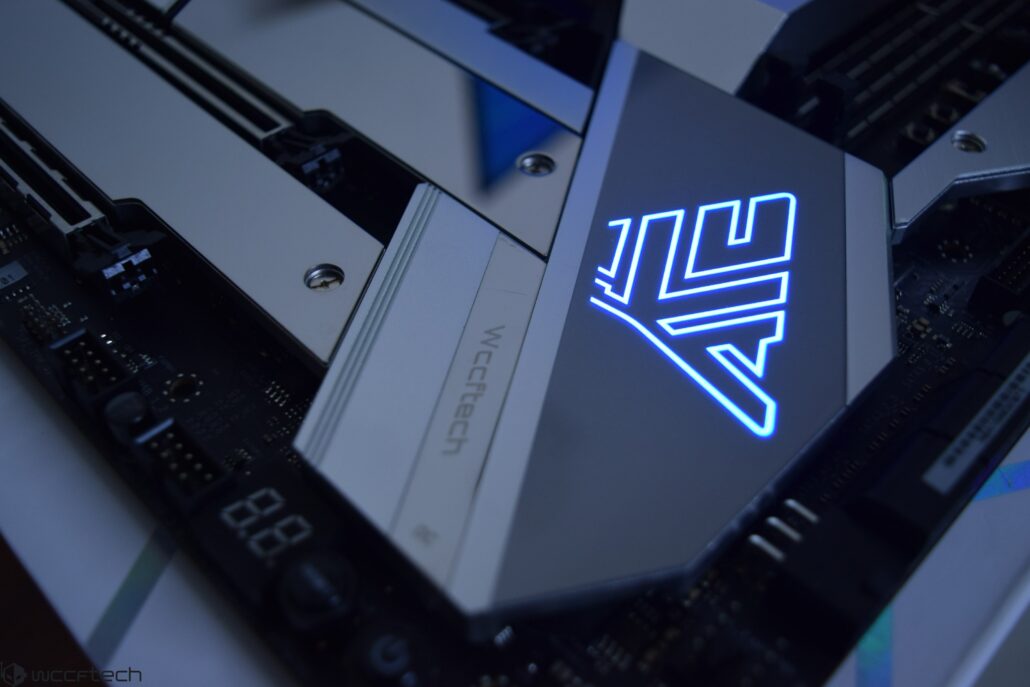 You have the option to disable all RGB LEDs on the ASRock Z690 Aqua OC board too.

Storage options on the ASRock Z690 Aqua OC include six SATA III ports rated to operate at 6 GB/s. These can support six different storage devices at once. There are also dual USB 3.2 (2x Gen 2 / 2x Gen 1) front panel connectors. Many fan headers and jumpers can be found beneath the storage ports. 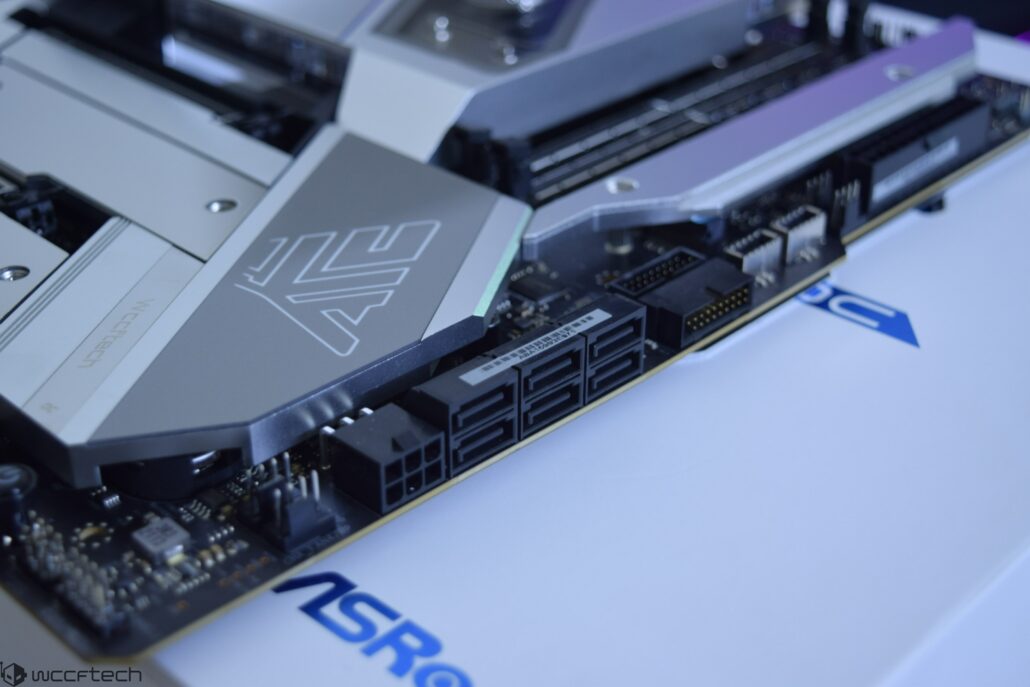 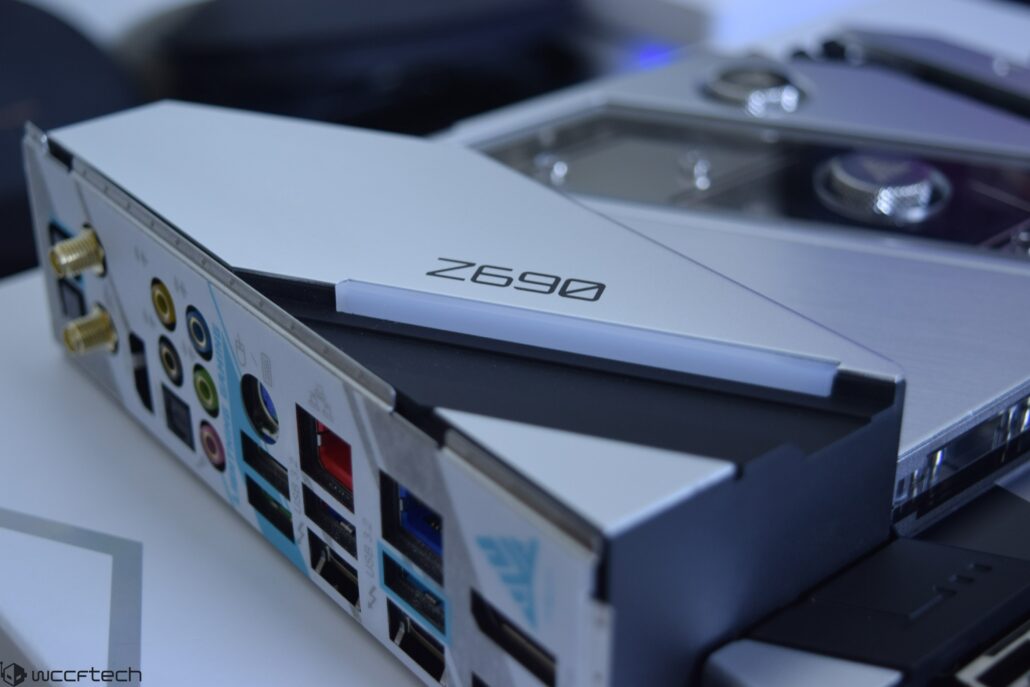 The full list of connectors on the ASRock Z690 Aqua OC motherboard is listed as follows. 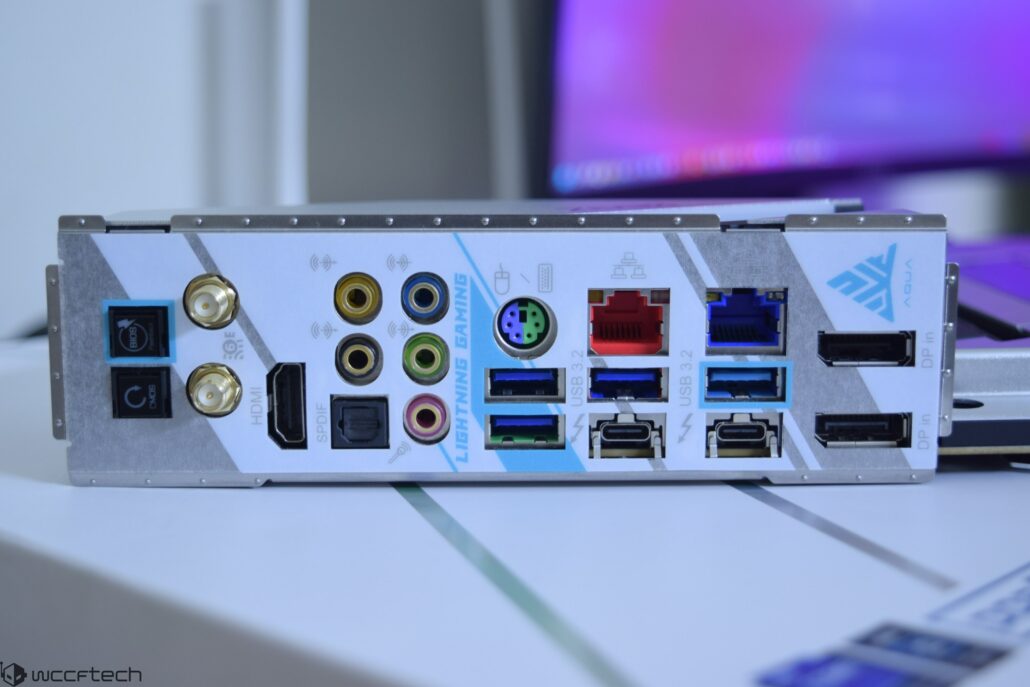 ASRock is using Intel's Wi-Fi 6E to power wireless connectivity such as 802.11ax WiFi (2.4G WiFi) and Bluetooth 5.2. In terms of Ethernet, the motherboard rocks an Aquantia AQC113CS controller that's powering the 10GbE and a Killer E3100G controller that powers the 2.5GbE LAN ports.

The I/O plate comes with an I/O cover with ASRock's iconic gear design that rotates in real-time embedded within it. Following is the full list of I/O on the ASRock Z690 Aqua OC motherboard: 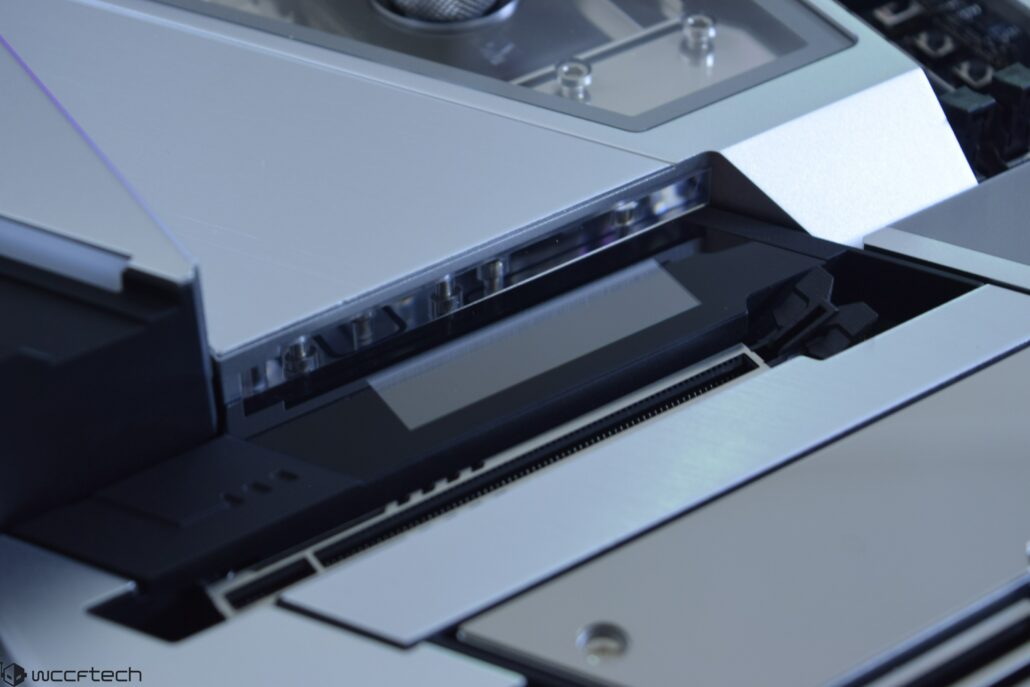 Users are greeted with an Aqua splash screen before they get more useful and real-time metrics such as voltages, temperatures, fan speeds, clocks, etc. Once again, this screen can be customized fully and gives a good experience if you are an overclocker looking for these measurements close to you.

There aren't the only OC-specific feature that you get on the motherboard. The Aqua OC features its own unique OC button design which includes Rapid OC buttons (+/- to adjust OC frequency), a slow mode switch, an LN2 mode switch, and three separate buttons which include OC profiles from ASRock's renowned overclocker, NickShih himself.