Despite being among the most unique gaming series ever made, the AquaNox franchise has been absent from the spotlight for a very long time. Following the release of AquaNox 2, and the canceling of the game's PlayStation 2 remake, the underwater world has been left unexplored, and fans of the series were forced to look elsewhere to get their dogfighting fix. If this was the price to pay to get Aquanox Deep Descent, however, it was a worthy one, as the game is not only a proper continuation for the series but also a very solid game in its own right, despite some issues here and there.

Aquanox Deep Descent is a re-imagining of the entire series, so players don't need knowledge of the prior entries in the series to enjoy the new story. Many of the staples of the franchise, however, are still in, but they have been expanded in a lot of very interesting way, providing a setting and a story that keep players engaged from beginning to end.

The world of Aqua is the reality humanity finds itself in following a great calamity that destroyed the surface. No longer able to survive on it, humanity had to adapt to underwater life, building settlements and cities, vaguely recreating the nations and the alliances that ruled the surface. Following a long cryogenic sleep, four different individuals find themselves in such an unforgiving world with no recollection of why they have been put to sleep. These individuals are Kaelen, former rogue and pirate, Nabila, second in command, and a former spy who refused to shoot down innocents during one of her missions, Nabila, a former US military officer, and Fedor, a successful scientist. Their going into cryogenic sleep has got something to do with a mysterious project called Project Nammu, upon which the fate of humanity seems to rest. With no recollection of their involvement in the project, the four cryos move forward into this desolate underwater world to reclaim their memories and uncover all the mysteries that surround them.

The Aquanox Deep Descent story is quite engaging, especially if one has an appreciation for dystopian tales, featuring the right amount of mystery that will keep the player pushing forward until the end. The underwater world setting is also well-realized, with multiple competing factions ranging from political alliances to pirate factions that make it feel alive and believable. The main characters may not feel particularly original, as they mostly fall into well-known tropes, but they are decently developed and they are entertaining enough to never feel too predictable.

While the engaging story can be more than enough to make some play Aquanox Deep Descent, it's the gameplay that will seal the deal for most, and in this regard, the game definitely delivers, despite some issues that are inherent to the genre as a whole.

Right after waking from cryogenic sleep, your team will be placed into a technologically advanced underwater ship capable of resisting the oceanic pressure and make underwater travel possible. The ship controls in a very peculiar way that requires a little bit of adjusting and some practice, especially for combat, as mastering movement and knowing when to use pressure charges to dash sideways, upwards, or downwards is extremely important to avoid receiving too much damage and complete missions successfully. Thankfully, the game features an extremely informative optional tutorial mission that teaches everything there is to know about the movement and combat basics, properly preparing the player for what is to come in the real game.

Aquanox Deep Descent is at its heart a semi open-world game featuring different medium-sized locations which feature, in turn, underwater cities and bases and plenty of optional areas that players have to go out of their way to explore. Despite the open world-ish gameplay, Aquanox Deep Descent can be a very linear experience if players stick to the main story missions, as they bring you from one area to the next pretty quickly. Backtracing, however, is always possible in case you want to gather more resources or complete sub-missions that reward players not only with credits but also with additional character development for the main cast. Minor development, to be honest but welcome nonetheless.

Exploration, while needed to get the additional resources to power-up and customize your underwater combat vessel, can get stale after a while, as the locations, tunnels, and labyrinths don't look all that different from one another, but thankfully combat manages to allievate this issue. Enemy variety is good, with a lot of different ship classes and underwater creatures, and so is weapon variety. Your ship can equip two different weapons at the same time, one on the left and one on the right, as well as two different modules that grant access to special abilities like a devastating dashing attack, a missile barrage, floating mines, and so on. Finding the right loadout is where the real fun begins, as there are some extremely powerful combinations that can take down every opponent with ease. Additionally, regular weapons can be switched on the fly, so it's possible to adapt on the fly to any situation and any opponent. This versatility makes the Aquanox Deep Descent combat extremely fun.

To get all of these options, however, players will have to work hard. While some of the additional ships and upgrade options are unlocked through story progression (and must still be purchased with credits and resources), others can only be unlocked by salvaging the remains of other ships scattered all over the maps. This is why exploring in Aquanox Deep Descent is so important, although not particularly exciting by itself: not only players can discover new weapons and modules by fully exploring the maps, they can also find the resources needed to purchase them, as they are extremely scarce otherwise. Some of the salvaging spots also hide logs that provide more information on the world and its backstory.

Even with the most powerful of weapons, don't expect Aquanox Deep Descent to be a walk in the park. The game forces you to always be on your toes, as enemies come from all directions during combat scenarios, and they are extremely accurate and deadly, even at the lowest difficulty setting. As such, proper mastery of the controls may not even be enough in some situations, and players will have to use rocks, and every other cover spot offered by the environment to make it out of combat alive. The radar and the on-screen indicators make it easy to see from where enemies are coming from and from where you are getting shot, so the game does provide every bit of information needed to survive the toughest underwater battles.

The excellent combat mechanics, however, are not enough to make Aquanox Deep Descent a flawless masterpiece. Mission variety is, sadly not all that great, as they mostly involve reaching locations marked on the map, shoot enemies down or destroy nests, underwater reactors, or other similar structures. There are a few variations on the theme, such as escorting missions, but they always result in combat sequences. This, to be honest, isn't a flaw specific to Aquanox Deep Descent, but to the genre as a whole, but it still hurts the experience a bit: this would have been a much bigger issue if combat was lacking, but thankfully it is not the case here.

Aquanox Deep Descent also comes with some nice multiplayer features, such as drop-in co-op for up to four players and a good selection of competitive modes. Sadly, I was only able to get in a single match against one player, but the netcode seemed to be solid, with little to no issues during the match with a wired connection. If things will hold up as nicely when more players will play the game remains to be seen.

On the presentation front, Aquanox Deep Descent mostly delivers. The game is definitely not among the best looking games of the past few years, but it manages to make the underwater world interesting with tons of detail, which are also used to differentiate different biomes together with a wise utilization of lighting. Ship models are on the simple side, but they get the job done and don't look too simple to get distracting during gameplay. Optimization is also very good, as the game ran at stable 60 frames per second at Very High settings 1440p resolution on the test machine featuring an i7-3770 CPU, GTX 980 Ti GPU 16 GB RAM.

At the end of the day, I really enjoyed my time with Aquanox Deep Descent thanks to the engaging story and the great combat mechanics. Mission variety could have been a little better, that's for sure, but do not let this stop you from getting the game if you're a fan of the series: it really couldn't have made a better comeback. 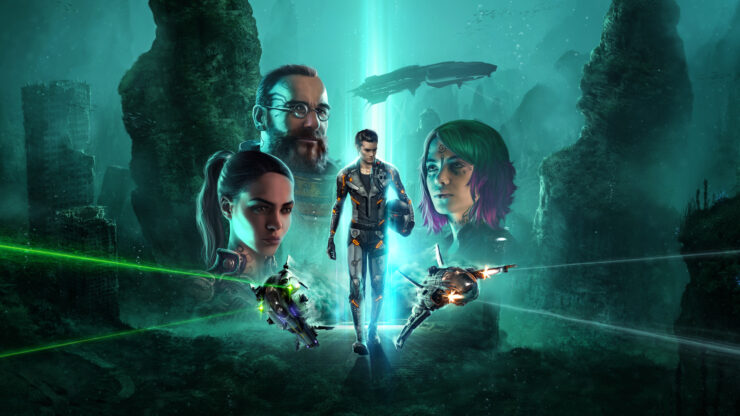 With its interesting setting, engaging story, great combat mechanics, and tons of customization options, Aquanox Deep Descent is a more than worthy new entry in the classic series. Bland mission design and a repetitive structure does damage the experience a bit, but all those that enjoy dogfighting games, no matter where they take place, will find plenty to like in the game.