PC, PlayStation 4 and Xbox One (both coming later)

Antigraviator is an anti-gravity racing game set in a future where racing has exploded in popularity due to breakthroughs in terraforming and anti-gravity technology. As a result of this global phenomenon, the antigraviator tournament was born. This is where the game’s single player campaign takes place. Spanning seven Grand Prix (GP), each with four tracks, players are able to experience all fifteen tracks Antigraviator has to offer.

These tracks take place across five environments: urban, desert, arctic, space and island, with each environment featuring three unique tracks. Throughout the campaign, players will see all three of Antigraviator’s game modes: Single, the normal lap-based racing you see in every game; Deathrace, last car left on the track wins; and Countdown, drive through the checkpoints to add more time to your constantly depleting clock.

As you might expect, driving in Antigraviator is incredibly fast requiring quick reactions, in-depth track knowledge and clever use of your boosts. As you drive along the track, you’ll be able to pick up containers of energy that allow you to either receive a small boost or place a trap. The trap system, while it seems like a good idea, has been executed poorly. You have to meet two conditions before being able to place a trap. The first condition requires the player you want to hit with a trap has to be behind you (shocking, I know). The second condition forces you to have two bars of energy stocked up. When you place a trap, there isn’t any feedback to tell you whether you’ve managed to hit someone or not. I cannot understand why the developers would not allow players to deploy the traps whenever they want. Getting hit by a single trap can be the difference between coming in first or last, so you’ll probably want to avoid them. The trap system is so bad that I’d argue the game would be better off without it.

Each GP rewards the players with credits that can be used to upgrade your grav (this is what the developers call the vehicles). Sadly, each GP forces the player to pay an entry fee. Regardless of whether you’ve won a GP in the past or you just keep losing, you are forced to pay the entry fee again to participate. You can get around the entry fee by retrying each race, though I am almost certain this is a bug and not a feature. It’s frustrating to have to pay each time you want to play in a GP because some of the more difficult tournaments have a high entry fee. I also ran into a number of bugs throughout my time with the game like falling through the track mid-race and having the game crash when loading up another level. These bugs did occur prior to the game’s official release so there’s a chance they may have been fixed down the line.

When you are juggling between entering a tournament that could pay well or upgrading your grav, it can be a tough decision that you really shouldn’t have to make. It’s important to note that you are basically forced into upgrading your grav at a certain point in the game as it can be difficult to compete if you stick with your default vehicle. It would’ve made more sense to have the upgrades not cost any money, but then the developers couldn’t artificially lengthen the game.

As I mentioned earlier, one way you can earn credits is by placing well in the GPs. The other way is to win ranked games online. The only problem with that second option of earning credits is that there’s almost no one online. I’ve spent a long time searching for different players across a number of days and I couldn’t find a single person to race against. If you can manage to convince your friends to pick up Antigraviator, you’ll be happy to know the online multiplayer supports up to eight people. Though the game has not launched on the PlayStation 4 or Xbox One just yet, hopefully the developers are seriously considering cross-platform play to get the player numbers up. Funnily enough, I’ve found that Antigraviator is best played as a local multiplayer game. If you do try out the split screen mode, you will probably want to play using a large TV as it really helps to be able to see the track clearly.

I’m happy to say the performance on PC (Intel 6700K, NVIDIA GTX 1080) has been great at 1080p/240Hz and 4K/60Hz. Antigraviator looks impressive when running at a high refresh rate and glad to see it supports both high refresh rates and high resolutions. Four player split screen multiplayer also did not seem to have a negative impact on performance. There’s no option to change any of the default controls or alter the HUD in any way. This is disappointing as there are a number of people out there who depend on being able to remap their controls. Again, hopefully the developers will address this in a future patch. 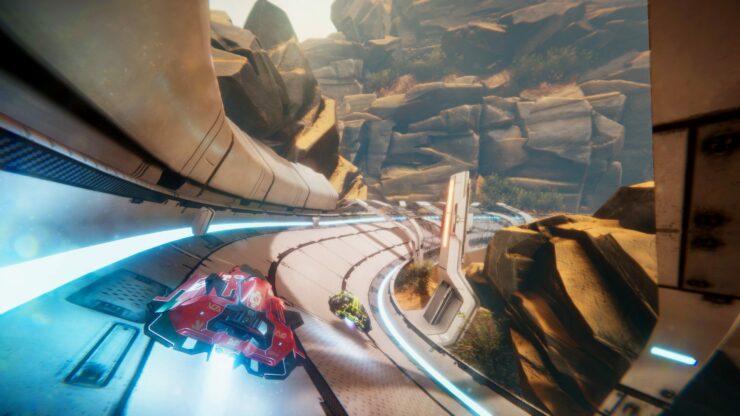 When it comes to anti-gravity racing games on PC, there really aren’t that many that could possibly match the level of games such as Wipeout and F-Zero. Antigraviator is enjoyable in short bursts, though that soon wears off once you’ve put enough time in. Sadly, that amount of time is roughly an hour or so before you start to realize the game is very one-dimensional.