Amazon Fire TV Review: The Gift That Keeps On Giving

The Amazon Fire TV is quite honestly a steal. It's like going to the store, and robbing it for the value that you get from this ARM based box of sleek and shiny power.  I myself have been a user of the Apple TV (2nd and 3rd gen) for the longest time, along with testing your usual Roku and some other brands that are not as mainstream in terms of delivering content.

With Amazon Prime, you literally have thousands of movies and premium television shows on-demand, something that certainly rivals if not surpasses Netflix in terms of license distribution and availability region-wide (though not in terms of Europe). This small box not only has 3x the processing power of an Apple TV, but also 8x the internal storage capacity along with 4x the pure memory with an even lower overhead. This box is an absolute no-brainier, even for die-hard Air Play fans who cannot part with their Air Play feature.

Amazon truly has a winner with the Amazon Fire TV - both in terms of its design, performance, and price point.

The Amazon Fire TV has the following specifications: 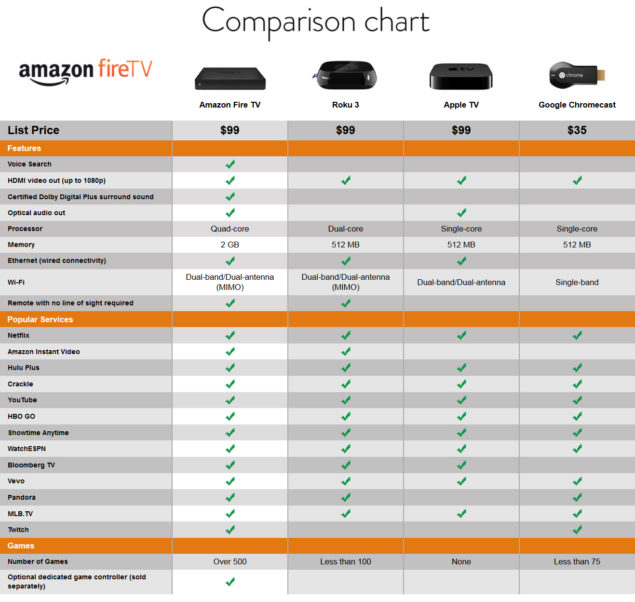 Looking at the table above, it's clear the Fire TV does it all. What I loved about the Amazon Fire TV is that it was not just a device that said "hey look at me, I can compete on paper!" It is a device that truly ended up delivering in terms of its performance, which took me quite a few weeks to put to the test in terms of a real-world performance load, and also synthetic load procedures which just had to be clear (testing was done over 1 month and 24 days).

The Amazon Fire TV is not just made for 200,000 TV shows + Movies combinations. It is made for music. On top of being able to rent movies/TV shows or being given a ton of them with just a $99/year Amazon Prime membership, you can also listen to music from Prime music service. This service I tested out for roughly 2 weeks, but found myself using Spotify instead or Songza by side-loading it, which we will get to in a minute.

I absolutely love the amount of applications this thing comes with.  In terms of the gaming application, we did not receive a controller to test out the games fully other than besides benchmarking the FPS on the games. 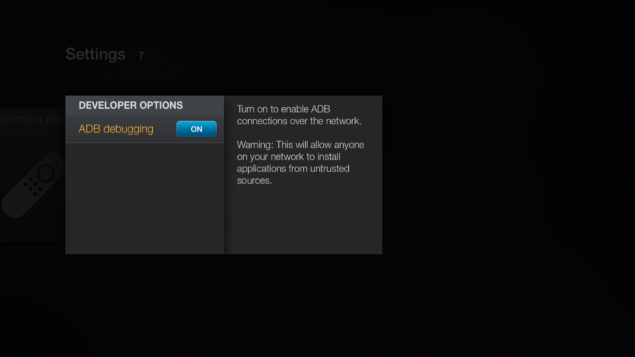 One thing I have to give Amazon kudos for here is the ARM-based processor on the FireOS based on the Android platform. It was an incredibly wise choice, considering they also enabled installation from unknown sources and ADB Debugging - something they could have easily taken out - but it is very clear that Amazon is trying their best to allow development on their kit or at least extensive debugging features for people / modders. 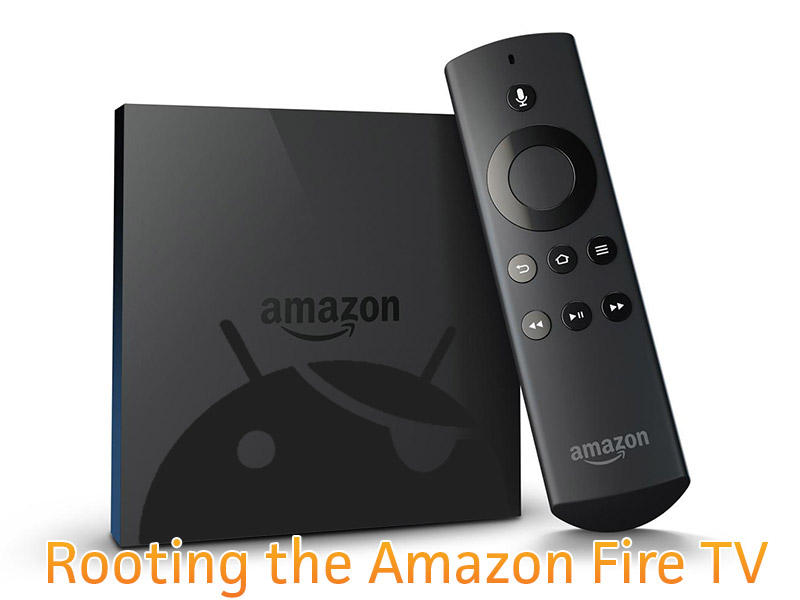 Speaking of modding, the Amazon Fire TV is one of the few boxes which can be "rooted" for access to the file system. This is nothing illegal, though it does break your warranty, and all it does is serve to make your box more stable and allow for better backups and for application that require root (like filesystem explorers which make life so much easier). For those who do not want to root, you can still navigate the file system in terms of ADB debugging, but it is less convenient. Amazon updates do end up breaking root-based initiatives, which is an obvious disappointment, but I suppose it is something they are trying to control the market for due to the types of terrible people who root a box and upsell it for a higher MSRP.

Currently, rooting is immediately broken when the Amazon Fire TV attempts to update the device box right away. It is required to keep ethernet to the device disconnected at any interval, while also trying to bypass the update function and get to the home menu to check for ROOT compatibility and enable ADB Debugging. 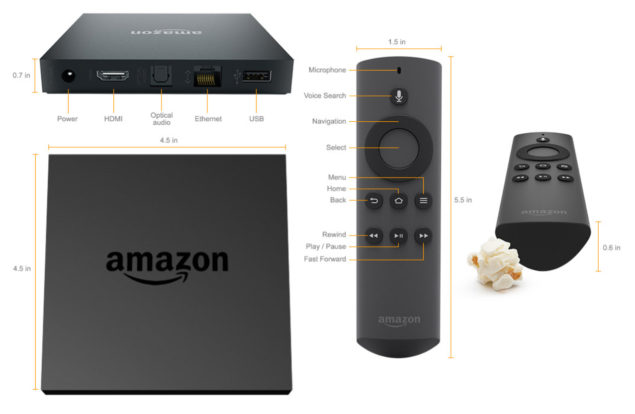 The Amazon Fire TV sizes excellently well, with the back including HDMI/optical audio and a 10/100 Mbps ethernet connector which can get up to 100 Mbps. Hey it is no Cat 5e proof ethernet connector for Gigabit streaming, but I highly doubt the quality of movies will approach 500 Mbps anytime soon (with Blu-Rays capping out at nearing 36 Mbps). 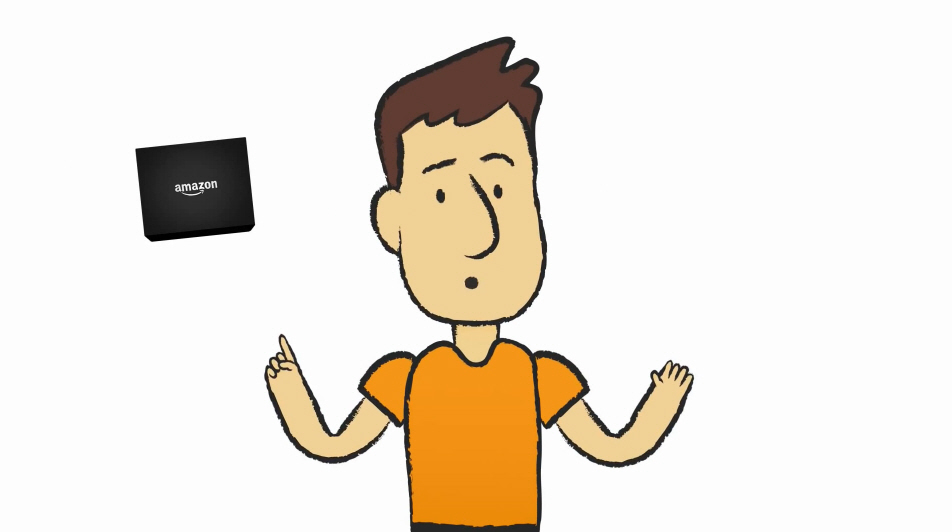 The Amazon Fire TV remote feels very nice on the hands with the same brushed black coating glaze as the original unit. It feels simple, and does not overwhelm someone with too many options, but just the right amount. One thing I always loved about the Apple  TV was the simplistic design and 2 buttons, but it felt rather underwhelming and rightfully because the Apple TV simply did not even have enough freedom in terms of it's incredibly slow user interface / iOS mobile platform. Nothing with the Amazon Fire TV felt overwhelming, and the beautiful introduction videos really make you feel 'at home' with its sleek graphical presentation of a man dressed in Amazon style colors in an orange shirt and black pants. 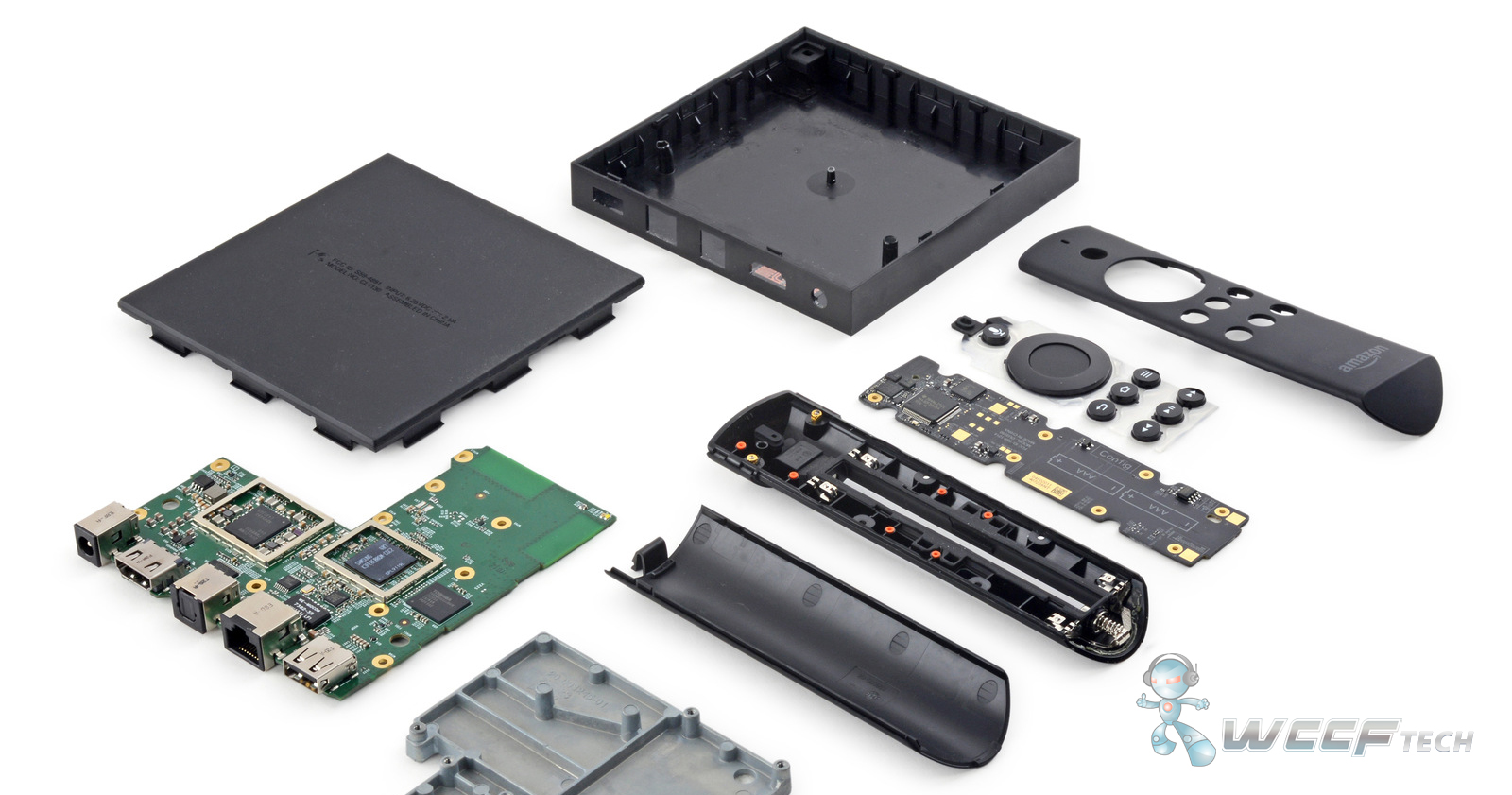 Breaking down everything about the unit was slightly complicated, but nothing incredibly difficult. The barebones setup shows high quality parts with gold-plated connectors and trims around the SnapDragon 600 system on chip. 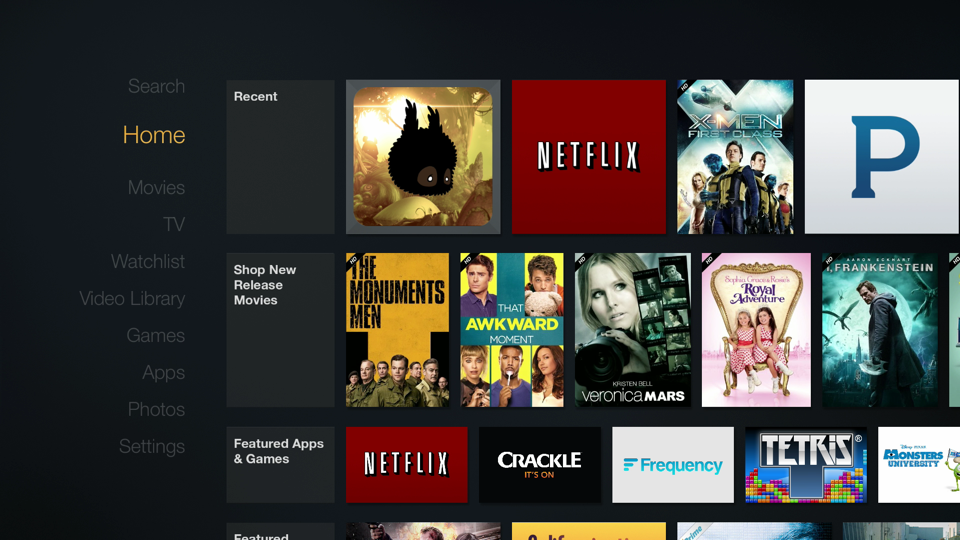 The Qualcomm Adreno 320 GPU instantly makes it apparent how much more smoother the Amazon Fire TV interface truly is right when you get to it.

I absolutely loved the sleek interface, and I obviously went right for XBMC (the media center) now renamed to Kodi. These guys have created quite the program for local streaming / media management (something I will get into with our upcoming entertainment feature), and the Amazon android-based FireOS allows for "side-loading" via ADB Debugging. Basically you can install anything and any .apk package whether it is right on the internet for ONLY mobile devices or the Fire TV itself. This exceptional feature opens up applications from the Google Play store (which is missing from this device, but uses the universal Android APK package compiler). 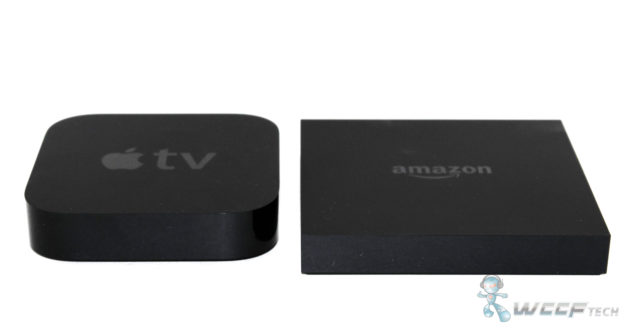 In terms of CPU performance, we measured thermals on top of the actual performance playing Blu-Ray files via XBMC, and testing out the Movies/TV rentals feature - which worked flawlessly. Blu-ray rips via Nero and our BD-ROM never had streaming issues on wired connectivity, let alone wireless connectivity which speaks highly for the connectivity of the device over the Apple TV and also the CPU processing power in terms of the XBMC overhead. This device simply outperforms the Apple TV in every single aspect for a lesser cost. Apple needs to step their game up if they want to keep the Apple TV relevant.

The Fire TV never went above 44 degrees Celsius, and the graphics processing unit was tested in terms of the games on the platform using GFXBench. The frames per second of the very heavy 3D games averaged roughly 26-28 frames per second. Not exactly the fastest, but did not run choppy at all to be very degraded in terms of the image quality presented, which was great for games.

The voice functionality of the Fire TV is revolutionary - using some sort of insane coding magic to pick up almost anything you say. For the 2 months I have owned it, I actually never had to type in anything other than passwords or SSID's that were not broadcasting. 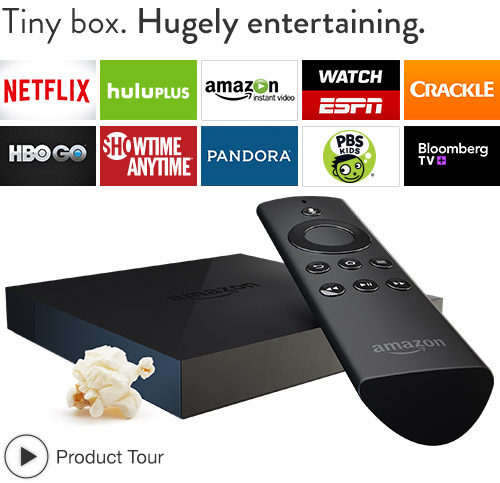 The Amazon Fire TV is a marvel of technology, simplicity, and just something which tries to deliver a free-form experience by allowing side-loading/installation of any unofficial apk off of its own Appstore, and ADB debugging for more flexibility. The potential for rooting is quite available (though we did not test this), and many users will find this box their go-to purchase when it comes to streaming anything for quite a long time to come.

The Amazon Fire TV has very few issues in the way it works or performs. I do wish that more hardware developers allowed rooting or true open source functionality, but we can understand the sorts of liabilities that this imposes for the manufacturer.

Despite this small issue, the Amazon Fire TV is so good - that it made me go out and buy 2 more for myself. If you are looking for the next best thing in streaming/renting/watching movies or being able to run XBMC/Kodi, this is your device.