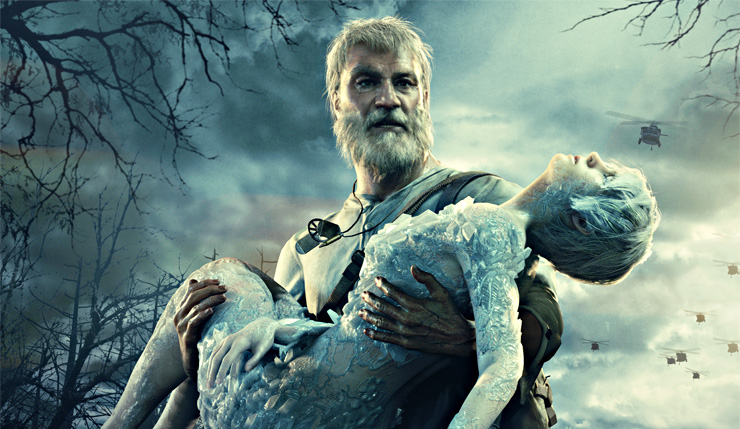 Thought you were finally done dealing with Resident Evil 7’s nightmarish Baker clan? Not so fast. Last month Capcom unveiled the final two Resident Evil 7 DLC add-ons, End of Zoe and Not a Hero, and now they’ve provided more details via a tantalizing (and terrifying) new trailer. You can check it out, below.

End of Zoe shows players what happens to your doomed Baker Family ally after you give the biohazard cure to Mia, leaving Zoe to die. Yes, RE7 lets you give the antidote to either Mia or Zoe, but it seems choosing Mia is the “canon” story path. The trailer provides a glimpse at an enigmatic new character, who Capcom identifies as “Joe”:

End of Zoe features a mysterious outdoorsman named Joe who lives along the bank of the marshes and has a chance encounter with Zoe that sets both their fates in motion.

Who is Joe? Is he truly a new character, or somebody from past? Will this really be the end of Zoe? We’ll just have to wait to find out.

The new trailer also provides another look at Not a Hero mode, including some hints about Lucas Baker’s twisted plans.

Not a Hero features the return of Resident Evil fan favorite and veteran BSAA soldier Chris Redfield. Taking place after the horrific events that befell Ethan Winters in Resident Evil 7 biohazard, Chris is on the hunt for Lucas Baker to bring an end to the Baker tragedy once and for all. BSAA agents had tried to take on Lucas previously, but were unsuccessful and themselves became captives of the menacing trickster. Can Chris save the team while also tracking down Lucas through perilous poison gas filled dungeons?

End of Zoe will be available to those who purchased Resident Evil 7’s $40 Season Pass, or for $15 on its own. Not a Hero mode is free for all RE7 owners. Capcom has also announced Resident Evil 7 Gold Edition, which will include the original game and all the game’s DLC, including End of Zoe and Not a Hero.

Resident Evil 7 Gold Edition, End of Zoe, and Not a Hero hit PC, Xbox One, and PS4 on December 12.