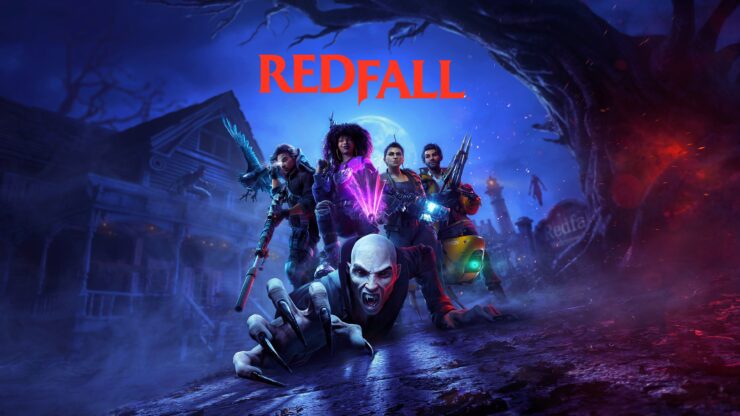 The last game to be unveiled during Microsoft's Xbox & Bethesda E3 2021 conference was Redfall, the next title in development at Arkane Austin (Prey). It's an open world cooperative shooter featuring a city overrun by vampires, and it'll be released in Summer 2022 for PC and Xbox Series S|X.

Every game we make is a little different for the last. Dishonored featured stealth. Prey leveraged tons of physics-related gameplay. Mooncrash introduced rogue-like elements. Despite those differences, in every case our focus remains on deep worldbuilding and inventive game mechanics. The same will be true of Redfall.

We wanted players to have an Arkane experience, but with the option of playing with friends this time. As a result, we thought going for heroes with strong personalities and distinctive backgrounds would make for a stronger game. We think players are going to enjoy not only the interaction of their various abilities as they fight the vampires, but also seeing their chemistry develop over time as they liberate Redfall.

Vampires are perennially fun, classical villains, because they’re ripe for every generation to reinvent and experience in a new light. In our case, Redfall vampires are science-inspired, triggered by biotech longevity experimentation.

Check out the debut trailer below as well as an overview of the game.

Once the very picture of Smalltown, USA, the island town of Redfall used to be known for its quaint streets, breezy boardwalks and charming neighborhoods. Then the vampires moved in and ruined everything. First, they eclipsed the sun. Then they started turning all the island’s inhabitants into either minions for their army… or food.

That’s where you come in. Choose from a lineup of unconventional heroes, each with their own unique abilities and specialized weaponry, and face off against the bloodsucking legions threatening the island. You can go it alone, building your chosen character around solo play, or you can select the perfect character to round out a roster of heroes in up to four-player co-op.

Redfall features a rich campaign that explores not only the story of the island and the creatures plaguing its streets, but the stories of our four heroes as well. Each hero has their own unique personalities and abilities, as well as reasons for being in Redfall and fighting to protect what remains.

Redfall’s vampires aren’t your typical bloodsuckers. They were created after a scientific experiment went horribly wrong, and they’re continuing to evolve. After their transformation, some of them develop powerful abilities and become specialized vampires like the Angler. Shown in the trailer, the Angler uses a psychic harpoon to drag you away from your team, leaving you vulnerable and alone. And that’s just one of the vampire types you’ll encounter in Redfall.
But they’re not the only thing standing in your way – you’ll also face off against the human cultists who worship the island’s hungry new leadership with the hopes of joining their ranks. These cultists have set up outposts all over the island. Clear out the outposts and you’ll make that area a little safer for human survivors.

Redfall is a co-op FPS that brings Arkane Austin’s unique DNA and love of deep, immersive stories to an ever-changing open-world setting that reacts to your choices and actions. Traverse the island, collect and customize new gear, and upgrade your hero’s abilities to suit your playstyle, whether it’s a fast and noisy “bullets and stakes for everyone” approach or something a little more subtle.