Red Dead Redemption is one of those rare Rockstar games that is highly demanded by the PC gaming populous but sadly Rockstar has been completely hush for the most part about the likelihood of the game coming to the PC. While there are strong theories to suggest that Grand Theft Auto 5 however could be headed for the PC along with the next gen consoles it seems that Rockstar could be giving Red Dead Redemption on the PC a chance at ... Redemption. 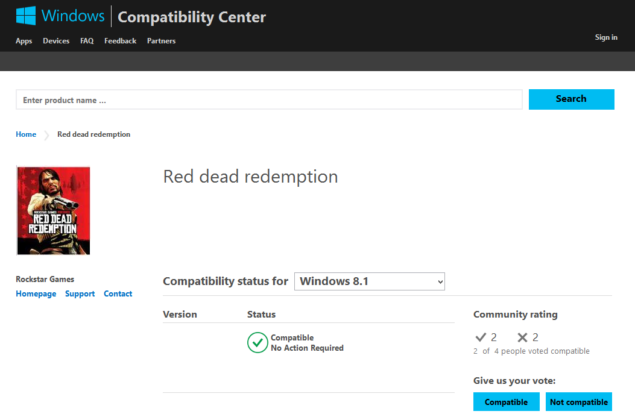 Red Dead Redemption may not have held the graphical feat or Crysis nor did it have the storytelling of Bioshock Infinite to keep the players perplexed. It was one of the few Rockstar games to actually take the players away from the modern setting of open world games with their first experiment being Red Dead Revolver on the PS2 but that game was a really limited open world experience when we compare it directly to Red Dead Redemption.

Maybe something changed somewhere down the line and now Rockstar must have had a change of heart towards their sentiments for having Red Dead Redemption on the PC, Perhaps they managed to optimize it or port it over with the help of an improved engine? The same engine that will be used to supposedly bring GTA 5 to the next generation consoles?

You can view the listing of the game by going Here

The Homepage, Support and Contact buttons below the game cover all redirect the user to Rockstar's Website, meaning that the listing appears to be genuine but since I don't have any familiarity with the operational background of the Windows Compatibility Center I really can't be sure whether these are genuine or not.

Red Dead Redemption For PC would definitely be a dream come true for many fans. Considering how Games for Windows Live has now been done away with and many developers are now inclined towards giving their loyalty and business to steamworks, I can easily say that Rockstar implementing steamworks and steam workshop with Red Dead Redemption is just a money making machine ready to happen!

Despite all the strong evidence I would still take this with a HEAVY pinch of salt and be cautious. The last thing we need is getting our hopes up for nothing, but let's also have a little bit of optimism reserved in the event that this proves true.

One thing to note however is how the game is typed out as Red dead redemption instead of Red Dead Redemption. That COULD be a red flag, but then again, it could be anything.

UPDATE: The dream is over, the listing is false 🙁 Link.