It goes without saying that the iPad is an amazing tablet. Since it's first model came out in 2010, the iPad has sparked the tablet revolution we very well know of today. This tablet is used for a variety of purposes, including but not limited to sending emails, browsing the web, using amazing applications, taking pictures and recording videos, etc. Now thanks to the new SloPro app, you can record super slow motion video on iPad as well as other compatible iOS devices. 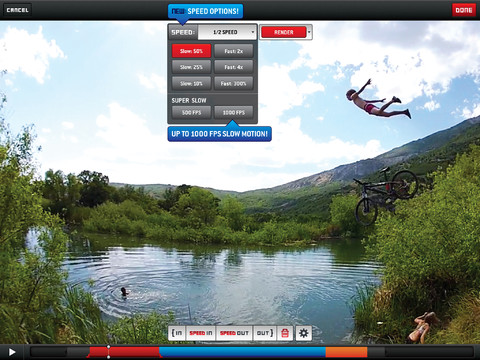 SloPro was initially released for iPhone and iPod touch devices. Today's massive update brings a ton of new features as well as native iPad support. The app is now a universal binary, meaning that it comes with native support for all supported iOS devices. Furthermore it now brings the ability to record super slow motion video at an eye watering 1000 frames-per-second.

This app is amazing for those who want to record slow motion video easily without having to buy sensitive and expensive specialized equipment. You also get the long end of the stick if you are a proud owner of an iPhone 4S with 8 megapixel camera or a New iPad with 5 megapixel camera. Both of these devices are exceptional at recording videos. Coupled with the power of SloPro app, your amateur videos can easily be turned in to slow motion awesomeness.

Version 2.0 of SloPro app for iOS comes with the following features:

SloPro is a nifty little app, weighing in at just about 7.9 MB. Certainly amazing keeping in mind the features it offers. Above all, it's a free download from iTunes App Store. All you need is an iPhone 3GS, iPhone 4, iPhone 4S, iPod touch 4th generation, iPad 2 and New iPad 3rd generation running iOS 5.0 firmware or higher. Download away today!