The PlayStation Blog has revealed some new information regarding the Ratchet & Clank movie, as well as the game developed by Insomniac games, a re-invention of the original Ratchet and Clank that ties in with the events of the movie.

Hey everyone! One of the most asked questions I get as an Insomniac is, “When is Ratchet & Clank going to be made into a movie?” Today, it is with pride I get to offer an answer. Last year at E3, we gave the world a first look at the feature film debut of Ratchet & Clank and we’re back today to share some more exciting news.
You may have seen the star-studded voice cast announcement this morning, but we are also thrilled to announce the Ratchet & Clank movie will be released in US theaters nationwide on April 29, 2016, with Focus Features (The Box Trolls, The Theory of Everything, Dallas Buyers Club) handling the US distribution of the film. 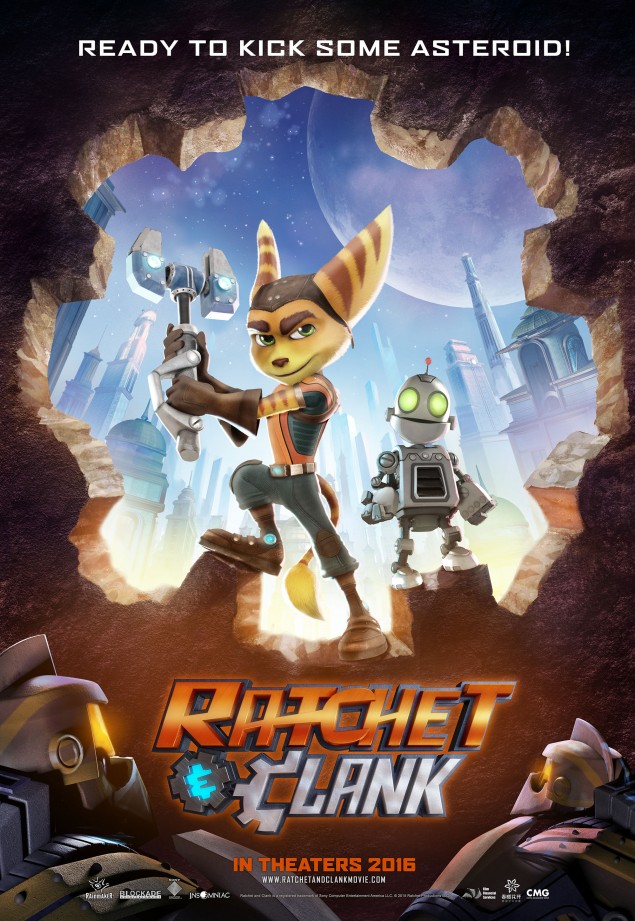 Rest assured the voices you’ve come to love for Ratchet, Clank, Nefarious and Captain Qwark will also be back, voiced by the same actors as in the games. Observant fans may also spot a few special cameos throughout the film.

As you can imagine, when Insomniac learned we had a real shot to bring Ratchet & Clank to the big screen, we jumped in enthusiastically to help ensure the most authentic and high-quality production. We collaborated extensively on original script development with former Ratchet & Clank scribe TJ Fixman, and character design and creation with Insomniac veteran artist Dave Guertin (responsible for Ratchet and Clank’s original design) and Greg Baldwin (responsible for character, weapon, and vehicle designs too numerous to mention). Insomniac animation guru David Hancock assisted with animation consulting, and North Carolina studio director and Ratchet & Clank “OG” Chad Dezern participated in lighting reviews. The fearless Chris Carter and the inimitable Brian DiLucente helped with asset sharing across production studios, and I’ve been lucky enough to ride shotgun the whole way.

Insomniac Games is also hard at work at Ratchet & Clank for the PS4, a re-imagination of the original game that started it all 13 years ago. The game which will be out in Spring 2016, re-tells the origin story that ties in closely and expands upon the movie’s narrative. It also features several new levels along with reimagined classic locales like Metropolis, brand new weapons and completely redone visuals made possible by the power of the PlayStation 4.

While you might have to wait a bit longer than expected, rest assured we’re using the time wisely to further polish the game to a spit-shine level, with dazzling shader response, awe-inspiring effects, velvety smooth animations, and spectacular new gameplay segments. Really, we can’t wait to show it to you.
Even though the game and film won’t launch for a bit, you’ll see news about them crop up throughout the year. Stay tuned!

It certainly is quite disappointing that Ratchet & Clank is delayed to Spring of next year. It was one of the most interesting PS4 exclusives to come out this year, especially considering that Sony's biggest exclusive, Uncharted 4 was also delayed to 2016.

While E3 2015 will surely be one exciting time for PlayStation owners, as some amazing reveals and announcements are coming, it appears that all we will be getting this year are trailers and gameplay footage, with most games releasing in 2016 or later.