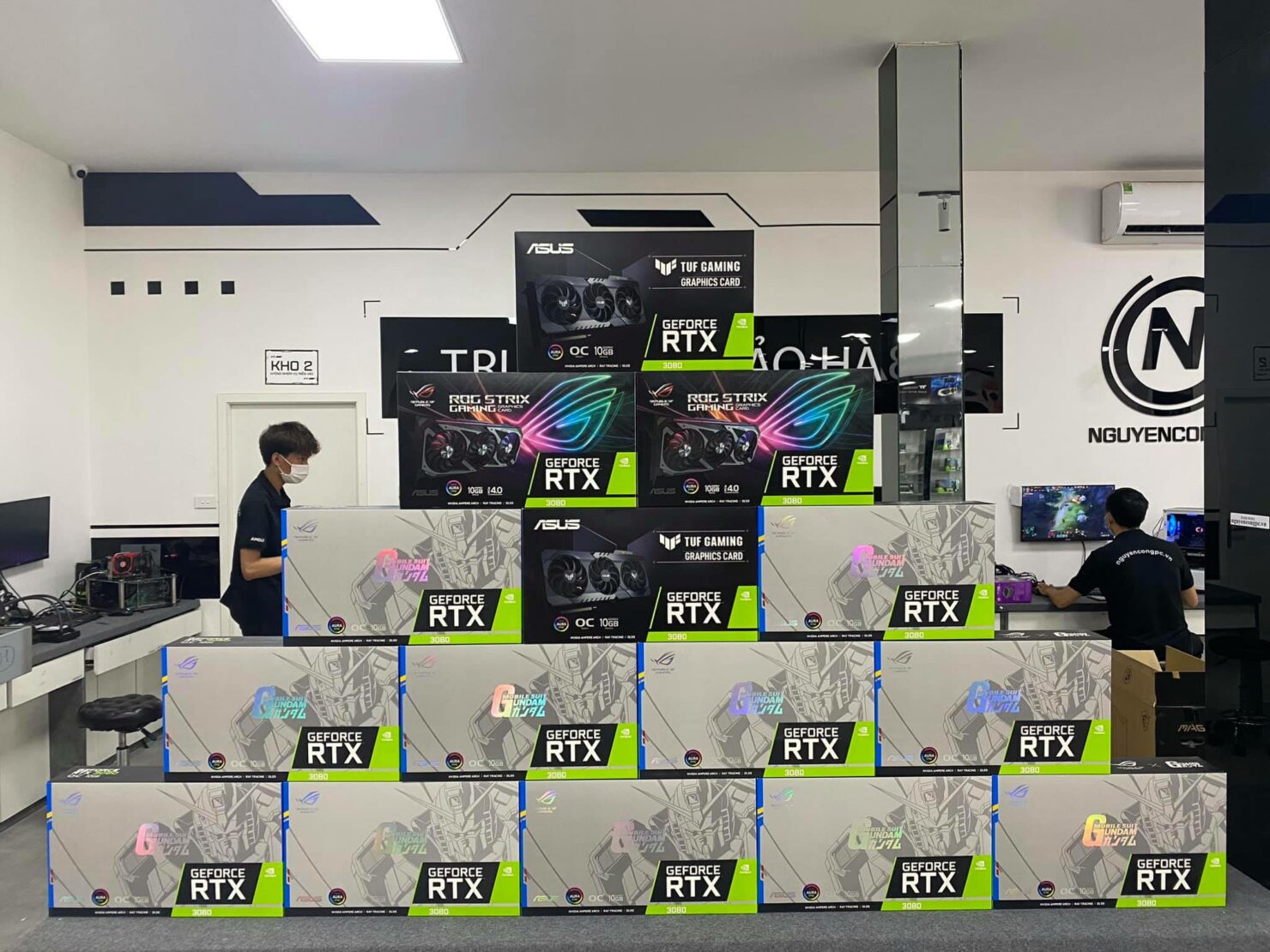 With NVIDIA introducing LHR cards, non-LHR variants have been going up in value (the price hike has been largely correlated with mining performance and ROI of the GPUs) and one Vietnamese retailer is actually selling incredibly rare ASUS GUNDAM RTX 3080 GPUs in a pre-built mining configuration for an obscene MSRP (Nguyenconpc via I_Leak_VN via Videocardz).

This story is particularly impactful because the cards in question are none other than ASUS' anime-inspired limited-edition series called GUNDAM. You can probably find one of these for around 2312 USD on ebay and while they were originally meant to be a collector's item they are actually ending up in prebuilt mining rigs. Considering the fact that these cards are almost impossible to find and ASUS only sent a few shipments to North America, it is hard to believe that these retailers would have received these cards without AIC involvement.

The single consolation is that with Ethereum's shift to Proof of Stake mining upcoming this year, it is the beginning of the end for GPU mining. While miners will almost certainly shift to other coins, in a few years, most legitimate cryptocurrencies will have moved to staking - eliminating the need for power-hungry GPU mining. This combined with NVIDIA's push with LHR cards means that gamers should actually have access to affordable GPUs before the year is over.

China is a huge global market and the crackdown there, coupled with NVIDIAs introduction of LHR cards and the global cryptocurrency slump seems to have created the perfect conditions for a GPU price crash. As per data published by 3DCenter, prices in germany are down by almost 50% over the peak in May. On May 21, some cards were selling for as much as 304% the MSRP but have since crashed to a relatively more palatable level of 150%. In other words, prices of GPUs have basically halved there.

Retailers in the US, like Newegg and Amazon are currently showing no signs of a slump but since the global markets are connected - it is almost inevitable before arbitrage forces US markets to copy German and Chinese markets. Prices in countries like Pakistan, which made headlines due to their exorbitant price scalping direct from AIBs like Palit, are also showing a major price depression in the 20% range with the RTX 3080 Ti available for 300,000 PKR (1898 USD) (or 158% the MSRP) down from the standard 200-300% MSRP price gauging. Cards in second hand dealing forums are already down to 140% MSRP and still falling.

It seems to be inevitable now, barring a huge cryptocurrency comeback (I am looking at you Bitcoin and Ethereum), that the US markets are all set for a huge GPU price crash. Scalpers on Amazon have already reduced pricing of the RTX 3080 Ti from $2999 ( a ridicolous 250% MSRP) to a very slightly better $2499 (200% MSRP) since the start of June.