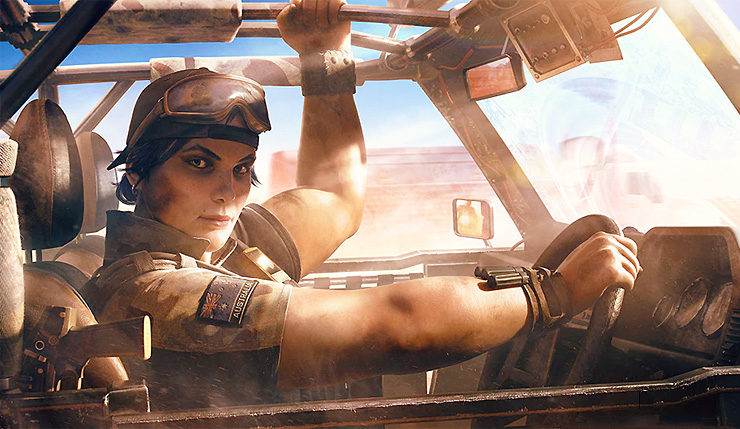 Over the past couple of weeks, Ubisoft has been gradually doling out details on Rainbow Six Siege’s latest season, Operation Burnt Horizon, but now they’ve fully pulled the curtain back. They’ve released a meaty gameplay video, which showcases Burnt Horizon’s new Australian Operators and Outback map. Check out Gridlock and Mozzie doing their thing, below.

Gridlock bolsters the attacking team’s area denial capabilities with her Trax Stingers. Throw one on the ground, and it immediately starts deploying clusters of Defender-damaging spikes in a radial pattern. Each Stinger produces quite a lot of spike clusters, allowing you to really jam up a staircase or a hallway, or cover a large area of a room. Attackers can traverse the spikes without hindrance, but Defenders who dare to tread on them will take damage, be slowed down, and make noise. Trax Stingers allow Gridlock to obstruct flanking routes, or surround a planted defuser with a defensive perimeter. Toss a Trax Stinger through a hatch or between floorboards to exert some pressure from above, or lob one into an area where you know a Defender is hiding to put them in a prickly position.

And here’s everything you need to know about Mozzie’s Pest Launcher:

Mozzie’s trusty Pest Launcher can hack the Attacking team’s drones and make them his own. Yes, this includes Twitch drones. He can capture them in two ways – 1) Shooting a Pest directly on to a drone. 2) Shooting a Pest onto a surface and creating an ambush. Each Pest can hack one drone and add it to Mozzie’s fleet. Once a drone is hacked, Mozzie is free to do drone things, like drive, jump, use shock charges, tag enemies, and park it in sneaky spots. He can’t pick drones up, and if he drives one outside for more than a few seconds, he’ll lose the hack and the drone will be lost. Each drone Mozzie keeps in play is a valuable new intel source that joins the Defender camera feed for all to see.

Ubisoft has also revealed some of the content and changes on the way in Rainbow Six Siege Year 4. If you’ve got a few minutes to spare, you can get all the details via the dev diary below.

Rainbow Six Siege Year 4 will include the usual eight Operators – Season 2 will add Operators from America and Denmark, Season 3’s new faces will be from Mexico and Peru, and Season 4’s will be from Kenya and India. We won’t be getting any fully-original maps after Season 1, with Ubisoft reworking a number of maps instead, specifically Kafe (Season 2), Kanal (Season 3), and Theme Park (Season 4). Here’s the full roadmap for you to peruse. 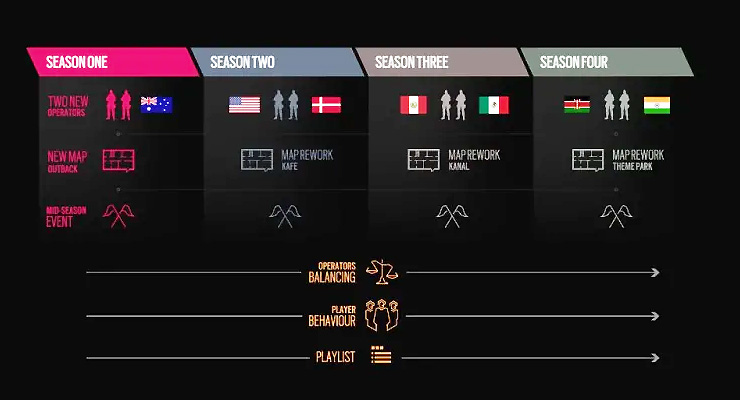 In addition to the new content, Rainbow Six Siege will be introduce a new anti-team-killing system (basically, if you try to kill a teammate, all the damage is transferred to you), more limited-time events, and a new beginner playlist. Sounds like the RSR team is keeping busy – in order to keep up with it all, the team is splitting into individual “cells,” each with its own responsibility (Operators and balance, playlists, events, and player behavior and toxicity).

Rainbow Six Siege is available now on PC, Xbox One, and PS4. A release date for Burnt Horizon hasn’t been announced yet, but expect it to hit test servers soon and go wide in a few weeks.