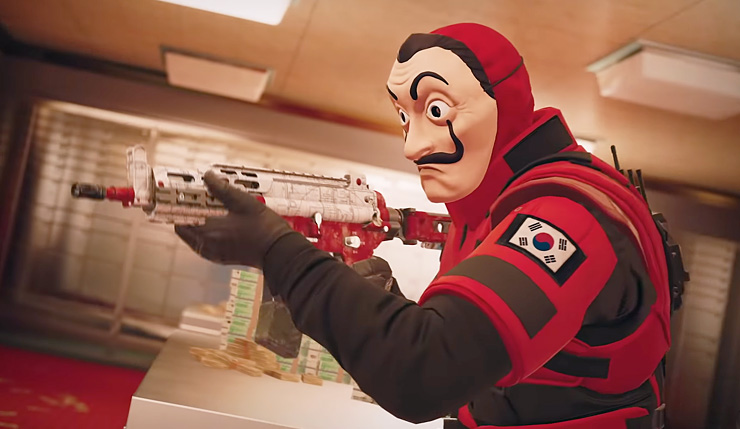 Rainbow Six Siege’s latest limited-time event kicks off today, and this one’s a bit of an unexpected crossover wit the Netflix series La Casa De Papel (or Money Heist in the English-speaking world). For those who haven’t watched the show, Money Heist is the ultra-detailed account of the planning and execution of a hostage taking and robbery at the Royal Mint of Spain in Madrid. So, as you would expect, the Money Heist event revolves around a hostage scenario in Siege’s Bank level. You can check out a quick trailer for the Money Heist event, below.

Here are a few more details about the event:

Rules of the Heist

The Casa De Papel event is a classic Hostage match, where Attackers and Defenders must fight over a Hostage dressed in the series’ iconic mask and red jumpsuit. Hibana and Vigil are also equipped with the same look, should you pick them to play with.

A full set of four items for both Hibana and Vigil will become available for purchase in the shop during the event and will be there for approximately a year. Hibana’s Heist Bundle contains the Red Jumpsuit uniform, Emboldened headgear, Tokyo charm and Regal Mint weapon skin for the TYPE-89. Vigil’s Accomplice Bundle includes the Red Jumpsuit uniform, Nameless headgear, The Surrealist charm and Fresh Paper weapon skin for the K1A.

Rainbow Six Siege will also be free-to-play this coming weekend (November 21 to 24). Those who try the game out will get access to all its content, and if you want to permanently add the game to your collection, it will be 70 percent off for the weekend.

Rainbow Six Siege is available now on PC, Xbox One, and PS4. The Money Heist event runs from November 20 to November 25. The game will also be launching its Shifting Tides season soon – get the full lowdown on what that will include, right here.