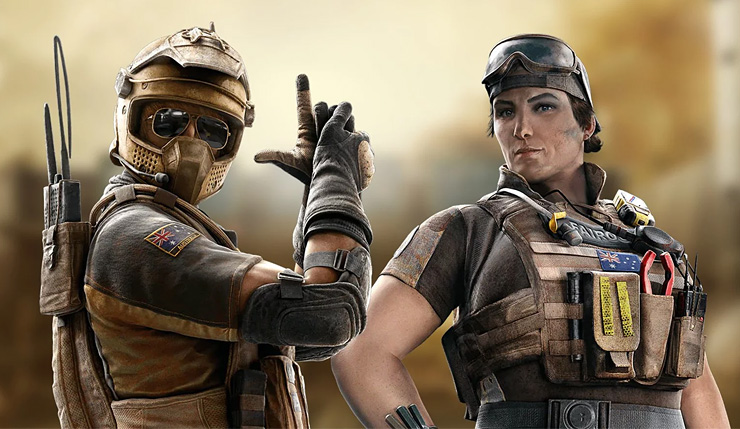 Last week Ubisoft officially announced Operation Burnt Horizon, the Australian-set first season of Rainbow Six Siege’s fourth year of content, and now they’ve released a teaser trailer and details for new characters Gridlock and Mozzie. You can check out a quick cinematic teaser for the two Australian SASR Operators, below.

A farm girl from Central Queensland, Tori “Gridlock” Tallyo Fairous learned from an early age that the best way through any hardship is with the help of family. Years spent running the family cattle farm honed her natural leadership skills, but her preferred method for dealing with problems is to get stuck into them herself and to ignore the inevitable paperwork that piles up afterward. Suffice to say, taking on a more formal role as an officer in the SASR hasn’t been one of her top priorities, despite the many attempts made to promote her. Gridlock will be deploying her Trax Stingers – originally designed to stop pursuing vehicles in their tracks – to add a new dimension to her team’s control of their surroundings.

And here’s the lowdown on Mozzie:

Max “Mozzie” Goose is affectionately known as a “show pony” and there’s no mistaking when he walks into a room. He can talk for hours about the wild stunts he’s pulled… But at the end of the day it’s his exceptional work ethic and ability to integrate with any team – as well as his unnecessary yet spectacular derring-do – that made him a candidate for Rainbow. Mozzie will deploy his Pest to make the enemy think twice about their intel gathering strategies.

Year 4, Season 1 will also come with the usual array of balance changes. Here’s what to expect:

Rainbow Six Siege is available on PC, Xbox One, and PS4. More information about Operation Burnt Horizon will be delivered during the Six Invitational in Montreal on February 17. The Y4S1 balance update is currently available on PC test servers.