14nm On Smartphones This Year? Qualcomm’s Roadmap For 2015 Leaks With SIX New Chips

As we get into 2015, one of the world's leading SoC manufacturers, Qualcomm seems to be in troubled waters as it may. The company's top of the line Snapdragon 810 has been facing numerous, reported delays that are also reported to be behind the delayed launches of several flagship Android smartphones this year. But these delays haven't stopped the manufacturer from thinking into the future it seems. Today, courtesy of @leaksfly, Qualcomm's entire SoC roadmap for 2015 seems to have been leaked, and it looks to have some very impressive products under the hood. Looks like the SoC giant has 6 new chips for us this year, and they're more impressive then what we'd thought of previously. 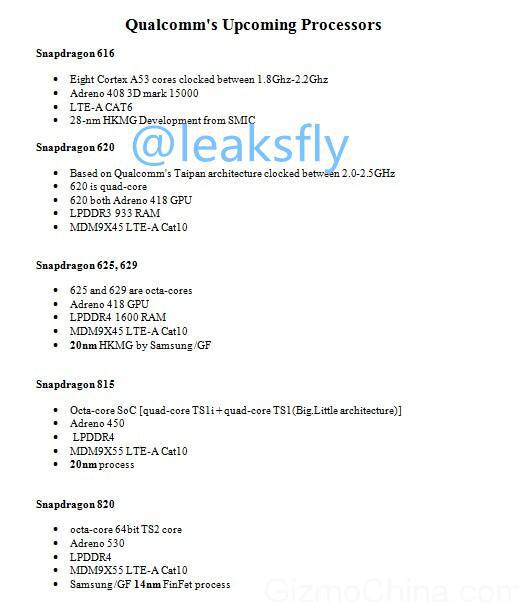 The jewel in today's leak's crown is undoubtedly the Snapdragon 820 with eight , which will be the successor of the delay wrought Snapdragon 810. The defining feature of the Snapdragon 820 is Qualcomm's seeming transition to 14nm FinFet for its upcoming top chip. If true, this introduction would once again solidify Qualcomm's lead in the mobile SoC world, given that no other manufacturer is currently manufacturing their components on Samsung's and Global Foundries' FinFet process.

For comparison sake, Apple's A8 and Samsung's Exynos 7 Octa both use 20nm for their processes. 14nm will also see the Snapdragon 820 feature massive power efficiency and much improved application performance. The Snapdragon 820 will also come featuring an all new Adreno 530 GPU, support for LPDDR4 and LTE-A Cat 10 Modem.

In addition, it also looks like 2015 is the year of the octa core for Qualcomm, with three more octa-core chips under the works. These, as can be seen above are the Snadragon 616, 625 and 629. These, coupled with the Snapdragon 620 will most likely be mid-ranger chipsets and will be coming with the less powerful Adreno 408 and 418 GPUs.

An interesting development when it comes to the Snapdragon 620 however is the presence of Qualcomm's own Taipan architecture with clock speeds ranging between 2.0 - 2.5 GHz. Other specification for the SoCs include MDM9X45 LTE. A Cat. 10 modems for the Snapdragon 620, 625 and the 629.

Surprised? Given the state of things in the mobile SoC world, with Apple's introduction of the A8 and the A8X last year and Nvidia's followup with the Tegra X1 this January, it should come as know surprise that Qualcomm is hard at work to keep its position in the mobile chipset market. Nevertheless, while the leak does provide some very interesting and impressive products, it should be taken as a leak until more details surface. For now, we'll just hope that Qualcomm gets over the production hurdles its facing with the Snapdragon 810 and we finally get to see it in this year's flagships. Cheers.