PS4 vs Xbox One Durability Test: Which One of the Latest Consoles Can Last Longer?

You can find numerous detailed reviews and comprehensive buyer’s guides for the latest PS4 and Xbox One consoles on the internet right now, but I’m pretty certain most of them miss out on one fairly important detail; how durable are the eighth generation home consoles and which one of them can survive some serious as well as tame drops that one may experience in day-to-day use. To help you out with this one, here is a PS4 vs Xbox One durability test video showing how the latest consoles hold up against each other in surviving some harsh drops. 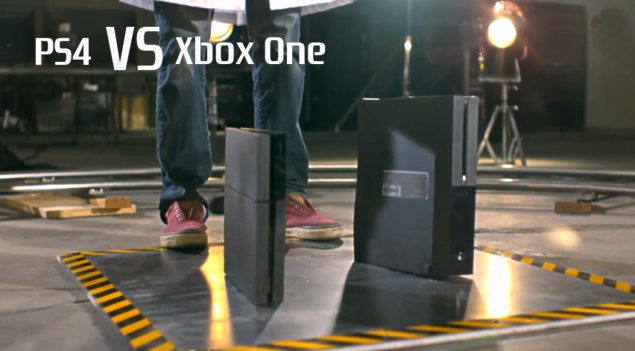 Sony and Microsoft just got done with celebrating the first anniversary of their latest eighth generation video game console, and with both of them being one year on major markets, the PS4 is leading the sales charts from all the way back. Sony’s home console even outshines the Xbox One performance wise, and boasts better form factor and built aesthetics, however, if put up against Microsoft’s console in a straight-up fight for survival, would the PS4 win the competition? A recent torture test suggests the answer is a straight no.

To check how tough the latest consoles are and how far they can go before giving up after getting dropped from certain heights onto solid concrete, WIRED’s Battle Damage conducted a durability test (otherwise known as torture test) that pits the latest PS4 console versus the Xbox One. During the test, both the eighth generation video game consoles were dropped from increasingly higher positions and were tested after each drop to see if they were still functional. The losing device was subjected to get a special chainsaw treatment.

The first drop was from 5ft, and while PS4 seemed to struggle more, both the consoles survived and Xbox One booted up just fine while the PS4 ran a Safe Mode diagnostics check before starting functioning normally. The prominent thick body of Microsoft’s new hardware proved beneficial in the second 15ft drop, and Sony’s machine lost the challenge by refusing to boot up. Of course, the PS4 then faced the wrath of the chainsaw while the solid, bulky Xbox One sat on the desk running smoothly.

You can check out the PS4 vs Xbox One durability test below: