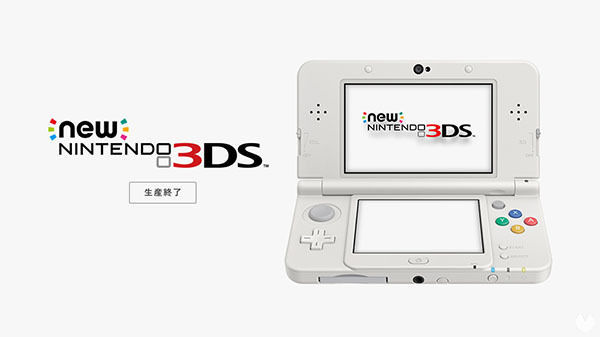 Nintendo keeps discontinuing its systems. This time it is the standard version of the New Nintendo 3DS, a console that just stopped production in Japan.

The company simply put a small announcement on the Japanese product page. Without saying much more, the Nintendo website mentions that the production of the New Nintendo 3DS is ending, so it's time to look at another console.

The New Nintendo 3DS was released in late 2014 in Japan and in early 2015 it was available in North America. This was the 4th version of the line of consoles and had a better processor, an extra stick (C-Stick), a couple of additional buttons (ZR and LR) and NFC technology to recognize amiibo figures. The console was very popular during the launch of Super Smash Bros. for 3DS.

This decision does not affect the production of other models of the 3DS family, such as New Nintendo 3DS XL or New Nintendo 2DS XL.

However, the reign of the portable console is far from over. Nintendo continues to drive sales of the New Nintendo 3DS XL and later in this month, the new member of the family will launch. We are obviously referring to the New 2DS XL, a system that lacks stereoscopic 3D but includes all the virtues of previous systems.

The latest financial report from Nintendo revealed that the 3DS family had dispatched 66.12 million units until March 31. With these figures, it seems clear that the company has no plans to abandon its portable handheld, even taking into account the launch of Switch.

We do not know if the company will also discontinue the New Nintendo 3DS in America, so we will have to wait for more details on that front.