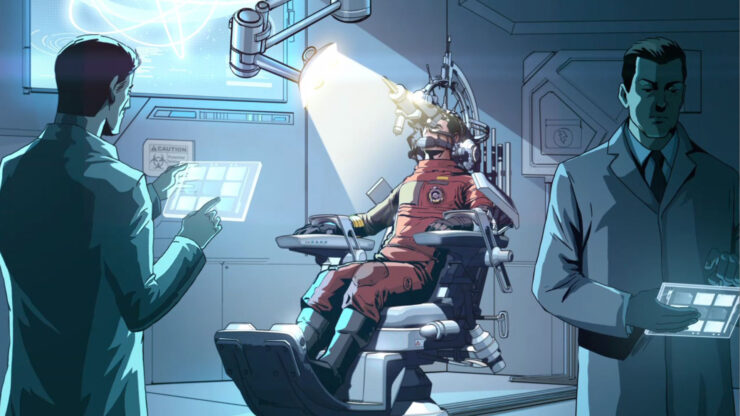 Learn the dark history of Talos I in the latest trailer for Prey. Bethesda Softworks released a new video explaining the story behind the Talos 1 facility, where Arkane Studios' psychological first-person shooter Prey takes place.

The trailer description below does a decent job of setting up the retro-cartoon styled trailer:

In the alternate future of Prey, President Kennedy survives the assassination, which sets off a turn of events leading to the central conflict. After recovering from the attempt on his life, Kennedy threw his nation further into the space race by taking control of a U.S./Russian joint program and transforming a Russian satellite into a fully functional R&D facility meant to study non-terrestrials. This facility later became Talos I, a highly advanced space station owned by the TranStar Corporation.

Players in Prey control Morgan Yu, who wakes up on space station Talos I and has to brave the alien menace known as the Typhon that completely overrun the station. It's your job to survive and figure out exactly what the who they are and what they want. I should mention that Morgan has been imbued with mysterious alien powers. I guess you'll need all the help you can get when dealing extraterrestrial beings of unknown origin and trying to save humanity at the same time.

Personally, I'm a sucker for any alternate history takes. This one in particular about Kennedy surviving his assassination and then escalating the space race between the United States and Russia sounds awesome. While this isn't exactly Prey 2, I'm curious to see where this direction for this Prey reimaging goes; then again, that's exactly the point Bethesda's VP of Marketing Pete Hines made when he mentioned that as long as Arkane's game turns out to be great, no one will complain anymore of Human Head's Prey 2 cancellation.

Prey, which is powered by Crytek's CRYENGINE, is expected to launch next year on Xbox One, PlayStation 4 and PC. Last week, it was revealed in a trailer that players will be able to choose the gender of main character Morgan Yu.