Thermaltake have now announced a new CPU cooler for up to a TDP of 240W!  By the name of Frio OCK, it looks like a pretty well built cooler and with Dual 130 mm High Pressure OC fans from 1200 to 2100 RPM, this would keep the most powerful and the hottest chips cool 24/7. One can expect what the Sandy Bridge chips will handle on this, when they can go upto 5 Ghz on air cooling, how far would they go with this 240w cooling beast! 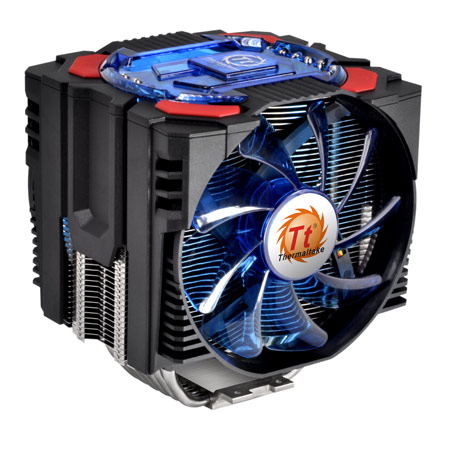 Thermaltake, leading DIY thermal solutions brand, launch their newest and up to date most powerful CPU cooler, the Frio OCK. Continuing the legacy of the award winning original Frio cooler, the Frio OCK is yet once again setting new standards in the industry. With a whooping heat dissipation capacity of 240 W this powerful cooler is clearly leading the pack. Targeting particularly power users and ambitioned overlcockers, the Frio OCK comes with six 6 mm high-efficiency heatpipes that effectively transport heat from the base into two separate cooling towers. By adopting this dual-tower design the gap between both towers increases airflow and ventilation created by the dual fans.
Frio OCK’s design approach captures and embodies currently prevailing computer game elements, in particular the shape and color scheme is resembling a firm and powerful bunker as inspired by the popular PC game StarCraft II. In doing so, Thermaltake is trying to bring virtual game visuals into every-day life, resembling a manifestation of the fictional within the real.
The dual-fan module is not only unique by its looks, but furthermore offers several practical usage advantages. Both fans are designed to work in tandem as a push-pull-combination where one fan pushes cold air over the tower fins, while the other fan on the opposite site pulls out hot air and then exhausts it through the cases back side. A convenient single fan speed control knob adjusts both fans in parallel to guarantee optimized airflow and maximize cooling efficiency. The 130 mm high pressure OC fans can be tuned between 1200 RPM for normal operation and up to 2100 RPM in OC mode and under mission critical circumstances when in 24/7 operation.
As usual with top-notch Thermaltake products, particular attention is paid to ease-of-use, convenience and an overall satisfying user experience. Therefore the Frio OCK supplies a universal installation kit which is meant to keep users future ready for current CPU sockets, including the recently launched Sandy Bridge 1155 sockets. It probably has never been easier to become a true Overclocking King in your own right.