Razer has announced the availability of a new product. The Razer™ Chimaera. This a 5.1 Surround Sound Stereo Headset that has upto an 8 hour battery back up time for wireless gaming as well as more comfortable large ear pads for use in long sessions without any compromise in comfort. Designed specifically for the XBox 360, this headset would keep you alert, even at hearing the sound of a leaf dropping on the ground. 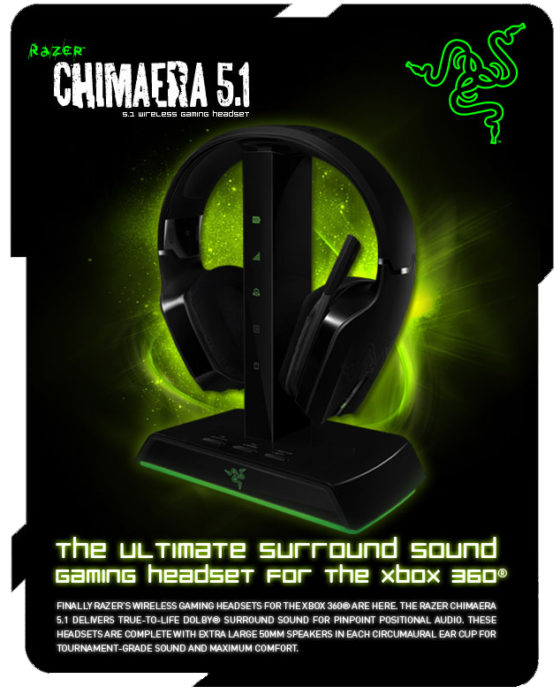 Carlsbad, Calif. - February 22, 2011 - Boom.  That’s the sound of gamers being blown away as Razer, the world’s leading high-end precision gaming brand unleashes their wireless Razer Chimaera 5.1 Surround Sound and Razer Chimaera Stereo Gaming Headsets for Xbox 360®.  Be it the explosions and gunfire in Halo, the high octane release of nitro in Need for Speed, or grooving beats on DJ Hero, the Razer Chimaera kicks Xbox gaming immersion into overdrive.

"Putting on this headset may cause serious jaw-dropping aural intensity," said Robert "RazerGuy" Krakoff, President Razer USA.  "With the Razer Chimaera 5.1, we're giving every gamer the opportunity to experience surround sound in complete wireless freedom.  We drew from our expertise in PC gaming audio and worked with Dolby® to develop a headset that lets you hear everything with absolute clarity to pinpoint enemy locations, prevent backstabs, and just take your gaming enjoyment further.  I recommend using it with the Razer Onza controller for serious Xbox ownage."

Both 5.1 and Stereo editions of the Razer Chimaera are wireless so you can hear the destruction of your opponents anywhere, be it on the couch or on the way to the fridge to get a refreshment.  With up to 8 hours battery life on the 5.1 edition and 12 on the Stereo edition, as well as extra large circumaural ear cups, your Xbox gaming marathons just got longer, without worry and in maximum comfort.  When it’s time to charge, just hang the headset onto the base station that doubles as the audio processing unit, letting you customize the game audio to your absolute satisfaction.

You and three teammates can also locally connect 4 Razer base stations for a crystal clear, lag-free, and dedicated voice channel for laughing together at the opposing team as you crush them mercilessly.

And as the icing on the cake, both editions of the Razer Chimaera are PC compatible, so you can have just as much audio fun on the PC as you will on the Xbox.