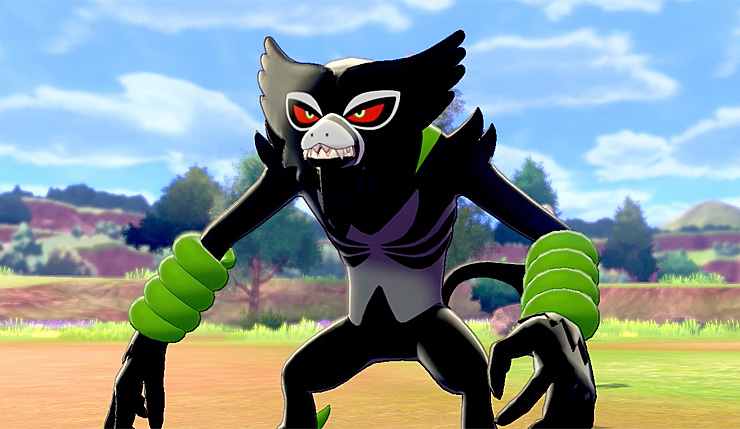 It may not be marked on your calendar, but today is, apparently, Pokemon Day, and in celebration Pokemon Sword and Shield’s first Mythical monster has been revealed! For those not familiar, Mythical Pokemon are the franchise’s most elusive and powerful critters – Mew was the first one, and there’s still only about 20 of them. The latest addition to the lineup is the rather intimidating “rogue monkey,” Zarude. Check him out in the trailer, below.

Here’s everything you need to know about Zarude:

This Mythical Pokémon lives in a pack deep in the dense forests of Galar. It treats anyone that isn’t part of its pack with immediate hostility. When fighting, Zarude swings around from tree branches, attacking relentlessly with its sharp claws. Its quick wit helps it excel in battles. Zarude is only available in Pokémon Sword and Pokémon Shield, and can’t be encountered in regular gameplay.

Pokemon Sword and Shield was on the receiving end of much controversy at launch due to its limited Pokedex. While you can only catch a select number of critters in each new Pokemon RPG, there have always been ways to import your past favorites into the latest game once you’d finished the main campaign, but that was no longer the case with Sword and Shield. That said, The Pokemon Company has announced a $30 Expansion Pass which will add over 200 new monsters. At the moment, it’s unknown whether you’ll need to buy the pass to get your hands on Zarude.

In other news, until March 1, a giant Dynamax version of Mewtwo will be appearing in co-op Max Raid Battles. Sadly, you can’t catch this oversized Mewtwo, but he should be a great challenge, and will reward those who take him down with some rare items.

Pokemon Sword and Shield is available now on Nintendo Switch.