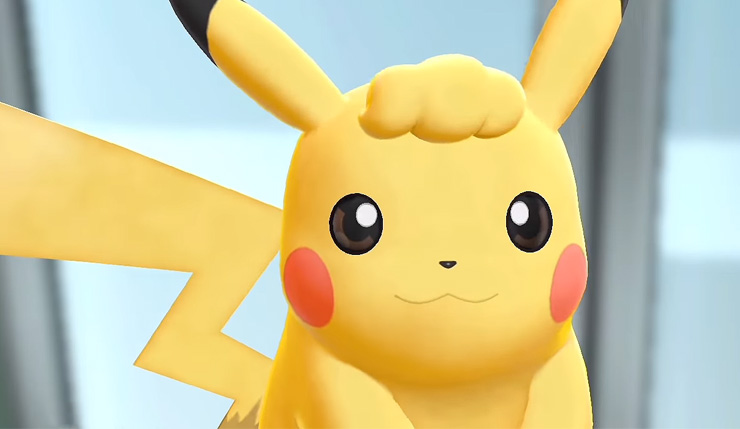 At E3 Nintendo presented rather limited demo for Pokémon: Let's Go Pikachu and Let’s Go Eevee that showed off the game’s basic pokémon capturing and battling mechanics, but, ultimately, felt a little dry. Thankfully, Nintendo/The Pokémon Company have released a new Pokémon: Let's Go trailer that focuses on the game’s characters and some of its wackier features. We get to see Brock and Misty, Pokémon riding, and Pikachu and Eevee sporting some truly dorky new hairdos. Check out the trailer, below.

Based on the classic Pokémon Yellow, the Pokémon: Let's Go games are designed to be simplified intros to the RPG genre that can be played with the novel new Poké Ball Plus controller. I got to try out Pokémon: Let's Go at E3, and walked away with a somewhat mixed impression…

Pokémon: Let’s Go Pikachu should feel very familiar to anyone who’s played a Pokémon RPG before. […] One major long-awaited improvement, is that you can now see wild pokémon on the map, allowing you to choose which ones you go after. Catching wild critters is now a simplified Pokémon-Go-style experience, although there is an additional timing element required with some pokémon moving around in set patterns. I had no particular qualms about the new capture mechanics, as having to play through a full turn-based battle every time you encounter a random wild pokémon has always been a drag.

Ultimately, what really set the Pokémon: Let’s Go experience apart was the new Poké Ball Plus accessory. No doubt, it’s a novel little item – it’s adorable, is made of super nice textured plastic, and being able to feel the pokémon you just caught move around via HD rumble is undeniably cool. That said, it isn’t much of a controller. The Poké Ball Plus only has one button and an itty-bitty, clickable analog stick, which can easily become misaligned if you don’t keep the ball oriented properly in your hand.

I’m left wondering what kind of staying power the Let’s Go games will have. They aren’t without their charms – it’s certainly nice to see Pikachu and pals in crisp HD — but I’m not sure I see myself sitting down for long play sessions with these games or devoting dozens of hours to filling out my Pokedex. But I realize these games probably aren’t being made with me in mind.

I’ll admit, seeing Professor Oak, Brock, Misty, and Eevee with a weird bowl cut has suddenly boosted my interest in Pokémon: Let's Go. Shallow? Sure, but never underestimate the power of nostalgia and cuteness.