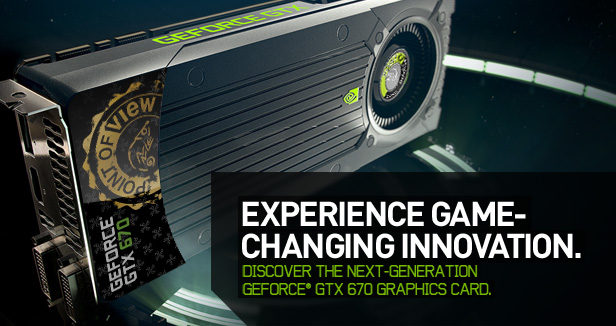 Point of View, a premier NVIDIA graphics partner and manufacturer of Android tablets, notebooks and other hardware, launches today the first card of the GeForce 600 family: the POV GeForce GTX 670. The GeForce GTX 670 is a DirectX 11 and shader model 5.0 supporting graphics card with of course existing NVIDIA features such as NVIDIA 3-way SLI Technology, PhysX, PureVideo HD and CUDA being present!

However, the real reason to upgrade to the GeForce GTX 670 is the huge jump in raw processing power. Crush all your previous performance records with an all-new monster card! The GeForce GTX 670 definitely walks in the footsteps of its’ GTX 680 and 690 brothers; performance wise and feature wise.

The key is the next generation streaming multiprocessor SMX technology. This design prides itself with an increased energy efficiency and better power management system. Thus a cooler and more stable card which can run on higher speeds!

Besides the new GPU architecture NVIDIA has introduced some ground-breaking performance enhancing features with the GeForce 600 series: