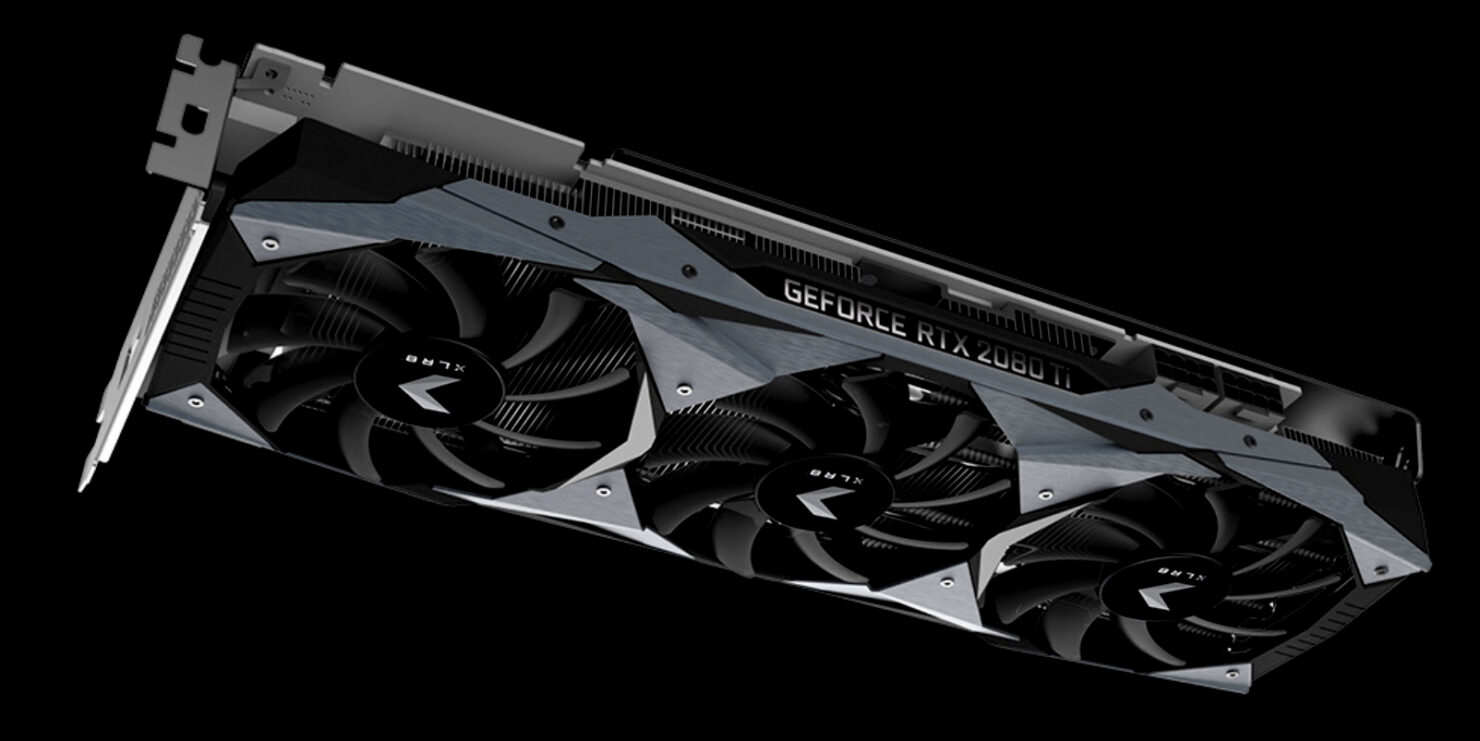 The mother of all pre-launch leaks has happened revealing pretty much anything that you could wish to know about NVIDIA's upcoming Turing series of graphics cards, courtesy of super-sleuths over at Reddit and Twitter. The NVIDIA RTX 2080 Ti and RTX 2080 specifications (including clock speeds), pre-order pricing and feature lists have been leaked courtesy of an early listing by PNY. I would still urge caution with the pre-order MSRP since this is PNY pre-order pricing and can and probably will vary wildly across AIBs but everything else is now confirmed.

The PNY GeForce RTX 2080 Ti has was listed for pre-order for $1000 USD, while the PNY GeForce RTX 2080 has been listed for $800. Before you run away with these numbers, remember that PNY lists the GTX 1080 as $699 on its website and the good ol' GTX 1080 Ti as $899. Considering other mainstream AIBs like MSI, ASUS, GIGABYTE and EVGA have an almost $100-200 USD differential between the 10-series rates makes me think that it would probably be a good idea to wait for NVIDIA to confirm this. Everything else, on the other hand, is finally fully and completely confirmed.

The pricing does tell an interesting story, however. If it is to be believed, then the RTX 2080 should be about on par with the 1080 Ti (or slightly below) while as the RTX 2080 Ti will be a bit higher. As far as we know, the manufacturer suggested non-pre order price of the RTX 2080 is going to be $649. We also expect the 10-series to get price cuts once the GPUs launch. All that said, NVIDIA recently had a stumble in their otherwise pristine earnings and Jensen will be looking to recoup that money from somewhere. Disambiguation between the RTX and GTX series is probably being done on the basis of the ray tracing core.

NVIDIA’s newest flagship graphics card is a revolution in gaming realism and performance. Its powerful NVIDIA Turing™ GPU architecture, breakthrough technologies, and 11 GB of next-gen, ultra-fast GDDR6 memory make it the world’s ultimate gaming GPU. GeForce® RTX graphics cards are powered by the Turing GPU architecture and the all-new RTX platform. This gives you up to 6× the performance of previous-generation graphics cards and brings the power of real-time ray tracing and AI to games. When it comes to next-gen gaming, it’s all about realism. GeForce RTX 2080 Ti is light years ahead of other cards, delivering truly unique real-time ray-tracing technologies for cutting-edge, hyper-realistic graphics.

Perhaps most interestingly, it looks like both the RTX 2080 Ti and RTX 2080 will have a TDP rating of 285 Watts (which explains the double/triple cooler designs) and feature "6x the performance of past generations". This is quite clearly a nod to the ray tracing performance of the cards and not to the actual gaming FPS. It also means that NVIDIA could have some very impressive software stuff to unveil at Gamescom (like a real-time ray tracing library or demo) that will complement these technical specifications.

Based on these specifications, NVIDIA's GeForce RTX 2080 Ti will have single precision compute of 13.4 TFLOPs while the RTX 2080 will have a single precision compute of 10.06 TFLOPs not counting any architectural gains. Keeping in mind that dynamic turbo boost will usually add another 100-200 MHz on top of this spec, you are looking at an additional 1-2 TFLOPs in a real-life gaming scenario. The real cherry on top is going to be the software side of things, however, which NVIDIA will reveal in less than 72 hours.

Because of the fact that the entire manual leaked online, not only do we have the final confirmed specifications of the card but we have hints to what NVIDIA will be pitching at Gamescom as well. The PNY RTX 2080 Ti (and all other AIB Tis) will feature 4352 CUDA Cores clocked at a base clock of 1350 MHz and boost up to 1545 MHz.

This number does not usually include the dynamic turbo boost of the card which usually adds an additional 100-200 MHz (in the pascal series). Considering this is a more mature version of the same BEOL as the 12nm FF, we expect the dynamic turbo boost to go even higher - meaning these clocks will probably turn out to be pretty misleading. An 11 GB GDDR6 vRAM is fed to the GPU through a 352-bit bus and the 285-watt heat dissipation of the GPU is provided power through dual 8-pin connectors. All in all, you are looking at a monster GPU that will be the undisputed king of the DIY market for quite some time now. 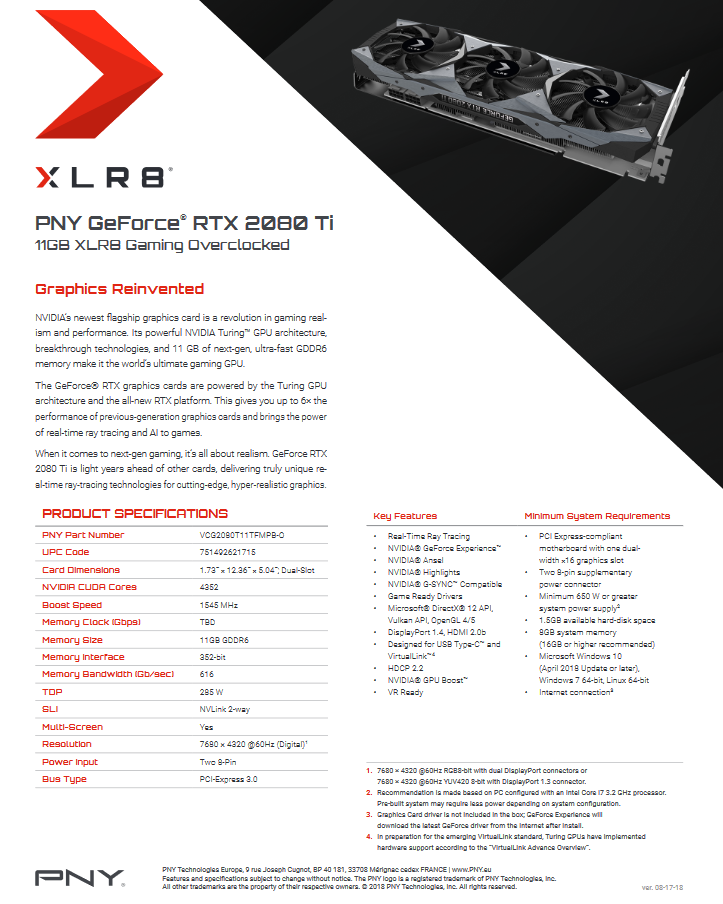 The PNY RTX 2080 (and all other GeForce RTX 2080s) will have a core count of 2944 which is clocked significantly higher than the Ti variant and will also probably be able to boost much higher. We have been hearing rumors that the cards can hit 2 GHz and the 2080 is a prime candidate for this considering its guaranteed turbo clock is 1710 MHz.

Everything else is pretty much the same, it does use GDDR6 memory and features an 8GB buffer coupled with a 256-bit bus which should be more than enough for most use cases. Memory bandwidth is 448 GBps and this particular variant features an interesting RGB based design on the middle cooler. It also features the same "6x performance improvement" claim so this is going to have the ray tracing core as well. 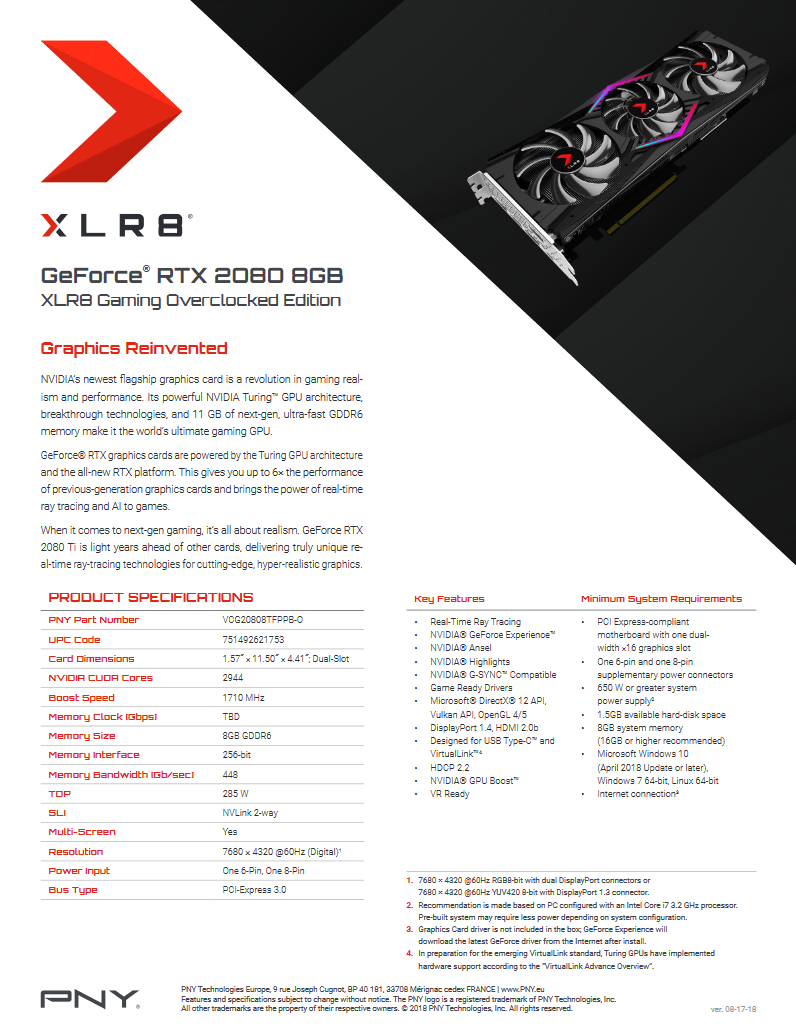