PlayStation Now, Game Streaming, Makes its Way to The PS3 Starting May 12th

Sony's game streaming service, PlayStation Now is going to be heading to the PS3 starting on May 12th. This means that you'll be able to rent games either individually or for a monthly fee to enjoy quite the large catalog of games available. 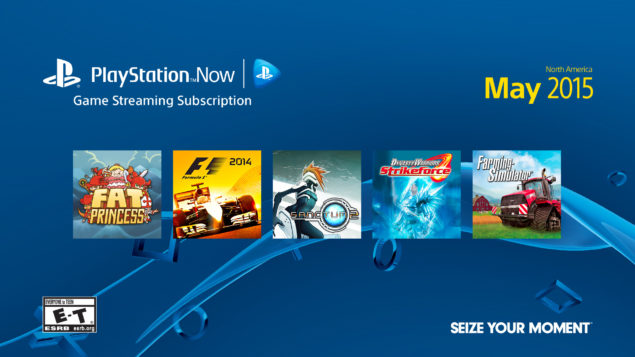 PlayStation Now is coming to the PS3 on May 12th, with individual rentals and a monthly plan.

In addition to being officially available, Sony has announced that they are adding Fat Princess, F1 2014, Sanctum 2, Dynasty Warriors: Strike Force and Farming Simulator to their already large list of over 200 games available. They are also committed to bringing new titles to the service each month. A full list of the titles available is listed below.

If you're unsure whether you'd enjoy renting and streaming games as opposed to outright owning them and having them locally installed, then you can try out the service for 7 days. If you want to commit, then you'll be able to rent single titles for 4-hours, 7-days, 30-days or 90-days. Or if you're really convinced of its utility, then you can subscribe to the service for a monthly fee of $19.99.

PlayStation Now has enjoyed a public release on the PS4 since January 13th 2015 and open beta's on the PS Vita and the PS3. Interestingly, it's also available on current model year Sony TV's, some select Sony blu-ray players and will eventually become available on Samsung TV's in the future.

Is it worth it to pay for a monthly fee to stream games? It very well could be. The $19.99/month could be one fantastic deal if you game frequently and want access to every game immediately. While modern releases aren't necessarily available on it right away, this doesn't preclude the fact that it adds a tremendous amount of value to Sony's platforms. It might not be for everyone, though. I have a feeling that it'll last a lot longer than OnLive did, however.

Since the inception of PlayStation Now it's been known that Sony is very much committed to the idea of streaming games. In fact, the inclusion of PlayStation Now on the PS3 has been part of their 10 year plan that they revealed back in 2012. They still aren't abandoning the PS3 anytime soon, and this is a bid to increase its legitimacy as a console in the modern age.