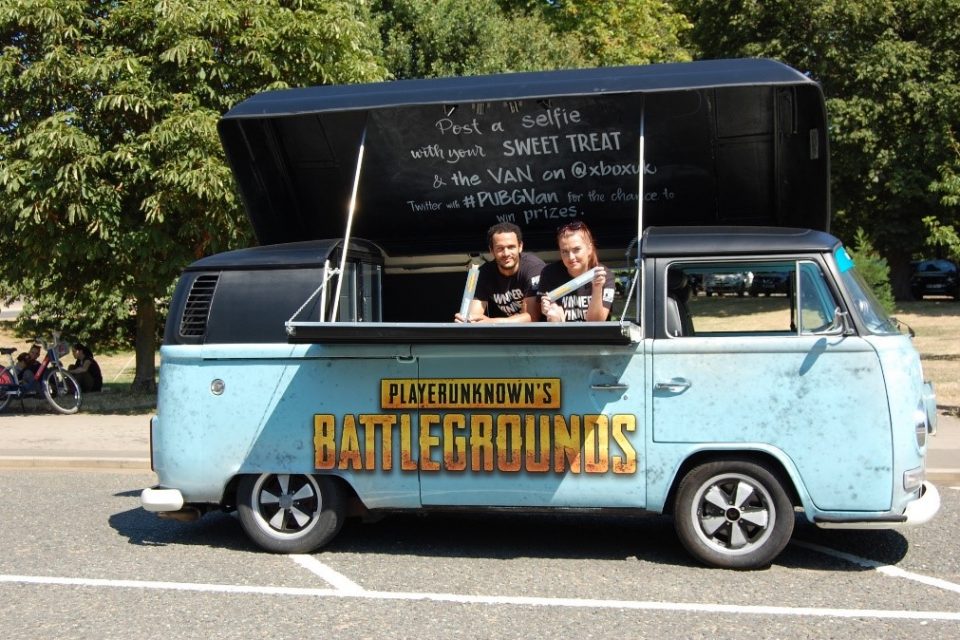 In the realm of marketing, almost anything is a possibility. Seven years ago Gearbox & 2K games thought it would be a sound idea to let people play the first six levels of Duke Nukem Forever in a strip club. Capcom set up a butchers shop in London that cut meat into parts of the human body. Ubisoft had the sound idea of delivering a suspicious, ticking, safe to a busy workplace for Watch_Dogs - needless to say, a bomb threat may not have been the best sales pitch. Fortunately, PlayerUnknown's Battlegrounds isn't going to that level of insanity.

If you're fortunate enough to live in the UK then you've got the chance to see a van from PlayerUnknown's Battlegrounds driving around the UK, handing out free ice lollies and prizes. The van will be visiting a number of major towns and cities across the country, touring the country for a little over a month. Every 100th person who grabs a lolly will also get a selection of free PUBG prizes.

From Miramar to the Midlands… here comes the PUBG Van!

Stay tuned every week to see where and when the Van is, so you can drop by, loot ice lollies and win some PUBG prizes! ?? pic.twitter.com/RsJzs7gJ4Q

Normally, this stunt would be just as insane as any of the above because here in the UK, it'd not normally be warm enough for this. Now, well people will be all over the free lollies due to the fact that the UK is in a heatwave and like the surface of the sun. To keep track of where to get your free cold treat and the chance to win some goodies, you'll have to follow Xbox UK's social media accounts on Facebook, Instagram and Twitter.

For a further chance of winning prizes, people can take a selfie with the van using the #PUBGVan hashtag. People who do this enter into a competition for the chance to win Xbox Live codes, copies of PlayerUnknown's Battlegrounds and an Xbox One X.

The official statement from the Microsoft News site states:

An iconic van from PlayerUnknown’s Battlegrounds is driving around the UK handing out free ice creams and prizes.

The Miramar “dessert” van will stop at a number of locations, including Brighton and Blackpool, where gamers can pick up a lolly. Every 100th person will also win a selection of PUBG goodies.

The Xbox UK social media accounts on Facebook, Instagram and Twitter will reveal where the vehicle is parked that day. People who take a selfie with their ice cream and the van and post it online using the #PUBGVan hashtag will be entered into a competition to win prizes including Xbox Live codes, copies of PUBG and an Xbox One X, the most powerful console ever made.

The van will tour the country until mid-September.

Just because I have to say this, I'm not entirely sure Microsoft/Xbox UK understands the meaning of the word iconic. That van is certainly not iconic. I follow the game and I wouldn't have been able to tell you that the van came from PUBG. It looks like every regular van, ever, certainly not something that a layman would immediately recognise as coming from PUBG.

Still, enjoy your ice lolly and be sure to enjoy Miramar on PlayerUnknown's Battlegrounds!