GBA4iOS 2.1 has been released and lets you play Game Boy Advanced games on iOS 10 / iOS 10.1.1 iPhone, iPad, iPod touch without jailbreak. Here's how to install it.

For obvious (and mostly legal) reasons Apple doesn't allow console emulators on iOS. But users have been able to get their fill of emulators using certain apps that can be installed outside the App Store. GBA4iOS is one such app that has seen its rise and fall from time and time again. This happens because Apple revokes the certificate required for the emulator to work. Today, we are seeing version 2.1 of the emulator surface online and it works on iOS 10 as well as latest iOS 10.1.1 release.

Instaling it is rather easy. You can kick things off by going to the iemulators.com website directly from your iPhone or iPad. Once here, tap on the Apps tab at the top, scroll down and find GBA4iOS 2.1 and tap to open it too. Install the emulator by tapping on Download Page, then Install. Once the emulator is done installing, do not launch it. Head over to Settings > General > Device Management and Trust the available certificate there. 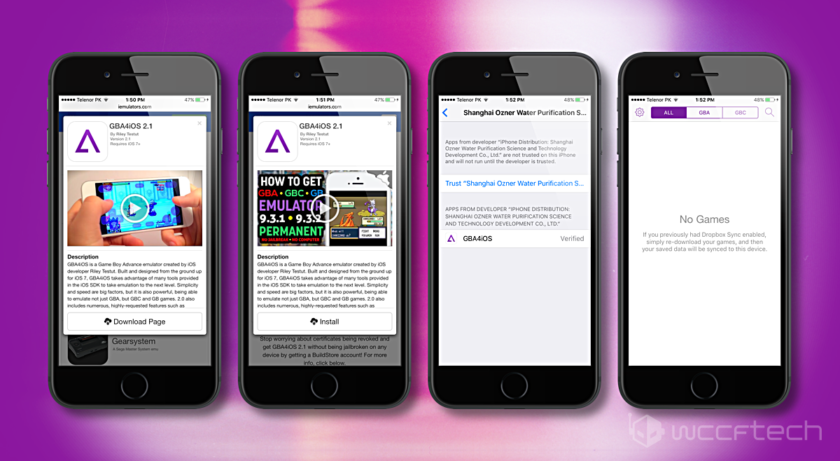 Once you are all done, simply launch the emulator from the home screen and start gaming. But remember, it's not clear when Apple might revoke the emulator's certificate, rendering it useless. But, if you go back to the download page of the emulator, you do have the option to install it using the date trick option. This is a more permanent solution and ensures the emulator sticks around no matter the changes made from Apple's end.

GBA4iOS has been retired by its developer completely and is being replaced by something brand new called Delta. Rather than being a simple emulator, it can handle SNESE, N64 as well as Game Boy titles in one fell swoop. But don't expect it to arrive any time soon though. The beta run of the emulator will kick off this month, with the final release set for 2017. It will be worth the wait, given how much it offers from the get-go.

In the meantime, give version 2.1 of the Game Boy Advanced emulator a shot on iOS 10. It doesn't require any jailbreak and works flawlessly for the time being. There's no telling when Apple might pull the plug on it so make your move now if you want to make the most out of it.