First launched exclusively on PC two years ago as a free-to-play title, Sony Online Entertainment’s massively multiplayer online first-person shooter video game known as PlanetSide 2 met with a great positive response from the community, and apparently keeping that in view, Sony is now porting the game over to its latest PlayStation 4 console. Though it looks like while aiming for full-fledged 1080p/60fps next-gen standards, console development environment is proving to be a little lean for the development team as the CPU of the latest console is snagging the process of putting more in-game activity on screen with higher frame rate. 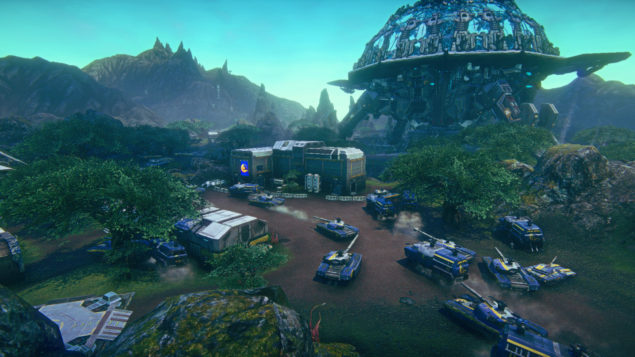 PlayStation 4's CPU is Proving to be A Bottleneck - Generally the Cause Behind Low Frame Rates, Says PlanetSide 2 Dev

Unless you don’t care about a game that you can play without paying for it on your latest PlayStation 4 console, you might know that Sony is bringing its two-year old PC-exclusive first-person shooter MMO known as PlanetSide 2 to its eighth generation video game console. Due next month, the game is still in development and the team over at Sony Online Entertainment is doing its best to provide as immersive gameplay experience to players as the one found on the PC version of the game, but it seems like working with the PlayStation 4 console is proving to be comparatively difficult.

Talking about different aspects of PlanetSide 2 on the PlayStation 4 in an interview with Eurogamer, Matt Higby, creative director of the game, pointed out an already scrutinized topic. He confirmed that while the game is being constantly optimized, real bottlenecks in the development process are proving to be on the CPU side of the PlayStation 4. GPU of the console is not much of trouble to work with and it handles the graphical aspects of the game well, but the CPU is dragging down the frame rates of the game and on-screen in-game activity and animation. He said:

“Our real bottlenecks are on the CPU side. From a graphical fidelity perspective, people will be impressed with what they see on the PS4. That’s always one of those things people are skeptical about. I see every time we post an article like this I always get called out: ‘haha, it’s bullshit he’s saying it’s going to look as good.’ It really does."

"Again, the graphical fidelity is every bit as high. The slowdowns we have are on the CPU side more than the GPU side. It’s because we’re tracking and updating so many different players moving on your screen and moving around at once. All that animation and all the audio that’s associated with all those characters running around, all of their projectiles being simulated in their client, all those things end up hitting the CPU, not the GPU."

"So, generally when our frame-rates are low, it’s a CPU problem, not a GPU problem. And that’s where we’re optimising right now, to get our CPU running faster so the game is running at a more consistent frame-rate on the PS4.”

Despite the adversities they are facing, the development team is still trying to pull out native 1080p resolution at a solid frame rate of 60 for the game. However, Higby admitted that if there’s a need to compromise and go with solid 30 frames per second, the development team wouldn’t wait long. He said:

“Right now we’re running for 1080p. We’re still trying to shoot for 60fps. We’re trying to get a solid frame-rate. So if we go to 30 it’ll be because we want to maintain a completely solid 30fps. But that’s the optimisation we’re working on right now. And we’re still grinding on it.”

So, here’s another addition to the pile of claims that suggest that the CPU of Sony’s PlayStation 4 console is weak compared to its GPU and even the CPU of Microsoft’s Xbox One console. It is clearly the reason why developers mostly have to cut frame rates on their latest games to match the level of graphics rendered on-screen. Hopefully, Sony Online Entertainment will be able to hit 60fps mark on the console with PlanetSide 2, otherwise 30fps seems a bit low for a massively multiplayer online game like this.

What do you think about the internals of the PlayStation 4 console and their role in handling the latest video games at next-gen standards? Share your thoughts in the comments section below.