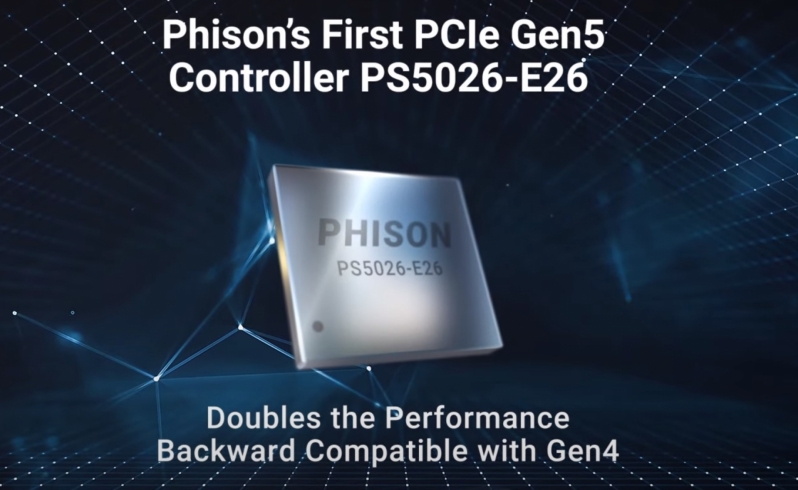 UPDATE January 5, 2022: Website TechPowerUP were able to retrieve slides from Phison's presentation, as well as product images and detailed photos of the company's new PCB. We have updated our post to reflect those inclusions.

Phison, a leader in SSD controller technology and development, with the company's controllers powering Corsair, Gigabyte, MSI, Patriot, Sabrent, and Seagate SSDs, as well as many other manufacturers, has revealed their next-gen PCIe Gen 5.0 controller offering transfer speeds as high beyond 10 GB/s.

Phison is set to release new PCIe 5.0 SSD controllers, offering amazing speed and high compatibility amongst some of the most popular SSD manufacturers

The existing PCIe Gen 4.0 standard delivers up to 16 Gbps transfer speeds, but PCIe 5.0 lanes can offer transfer rates as high as 32Gbps. With this discovery, added with the upcoming M.2 NVMe SSDs delivering 16 GB/s speeds using as many as four PCIe 5.0 lanes, this means the newest PCIe 5.0 standard will offer an amazing amount of potential for SSDs.

Phison confirmed at CES 2022 this week that they will be revealing the company's newest PS5026-E26 SSD controller, claiming power transfer speeds well beyond the 10 GB/s while still maintaining the "power requirements of all-day computing". While more details will be released by the company later this week, what the company has claimed so far is extremely surprising and enticing.

Phison Electronics Corp., a global leader in NAND flash controller integrated circuits and storage solutions, will showcase its lineup of next-generation gaming solutions for customers, partners, media and other interested parties during CES 2022, January 5-8 exclusively by private virtual demos. The new-class of solutions include the company's first PCIe Gen5 controller for high-end desktop gaming, a future high-performance Gen4 solution, and demonstration of the next-generation game workload coming soon to PCs.

Phison, the leader in gaming-optimized SSDs pushes the boundaries of performance. The company's solutions power seamless experiences for modern console, desktop/notebook and mobile gaming, which are delivered to consumers through an extensive and diverse group of partners.

The company's PS-5013-E13T BGA SSD and its planned usage in Xiaomi's Black Shark 4 Gaming Smartphone is also set to be revealed this week. This particular SSD controller is expected to deliver an increase of 69% in both reads and write performance, which should produce the ultimate mobile gaming experience currently on the market.

Highlighted gaming products Phison will preview on the virtual demos include:

The E26 SSD solution is the best-in-class combination of performance and low-power using Phison's unique architecture. E26 is a customizable SSD platform designed for PCIe Gen5 that will span enterprise and consumer markets. The company's first Gen5 controller will ship in multiple form factors and features with the ability to scale beyond 10 GB/s while meeting power requirements for all-day computing. Phison will show the E26 for the first time at CES 2022.

As for what PCIe Gen 5 SSDs bring to the table, Phison already revealed that PCIe Gen 5 SSDs will offer speeds of up to 14 GBps and existing DDR4-2133 memory also offers around 14 GBps speeds per channel. And while SSDs are not going to replace system memory solutions, the storage and DRAM can now operate within the same space and a unique perspective is provided in the form of L4 caching. The current CPU architectures comprise of an L1, L2, and L3 cache so Phison believes that Gen 5 SSDs & beyond with a 4kb cache can operate as an LLC (L4) cache for the CPU owing to similar design architecture. Expect a range of Gen 5 SSD solutions to be unveiled during CES 2022.